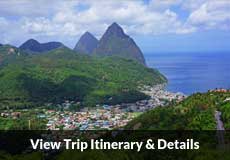 Ask a seasoned traveller, and they'll agree that Grenada is one of the loveliest environments in the Caribbean. Grenada tours showcase a mountainous island that is bordered by stunning beaches, and dotted with picturesque towns. In the interior of this volcanic island are cascading rivers and waterfalls, lush rainforests, and one of the most breathtakingly beautiful mountain lakes imaginable.

Formed by a volcanic eruption millions of years ago, Grenada tours take in the best of the natural beauty of Grenada with a stop at Grand Etang National, home to a rich diversity of plants, and a beautiful rainforest scenery surrounding the crater-formed Grand Etang Lake. Across the island are green verdant hills broken up by sparkling clean waterfalls such as the 15m (50ft) Annandale falls, enclosed in a garden of green and a wall of rocks covered in soft ferns and other vegetation.

Known as the 'Spice Island', Grenada has earned its fragrant nickname with good reason. Nutmeg, cloves, cinnamon, ginger and vanilla are just a few of the scented gems found here. This is a true island country, consisting of Grenada itself and six smaller islands at the southern end of the Grenadines in the southeastern Caribbean Sea.

Grenada's physical beauty is complemented by its rich history and vibrant, living cultural heritage. The centuries-old spice plantations and rum distilleries still use traditional methods, emphasizing quality rather than quantity.

Christopher Columbus discovered Grenada in 1498. At that time the island was already inhabited by the Carib Indians, who had migrated from the South American mainland, killing or enslaving the peaceful Arawaks who were already inhabitants there. The Amerindians called their island Camerhogue, but Columbus renamed it Concepcion. However, passing Spanish sailors found its lush green hills so evocative of Andalusia that they rejected this name in favor of Granada. Over the centuries, although control of the island passed between France to Britain, the name endured with just the slightest of alterations, changing from 'Granada' to 'La Grenade' to 'Grenada'.

Since colonization, commercial life has always centred around the port town and colorful capital city of St George. The popular market in the heart of Grenada's commercial center was once used as a place for public executions, trading slaves, and political speeches. Today it is a place for farmers and spice vendors to sell their produce.

During Grenada tours, to better understand the indigenous Carib populations a trip to the National Museum is a must. Sadly the Carib's didn't survive colonization as the last remaining Carib Natives in Grenada jumped to their deaths from a 40-meter high cliff in 1651 near the village of Sauteurs rather than face domination by the conquering French. The name Sauteurs itself is a is French word for "jumpers".

To better understand the colonial past and the historic appeal of Grenada beyond its island beauty, a visit to the nutmeg gardens and cocoa-growing region with a stop at the plantations such as the Dougaldston Spice Estate or Belmont Estate is worthy in understanding Grenada's ancestry, traditions, lifestyle, social history and plantation history.

If you thought Grenada was just an island of soft sandy beaches and green rolling hills you'd be right. But it's also a fascinating discovery of a country with a rich history worthy of exploring.