16 days from Edinburgh to Edinburgh 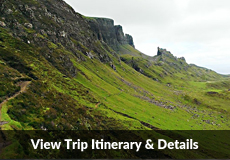 Few places in Western Europe are as rugged and wild as Scotland is. Between that unbounded beauty of the lochs and mountains are a series of small towns and enchanting cities that showcase the very best of Scottish culture.

Our Scotland tours offer a chance to visit both the modern day cities and historic landscapes found within this relatively small enclave of the United Kingdom. Made up of over 790 islands, ScotlandÃ¢ÂÂs ancient human history has been erased due to glaciation that has changed the face of this country over the past several thousand years. However, that doesnÃ¢ÂÂt mean that an ancient culture isnÃ¢ÂÂt possible to discover.

Lack of trees forced Neolithic inhabitants to build with stones, allowing the Orkneys to have more prehistoric remains than anywhere else in Scotland. Orkney and Shetland are extremely rich in physical remains of the prehistoric eras and there are over 8,000 archaeological sites. Highlights on our Scotland tours include Ring of Brodgar, a dramatically located group of 36 standing stones dating to 1560 BC and Skara Brae, a complete Stone Age town was perfectly preserved under sand dunes for 4,500 years until its discovery in 1850.

The name "Orkney" dates back to the 1st century BC or earlier, and the islands have been inhabited for at least 8,500 years. Originally occupied by Mesolithic and Neolithic tribes and then by the Picts, Orkney was invaded and forcibly annexed by Norway in 875 and settled by the Norse. Scandinavian Scotland refers to the period from the 8th to the 15th centuries during which Vikings and Norse settlers and their descendents colonised parts of what is now modern Scotland. Viking influence in the area commenced in the late 8th century, and hostility between the Scandinavian Earls of Orkney and the emerging thalassocracy of the Kingdom of the Isles, the rulers of Ireland, Dal Riata and Alba, and intervention by the crown of Norway were recurring themes. The negative view of Viking activities held in popular imagination notwithstanding, Norse expansion may have been a factor in the emergence of the Gaelic kingdom of Alba, the forerunner of modern Scotland, and the trading, political, cultural and religious achievements of the later periods of Norse rule were significant.

Across Scotland, the battlefields of the past are found in almost every corner of the country. Modern day Scots are thought of as a tartan wearing, whiskey loving folk, and their friendly reputation has spread as far in the world as Robert BurnsÃ¢ÂÂ poetry has.

On any of our Scotland tours, experiencing the natural beauty of the country is a must. The views, the atmosphere and big sky often provide an ever-changing panoply from rapid shifts in patterns of light, sun and weather on these small islands where the Atlantic Ocean meets the North Sea. Watch golden eagles soar above the Highlands, see otters, seals, and minke whales off the coast, or just watch the world go by from the shelter of a castle wall.

With so many treasures found in such a small piece of the world, it is no wonder Scotland is often on peoples must visit list.