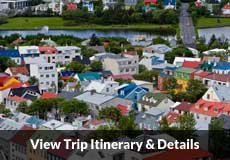 Exactly why Iceland came to have so misleading a name remains to this day a subject of contention. Some speculate that the Norseman who first set foot on the island wanted to protect its unspoiled, abundant beauty and endowed it with this foreboding name as a deterrent to other travellers.

Others hypothesize that this same Norse explorer felt so disappointed with his discovery that he coined the disingenuous name out of spite. Whatever the reason, the fact remains that the country's name is in no way indicative of the natural surroundings.

Indeed, many travellers might be discouraged from journeying to the land because its name suggests a less than hospitable location, an equal number who have explored the country on our Iceland guided tours find a highly rewarding destination, with the natural environment being the number one reason for a return visit.

Iceland does have some ice between its borders, but it comprises only about 11 per cent of the total landmass. Much of Icelandic countryside resembles sceneries you'd expect to find on the Moon more than you would on Earth and in fact, the rocky wasteland was once the staging ground for astronaut training.

There certainly is an otherworldly quality exuded by the barren and rugged territory of Iceland, on epic display during our Iceland guided tours. The green, forested lowlands see far more rain than snow throughout the year and for travellers with a passion for water, this is the place to be, with its plethora of beautiful, cascading rivers and waterfalls that sprinkle the area.

The sterling landscapes of Iceland are only enhanced by the fact that many of its abundant natural wonders are seasonal, meaning that not only can travellers experience Iceland's beauty all year round, but also that they can visit it on numerous occasions at varying times of year and each time experience something different.

For most, Iceland's world-renowned hot springs are a must-see attraction and together with the bubbling mud pools and desolate lava fields, it is a sight that shows the primordial face of this geologically young land still under construction by Mother Nature.

Just as Iceland's remarkable natural surroundings warrant thorough exploration, so too do its inhabited areas. The booming metropolis and capital city, Reykjavik, is home to over half of the people residing on the sparsely populated island and is itself an attraction not to be missed.

Here, travellers can socialize with the ever-friendly locals and discover the fascinating history and current lifestyles of these people of ancient Viking descent.

For those whoâve taken our Iceland guided tours and traveled to Greenland, question of whether their names should be interchanged might come up. Iceland, world famous for its geothermal spas, springs and geysers, displays only a slight percentage of snow and ice between its borders, where Greenland has a staggering 80 per cent of its landmass covered in ice.

Iceland spellbinds travellers with rich folkloric tradition, tumbling waterfalls and a highly unique and friendly people and Greenland makes up for its lack of typical tourism favourites, like sun-drenched beaches, with extraordinary scenic wonder and otherworldly beauty.