In his latest blog post, Dale Dunlop, The Maritime Explorer, is excited about Mosta & Marsaxlokk - two Maltese "Must Sees". If you are interested in dates and prices for this trip please check out our 6 DAY MALTA TOUR .

This will be my final post from the island of Malta which Alison and I visited recently on an Adventures Abroad tour led by veteran guide Victor Romagnoli. In the last post we visited the ancient capital of Mdina. In this post we'll visit two more of the many must see sites on this amazing little island starting with Mosta which is where a 20th century miracle took place. After that we'll spend some time in Malta's most important and colourful fishing harbour, Marsaxlokk. Please join us for yet another adventure in Malta.

The Rotunda of Mosta

If you've been following my posts from Malta, particularly those on Hagar Qim, Clapham Junction and St. Paul you'll know that this country abounds with mysteries, miracles and enigmas. Most of these are shrouded in the mists of time; so old that they defy any definitive scientific explanation. However, the first place we are headed for today is the site of a 20th century miracle whose validity is beyond doubt.

This is the Sanctuary Basilica of Our Lady of the Assumption in the small city of Mosta, population 21,000. 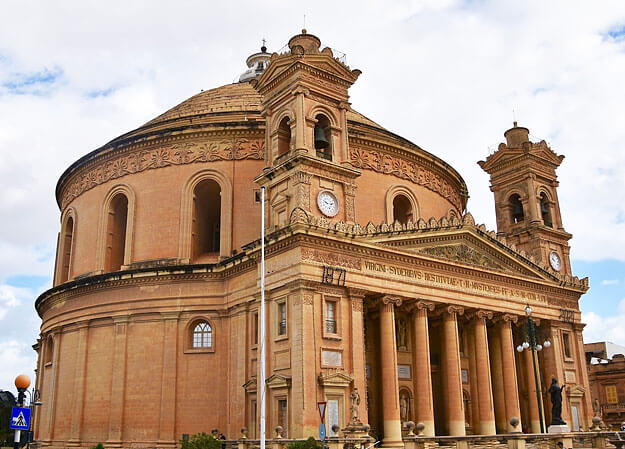 It is usually just referred to as the Mosta Rotunda and the view we had of it from the walls of Mdina made it clear why that is its preferred description. 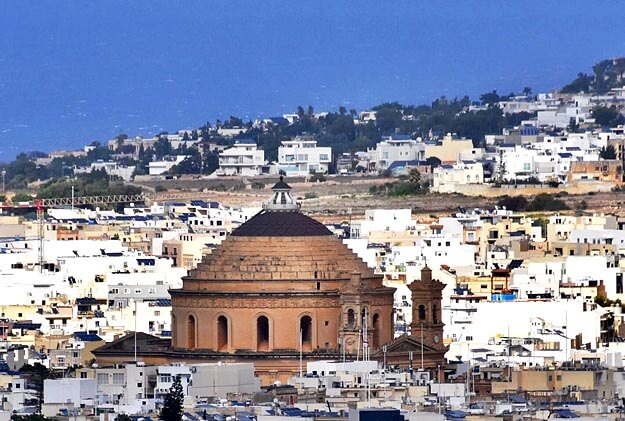 Believe it or not this church has the third largest unsupported dome in the world or so it is claimed. There seems to be agreement that the Pantheon in Rome is the largest, but I can find no consensus on the second largest, mainly because people can't agree if it is the height or the width of the dome that matters. Built between 1833 and the 1860s largely by the work of local tradesmen to a design by an untrained Maltese architect, Giorgia Grognet, it was meant to be an emulation of the Pantheon which at the time looked like this.

The Pantheon in the 19th Century

The steeples on the Pantheon have thankfully been removed and it looks as it did when first constructed by Hadrian over 2000 years ago. Steeples don't belong on pagan temples. However, Mosta's version has its own steeples as a good Christian structure should. Let's go inside. 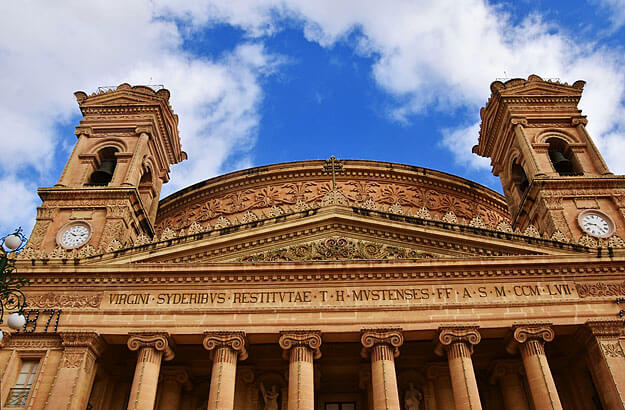 The interior is essentially dedicated to telling the story of the life of Jesus in a series of narrative neo-classical paintings each atop a portrait of a Biblical figure, such as this depiction of Jesus entering Jerusalem on Palm Sunday above the figure of Zacharias who was the father of John the Baptist. 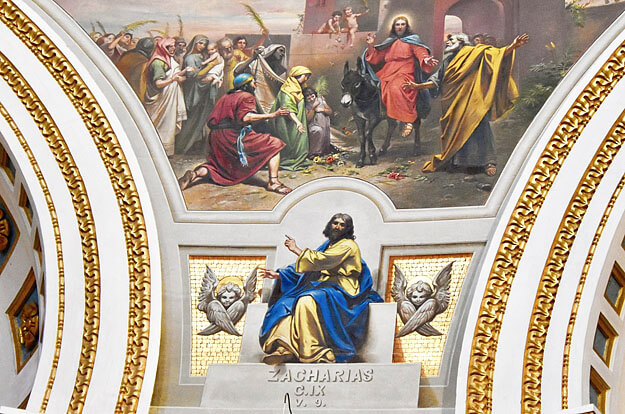 And this scene of Jesus raising Lazarus from the dead above the Old Testament prophet Ezechiel who lived at the time of the Babylonian captivity. I have to say I really enjoy this style of painting that reminds me very much of Raphael's School of Athens in the Vatican apartments. 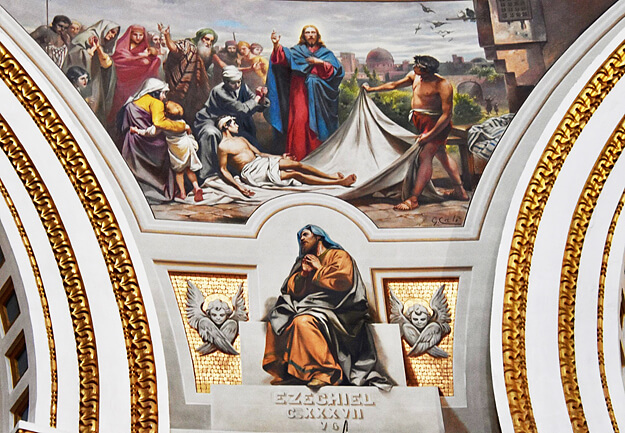 The Raising of Lazarus

The altar and apse contain a painting of the Virgin Mary's assumption with the ceiling overhead depicting Jesus, on old guy I presume is God and numerous angels awaiting her arrival. 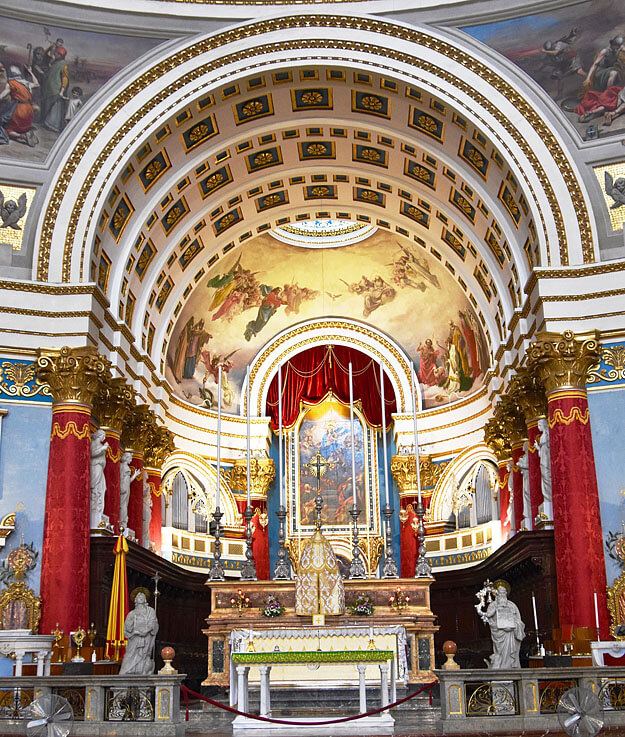 As interesting as these aspects of the Mosta Rotunda are, it is what is directly overhead that is spectacular and the site of the miracle. All I could say was 'Wow!" I'm always a sucker for symmetrical perfection and the Mosta dome hits all the right notes. It truly was a miracle that this small community in Malta could build something like this at a time when the authority of the Catholic church was being challenged across Europe and Latin America. 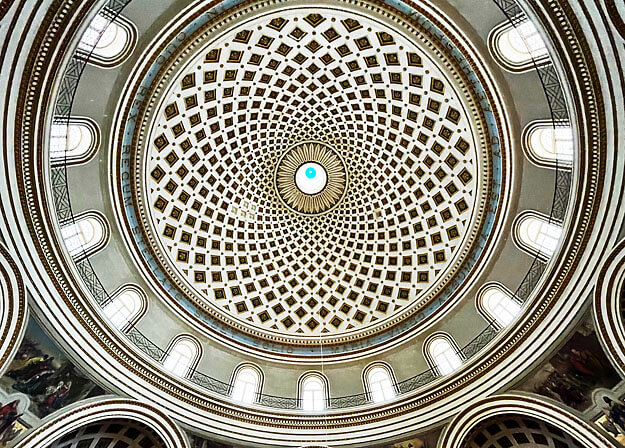 But that's not the miracle the church is famous for. If you look up at the dome at about eight o'clock you'll see five ceiling pieces that are not painted. Here's a closer look. 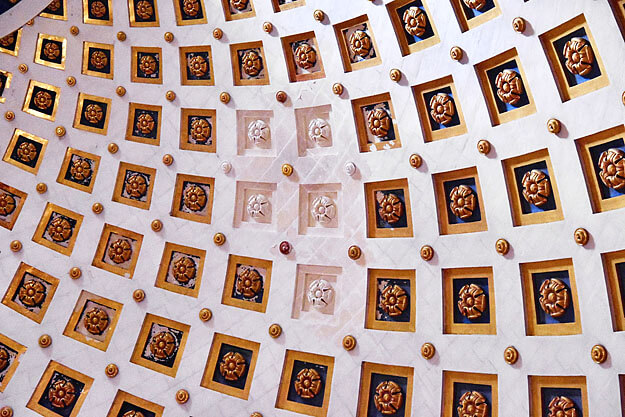 Where the Bomb Came Through

On April 9, 1942 the German Luftwaffe was doing its part to earn Malta the title of 'most bombed place on earth' when somewhere between 250 and 300 people were gathered inside the Mosta Rotunda for an afternoon Mass. Whether deliberately or by inadvertence, three bombs hit the rotunda, one of which  penetrated the dome at the spot above and came crashing through into the church proper. That should have been it for those inside, but (and here's a phrase I keep using in Malta) "By some miracle", the bomb failed to detonate.

A replica of the bomb is on display in the Mosta vestry and you'll never convince the faithful that this was not a miracle, but just another German dud. 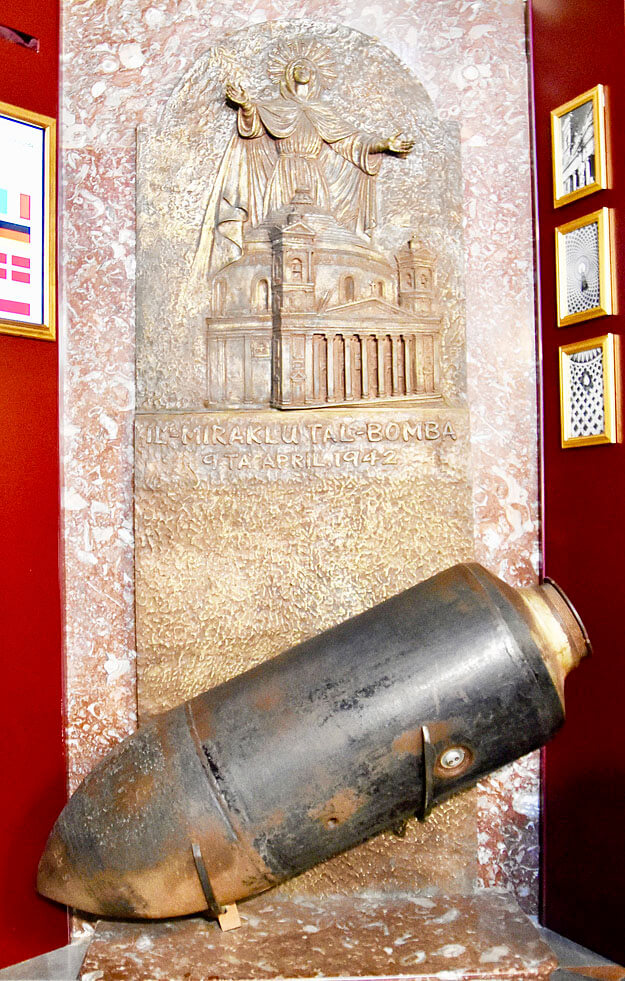 In thanks for the protection the Virgin Mother afforded the residents of Mosta this image of her is removed from the church and paraded through the streets of the town every Assumption Day in one of the eighty or so religious festas held each year in Malta. These involve marching bands, fireworks and apparently lots of alcohol. Too bad we missed it. 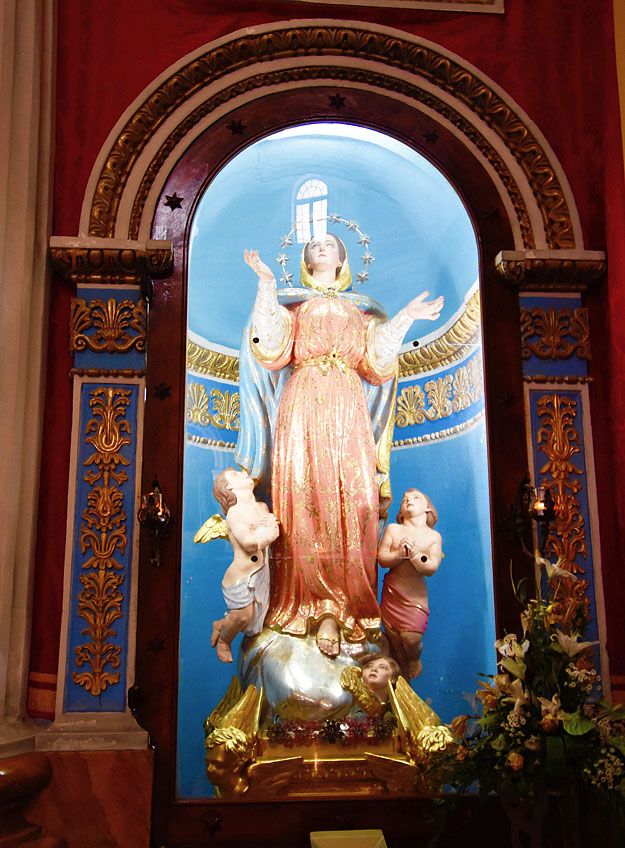 One final thing of note in the Mosta Rotunda is this carved wooden statue of Jesus falling as usually depicted in the third, seventh and ninth Stations of the Cross. Although I didn't notice it at the time, in looking at the picture now I cannot help but think how similar this face looks to Osama bin Laden. No offence intended. 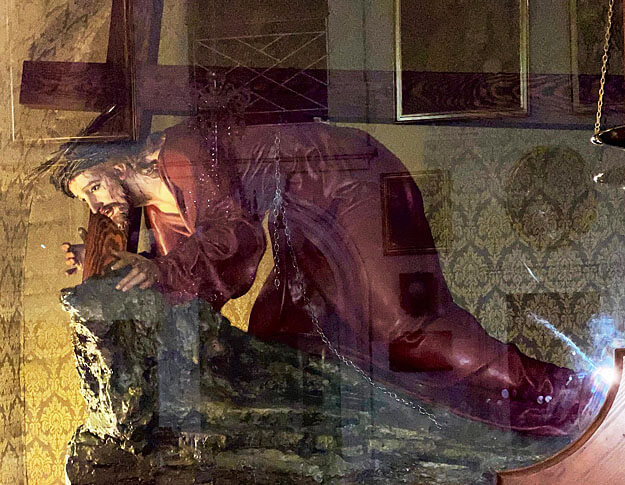 In the second part of this post we'll leave Mosta and the interior of Malta and head to the southeast coast and the fishing village of Marsaxlokk. If you have any preordained images of Malta in your brain, there's a pretty good chance they are of the colourful fishing boats known as luzzus. While they were originally powered by oars and sails, pretty well all luzzus are now motorized and still used as onshore fishing boats. No longer being built, the largest collection of them can be found at Marsaxlokk.

On the way into town we passed Fort San Lucian which dates back to the Knights of St. John, but today houses the Malta Aquaculture Research Centre which is doing research on raising endangered species like the blue fin tuna.

We only spent an hour or so in Marsaxlookk, but just walking the waterfront was one of my fondest memories of the entire trip. This picture couldn't be taken anywhere in the world but Malta. 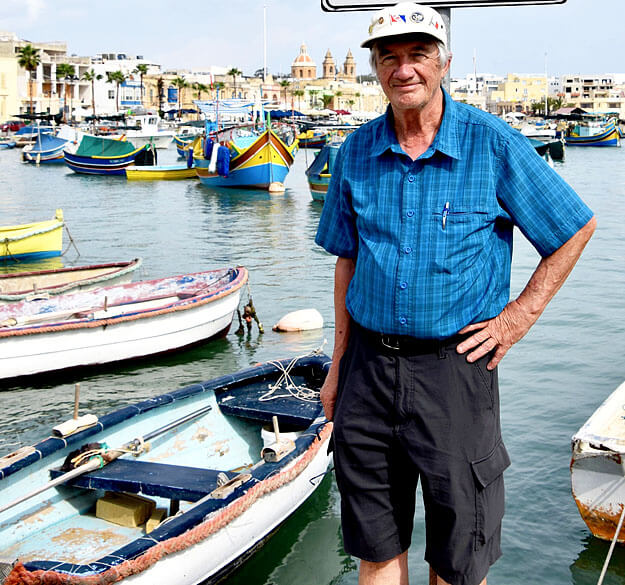 On the Waterfront, Marsaxlokk

Every luzzu is decorated with one or more of these stylized features known as the Eye of Osiris which is an ancient protective talisman dating back thousands of years. 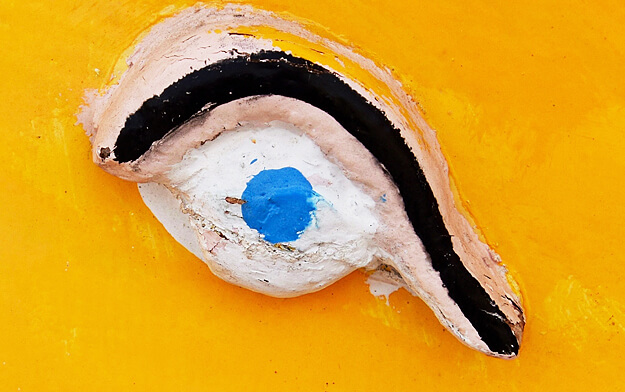 On the waterfront is this statue of a Maltese fisherman returning with his catch with his son, daughter and cat awaiting him. It is a great piece of public art. 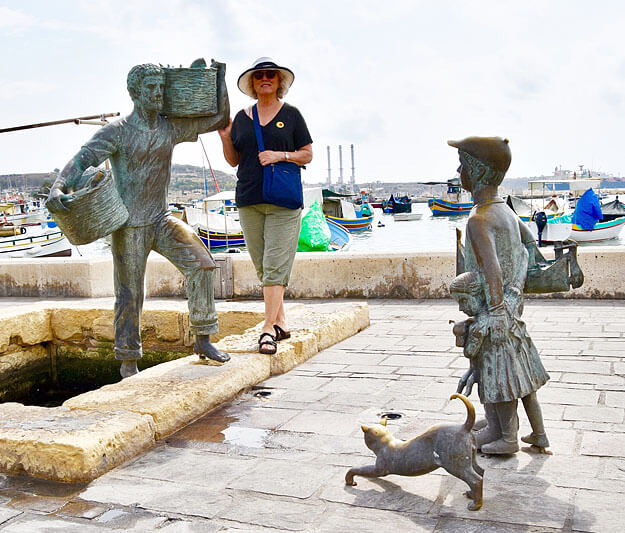 While I wrote that this would be my final post from the island of Malta, it is not the last from the nation of Malta. Please join our Adventures Abroad group as we board a ferry and visit Malta's smaller sister, Gozo over the next few posts.

We thank Dale Dunlop, the Maritime Explorer, for another fantastic overview of these important locations on the island nation of Malta. Stay tuned for the next blog post featuring the island of Gozo!