In his latest blog post, Dale Dunlop, The Maritime Explorer, delves into Clapham Junction - Malta's Mysterious Cart Tracks. If you are interested in dates and prices for this trip please check out our 6 DAY MALTA TOUR

In the last post from my recent Adventures Abroad trip to Malta led by Victor Romagnoli we began our exploration of the country’s famed Megalithic temples at Hagar Qim. During this visit and later in conducting my own research before writing the post, I learned that there is no archaeological consensus as to the purpose of these most ancient of monuments. Today we are going to visit a site that is shrouded in even more mystery – the mysterious stone markings at Clapham Junction. Please join our group as we delve into yet another of the reasons that visiting Malta should be on every traveller’s wish list.

The first question anyone familiar with railroading might ask is “I thought Clapham Junction was in London?” The answer is that indeed it is, one of the busiest railway junctions in the world. I personally remember it well as on the day before Alison and I were to take the Flying Scotsman from Edinburgh to London in December 1991 the IRA set off a bomb at Clapham Junction that completely screwed up the British rail system for days. 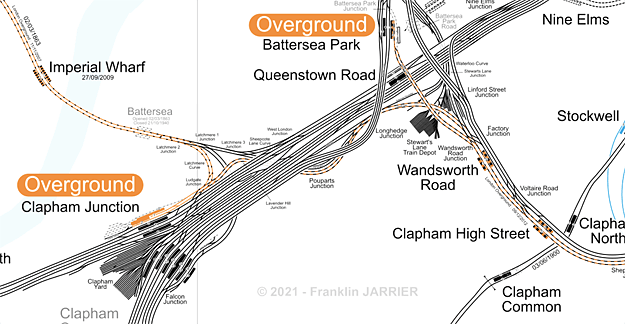 This is an aerial photo of Clapham Junction, Malta. You can see why it got its name, but we also know those aren’t railway tracks. But what the hell are they? People have been asking that question for ages and there’s again no consensus, but maybe when we see it up close we’ll come up with the solution. 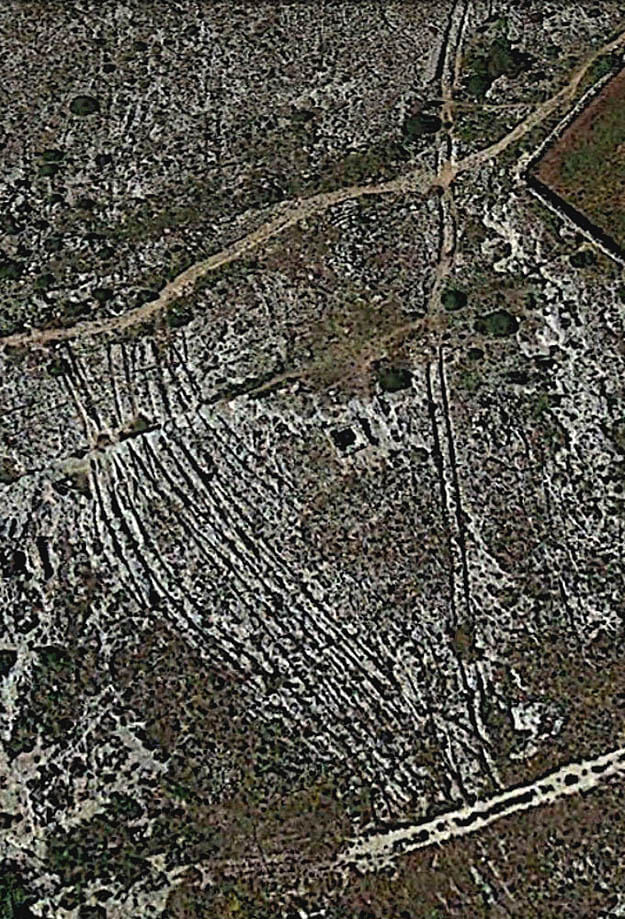 Like everything in Malta, it doesn’t take our group long to get to a place that in Maltese goes by the easily pronounceable Misrah Ghar il-Kbir. It’s on a narrow country road near the southern coast not far from Hagar Qim. There’s no actual parking lot or natural starting point so Silvio, our driver lets us out on the side of the road and we follow Chantelle, our local guide onto a barren limestone plateau. 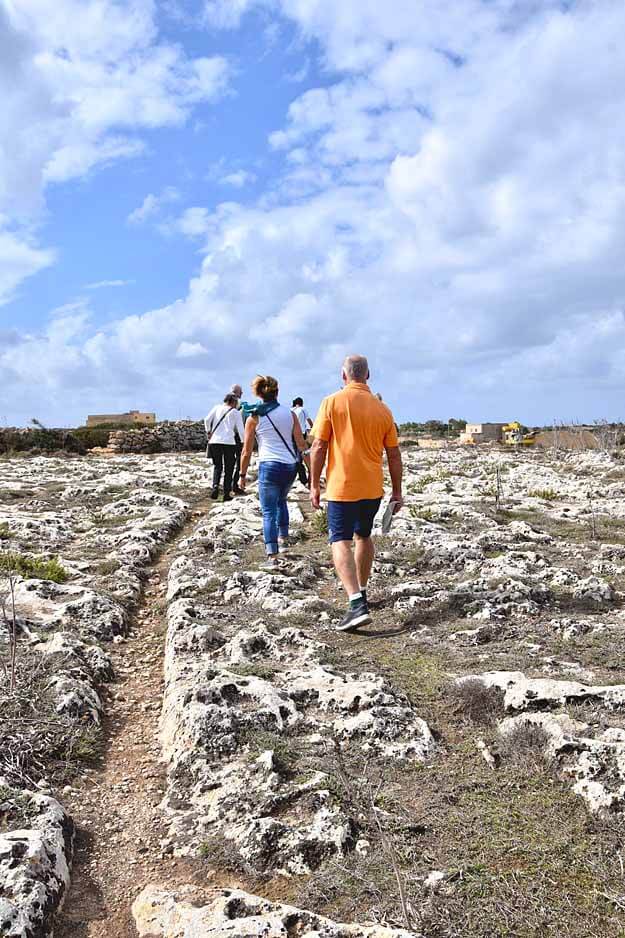 The features that have made Clapham Junction famous are immediately apparent and I can understand why the traditional view is that they were made by the wheels of carts. 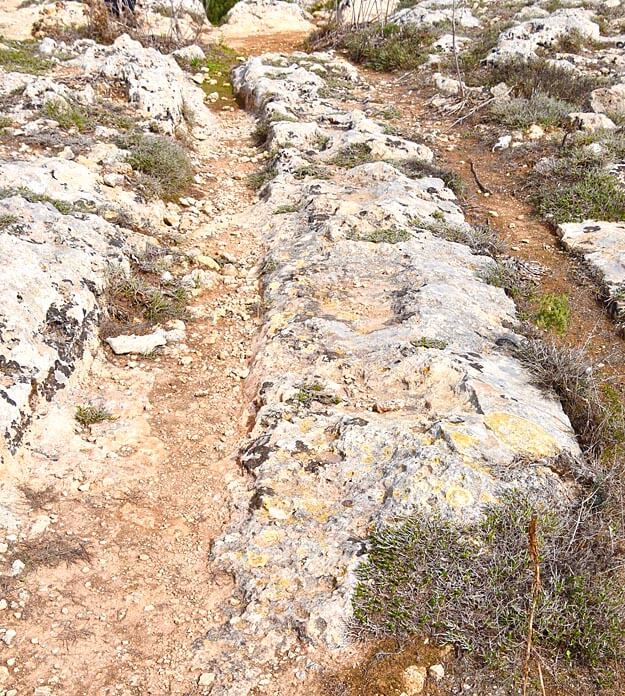 There are lots of known instances of the wheels of carts and chariots creating grooves in soft rock over centuries of use. There’s a famous example not far from Malta in the Sicilian city of Syracuse where cart tracks or ruts leading into the amphitheatre are quite apparent. The Oregon Trail is another example where cart tracks have clearly been created, this time in a matter of decades and not centuries. So no one’s going to deny that cart tracks is a possibility.

However, the more I wander around the site at Clapham Junction the more sceptical I get. First of all the distance between the cart tracks is inconsistent as is the depth. And then you get the criss-cross pattern you can see at the bottom of this photo.

And what the heck is this mishmash? Usually, if there is a recognizable cart track then you are going to follow it, just like cross-country skiers do in the tracks that are laid down for them by a machine. 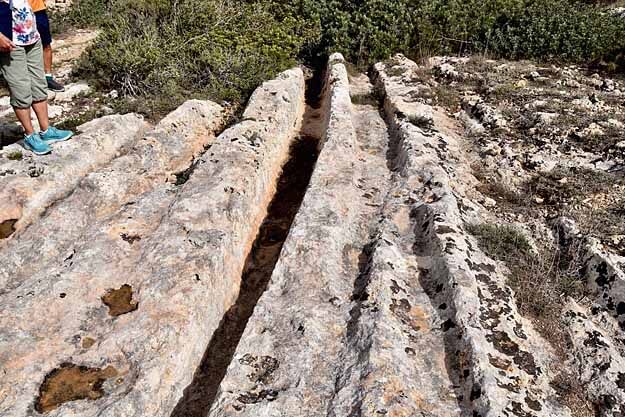 The biggest problem with the cart track theory is that they don’t go anywhere that you would expect. None of the major Megalithic temples have cart tracks leading to them. In other places, the tracks go up to the edge of a cliff, and others are found underwater. So I just don’t buy that at some distant time in the past thousands of people were tearing around Malta dragging God knows what to create these markings.

That being said, there does seem to be a consensus that these are not natural phenomena, but definitely, something man-made. In an earlier post, I commented on the fact that the first people on Malta from about 5900 to 4500 BC exhausted the soil and either died out or emigrated. No doubt this did not happen overnight, but likely took centuries and I imagine the farmers did everything they could to stop it from happening. Several theories have been posited that the Clapham Junction markings and many others found throughout Malta and Gozo were either some type of irrigation canals or soil traps to prevent the already thin topsoil from blowing away. Of course, there are always the ‘alternate facts’ theories, such as that these were made by aliens as some type of intergalactic space markers. This would be the same aliens whose skulls were found in the Hypogeum and who built the Megalithic temples. Not! When something ‘defies explanation’ as the Clapham Junction markings do, that simply means that we don’t know the explanation, not that there is no explanation.

Well, I’m sorry to report that I have not solved the mystery of the Clapham Junction markings, but my in-person visit convinced me that they are anything but cart tracks. Maybe if you come on the next Adventures Abroad trip to Malta you’ll have better luck than I did.

Very close to Clapham Junction is Verdala Palace which dates back to 1586 and today it is the Maltese President’s summer residence. It sits amid the Buskett Gardens, one of the few densely forested places in the country. This is how it looked when we passed it on the way to Clapham Junction. 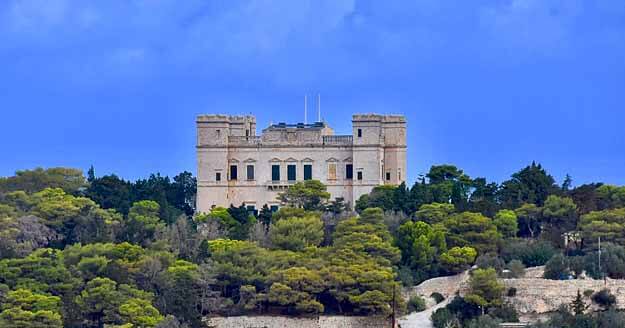 This is how it looked when we passed it heading back to Valletta. Chantelle advised that the raising of the flags indicated that the President had arrived sometime during our Clapham Junction visit. 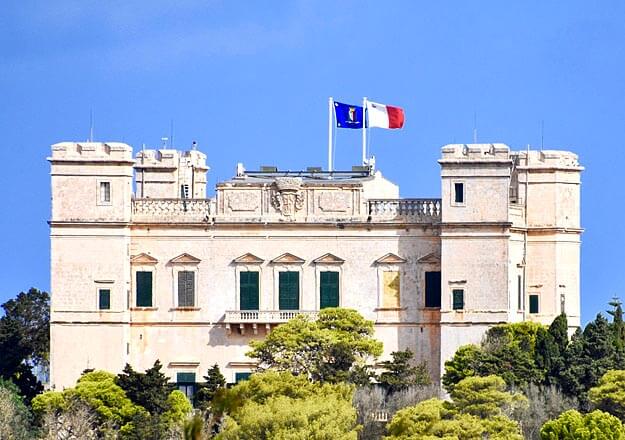 If you are a Game of Thrones fanatic you might recognize this as the house of Illyrio Mopatis, a minor character who appeared in only a few episodes.

Also very near to Clapham Junction are the Dingli Cliffs, the highest point on Malta on which sits the tiny Chapel of St. Mary Magdalen which dates back to 1646, although there was an earlier chapel here over two hundred years before that. The benches make a great spot to sit and contemplate life with the sea far below. 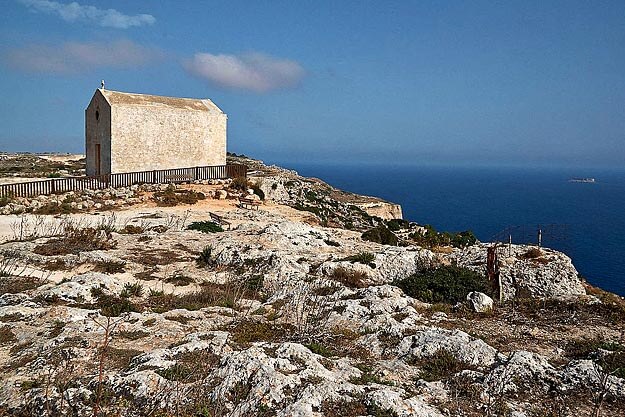 Or you could drop by the vendor who is set up at the entrance to the chapel selling Maltese coffee and ripe prickly pear fruit, as I did, with Silvio looking over my shoulder. 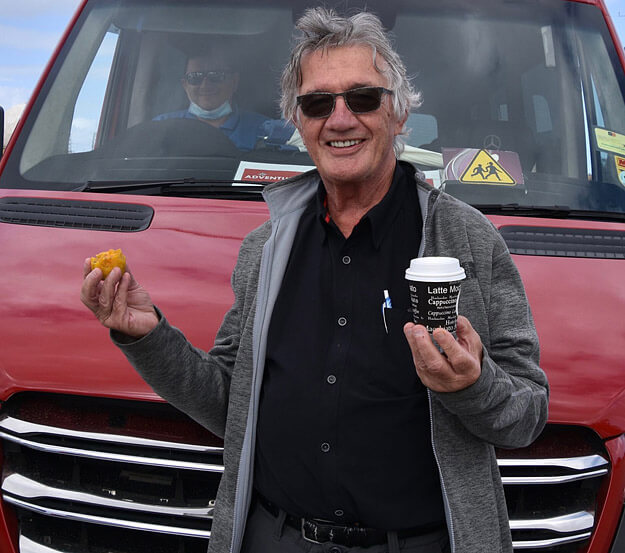 Well, we didn’t solve another Maltese mystery during our visit to Clapham Junction, but we had fun nonetheless. In the next post we’ll go from mysteries to miracles as our group goes on a search for places associated with St. Paul during his unplanned visit to Malta almost 2,000 years ago. Please join us on the hunt.

We thank Dale Dunlop, The Maritime Explorer, for once again joining us on tour and sharing his story of getting back on the road for an Adventures Abroad tour to Malta. Please stay tuned for more blog posts featuring Dale and his experiences with us on this Malta tour.