In his latest blog post, Dale Dunlop, The Maritime Explorer, travels on toward the capital of Turkey, Ankara - Visiting Ataturk's Mausoleum. If you are interested in what Adventures Abroad has to offer, please check out our Small Group Tours.

In the last post of four from Cappadocia, we went ballooning, fulfilling a lifelong dream for some of us on this Adventures Abroad, Western Turkey Tour. Now it was time to leave this storied wonderland and head for the capital city of Turkey, Ankara where we will visit the Ataturk Mausoleum and the Museum of Anatolian Civilizations. Before getting there we will first stop at the Tuz Gulu salt flats, sometimes home to thousands of flamingoes. Please join us on one of the final days of this fascinating and rewarding tour.

This is a Google Map of our route today with the large blue lake on the left being the Tuz Gulu salt flats.

We reached our first stopping place at Tuz Gulu around our usual mid-morning coffee and bathroom break. Tuz Gulu is the second largest lake in Turkey and one of the largest salt lakes on earth, at least when it has water in it. Because it has no outlet the water that drains into it eventually evaporates and the salts in the water (yes there is even salt in freshwater) accumulate. Currently, over a million tons of salt are mined from the lake annually. The lake is never more than a few feet deep and sometimes is almost non-existent. This seemed to be the case as Alison and I ventured out onto the salt flats in what is truly an otherworldly landscape. It was far too late in the year for flamingoes and it looked pretty hostile to any form of life, but I'm glad we saw it. 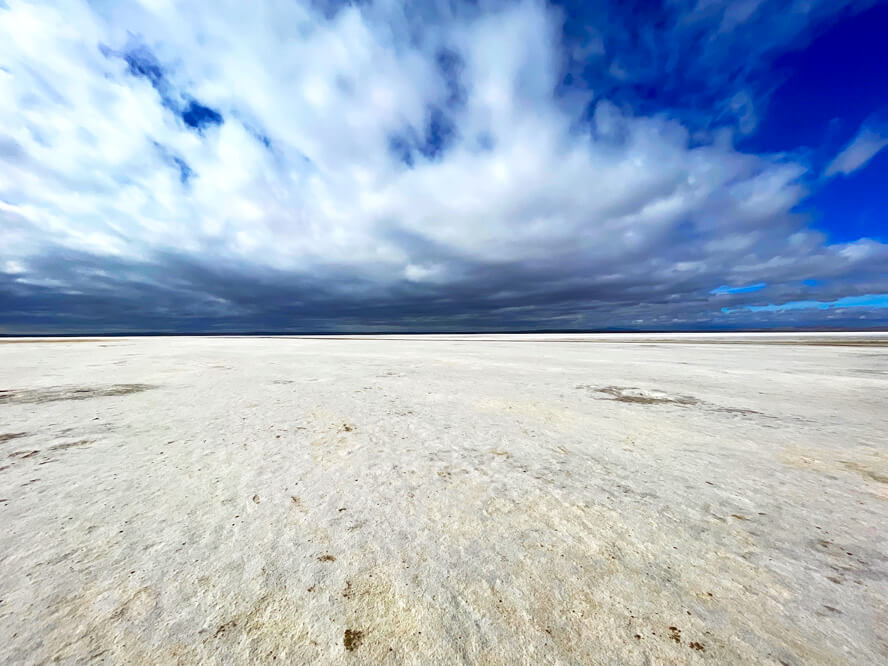 Ankara comes into view miles before you even enter the suburbs of this city of over five million inhabitants. There appear to be a number of distinct areas with large modern buildings rather than one definitive downtown like most cities. Frankly, from a distance, it reminded me of Houston. I could only hope Ankara is a lot more interesting and in fact, it is.

Once known as Ancyra and then Angora from whence Angora goats, rabbits and cats are all well known for their thick hair. Ankara has seen even more civilizations control its territory than those we visited on the Aegean and Mediterranean coasts. Starting with the Hattians, a Bronze Age people dating back to at least 2000 BCE the area became Hittite, Lydian, Phrygian, Galatian, Greek, Roman, Byzantine and finally Ottoman before supplanting Istanbul as the capital of Turkey in 1923. Despite this illustrious past and the many archaeological sites related to these various civilizations, Ankara seems to be the Rodney Dangerfield of Turkey, not getting the respect it deserves as a tourist destination. I confess it was never high on my list compared to many other capital cities.

Although we did not spend more than one day in Ankara and obviously only brushed its surface, I am very glad it was on the itinerary. For one, it was a much greener city than I anticipated with lots of parks, flowers and wide tree-lined boulevards. Secondly, the traffic was much more manageable than in Istanbul. It also did not have the frenetic pace of Istanbul which can be both exhilarating and exhausting at the same time. I came away very favourably impressed with the city starting with our visit to the Ataturk Mausoleum.

Kemal Ataturk is the most revered name in modern Turkish history. We first came across the beginning of his legacy during our tour of the battlefields of Gallipolli - A WWI Tragedy Revisited where he was instrumental in securing victory for the Turks and we've been seeing his statue in almost every place we've gone since. His name translates as 'Father of the Turks' and he certainly was that as he led the struggle to free his country from both the decadent Ottoman Empire and the European WWI victors who were eager to divide the country up after the war. Once firmly in control he literally reinvented the country by doing away with the power of the Caliph and the Islamists and making Turkey a secular state. That in turn led to elevating the status of women and giving them the vote. He led the country with an iron fist until his death in 1938. By then he was a cult-like figure and warranted the erection of a giant monument in Ankara, the city he designated as the country's capital in 1923. Given that the very first mausoleum was built for Mausolus in the city of Halicarnassus (now Bodrum) on the Turkish Aegean coast, it was appropriate that the monument be a mausoleum.

The site chosen for the mausoleum was atop Observation Hill one of the highest points in Ankara which can be seen for miles around. There is actually far more to the site than just the mausoleum including the Road of Lions, the Ceremonial Plaza and the Peace Garden. It took over nine years to complete and was only finished in 1953. Since then it has become a site of pilgrimage for all Turks and is a symbol of the unity that Ataturk brought to his countrymen. Sadly the current president, Erdogan seems intent on eroding the pillars of the secular state by pandering to the religious right just as another Former Guy has done in the USA.

It was a beautiful day in Ankara as our driver let us off at the entranceway to the Anitkabir which is the correct name for the entire complex. At one end of the Road of Lions stand six figures, three men and three women that face each other on opposite sites of the walkway. The men are a scholar, a farmer and a soldier, three key figures in Ataturk's modern Turkey. 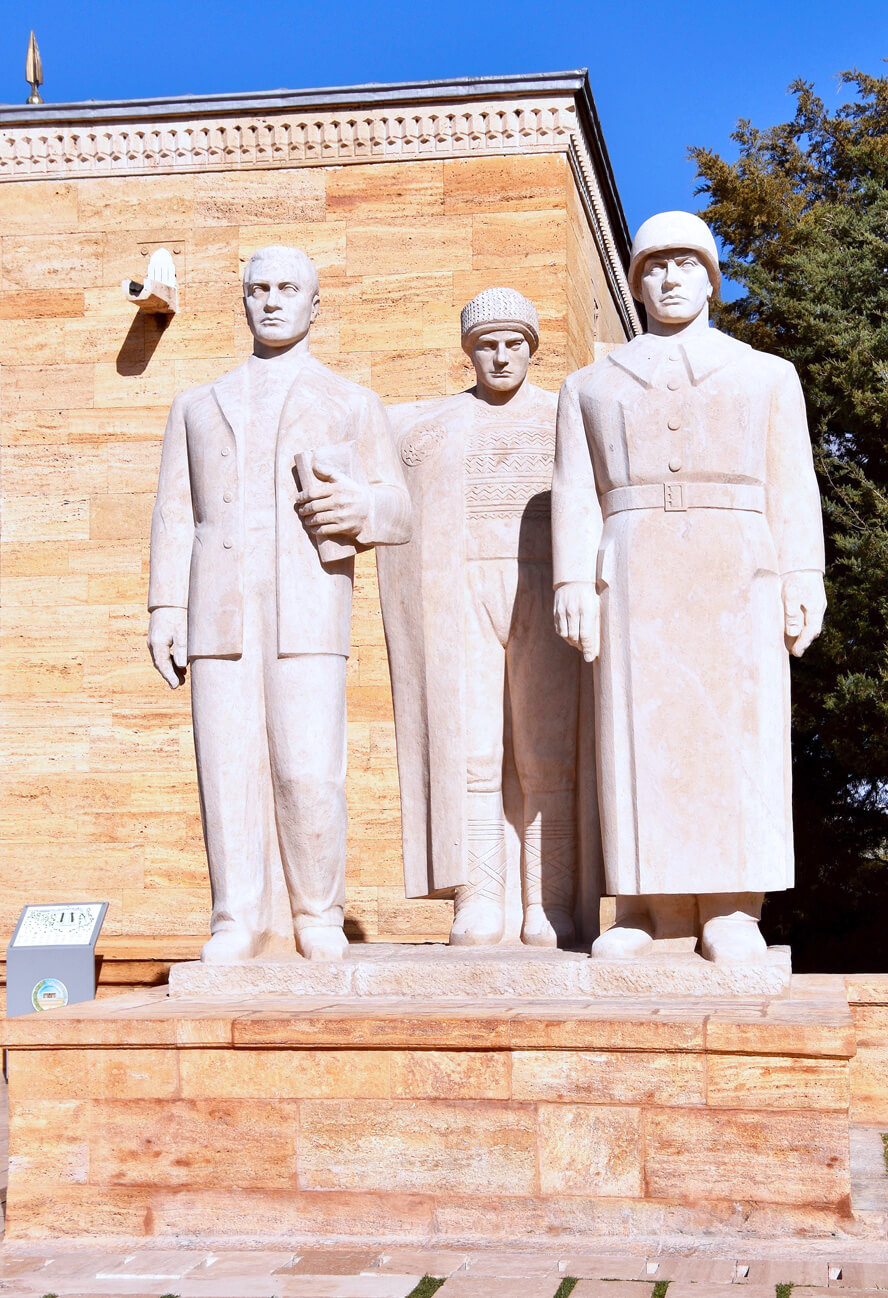 Opposite stand the three women, one crying and two holding a wreath of grain sheaves representing the abundance of Turkey's agricultural sector. 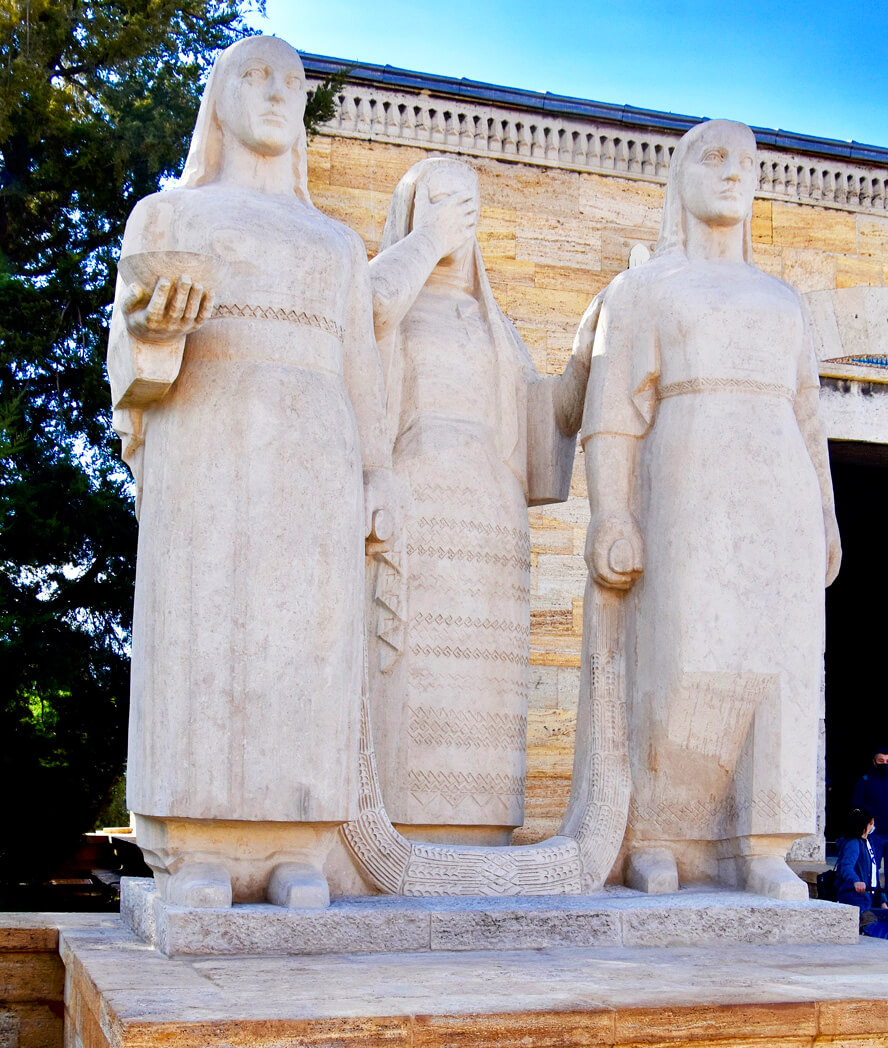 The Road of the Lions is named for the 24 replica Hittite lions that line the roadway which leads to the Ceremonial Plaza. It is 860 feet long and is a very impressive way to approach the mausoleum. 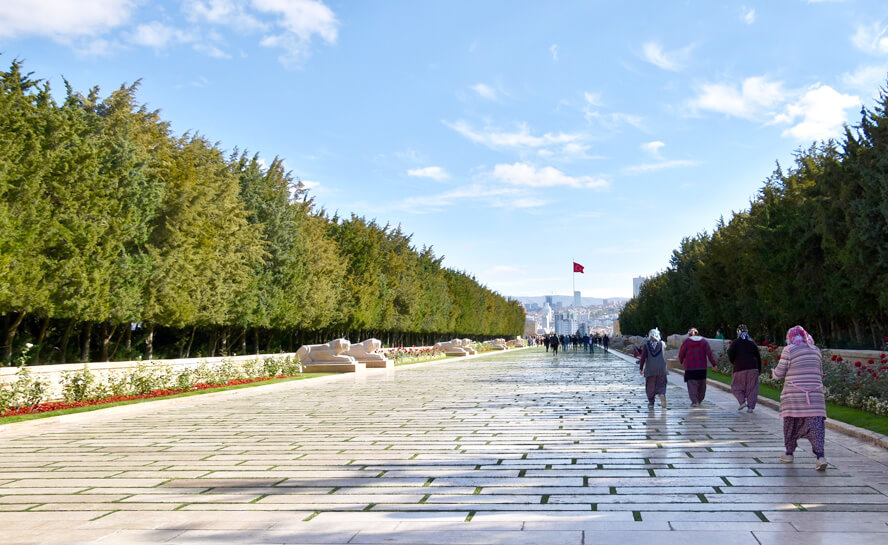 Roadway of the Lions

This is a closer look at the lions. 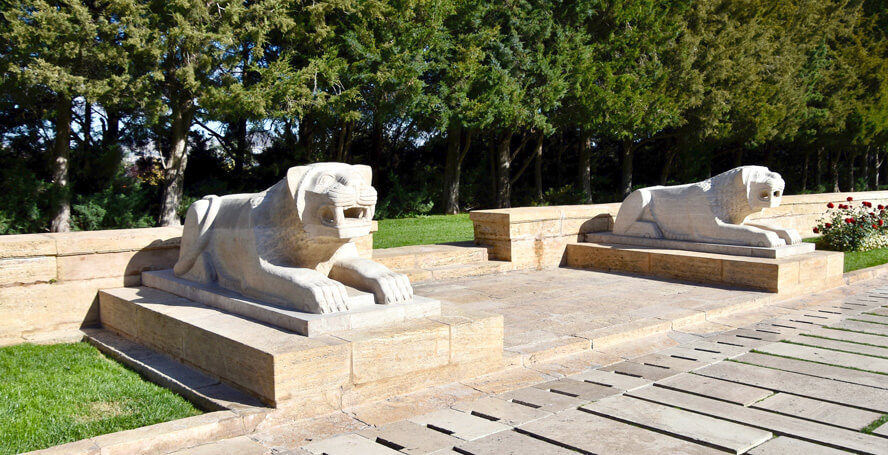 This is our group as we neared the end of the walkway to enter the Ceremonial Plaza. 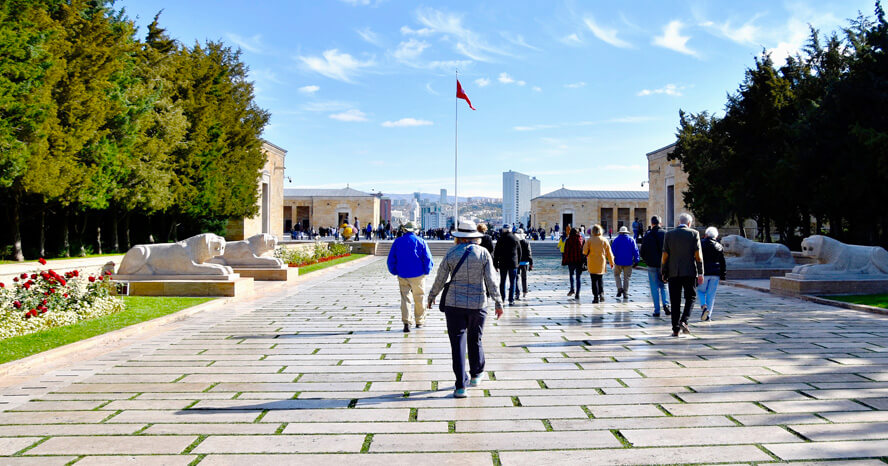 Our Group on the Road of Lions

Entering the Ceremonial Plaza we were greeted by this group of marching soldiers wearing their Covid masks. Their high steps made for interesting shadows. 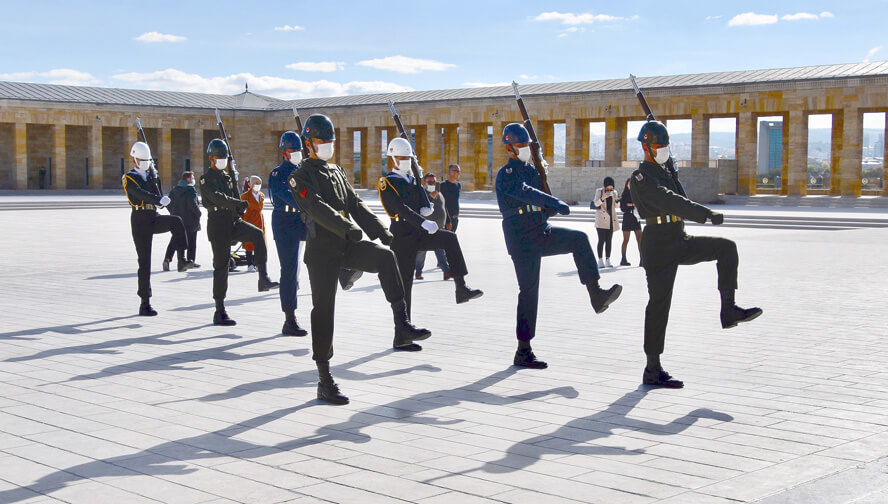 After they marched by we turned around to see the magnificent site of the mausoleum looming before us. One can't help but compare it to a classical Greek temple. That's our guide Yasemin in the lower left explaining aspects of the mausoleum to some of our group. 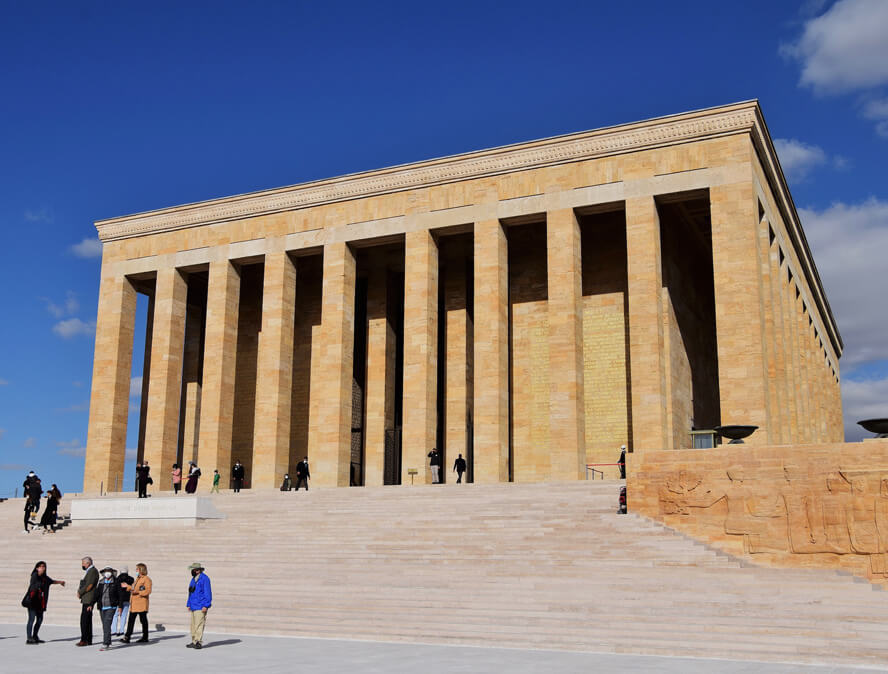 The interior of this grand building in Ankara is the Hall of Honor which is quite sparse with this massive 40 ton sarcophagus the apparent final resting place of Ataturk. Except it's not. Yasemin tells us that the actual remains are in a sealed room directly underneath the sarcophagus. 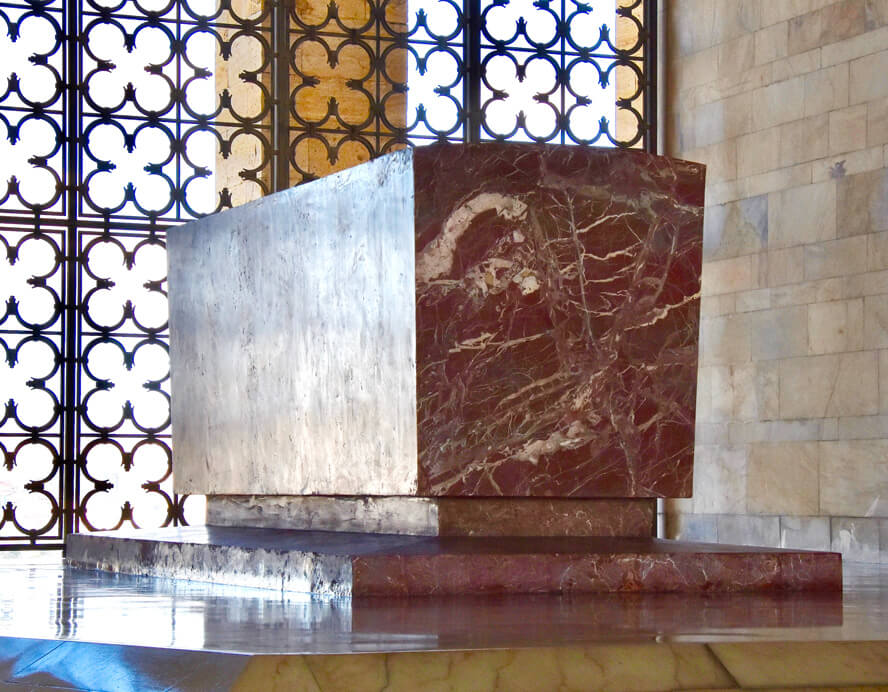 This is the view of Ankara from right outside the sarcophagus and comprises the modern city that it had become under Ataturk's leadership.

Ankara from the Mausoleum

Every November 10, which is the day on which Ataturk died, hundreds of thousands of Turks converge in Ankara and make their way to the mausoleum. In 2013 over one million of them visited on that day. I couldn't imagine what that would be like because today, while there are lots of people around, it is not in the least crowded.

As we made our way back to the bus we passed this symbol of Turkey, the white star and crescent which was actually a part of the Ottoman flag and about the only thing from that regime that Ataturk elected to keep.

We have one other important stop in Ankara and that is the Museum of Anatolian Civilizations which I will describe in the next post. See you there.