In his latest blog post, Dale Dunlop, The Maritime Explorer, stays in Geneva and takes in some of the sites and wonders if it is the....World's Most International City? If you are interested in what Adventures Abroad has to offer, please check out our Small Group Tours to Switzerland.

In the first post from Geneva, Alison and I spent most of it walking around the area known as The Old Town where figures such as John Calvin and Jean-Jacques Rousseau were at home. In this post, we'll go wider afield and visit or at least try to visit some of the famous international organizations that are based in Geneva and make it perhaps the most international city in the world. Please join us.

The starting point for any discussion about getting around Geneva or anywhere in Switzerland is the country's fabulous transportation system. Everything here does run like a Swiss watch. Trains, trams, buses and boats are coordinated in a manner that has to be experienced to be believed. The best way to do this is with the Swiss Travel Pass which is only available for non-residents. Not only does it provide the right to ride on just about any form of transportation in the country, but also entry into pretty well all of the major museums, galleries and other attractions. Laura Fairweather of the Swiss Tourism office in Toronto was kind enough to provide us with these for the four days we were in the country before joining the Adventures Abroad Switzerland Tour and they made getting around in Geneva a breeze. We also used it to get from Geneva to Basel and then from Basel to Zurich.

Armed with our Swiss Travel passes we decided to visit some of the most famous institutions that are based in Geneva starting with the United Nations. 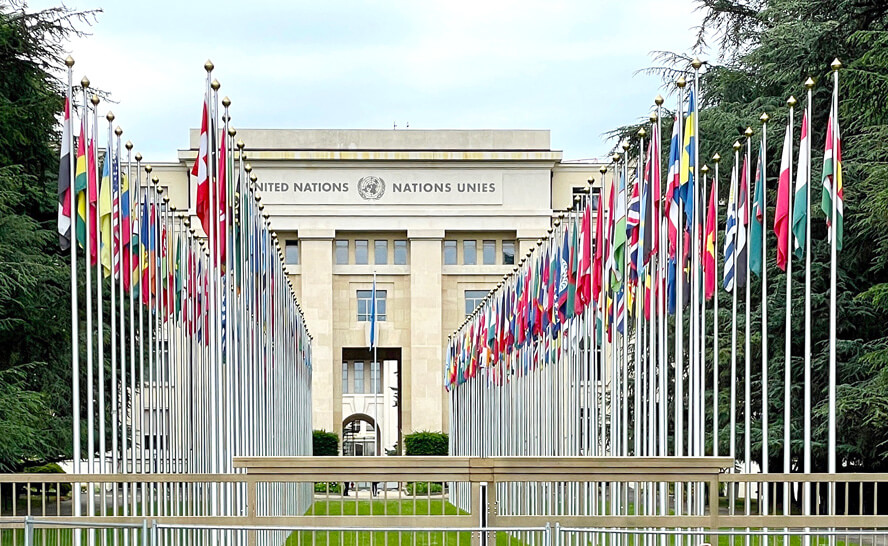 Most people mistakenly believe that the United Nations is based in New York City, which is only half true. That is where the Security Council and the General Assembly meet, but the administrative centre is in the Palais des Nations and surrounding buildings in Geneva. Originally built as the headquarters of the failed League of Nations, the building was repurposed after WWII to house the day-to-day operations of the U.N. Currently over 12,000 meetings a year are held here among the 193 member states. Geneva is home to 181 permanent missions to the U.N. which explains why walking the streets of the city is unlike any other in the country and maybe the world. You see people of every possible ethnicity, many wearing the traditional garb of their country. Many of these people are directly linked to the various permanent missions.

There are free tours offered to the Palais des Nations, but we had not signed up for one and the photo above was as close as we could get. Still, it's definitely worth the short bus ride to the area as there is more to see including the famous broken chair sculpture in the United Nations plaza. 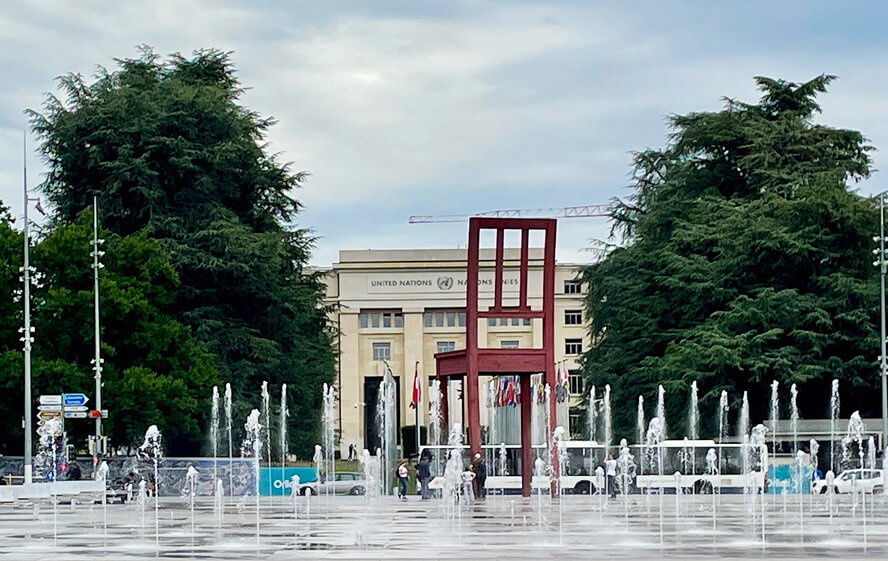 You can't really see why it is called the broken chair from this angle, but once you get close up it is obvious. Now it might be tempting to think of this as a metaphor for the UN itself which has many dysfunctional elements, most notably the Commission on Human Rights which has some of the most notorious rights abusers on the planet as members. However, it was actually created by artist Daniel Berset as part of the international campaign to ban landmines. Once you know that it makes perfect sense. 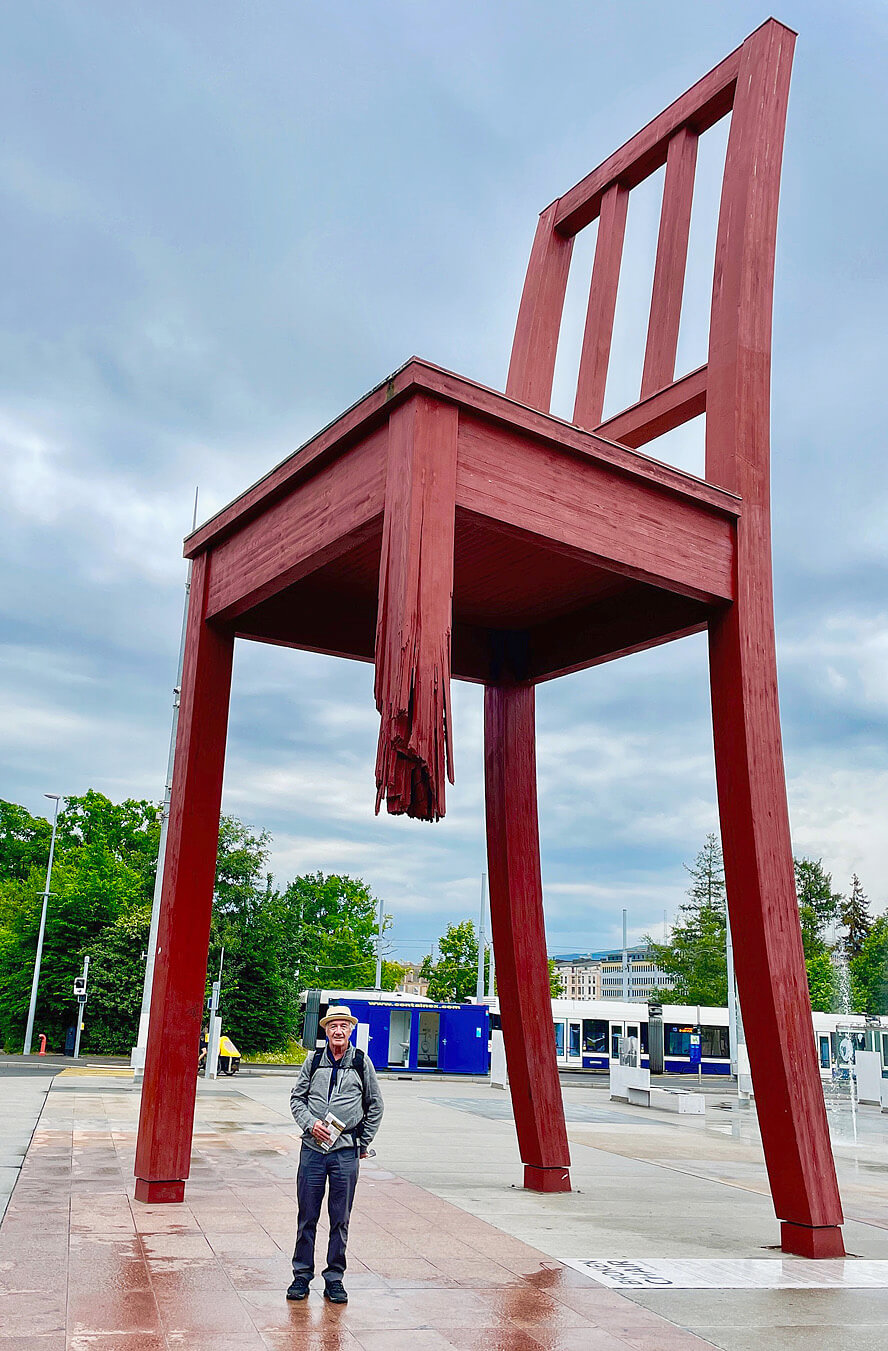 Under the Broken Chair

Also in this immediate area of Geneva is this intriguing work featuring a knotted cannon entitled 'Peace'. It is analogous to the famous Knotted Gun sculpture that was erected in front of the UN headquarters in New York after the assassination of John Lennon. 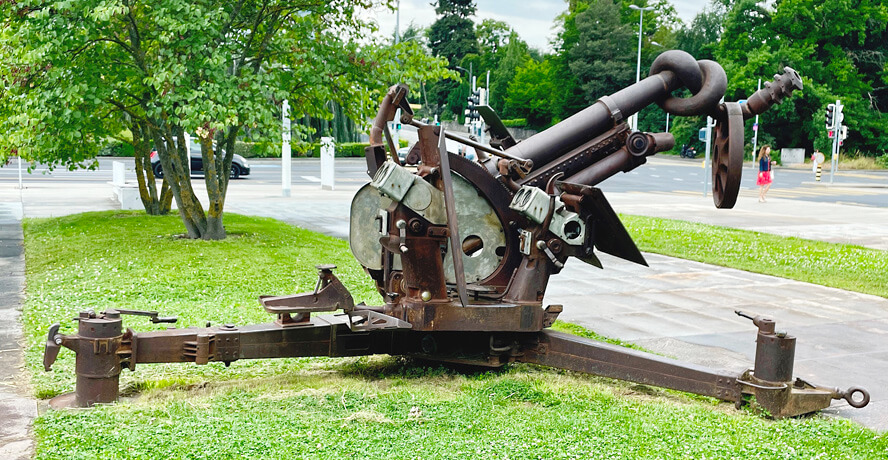 Viewing these things and thinking about the useless UN Commission for Human Rights whose sprawling headquarters is also in this area can be a bit of a downer so Alison and I hopped on a bus that took us to the Geneva Botanical Gardens which has over 16,000 species of plant on display. Ordinarily, I would call a place like this the standard 'oasis of tranquility', but frankly this entire area of Geneva along Rue de Lausanne fronting on the lake is that. 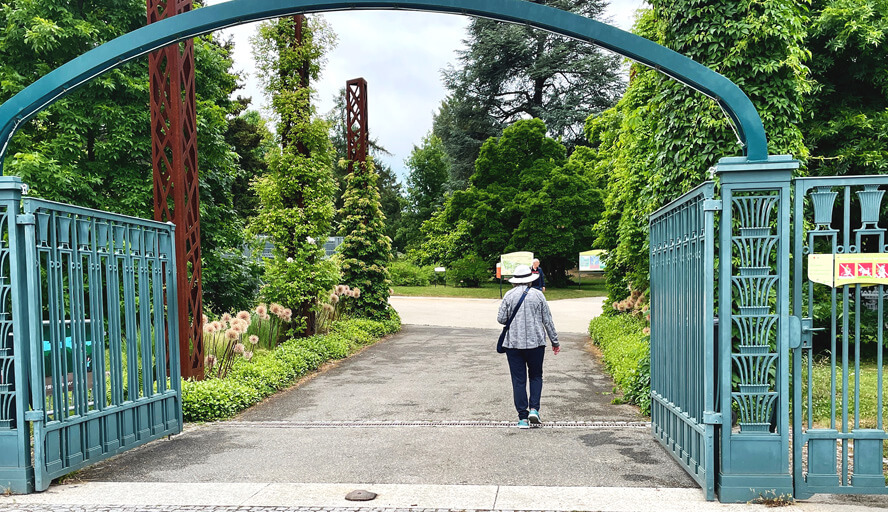 We spent well over an hour just strolling the grounds and greenhouses of the Botanical Gardens and for some reason I just felt like taking it all in, the sights, sounds or lack of them and the fragrances without worrying about taking photos. So no flower pics in this post.

Opposite one of the entrances to the Botanical Gardens is another world headquarters, this one for the World Trade Organization which surprisingly considering its world wide influence on global commerce, was only established in 1995. 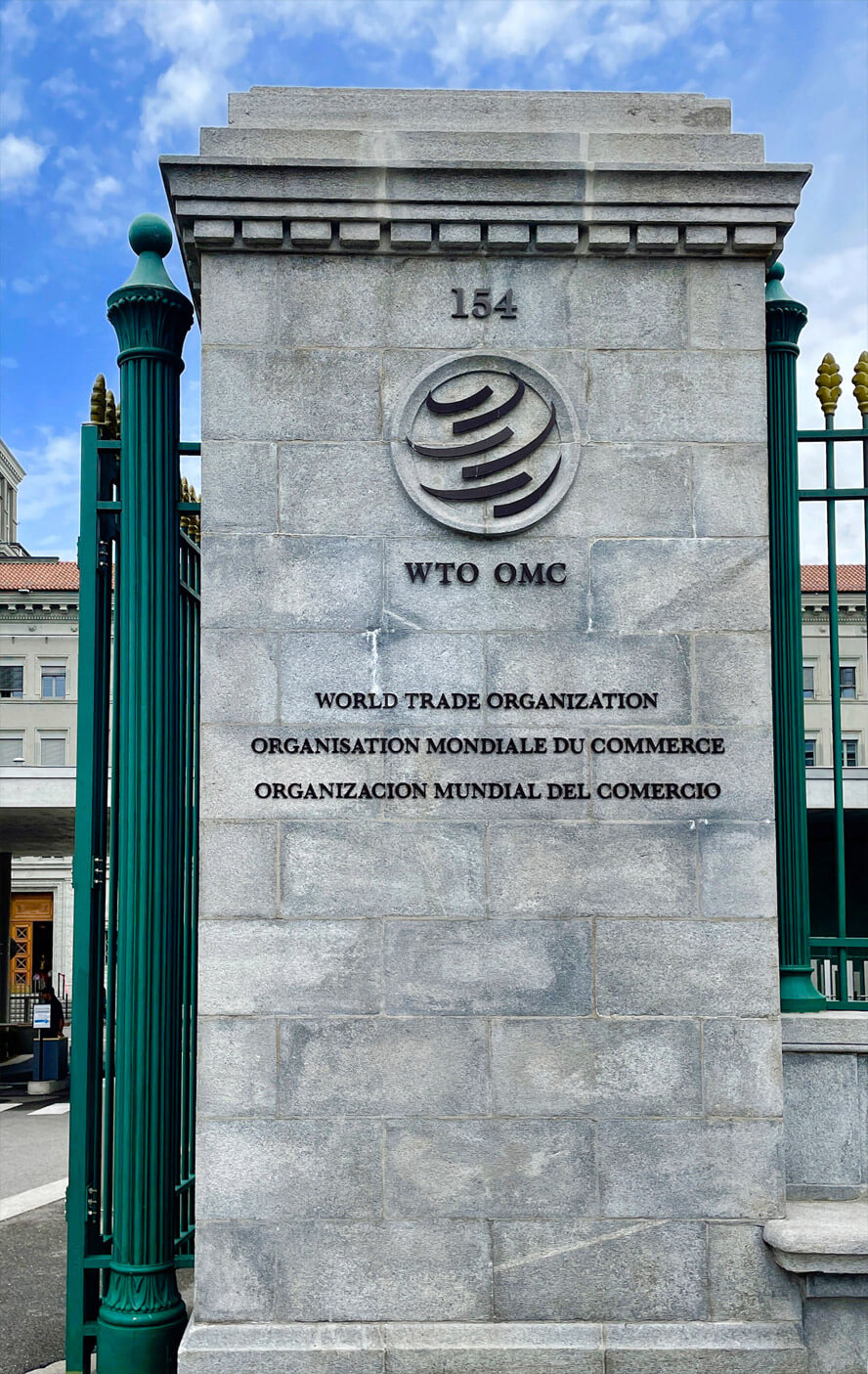 We were not far from one of the stops for the water buses known locally as mouettes that ply the waters of Lake Geneva and given that it was a beautiful day, a boat ride on the lake was a great idea. While waiting at the water bus dock, I observed this great crested grebe mother who had three chicks nestled under her plumage. We saw quite a few pairs on the lake that morning. 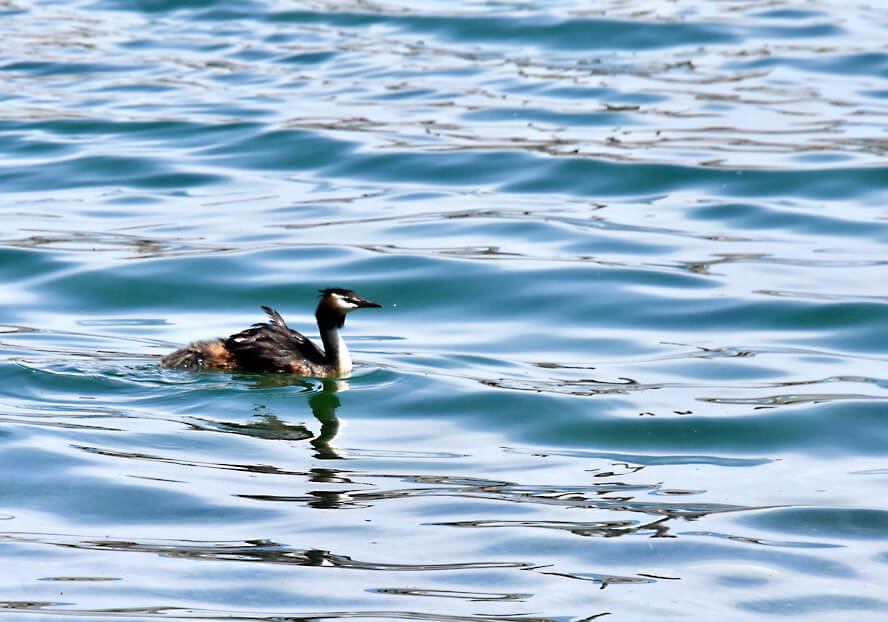 This is a Lake Geneva mouette which arrived exactly on schedule. It took us first to the opposite side of the lake where the marina and beach are located. You don't usually associate Switzerland with beaches, but we saw quite a few during our visit. 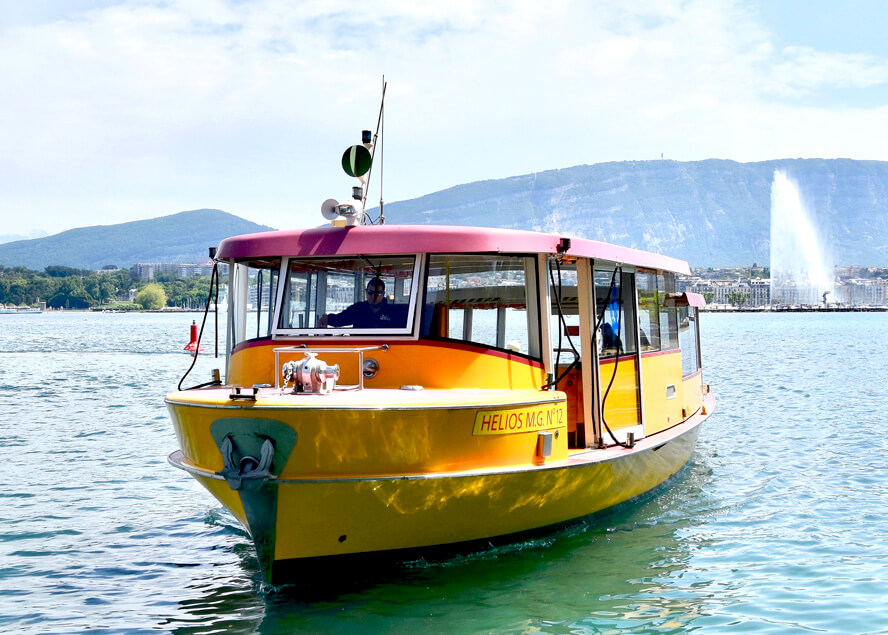 From the marina dock, the mouette recrossed the lake to the Paquis dock where we disembarked not far from our hotel. Along the way, we got a close-up look at the Jet d'eau, the highest fountain in the world. This alone is reason enough to make a ride on a mouette a mandatory outing while in Geneva. 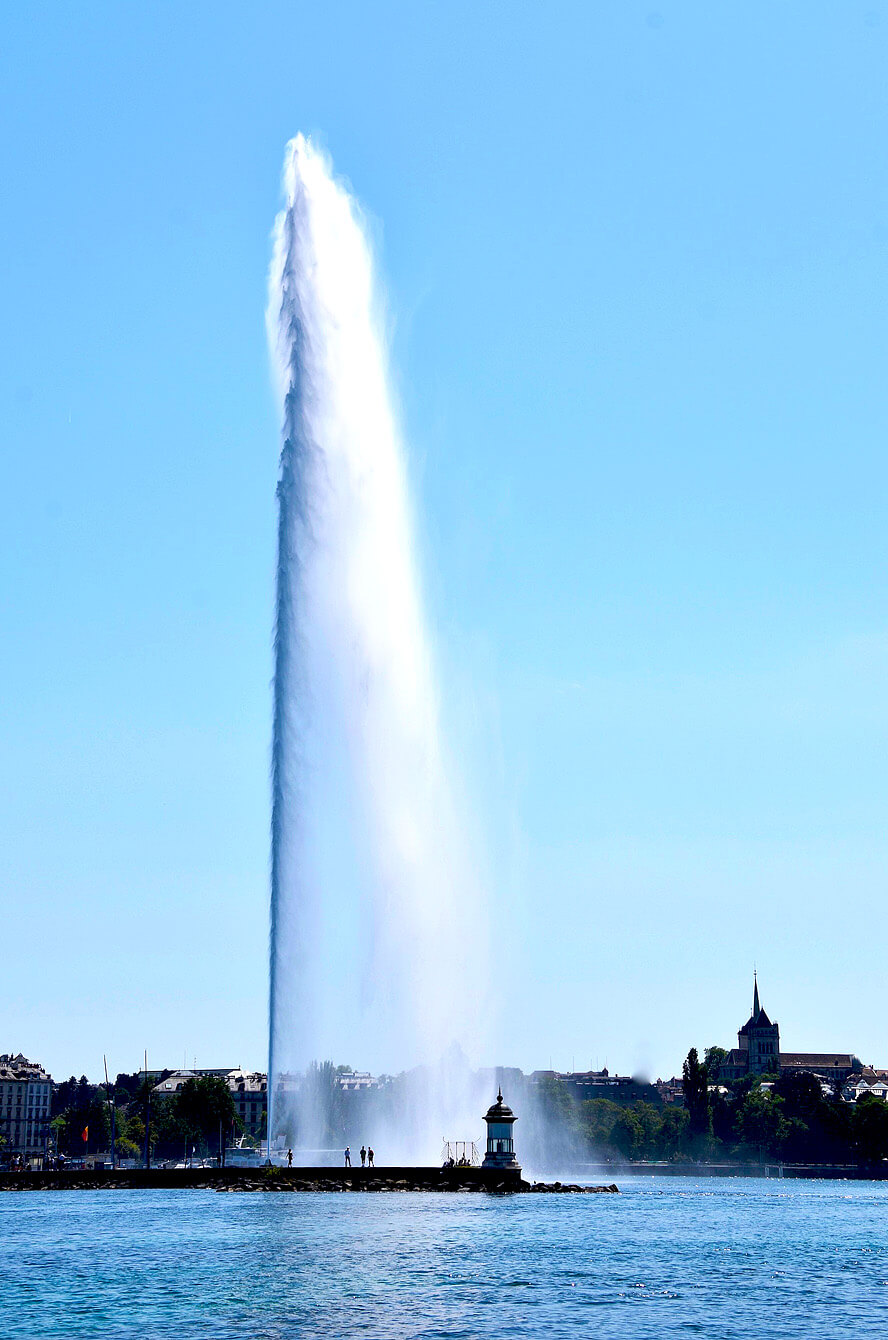 However, it was not the only site of note. This is the cathedral from the water, a view you really can't get from anywhere else in Geneva. 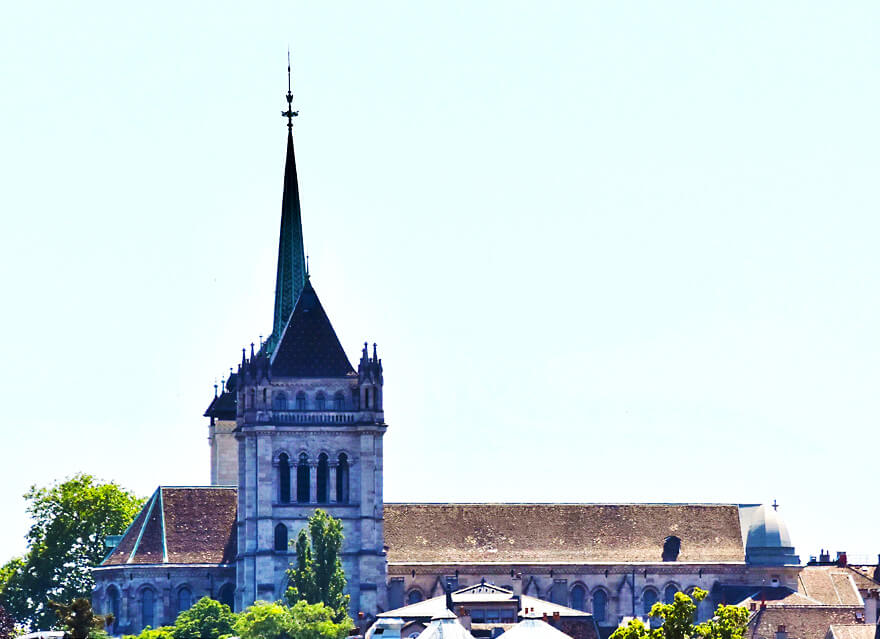 And lastly a very contemporary site. This is Villa La Grange which is an 18th century villa and surrounding park that was bequeathed to the city of Geneva by its former owner. It was in the news in 2021 as the meeting place of Joe Biden and Vladimir Putin in which the former attempted to dissuade the latter, unsuccessfully, from invading Ukraine. Well, at least he tried. 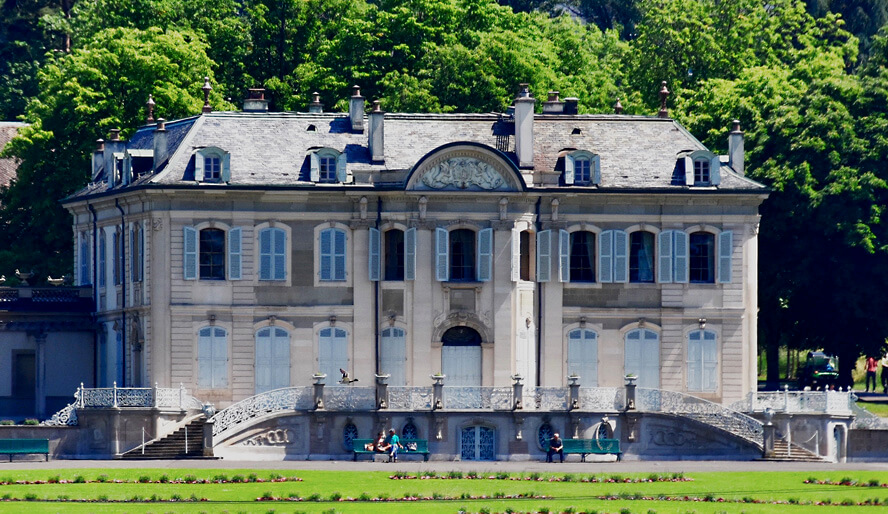 By now we were hungry and got a table at the outdoor terrace of the Le Montbrillant Hotel to sample a Swiss specialty from the Lake Geneva area. These are malakoffs which are essentially deep-fried cheese fritters the recipe for which was brought back to Switzerland by mercenaries fighting in the Crimean War. These ones were served with another Swiss specialty, cured beef. They both go perfectly with a nice cold glass of Geneva area chardonnay. Writing this now makes my mouth water with the memory of these wonderful little balls of flavour. 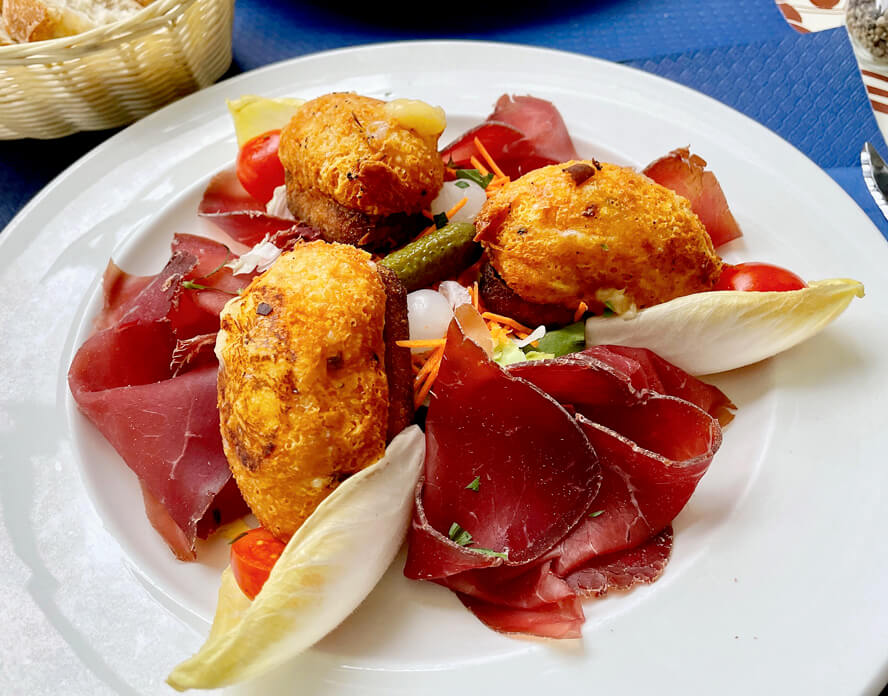 Alison opted for the shrimp and smoked salmon salad which was equally delicious. You really have to screw up like going to Mcdonald's or KFC to get a bad meal in Switzerland. 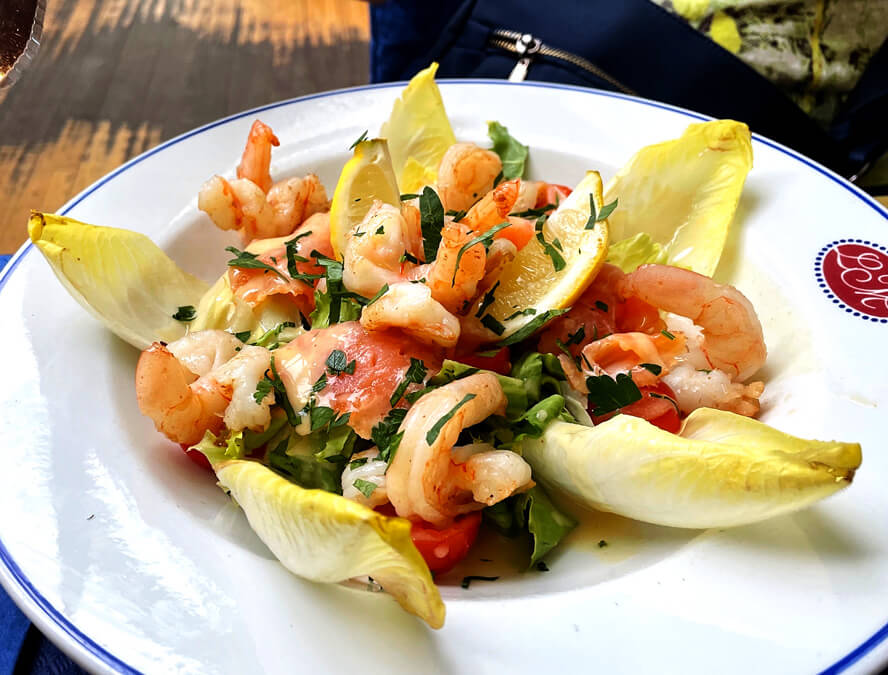 Well, that ends our far too short visit to Geneva. In the next post, we'll move on to another great Swiss city, Basel. I hope you'll join us.