In his latest blog post, Dale Dunlop, The Maritime Explorer, delves deeper into what makes Cappadocia a truly unique place to visit, Goreme Open Air Museum. If you are interested in what Adventures Abroad has to offer, please check out our Small Group Tours.

In the last post from this Adventures Abroad, Western Turkey Tour, our group finally arrived at the fairy tale landscape of Cappadocia. We had an all too brief and tantalizing look at the landforms that are unique to this region of Turkey, both for their distinctive shapes and for the uses that mankind has made of them. In this post we'll take a deeper dive into what makes Cappadocia a must visit destination for all world travellers, focusing on the Goreme Open Air Museum. Please join us on what should be a fascinating day.

As noted in the previous post, Goreme National Park and the rock formations of Cappadocia have been designated as a UNESCO World Heritage Site. I won't repeat the reasons for the designation which I set out in that post, but rather we'll visit a couple of the most remarkable places to view the rock formations and then we'll head for the Goreme Open Air Museum.

The rock formations of Cappadocia often called 'fairy chimneys' actually come in a number of distinct varieties including the first ones we'll see today. 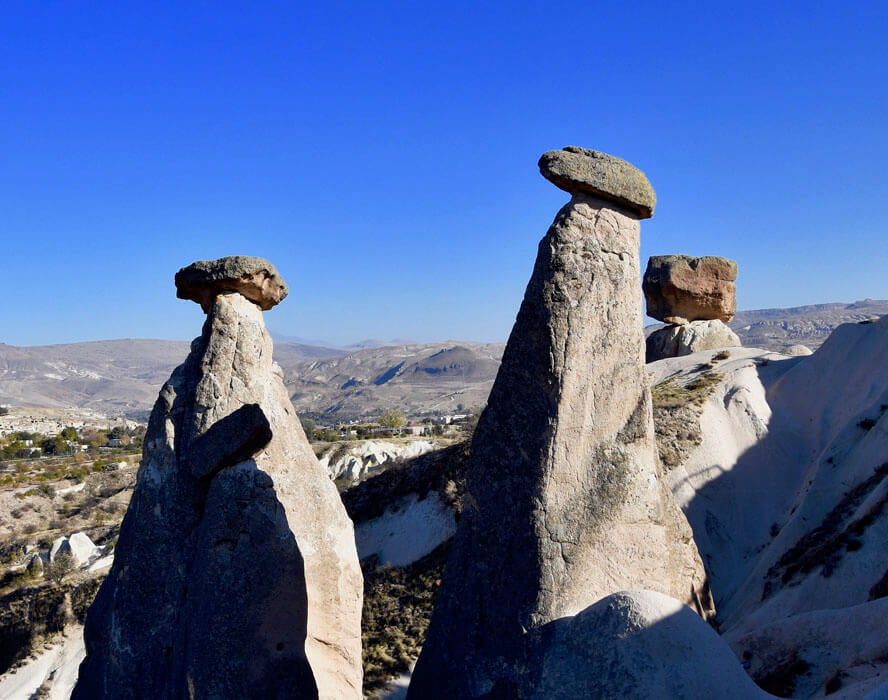 These are three great examples of capstone formations where the softer chimneys appear to be wearing a cap of harder stone in a manner that seems to defy gravity. Considering that Turkey is quite prone to earthquakes it seems miraculous that these formations have not lost their caps that have taken thousands of years to evolve through natural processes of erosion. This particular group is known as the 'Three Beauties'. Here's a closer look at the smallest one which actually has the largest cap. 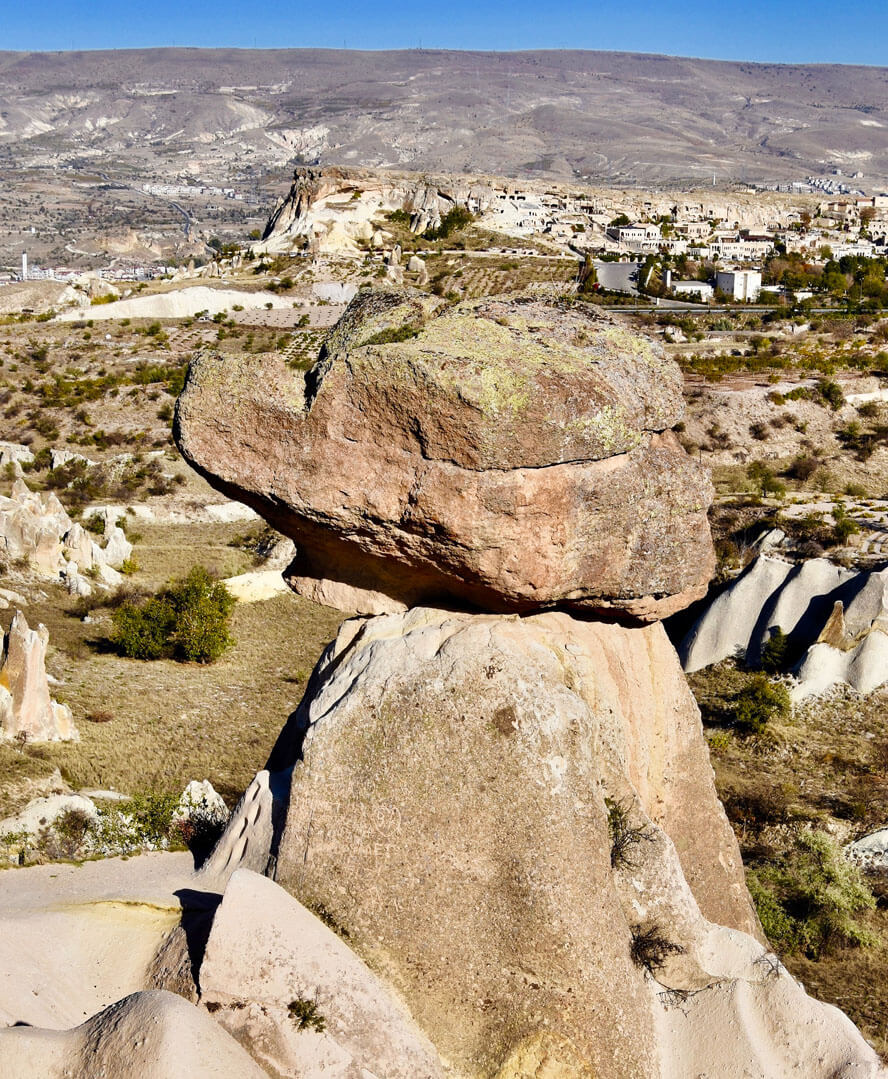 This is an example of a solitary capstone in Goreme National Park. It seems impossible to believe, but at one time the entire level of the land would have been even with the top of the capstone. 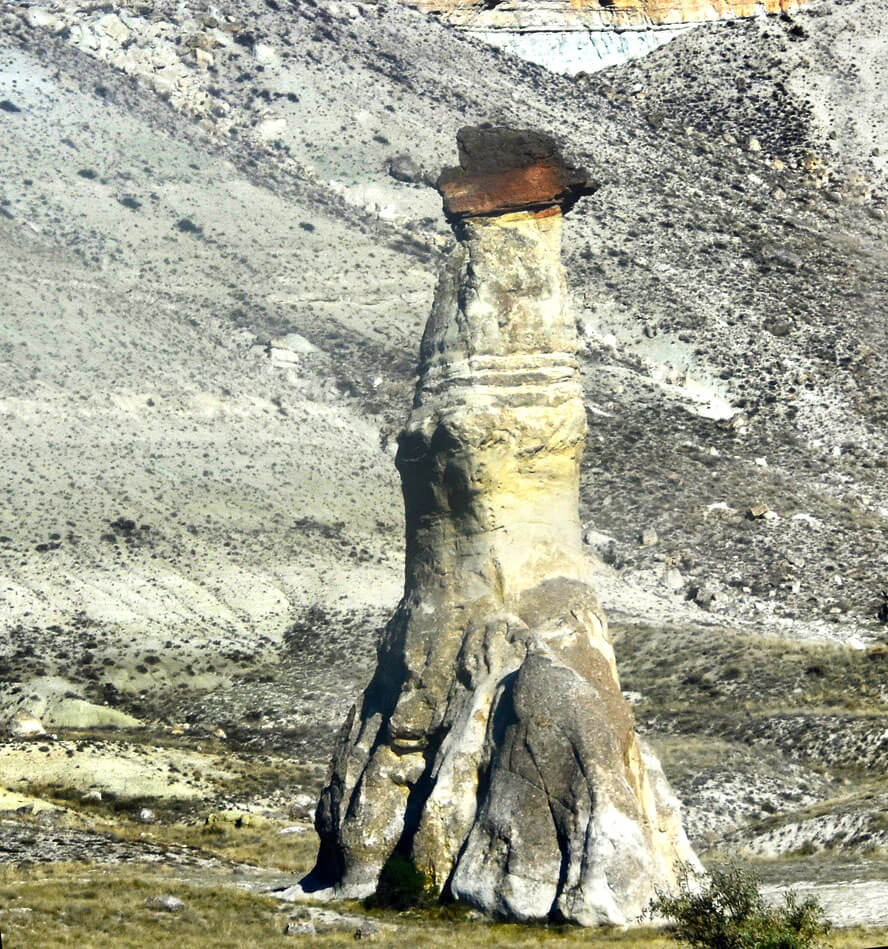 Another common type of formation found in the Goreme area of Cappadocia is the somewhat creepy looking pinhead fairy chimneys. 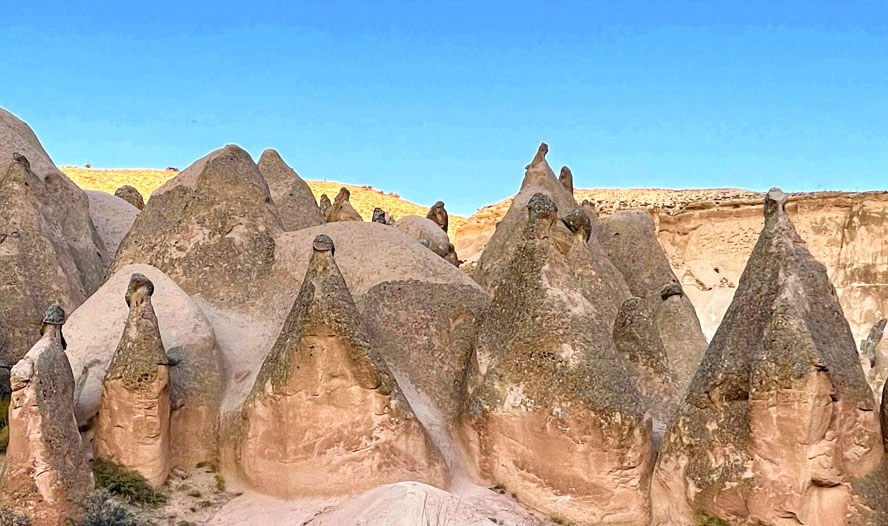 One of the most popular places to view the landscape of Cappadocia is Pigeon Valley, so named because of the thousands of small holes cut into the rocks to attract nesting pigeons. The farmers collect the pigeon dung and use it as fertilizer claiming that it produces the sweetest fruits in all of the country. That's the small town of Ortahisar you can see from Pigeon Valley. 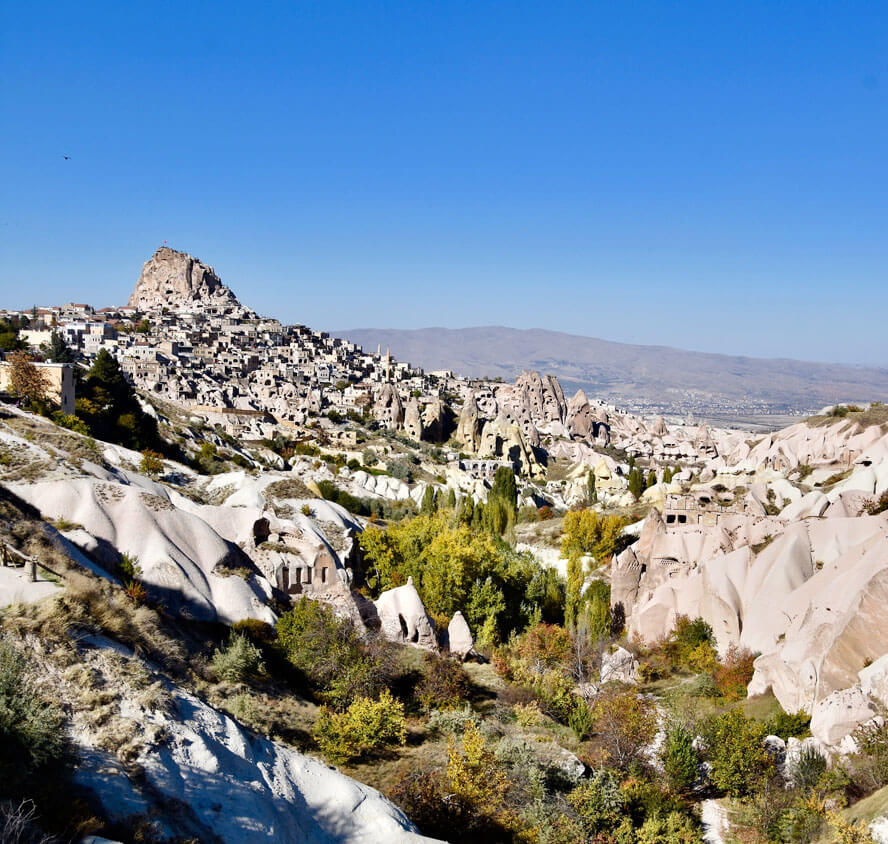 There are places in Pigeon Valley that look very much like the badlands of Alberta or the Dakotas. Here you can clearly see the small overlying layer of basalt on top of the much more porous volcanic tuff. In a million years or so ninety-nine percent of this landscape will be eroded away leaving only a few standing fairy chimneys. I'm glad we already have existent chimneys as a million years is a long time to wait. 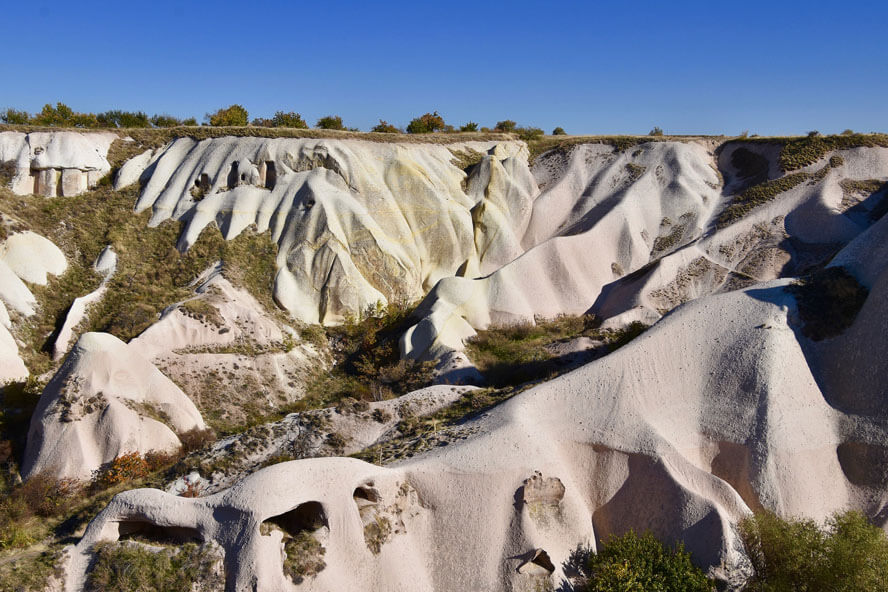 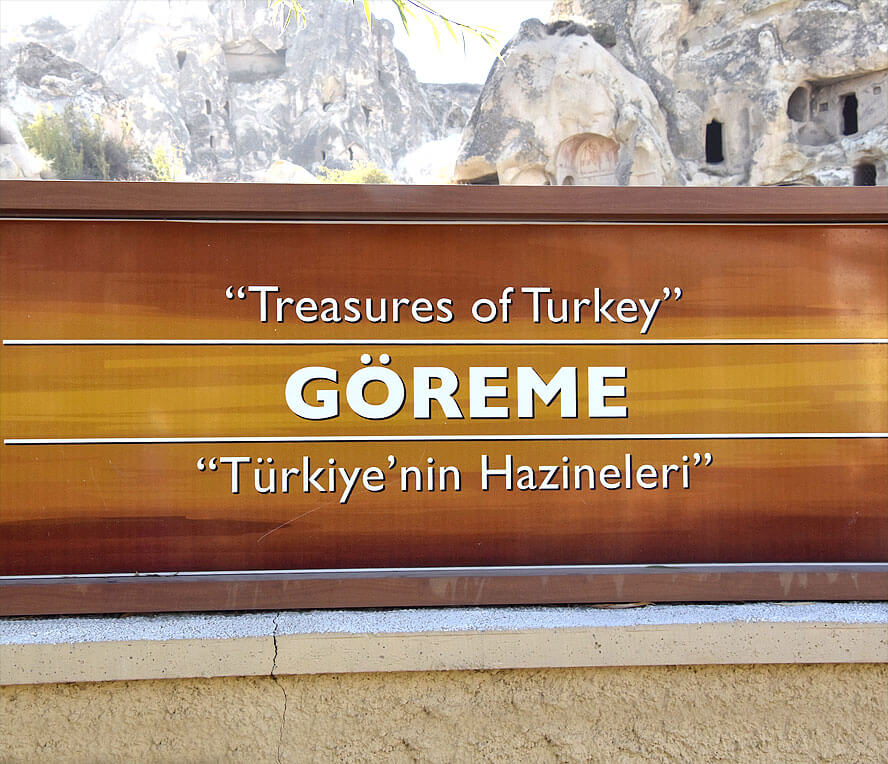 Cappadocia has a number of what are referred to as 'Open Air Museums' of which Goreme is the most significant. These all preserve areas where human habitation has made use of the soft volcanic tuff to create dwellings of various sizes from small family homes to large ecclesiastical complexes. At Goreme, our Tour Leader Yasemin Reis will lead us on a designated route through an area that comprises fifteen churches and eleven refectories, all dating from the 11th century. In researching this post I came across a lot of contradictory evidence about who, why and when the man-made structures of Cappadocia came to be. I believe this link to the Goreme Open Air Museum is the most reliable.

Essentially the first use of the soft rock was to cut burial chambers much as we have already seen in Lycia. This was as far back as the pre-Christian Roman Empire and continued as Christian burial sites after the empire was converted. Around 800, monks started carving out small monasteries and by the 11th century, these evolved into the full-blown churches and chapels that we are now about to see. Yasemin explains, as does the link, that there are three distinct styles of church interiors. The most elaborate are those that have been plastered and painted. Less elaborate are the panelled interiors that have simple images and the least decorative have just geometric shapes. Ordinarily, you would think that there would have been a chronological progression from simple to more complex interiors as techniques were refined over time, much as occurred in the Renaissance. Not so at Goreme. As Yasemin tells us, it all depended on who was building the churches. If there was money to spare then the pros were brought in to do the paintings over the fresh plaster. If there was not much money then the best local talent was used and they created simpler, but still captivating images in some of the churches. Lastly, if there was no money and no talent then the doodlers got to work producing the geometric patterns on the least decorative interiors. Thus Goreme has all three types of interiors all dating from approximately the same era.

This simplified map shows the counterclockwise route we followed in the Goreme Open Air Museum. I'll identify the sites on the map by both English and Turkish name so the map will make more sense. 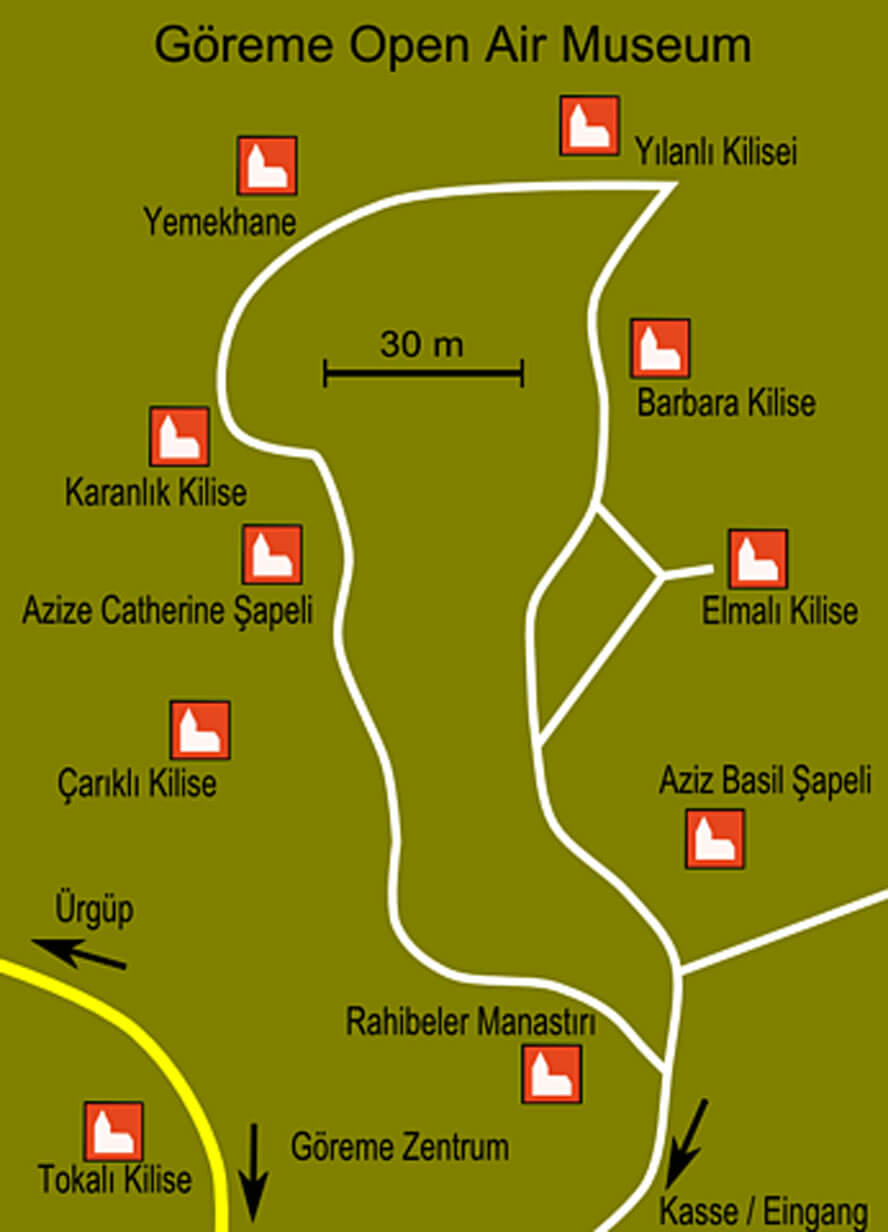 So let's begin our walking tour. Unfortunately, photography is only permitted in a very few of the interior spaces so most of this tour will be confined to what you can see from the outside, but after all, it is an 'open air' museum. 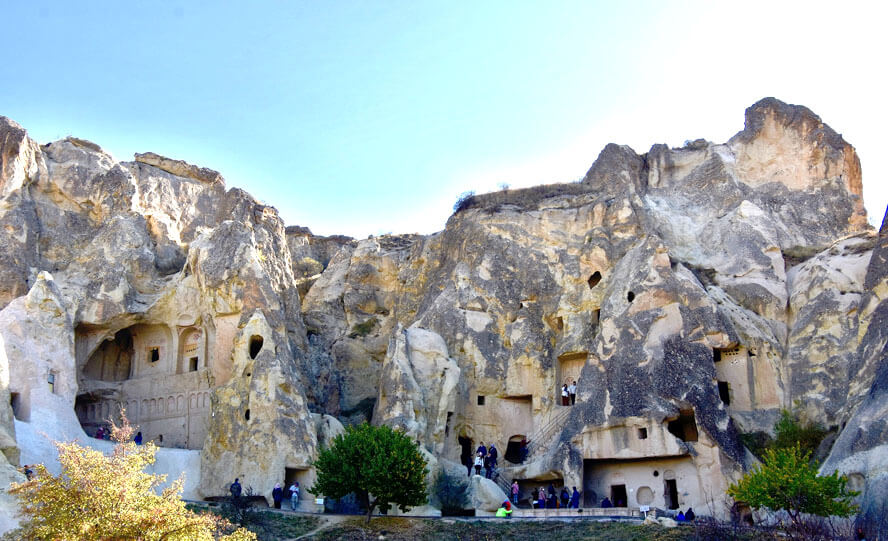 The first structure we see is perhaps the most impressive. This is the Nunnery which looks like a pockmarked termite mound but actually has seven distinct floors. Imagine living the life of a celibate nun in this place? Actually, there is no consensus that it was a nunnery, but the name has stuck. 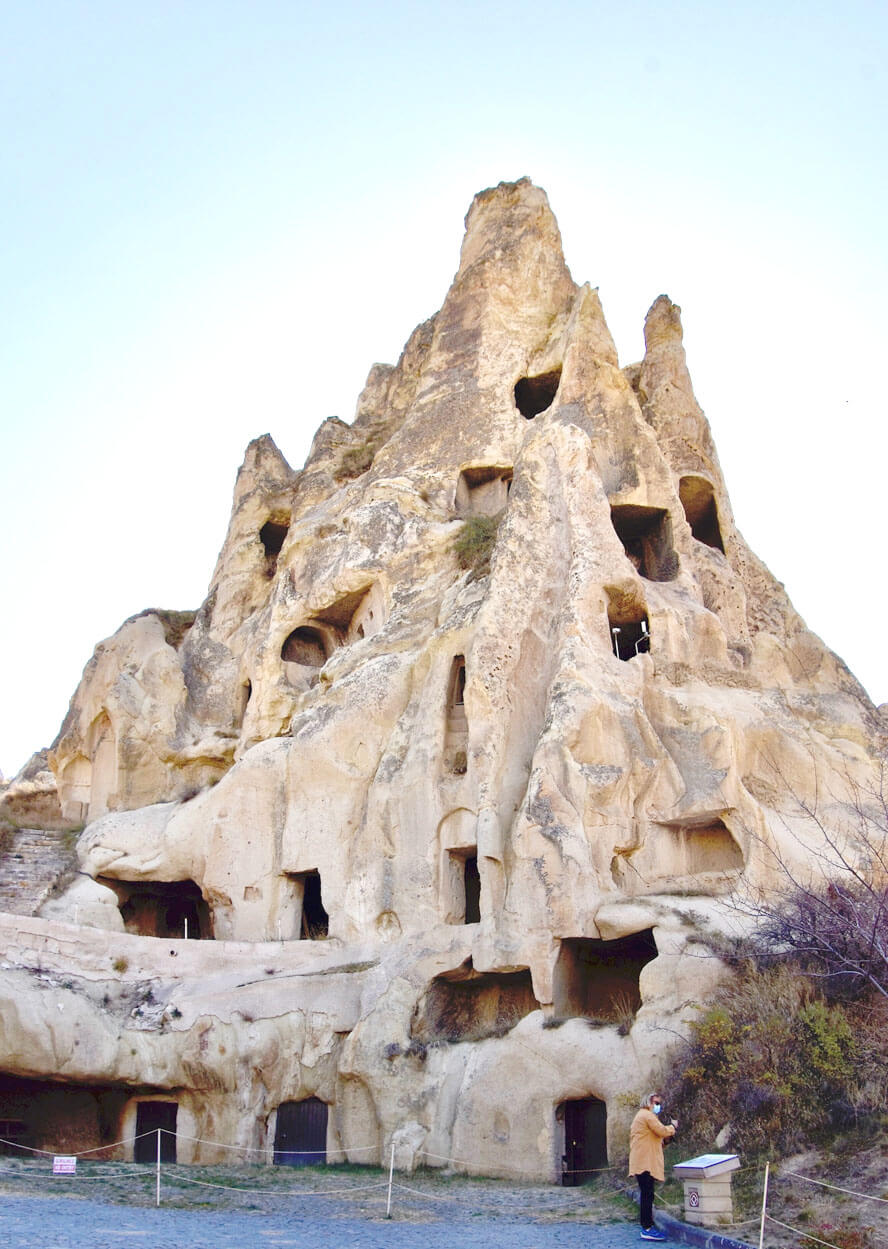 Next to the Nunnery is St. Basil's Chapel (Aziz Basil Sapeli) which is one of the few places where interior photography is allowed. St. Basil was the founder of Byzantine monasticism and is one of the most important figures in Eastern Orthodox Christianity. This is a painting of St. Theodore done in the panelled style i.e. talented amateur. He was renowned for killing a giant snake that terrorized the area he lived in and that is exactly what he is doing in this painting. 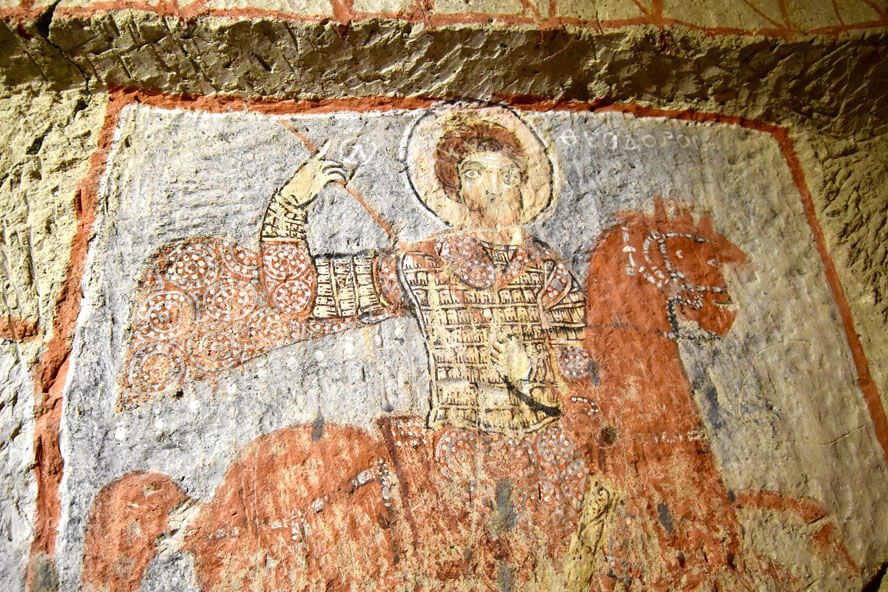 But if Theodore could kill a giant snake St. George could outdo that by killing a dragon which is exactly what he is doing in this painting. 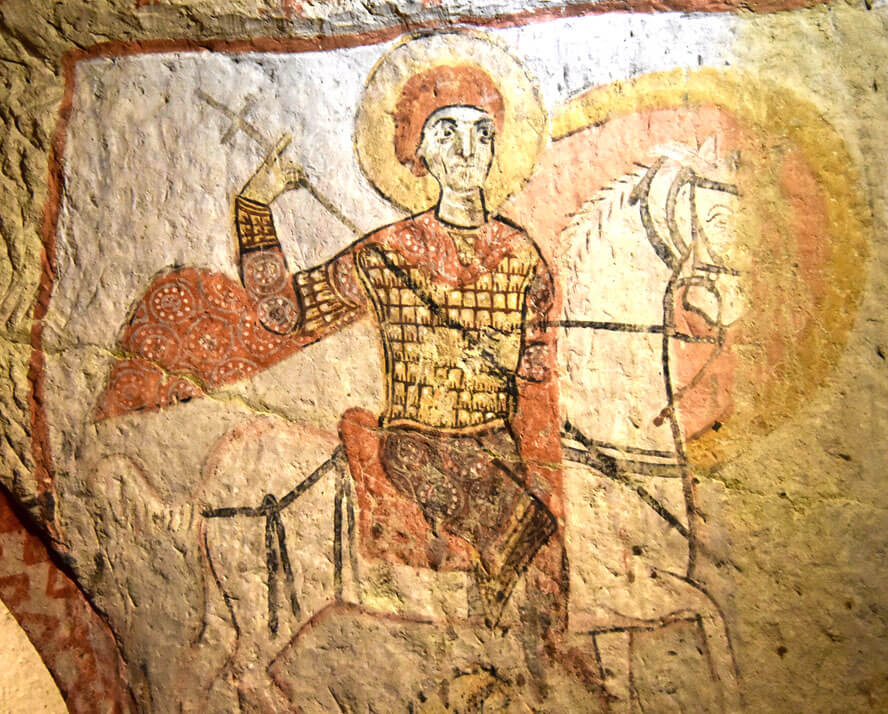 Monks and nuns weren't the only critters living in Goreme as evidenced by these pigeon holes. 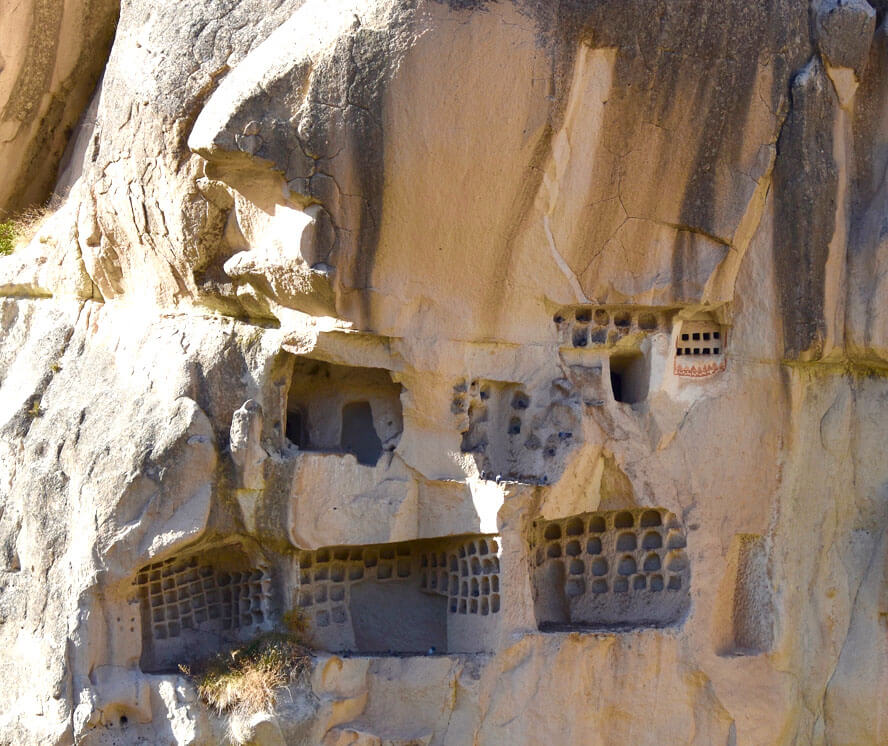 Next, we come to this very tiny entrance to what is known as the Apple Church (Elmali Kilise). It sure doesn't look like much, but the interior is spectacular. I had no luck finding decent public domain photos of the interior, but you will see them by following the link. The contrast between the quality of these frescoes and those from St. Basil's is stark, to say the least. 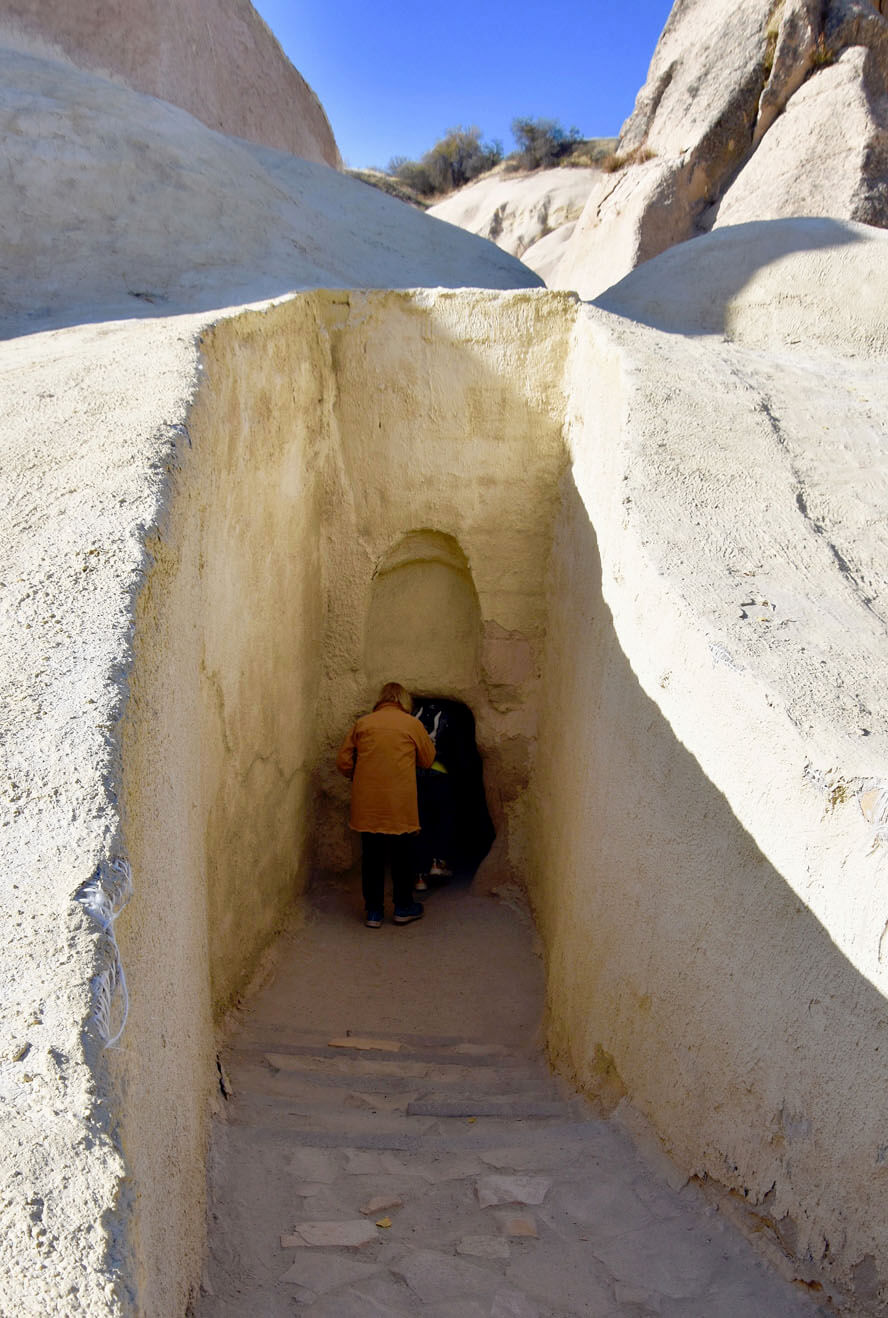 Here is the modest entrance to the Church of St. Barbara (Barbara Kilise) which is famed for its intricate red geometric patterns that you can see by following the link. They are as different from the frescoes of the Apple Church as you can imagine but equally intriguing. 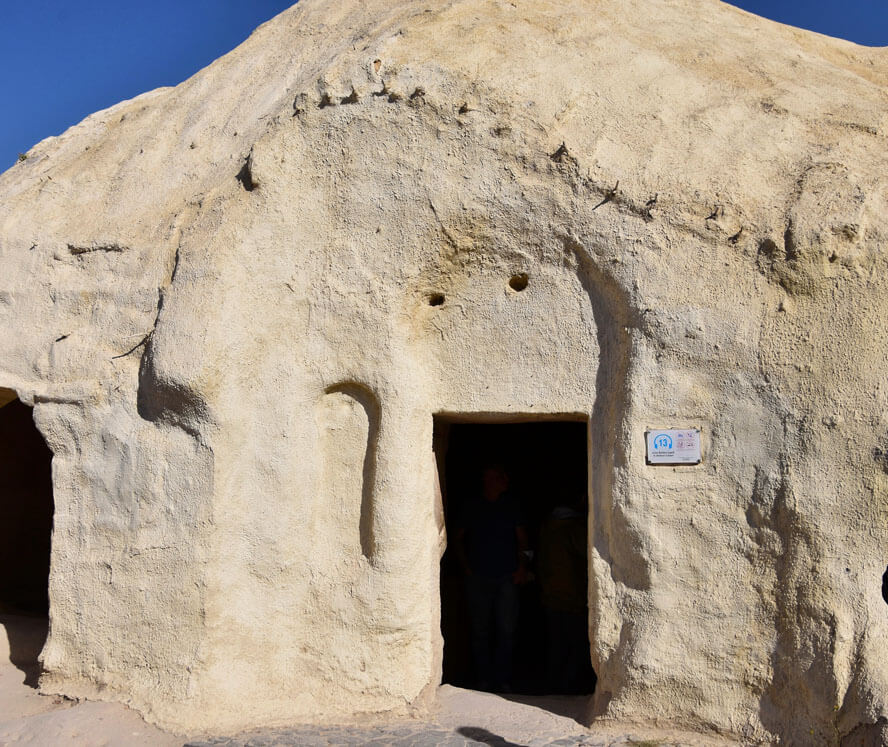 There is a separate fee to enter the Dark Church of Goreme (Karanlik Kilise) which is definitely worth paying as it has the best frescoes in the entire complex. Once again to see them please follow the link. What you can photograph is the exterior which has multiple Maltese crosses and a very Islamic-looking doorway. 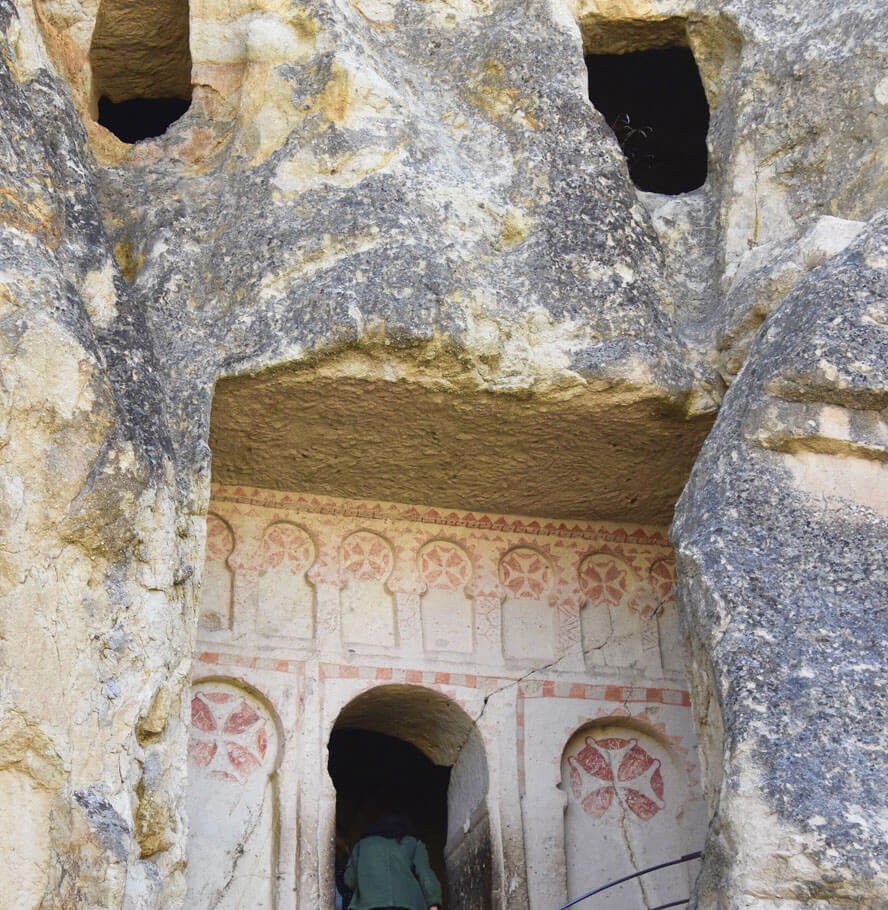 There is also a great view of Goreme looking down from the entrance. 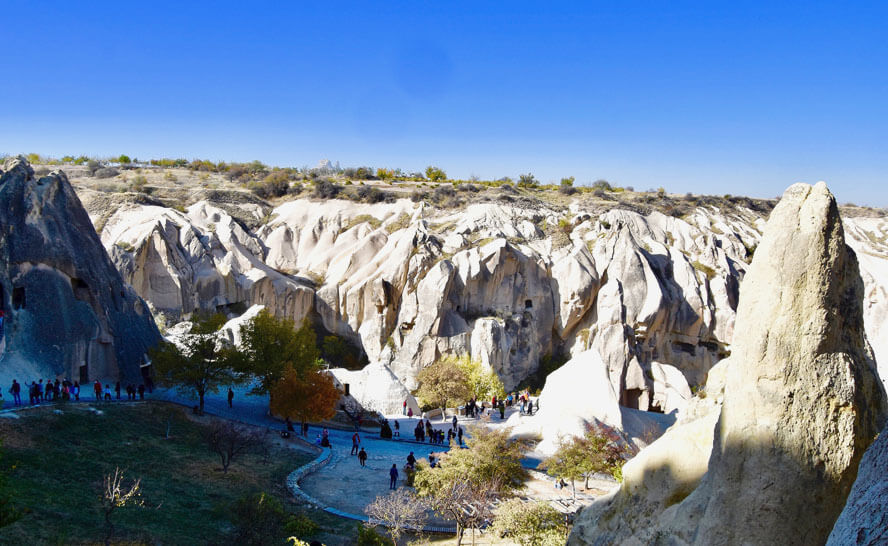 View of Goreme from the Dark Church

Next up on the tour of the Goreme Open Air Museum is the Chapel of St. Catherine (Aziz Catherine Sapeli) which has suffered extensive water damage requiring major restoration. The link will show some of the interiors. 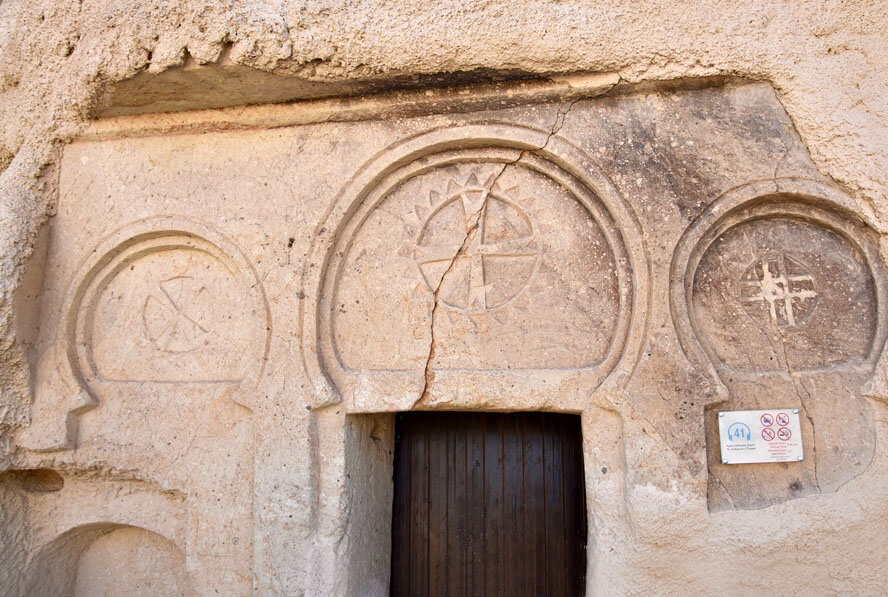 The penultimate church we visited was the Sandal Church (Cariliki Kilise – Cankli Kilise on the map) so named for a set of sandaled footprints on the floor that were claimed to be made by Jesus. How he got this far from the Holyland is open to conjecture.

These exterior Maltese crosses are examples of the geometric style which we saw in much more detail in the interior of the St. Barbara Church. 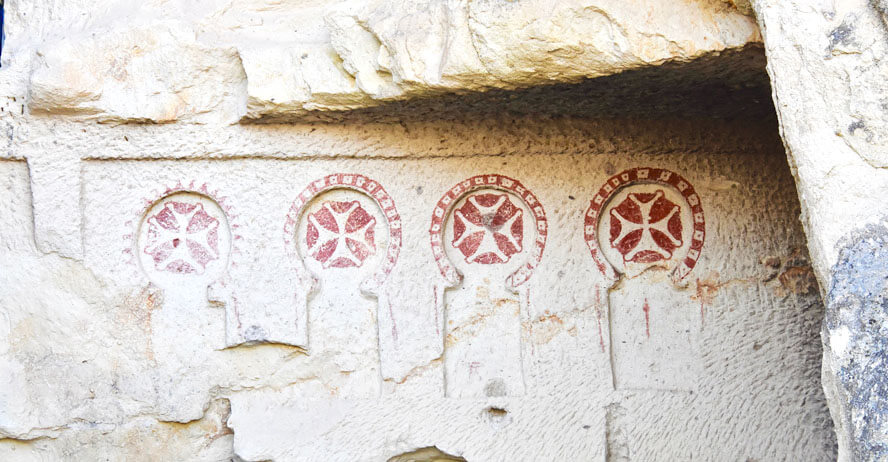 Decoration on the Exterior of the Sandal Church

While you can't take pictures in the church proper you can in the refectory which is below it. The refectory is an ecclesiastical word for dining room and was where the monks took their communal meals. This is the carved stone refectory of the Sandal Church. Considering that it would only have been lit by candle or torch light it must have been a gloomy place to eat. 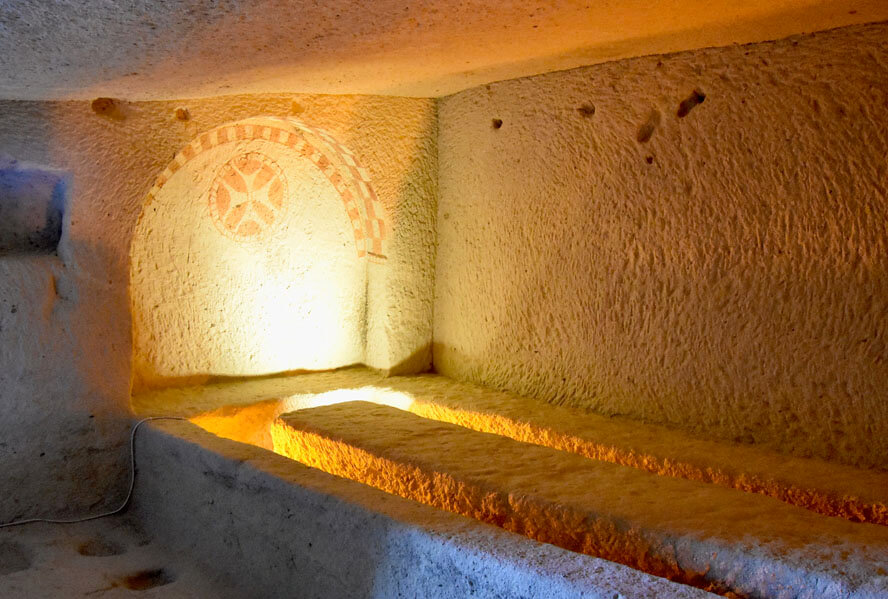 Refectory Below the Sandal Church

There is one final church to see at the Goreme Open Air Museum which is quite separate from the others we have visited. The Buckle Church (Tokali Kilise) is reputed to have the finest frescoes in all Goreme. It has a very different exterior than the other churches we have visited and the interior is simply magnificent. 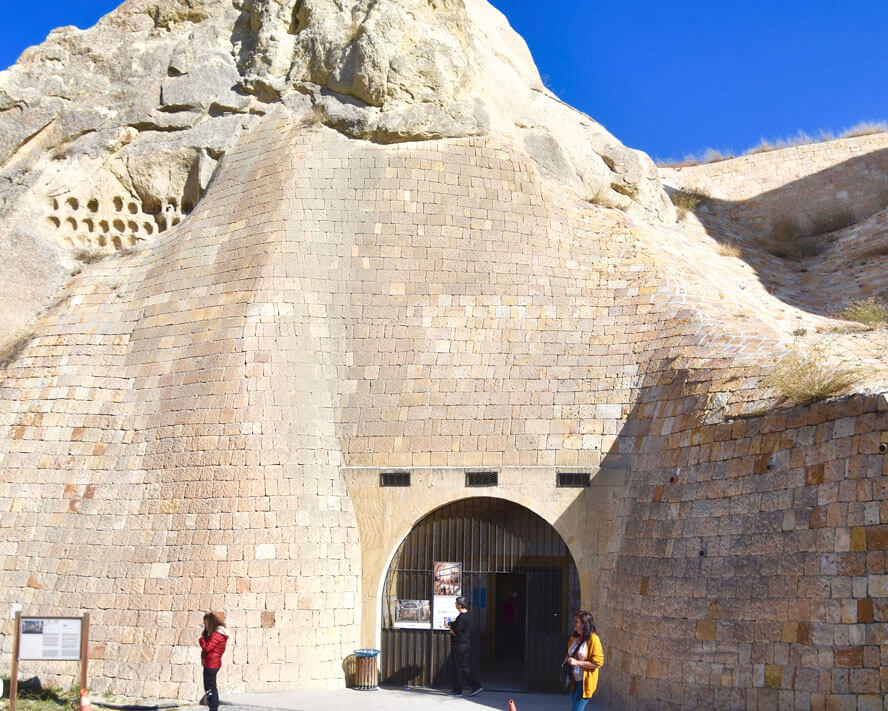 The Buckle Church has antecedents well before the 11th century and developed from a simple hermitage to the largest of the churches in Goreme. It is one of the few that has an interior large enough to really give the feeling you are inside a church and not some claustrophobic little chapel. I was able to obtain this picture from the Cappadocia History website which will leave the reader with some idea of the beauty of these churches in Goreme that don't look like much from the outside. 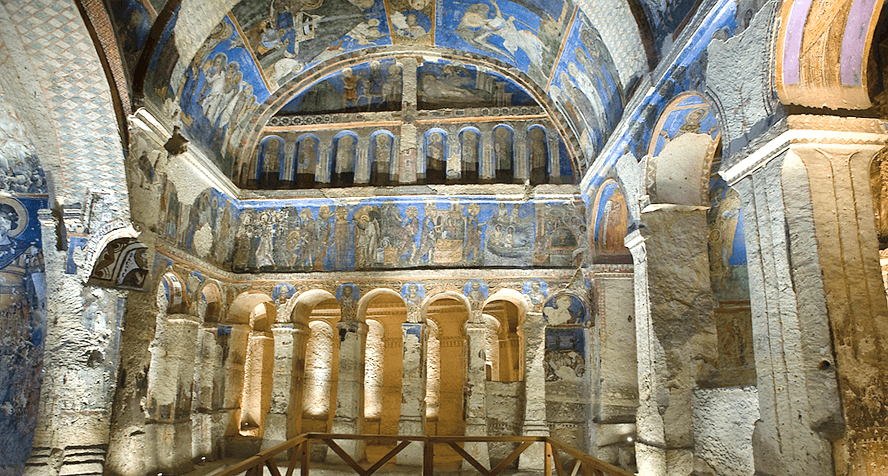 That concludes our tour of the Goreme Open Air Museum or at least the churches. You do have the option of getting dressed up like a harem girl and riding a camel, but nobody in our group opted to be that idiotic. 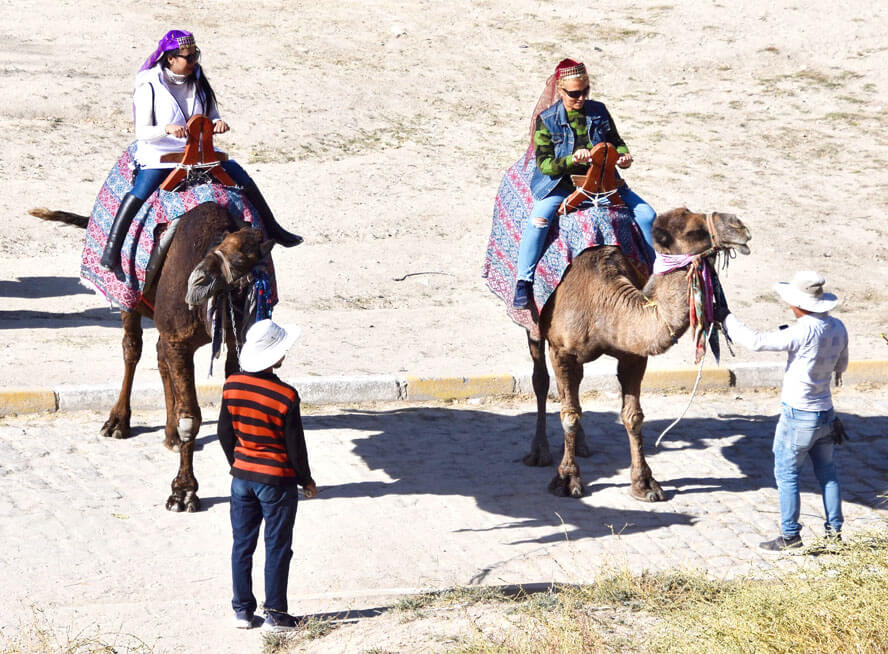 In the next post, we'll do the very opposite of what we did at Goreme. Instead of the open air, we will descend to the underground city of Derinkuyu. It's not a descent for the faint of heart, but a must-see in Cappadocia so I hope you'll join us and our guide Yasemin there.