In his latest blog post, Dale Dunlop, The Maritime Explorer, goes on an exciting excursion in search of the Spinner dolphin with world-renowned expert Dr. Michael Poole. If you are interested in what Adventures Abroad has to offer, please check out our Small Group Tours.

In the last post, our Adventures Abroad tour of French Polynesia took a fast ferry to the beautiful island of Moorea and began our stay at the excellent Manava Beach Resort. In this post, we'll begin exploring the island and its marine inhabitants from the comfort of a boat that has come to pick us up at the resort's wharf. However, this will be no ordinary boat ride as it will be led by a man who is a legend in the South Pacific for his relentless efforts to preserve the marine ecosystems that are among the most diverse on the planet. I am referring to Dr. Michael Poole who is to dolphins and whales what Jane Goodall is to chimpanzees. In fact, he has based his decades-long study of dolphins and whales on her model of staying essentially in one location to learn as much as possible about the species in that area, in particular spinner dolphins. Please join us as we head out for a dolphin watch on what I am sure will be one of the highlights of this trip.

The accomplishments of Dr.Poole are too numerous to set out in detail in this post – please follow the link for his biography which includes many academic papers and books, numerous television documentaries and other achievements. However, by far the most important has been his role in spearheading the effort to have an area half the size of the continental United States designated as a dolphin and whale sanctuary. His persistence paid off in 2002 when the government enacted legislation he drafted to create one of the largest marine sanctuaries in the world. We often used to see the popular bumper sticker Save the Whales when some countries were still killing them for no sensical reason. Well, this is the guy who has done more to accomplish just that than perhaps anyone else. So let's meet him and his crew and get this dolphin watch underway. 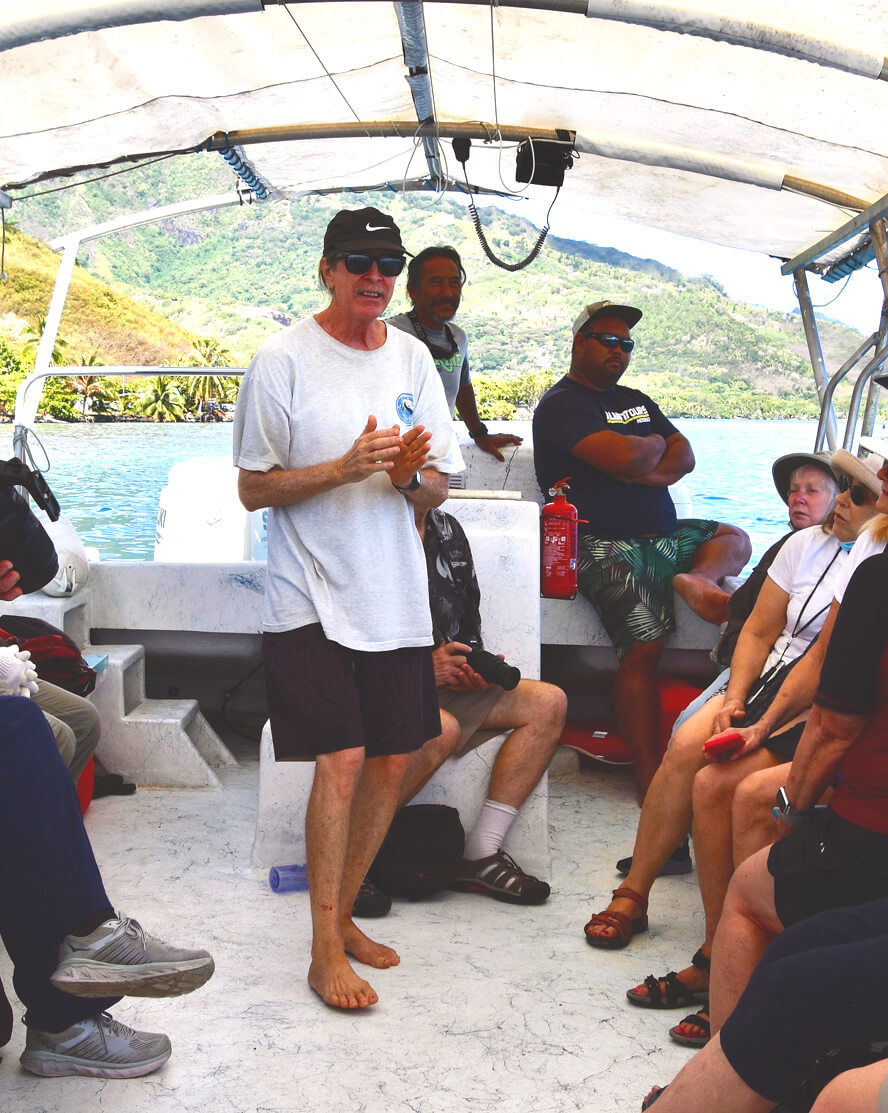 This is Michael and his two-man crew as well as the rest of us. His enthusiasm for what he does is readily apparent and he is eager to share his insights into dolphin behavior acquired over the past four decades. Given the time of year, we are not going to see any of the humpback whales that migrate through the waters of French Polynesia between July and November, but he guarantees that we will see spinner dolphins. After all, it is a dolphin watch.

I first encountered spinner dolphins at the Mote Marine Laboratory in Sarasota, Florida many years ago. In 2013 I saw them in the wild off Kealakekua Bay on the island of Hawaii and they put on a show I will never forget. However, on that day our boat never got closer than several hundred yards to the pod. Hopefully, on this dolphin watch, we'll get a closer look.

Even if we didn't see any dolphins, it is readily apparent that being on the water off Moorea is going to be a fabulous experience. This is a look back at the Manava Beach Resort just after we pull away from the wharf. The colour of the water is the very definition of aqua. 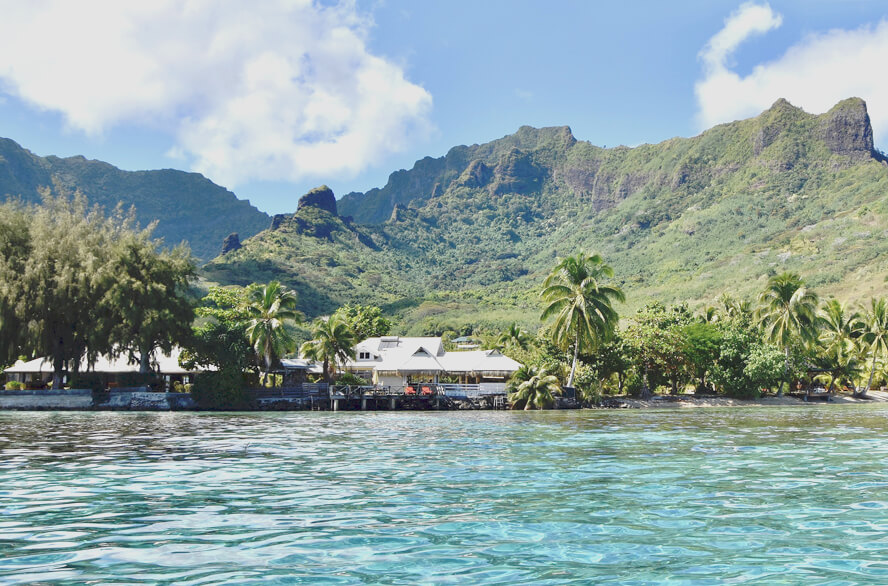 We aren't more than a few minutes out when we spot our first school of spinner dolphins. Michael is able to identify many of the animals by the names he has given them. They are smaller than the bottlenose dolphins most of us are familiar with from the days of Flipper.

The leader of this group is Bullet who has a distinctive hole in his dorsal fin that looks like it might have been made by a passing bullet, but more likely is the result of a shark encounter. Contrary to what many believe, dolphins are vulnerable to shark predation, but by remaining in large schools or pods (both terms are used interchangeably) the odds are considerably reduced. 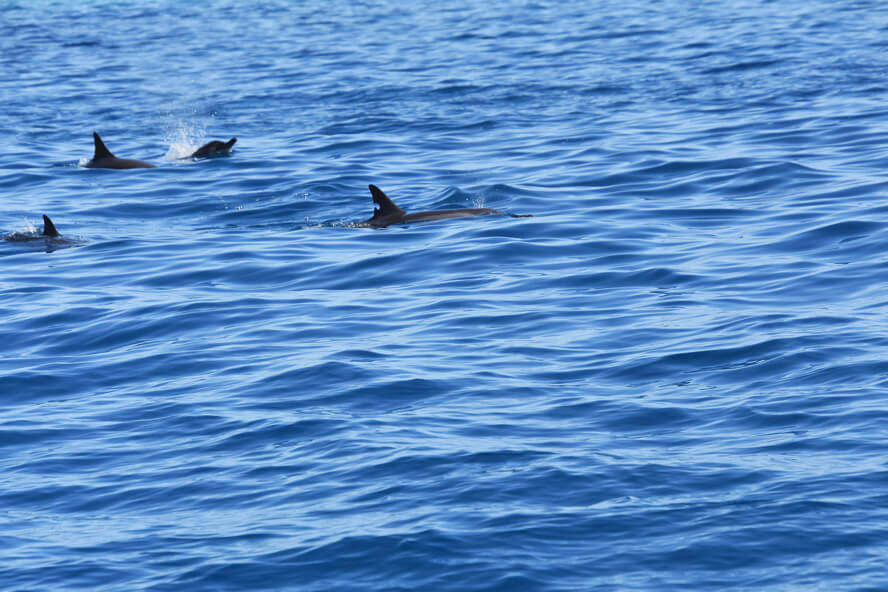 The first school of dolphins on this dolphin watch are clearly interested in those creatures in that strange floating contraption, but Dr. Poole makes it clear that he does nothing to intentionally attract them or in any way affect their behavior. We are here to observe only. 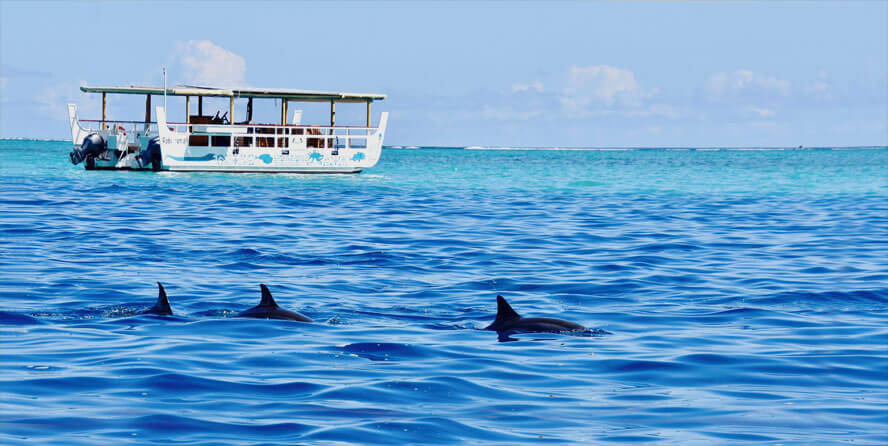 Spinner Dolphins Near the Boat

When most people think of dolphin antics they associate it with the rainbow-arced leaps they take out of the water, often in the wake of a passing boat. While spinners also do a version of this, they are named for their spectacular vertical leaps followed by 360° or more spins that would be the envy of any figure skater. That is what I witnessed in Hawaii but from a great distance. I am hoping for some close-up spinning on this dolphin watch.

Here's a video from Spydolphin showing spinner dolphins in action. It's a preview of some of the types of maneuvers you might see on Dr. Michael Poole's dolphin watch, but not on the scale shown in the video. Michael explains that the pods usually number up to thirty or more dolphins and that sometimes they join up into larger groups, but not often.


But here's the thing. We do get some really interesting jumps, but I'll be damned if they ever happen when my camera is ready for them. You get a leap and then focus the camera on that dolphin and then another one leaps somewhere and you turn to get it, but too late. It reminded me of the old Looney Tunes cartoon where Michael J. Frog sings and dances his heart out to the protagonist, but whenever he tries to point it out to someone else it just goes 'ribbit'. I guess what I'm trying to say is that the photos on this post are not remotely as interesting as what we actually saw on the dolphin watch.

The First Group Moves Away

After the first pod moved off we were treated to some amazing views of Moorea from the sea. This is the entrance to Cook's Bay where Michael points out that Captain Cook never actually laid anchor. That was in the bay next door, but once the name was given, mistakenly or not, it stuck.

This is from further into the bay. 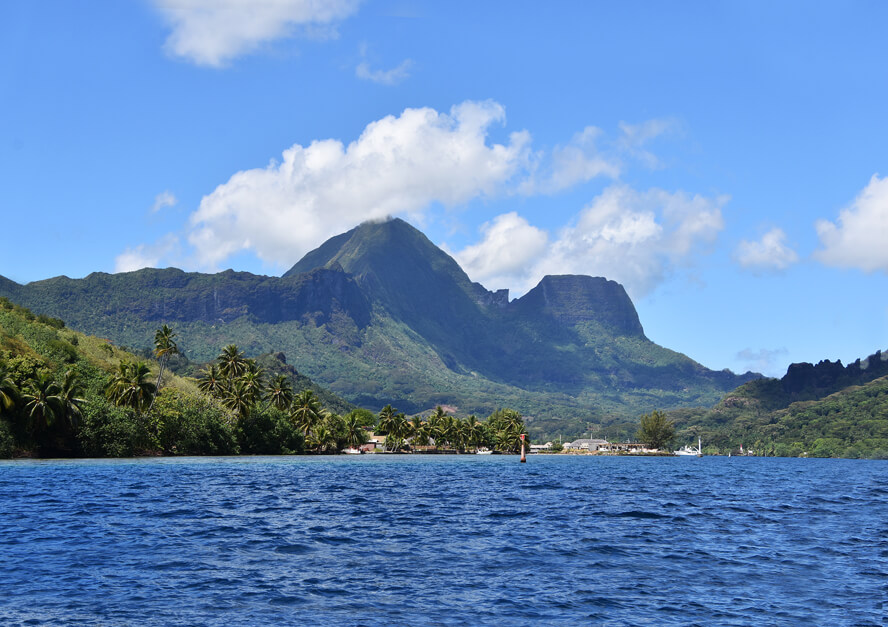 This interesting-looking boat appears to be a research vessel of some sort, but it's actually the superyacht Arctic which was converted from a deep water salvage tug to a luxury yacht capable of sailing in the harshest Arctic and Antarctic conditions. It holds only a dozen passengers but has a crew of 28. The link has photos of the incredible interior. Why it's forsaking its name and sailing in the South Seas we can only ponder, but as between freezing your butt off or basking in the tropical sea off Moorea, the choice would not be too difficult. 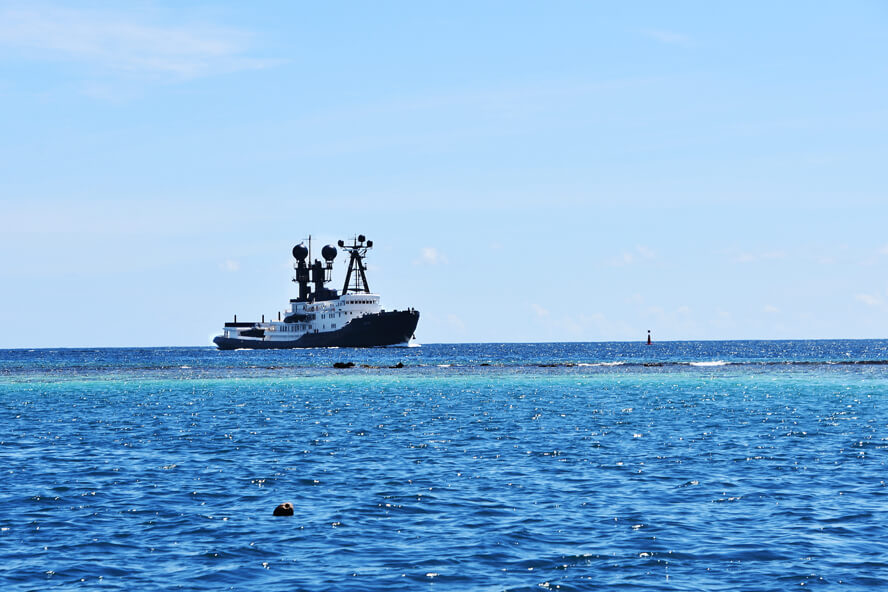 The Arctic Coming into Cook's Bay

Near the head of Cook's Bay, it becomes clear that it is a haven for sailors. I mean who wouldn't want to anchor in a place as beautiful as this? Jimmy Buffet did some time ago and came up with the song One Particular Harbor as a result.

As we leave Cook's Bay and head into Opunoho Bay where Cook really did anchor, the amazing pinnacle known as Mount Rotui comes into view. The rugged topography reminds me of Skull Island, the home of King Kong.

Here's a closer look. It's incredible that as steep as its slopes are, it is covered in vegetation. 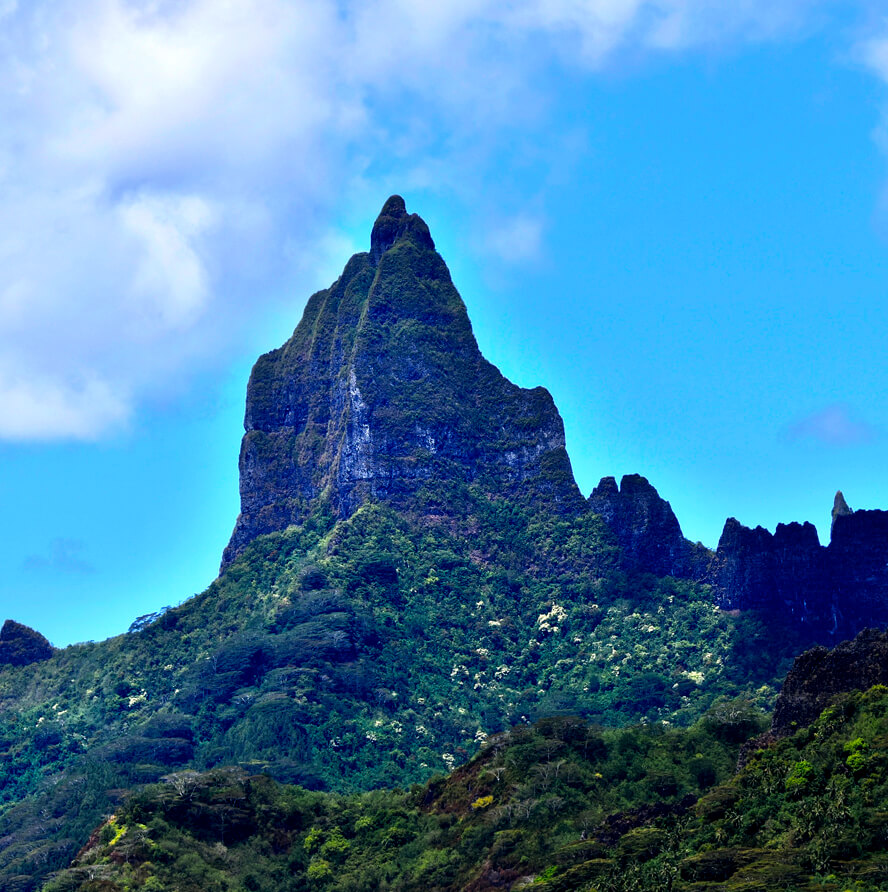 As mind-blowing as this scenery is, we are on a dolphin watch so Michael directs our attention to an approaching pod of spinners, a completely different group than the first ones we saw.

This pod comes right up to the side of the boat.

Close to the Boat

These dolphins are also more into aerial maneuvers than the first, but as usual, all I get is the splash after the spin. 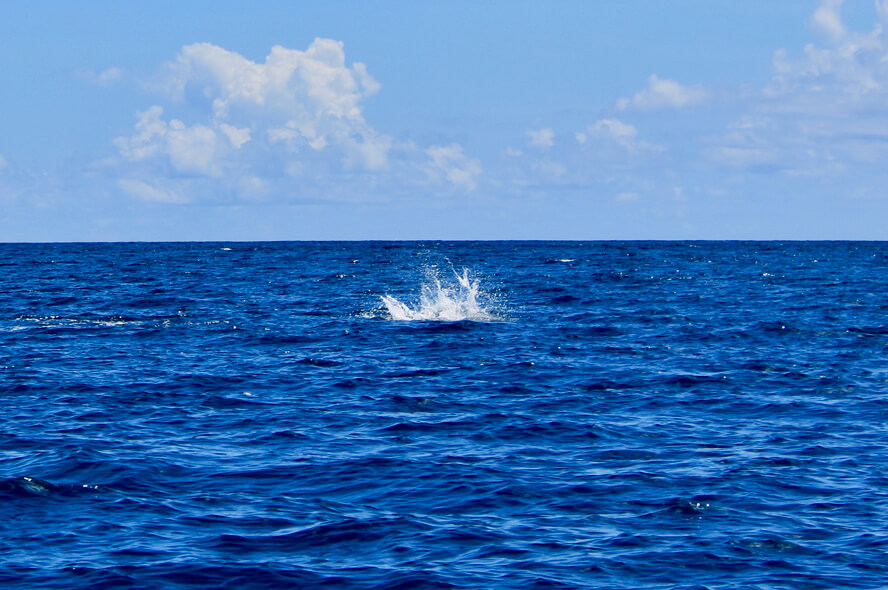 Or if I am in the right spot the dolphin decides not to spin, but just do a little jump instead. Whether you end up getting good photos or video on this dolphin watch is really beside the point. It is just a joy to watch them and know that thanks to the efforts of the man we are sharing the boat with, these spinners will be protected in their natural habitat for ages to come.

No Spin For You

As we head back to the Manava Beach Resort we pass a number of luxurious waterfront homes along the way and a spot that has special significance for Canadians. There was once a Club Med on this coast and it was here that Pierre Trudeau first met Margaret Sinclair and of course, in time, beget our current Prime Minister. 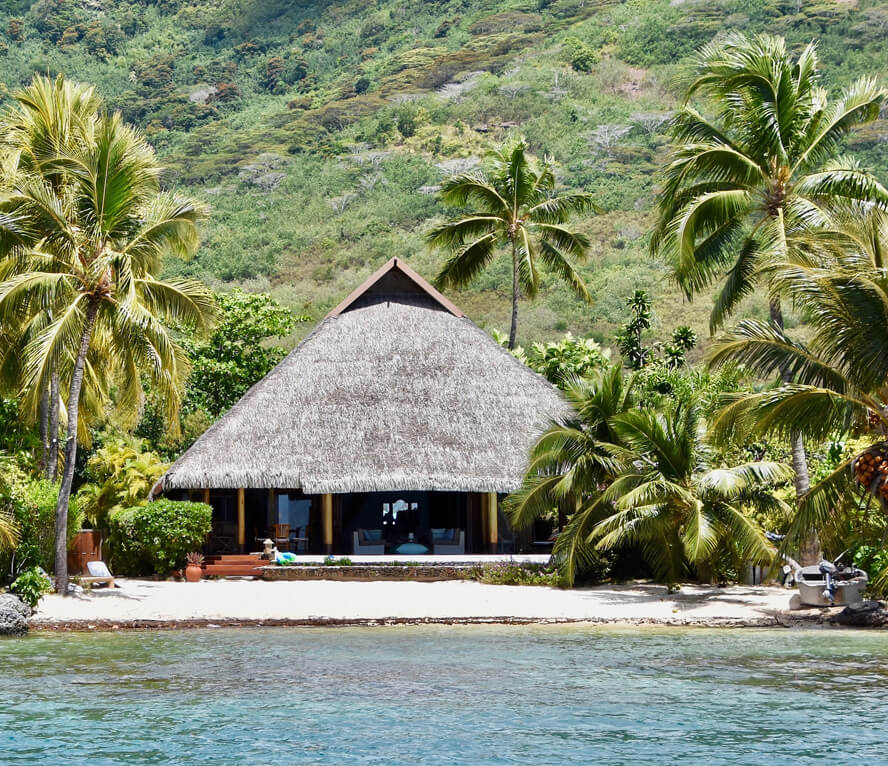 And so our dolphin watch cruise ends, but we are not finished touring Moorea. In the next post, we see the island highlights as we circle Moorea by bus. I hope you'll join us.

Published on 22 July 2022
< Cappadocia - Where and What Is It
Goreme Open Air Museum >
Recent Blog Posts
Switzerland with Adventures Abroad
Goreme Open Air Museum
Dolphin Watch with Dr. Michael Poole
Cappadocia - Where and What Is It
Manava Beach Resort - Heaven in Moorea
Via Egnatia with Adventures Abroad
Can't find what you're looking for?