Perge - Walking in the Footsteps of St. Paul

In his latest blog post, Dale Dunlop, The Maritime Explorer, has his walking boots on as his global trekking takes him to Perge - Walking in the Footsteps of St. Paul. If you are interested in dates and prices for this trip please check out our Small Group Tours to Turkey!

In the last post from this ongoing series on western Turkey with Canadian tour company Adventures Abroad we visited the great theatre of Aspendos and marvelled at the Roman engineering feat of the inverted siphon aqueduct that brought water to that city. In this post, we'll visit Perge, a much larger archaeological site not far from Antalya which was one of the most important cities in Anatolia during the Roman Empire. During our visit to the Antalya Archaeological Museum, we had a chance to view some of the finest examples of statuary produced in Perge during that era. Today we will see where those statues were created and where they stood on public display. Please join us as we visit one of the best-preserved Roman cities anywhere.

There really isn't a need to go into any depth on the history of Perge because it's pretty well the same as all the other sites we've already visited, except Troy. It started with Hittites and Neo-Hittites, followed by Greek colonists, then Persian invaders eventually ousted by Alexander the Great with a period of Hellenic rule succeeded by the Romans, Byzantines and finally the Turks. The story of its founding according to Greek mythology is a different matter. By legend, it was founded by the rival seers Mopsos and Calchas fleeing the Troad after the destruction of Troy. They are very interesting characters. Calchas was the one who told Agamemnon that he had to sacrifice his daughter Iphigenia to get the favourable winds to sail to Troy, which he did and it ultimately led to his murder by his wife Clytemnestra. Calchas also is an important figure in the Iliad and Shakespeare's Troilus and Cressida. However, assuming he really did find Perge along with Mopsos here is the best story about Calchas because it would have taken place on the ground we are about to walk. As I noted, Mopsos and Calchas were rival seers. They decided to engage in a soothsaying contest in which Mopsos predicted the date of Calchas death in the near future. When that day dawned Calchas was still alive and thinking he had bested Mopsos began to laugh so hard that he keeled over and died. I love these crazy Greek myths.

Aside from legend, just because the history of Perge is similar to that of other places we have already visited that doesn't mean that there's nothing new to see here – every site is different and has its own unique features. One that applies to Perge is that it was one of the first sites where St. Paul is known to have preached as noted in Acts 14:25, although unlike Ephesus it did not get a book of the New Testament named after it.

This is an aerial view that gives an idea of the size of the place which is only 15 km. (9.3 miles) from Antalya. So let's get going, we've got a lot to see. 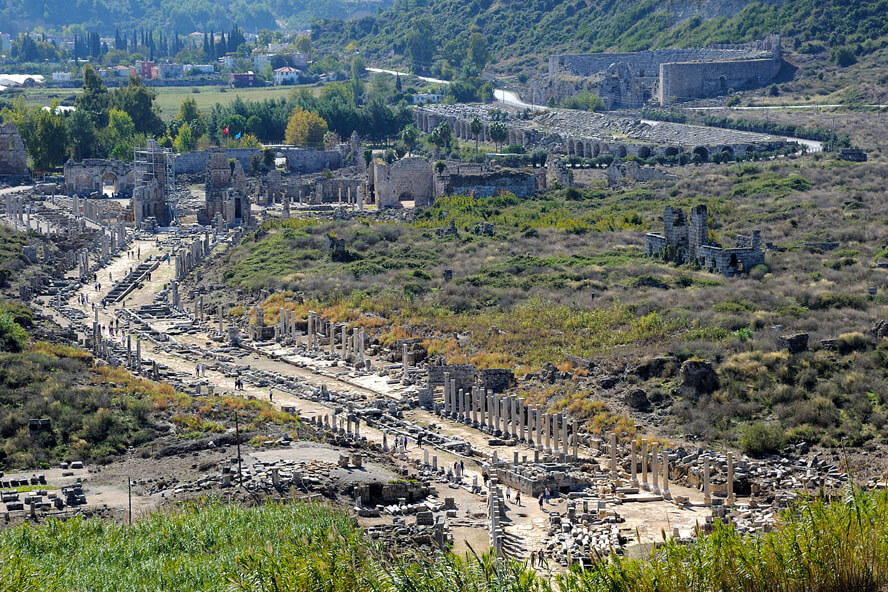 The parking is at the north end of the site, near the theatre you can see at the top of the photo. From here our guide Yasemin leads us past the theatre which is currently closed to the public and undergoing a complete restoration. After Aspendos a visit would be anticlimactic in any event.

An on the ground feature of Perge that makes it very different from all other sites we have visited is that it has a huge well preserved stadium. You can see how large it is from the aerial photo. The actual dimensions are 234 metres (255 yards) by 54 metres(59 yards). Considering that an American football field is only 100 yards long or standard soccer pitch 125 metres long, this is a pretty big stadium. This is Yasemin explaining that it once held up to 20,000 spectators and aside from athletic events it once hosted gladiatorial contests. 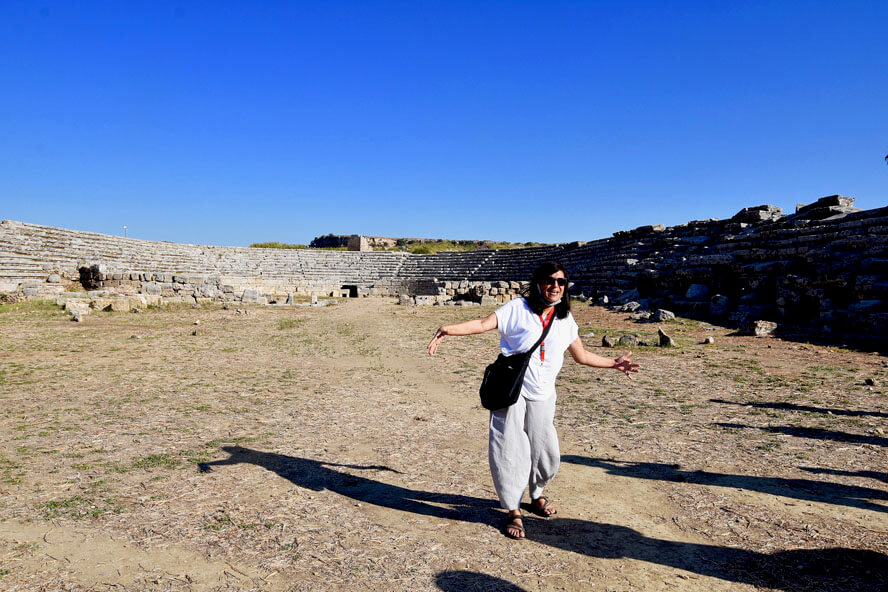 While theatres from the Roman Empire are quite common and the much larger amphitheatres less so at 230 known sites (including four still in use), I can find no source indicating how many ancient stadiums still exist. We visited the site of the Hippodrome in Istanbul, but there really is no trace of it left. The only other two stadiums I can recall visiting are the Circus Maximus in Rome and the stadium at Delphi which dates from the Greek and not the Roman period. Neither were in as good a condition as the one at Perge.

While all is quiet here today with our group being the only ones inside the stadium if I close my eyes I can almost hear the clanging of swords and the roar of the crowd as the Romans enjoyed the 'bread and circuses' promised to them as the price of fealty. How many men and wild animals died here will never be known, but we are standing on the very spot which once ran red with the blood of the victims.

The outside of the stadium has an interesting feature which you might have noticed on a visit to the Colosseum in Rome. These are the vaulted arches that are a necessary architectural part of the construction. In the case of Perge, one of three arches provided an entrance to the stadium while the other two were used as stalls by vendors. 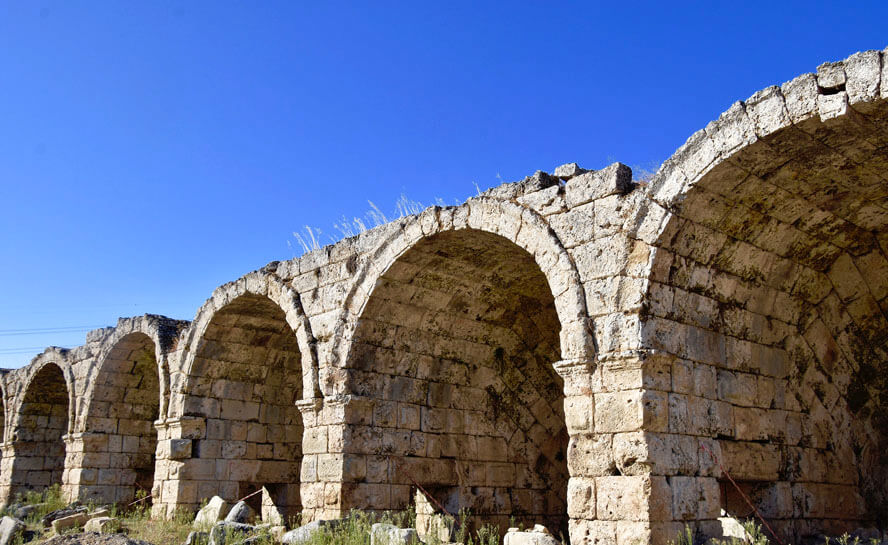 After passing the stadium we head for the actual entrance gate to Perge, but before getting there I notice what appears to be an impossible arch. What is holding up the two stones that appear to be defying gravity? 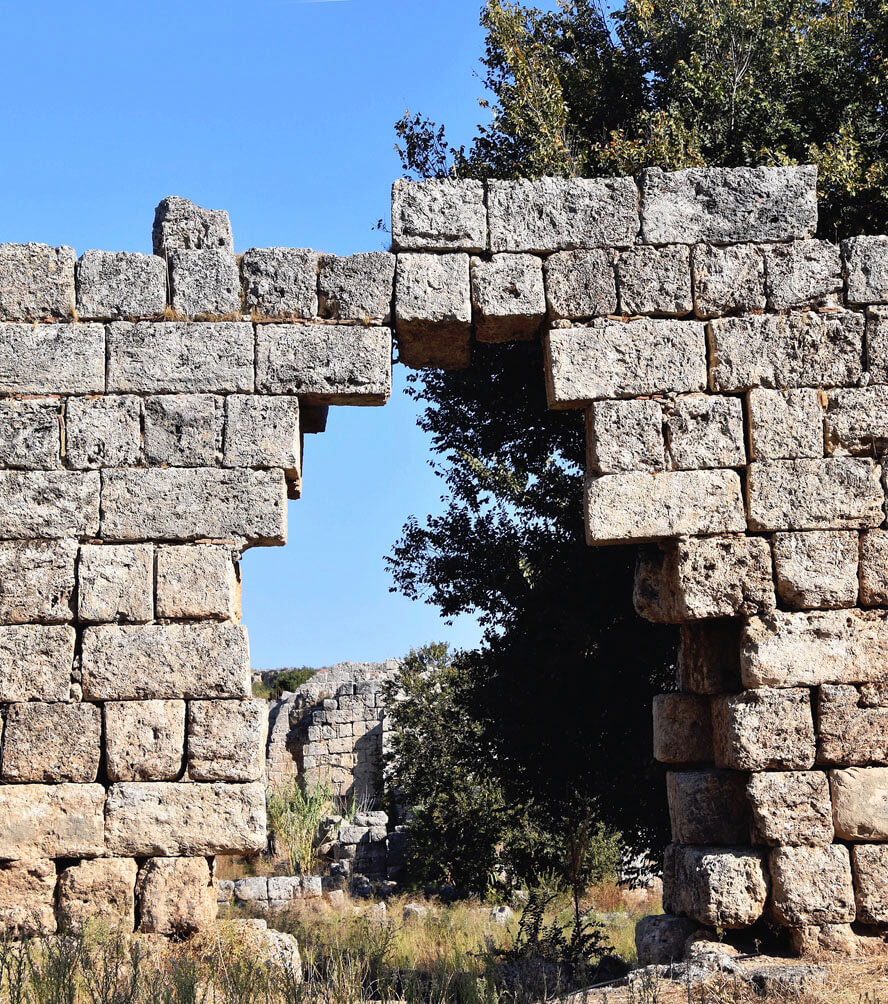 Unlike other sites we have visited, Perge has an actual standing entrance although you could hardly call it grand. 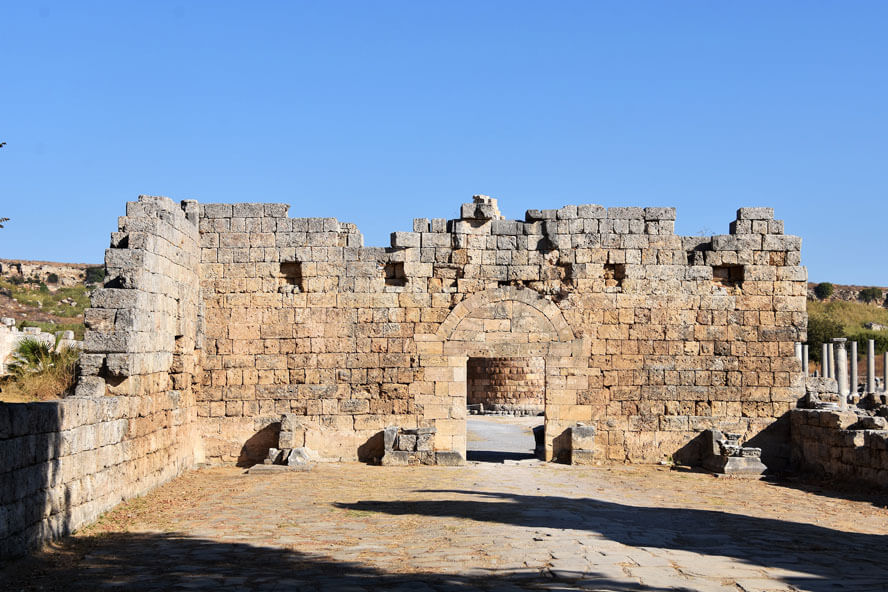 Approaching closer we get our first glance at some of the structures that make Perge unique. These are the two standing remnants of the entrance to the city during the Hellenistic period. Rather than remove them, the Romans left them standing and simply and expanded the city around them. Many in our group, including us, stop to get a photo which will help us identify exactly in what site we were, long after our memories have turned to mush. Hellenistic towers – must be Perge. 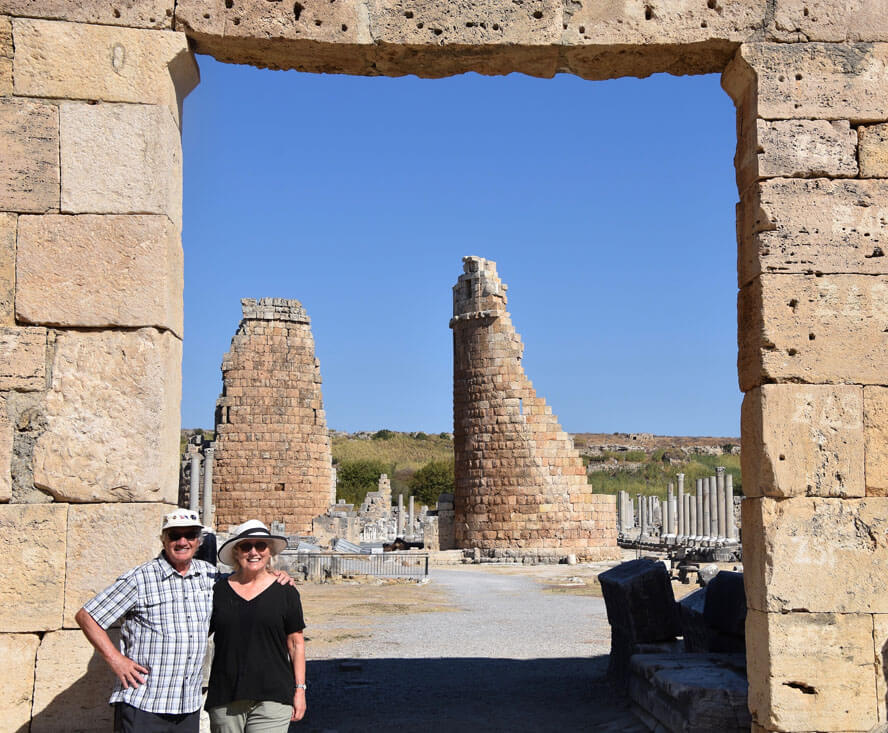 At the Entrance to Perge

Walking through the small entrance you are greeted with this closer look at the Hellenistic towers. 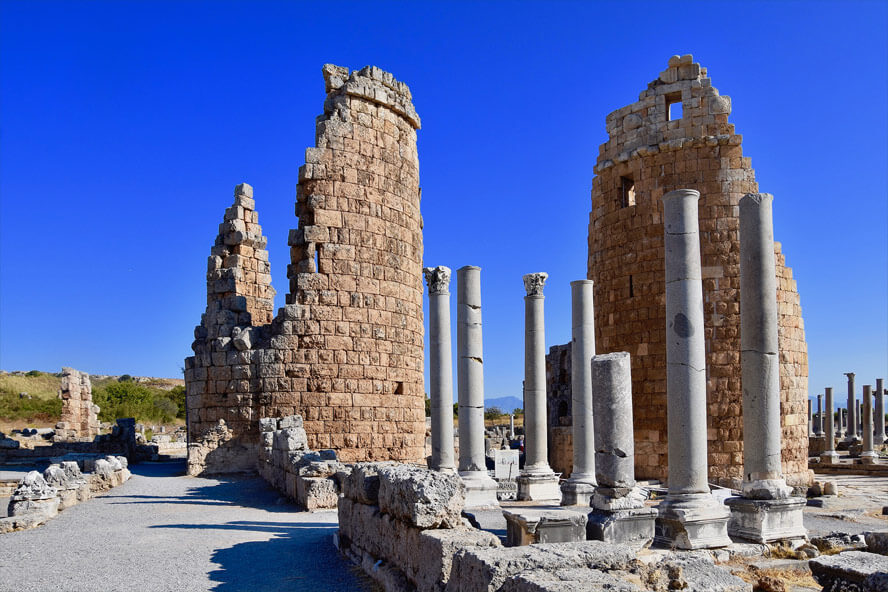 Gazing around you can see that there are literally hundreds of standing columns, more than we have seen even at Ephesus. This is the agora which is where Yasemin leads us first.

The agora is a large rectangular space which has a stoa on every side. These would have been covered and the place where the vendors would have their shops. 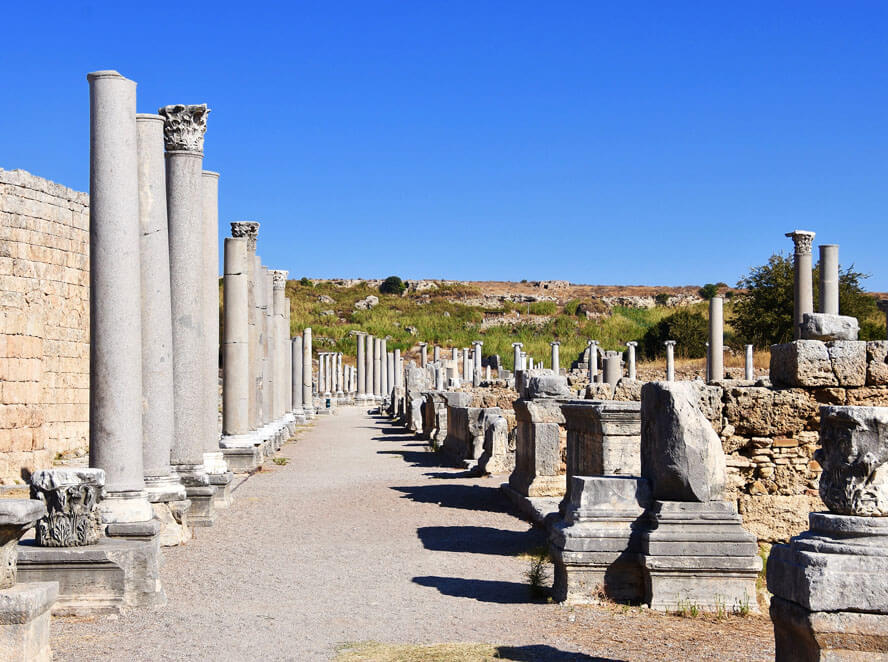 Until visiting Perge, I always assumed that the Greek and Roman agoras were similar to our modern markets where people selling their wares would set up on a regular basis, but without having an actual shop. This was dispelled when Yasemin pointed out the portals to what once were permanent establishments within the agora. 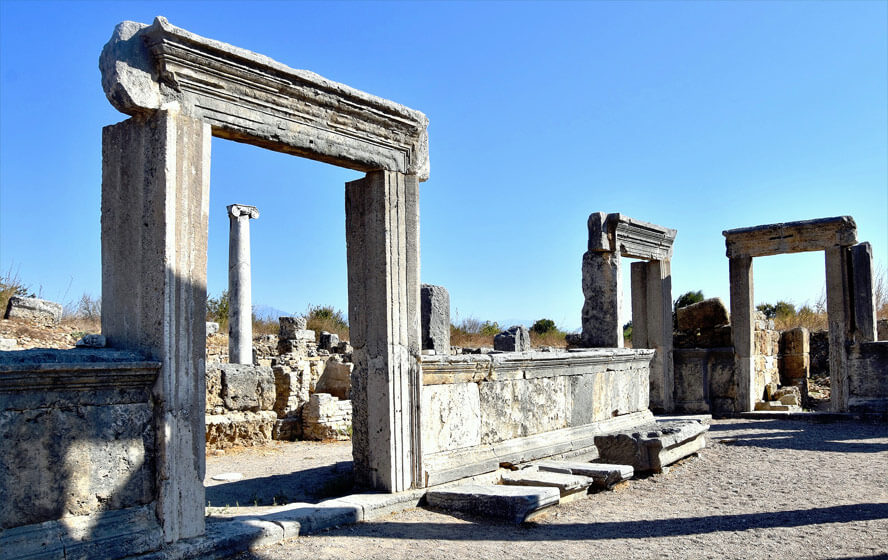 This was a storefront advertisement indicating that it was a butcher shop. 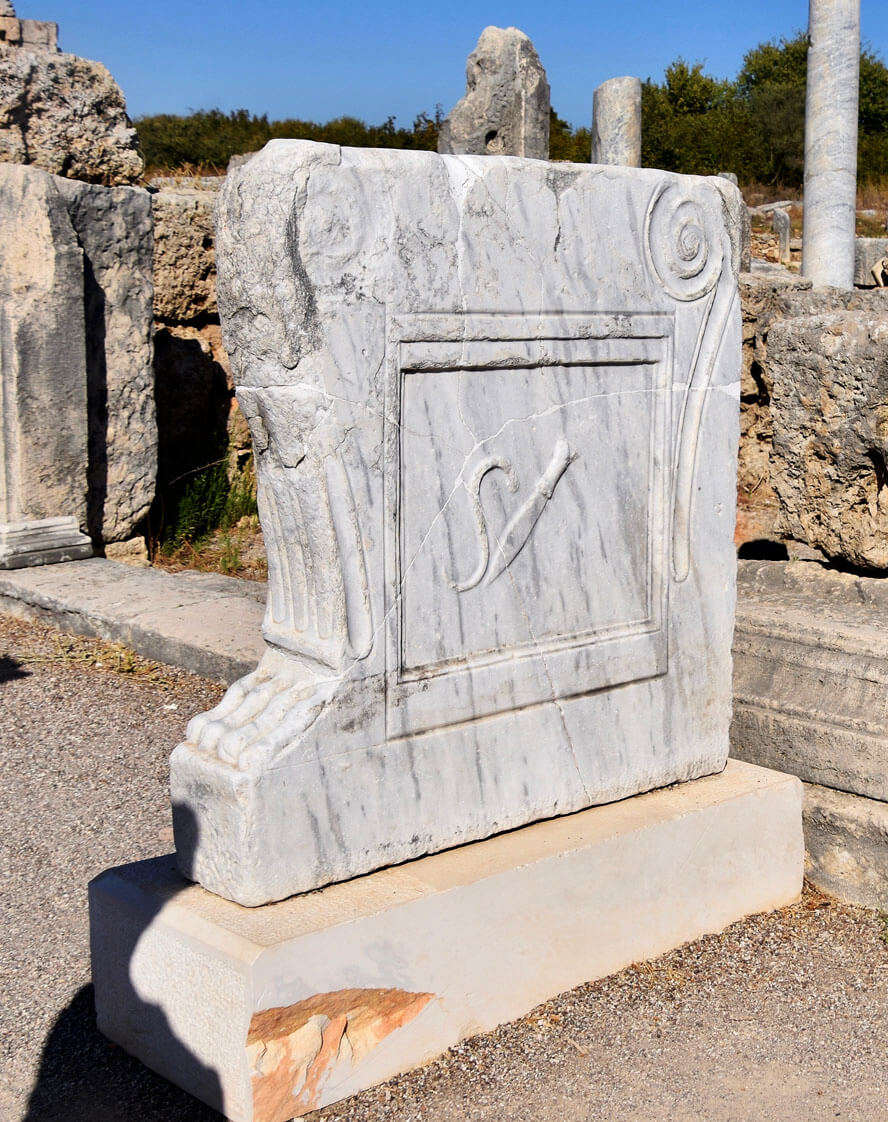 After exiting the agora we were free to explore Perge on our own. The city was laid out in typical Roman fashion in quadrants with streets that were easy to follow. This is the Cardo Maximus, the north/south street that at one time would have been lined with many of those beautiful statues we saw at the Antalya Archaeological Museum. 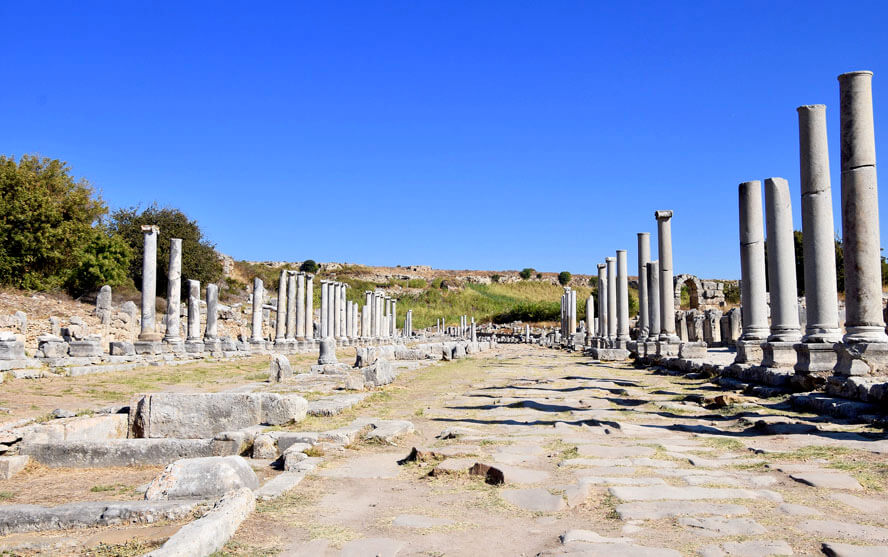 This is the group at the palaestra or outer entrance to one of the well preserved Roman baths that Perge is noted for. 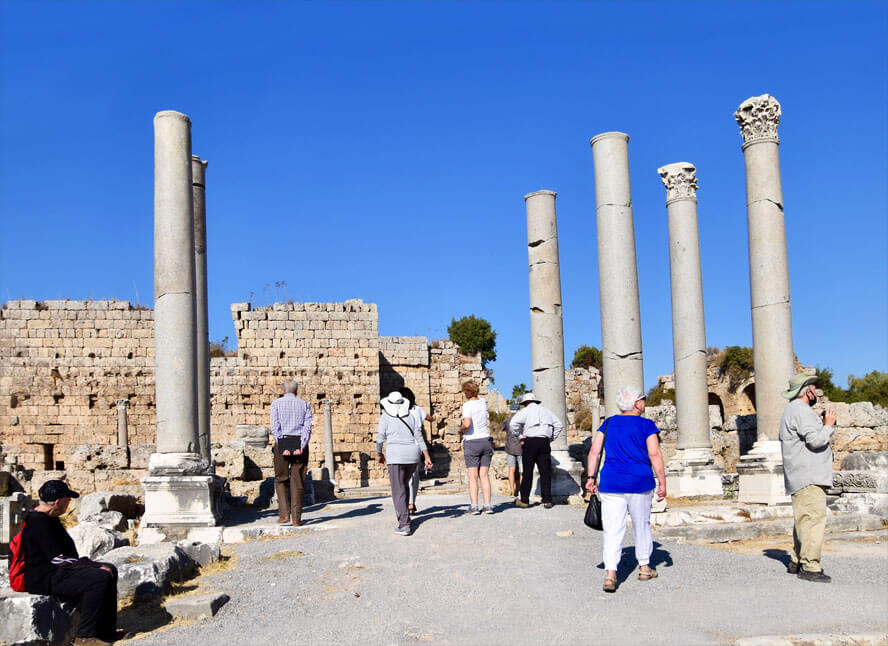 In Front of the Paleastra of a Roman Bath

The Southern Bath is the best preserved and the various rooms that were always found in every bath are readily apparent. Most baths also had a gymnasium for working up a sweat before entering the waters and the one at the southern Perge bath was quite large. Here men would wrestle, box or engage in other manly arts before taking the waters. 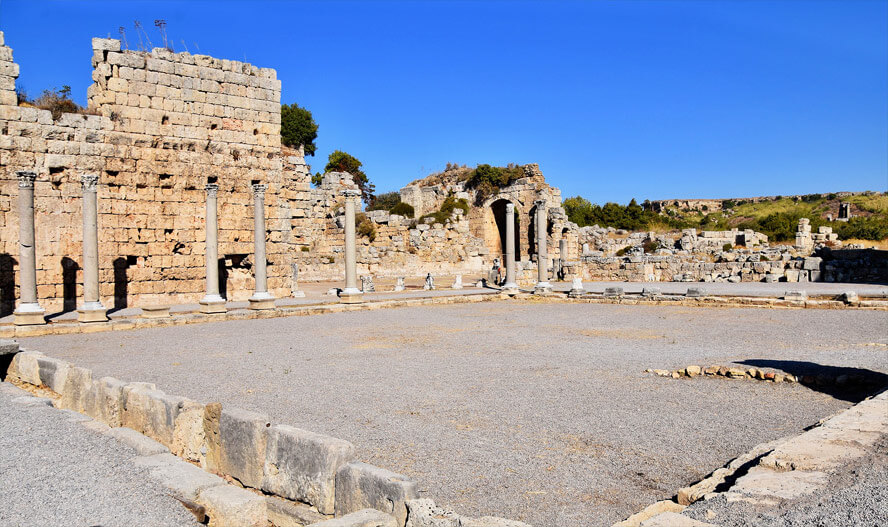 This is the tepidarium which not surprisingly had water that was neither too hot or too cold – sort of the Goldilocks spot in the bath and the usual starting and ending point for the bather. 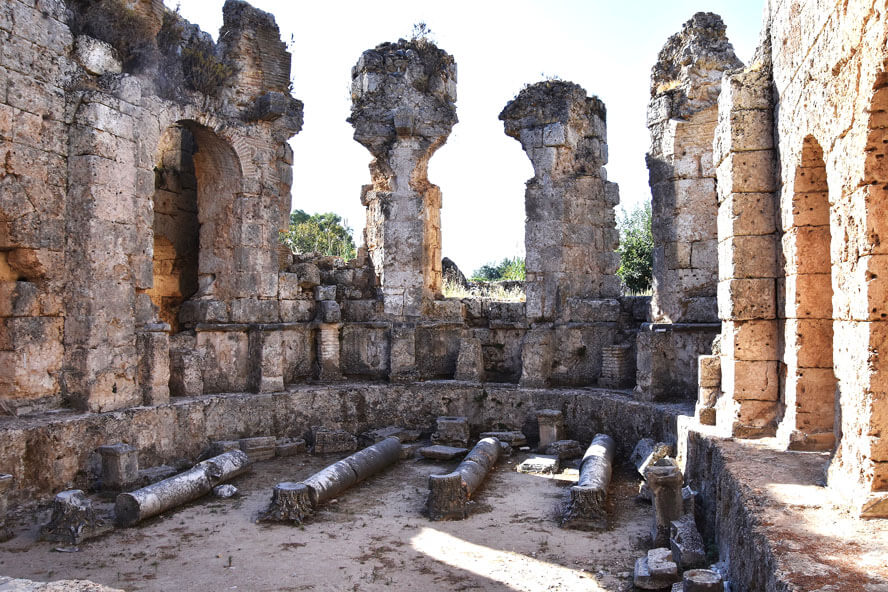 Next for a hot bath, you went to the caldarium. The earliest baths were situated over natural hot springs, but by Roman times the demand for baths was so great that they had to find a way to build and heat them in any city whether there were hot springs or not. Here you can clearly see that the floor of the bath was raised well above the lower floor or hypocaust within which wood-burning furnaces would be used to heat the water. 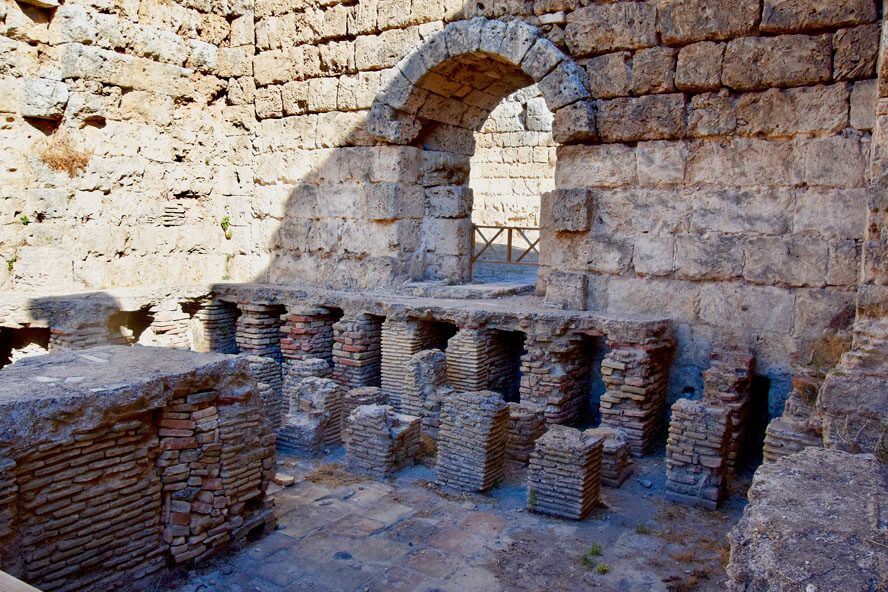 On the cold side, you had the aptly named frigidarium which would cool down the overheated bather. After freezing your balls off here, you would return to the tepidarium for a rub down and massage. Today we pay a fortune to go to a day spa and have an experience like this, but in Roman times the fees were minimal and open to every citizen. 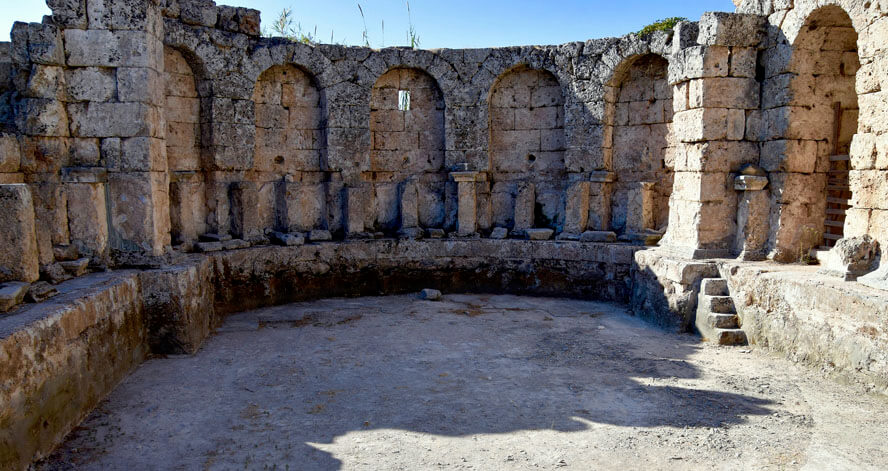 While inside one of the rooms at the bath I couldn't help but notice this contrast between Roman and modern times as the plane flew over Perge on its way to the airport at Antalya. 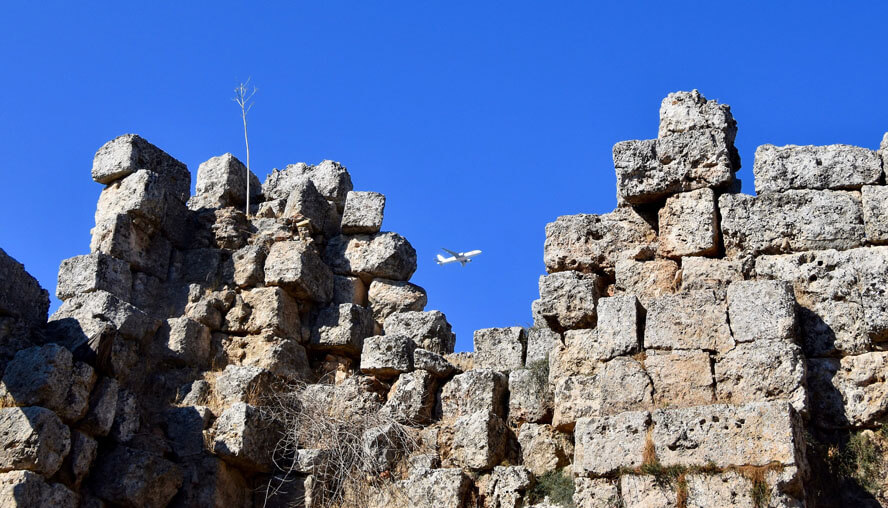 The Cardo Maximus passes by the Nymphaeum of Septimus Severus, one of many in the city. Nymphaeum is a glorified word for a very fancy fountain. 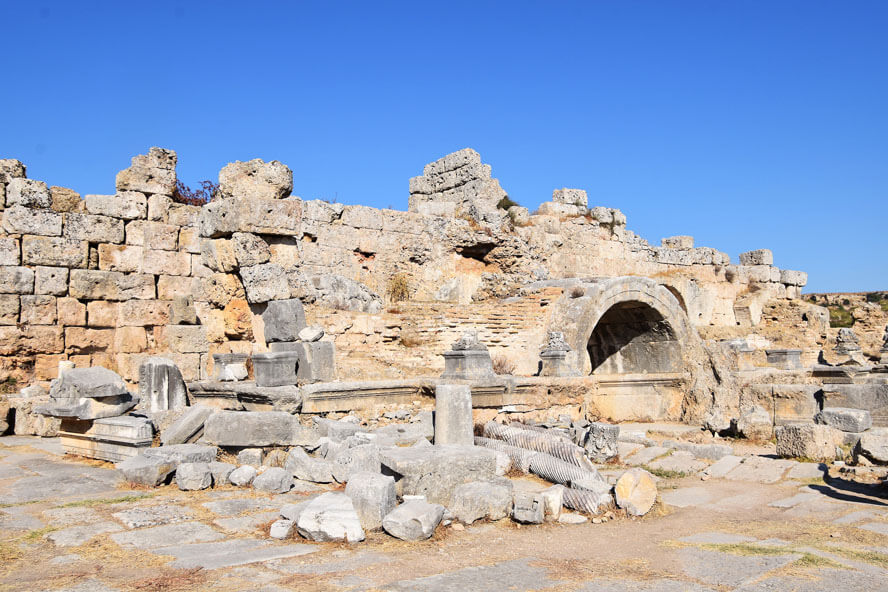 While it doesn't look like much today, it was adorned with many fine statues including the one of emperor Septimus Severus which we saw earlier in the Antalya Archaeological Museum. 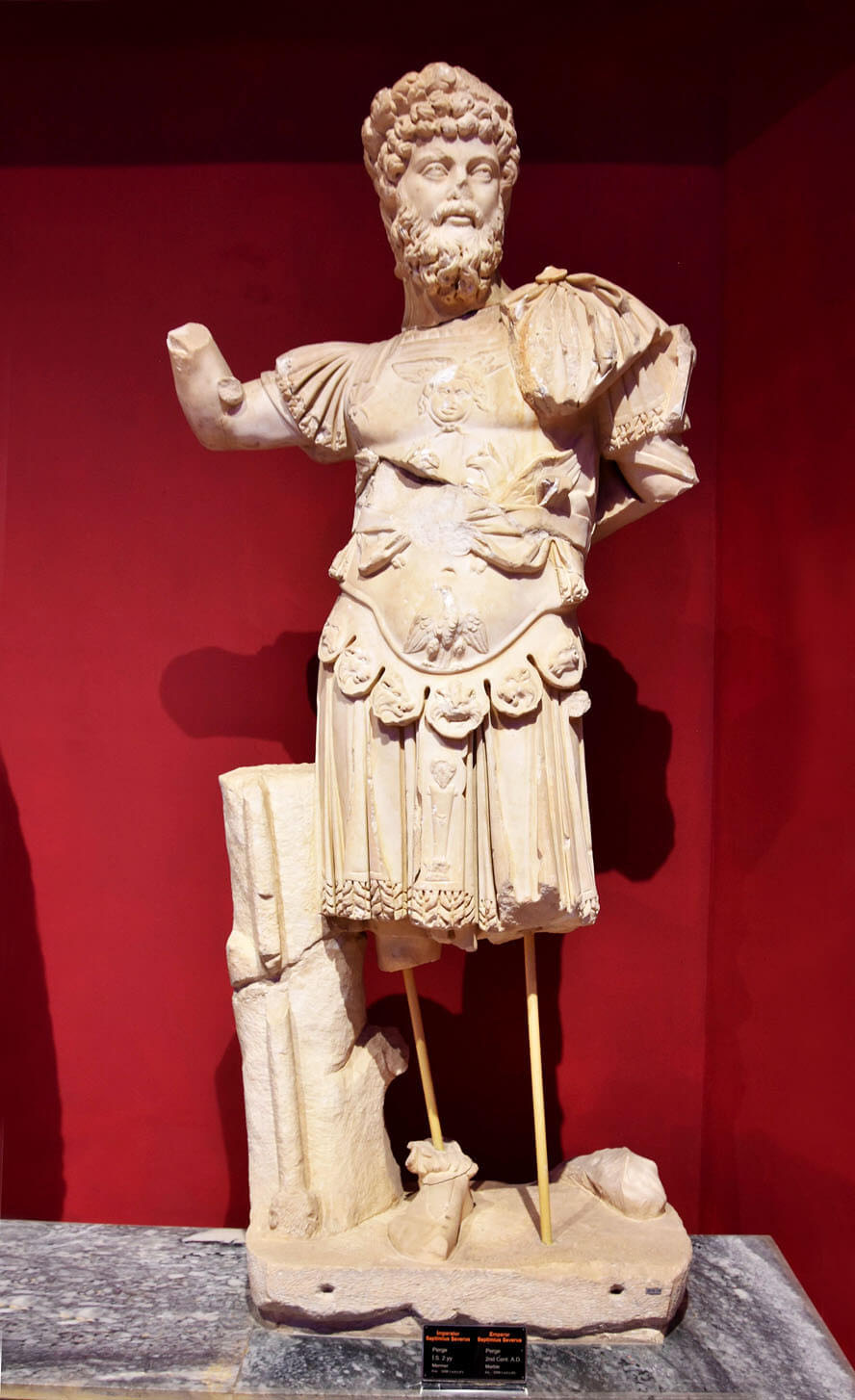 The Cardo Maximus ends at the most famous monument in Perge, the Nymphaeum of Kestros. The reclining statue you see in the photo is of the river god Kestros and it marks the first spot where fresh spring water flowed into the city, courtesy of Kestros. 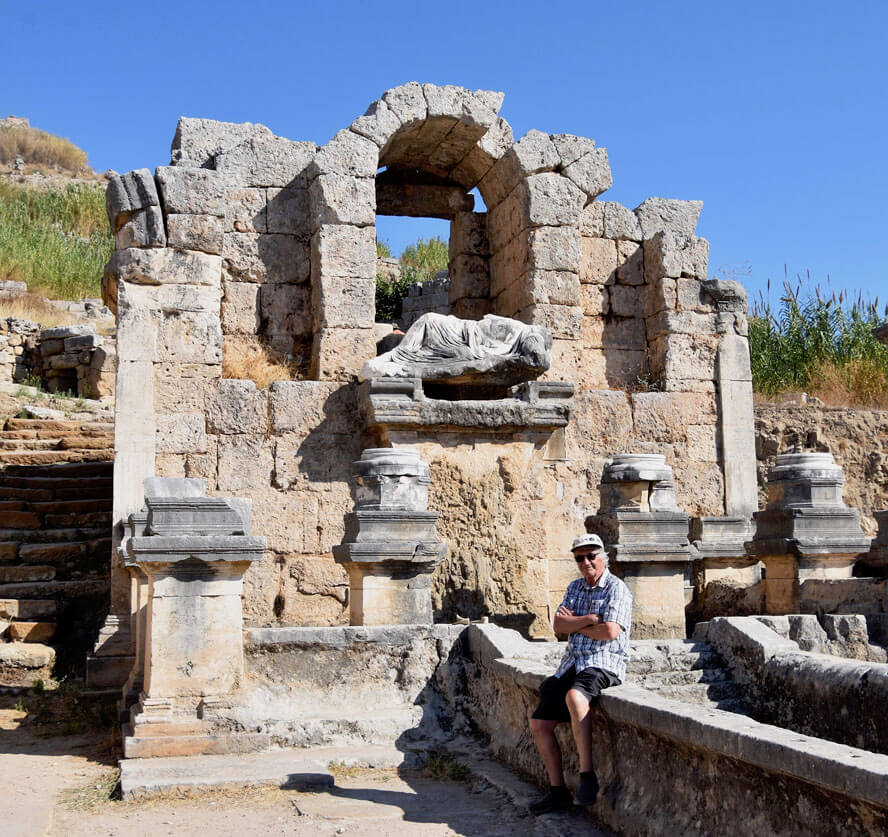 From this end point it was time to return to the bus, but not stopping to have a look down the intersection of the Cardo Maximus and the east/west street. This is a view down what is simply called Western Street with its perfectly aligned marble columns. 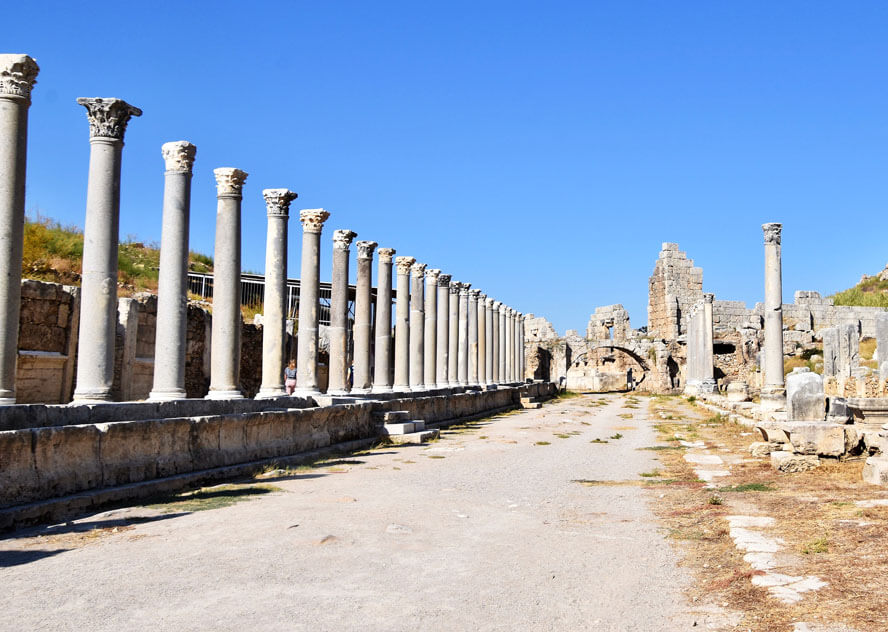 Our next stop will be the final one at an ancient Greco/Roman archaeological site on this tour, the seaside town of Side where the ruins are incorporated right into the modern infrastructure. It should be very interesting and I hope you'll join us there.