In his latest blog post, Dale Dunlop, The Maritime Explorer, takes in one of Turkey's important archaeological sites, Aspendos - The World’s Greatest Ancient Theatre. If you are interested in what Adventures Abroad has to offer, please check out our Small Group Tours.

During our second day in the great city of Antalya, we used it as the base from which to explore two of Turkey's most important archaeological sites, Aspendos and Perge. In this short post, our Adventures Abroad tour of western Turkey will visit the best preserved theatre in the ancient world. We'll also get a look at a portion of a Roman aqueduct that has a unique inverted siphon which I'll do my best to explain to you. Please join us as our tour leader Yasemin Reis shows us the marvels of Aspendos.

The city of Aspendos has very ancient roots, going back at least as far as the 5th century BCE by which time it was a firmly established Greek colony, perhaps settled by people from Argos on the Peloponnese. At that time it was the chief city in Pamphylia until the usual chain of events that by now we almost should be able to rhyme off in our sleep began to unfold. The Persians took over in 546 BCE, Cimon liberated the city in 465 BCE and it joined the Delian League. The Persians were back in control by 411 BCE. In 388 BCE an event occurred that does set Aspendos apart from all the other Greek colonies along the Mediterranean coast. This was the killing of the great Athenian general and fleet commander Thrasybulus in his tent by enraged Aspendos' citizens after he unwisely ravaged their crops while trying to reestablish the hegemony that Athens once held over the Greek colonies. I won't go into any detail about Thrasybulus' career other than to say he was a renowned champion of democracy for decades and a truly interesting historical figure. For him to die in such an ignominious manner was not a fitting end to what had been an outstanding military and political career.

OK back to the usual story. In 333 BCE Alexander the Great ended Persian domination in Anatolia once and for all. In 190 BCE the Romans took over and Aspendos enjoyed a long period of prosperity under Pax Romana until it gradually faded away under Byzantine rule and by the Middle Ages was pretty well abandoned.

However, while the city crumbled to dusty ruins, one great edifice withstood the corrosive effects of time and that was the magnificent theatre, the best preserved in the ancient world.

It was built under the rule of the great emperor Marcus Aurelius in the 2nd century by an architect named Zenon and built so well that the Seljuk Turks used it as first a caravansary and then a palace. Today it is the host of the annual International Opera and Ballet Festival which attracts some of the best opera singers and ballet performers in the world.

Aspendos is only 49 km. (30 miles) from Antalya, but with much of it through the outskirts of the city it takes us almost an hour to get there. Once again as we have seen constantly on this trip, the parking lot is virtually empty. We will have the greatest theatre in the ancient world pretty well to ourselves. 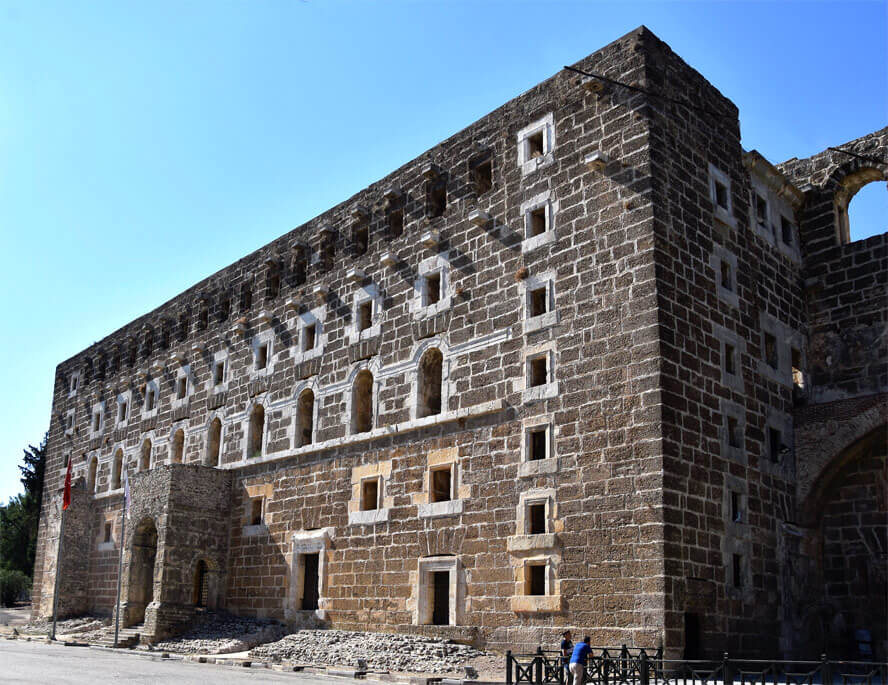 Exterior of the Theatre

Here's the first thing that makes Aspendos so different than the theatres we have seen in Ephesus, Pergamon and Myra. Its exterior entrance is still fully intact. This is the part that was used as both a caravansary and a palace. I have seen a lot of ancient theatres, but I have never seen one like this.

Passing through the entrance you come upon this sight and trust me, it's a 'just WOW' moment. Actually, I fibbed a bit, because you have to climb up to get this view. That's the rest of our group along with Yasemin down below. 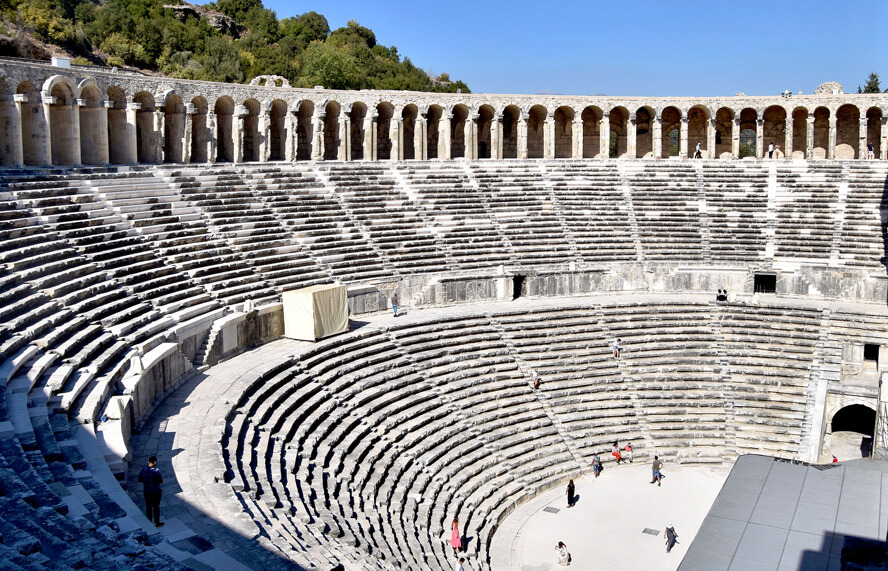 Our Group at Aspendos

A few more of the group make the climb up the steep stairs in this place that will hold up to 20,000 spectators 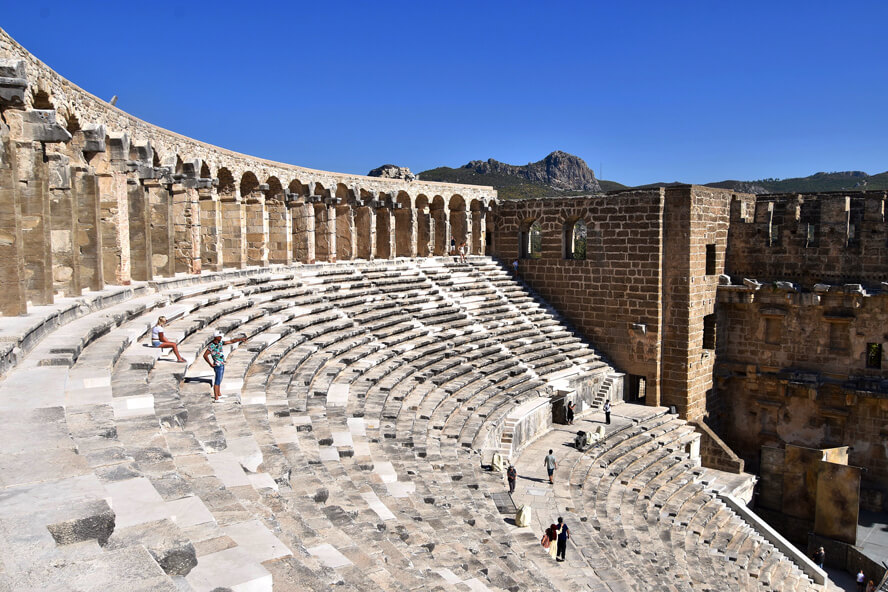 Side View of the Theatre of Aspendos

At the very top is a barrel vaulted colonnade that produces interesting shadows between the columns. 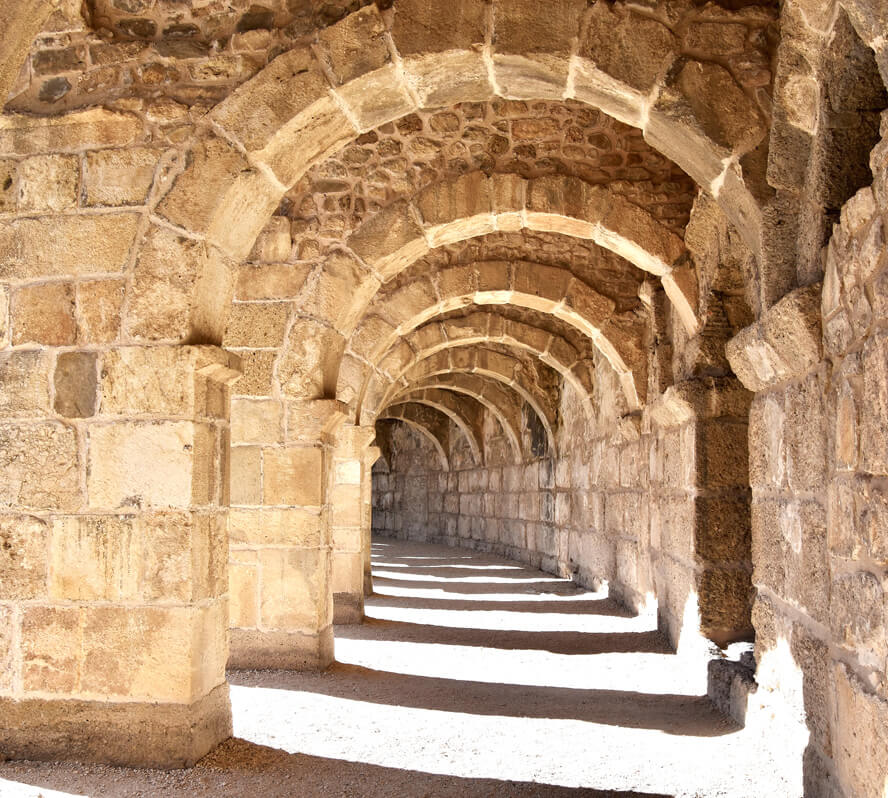 This is the view looking down from the very top to the stage below. Once again I have to marvel at the genius of the architect who could build a structure of this size and yet get the acoustics so right that even from this distance you can plainly hear the performers on stage. I know this because Yasemin demonstrated it. 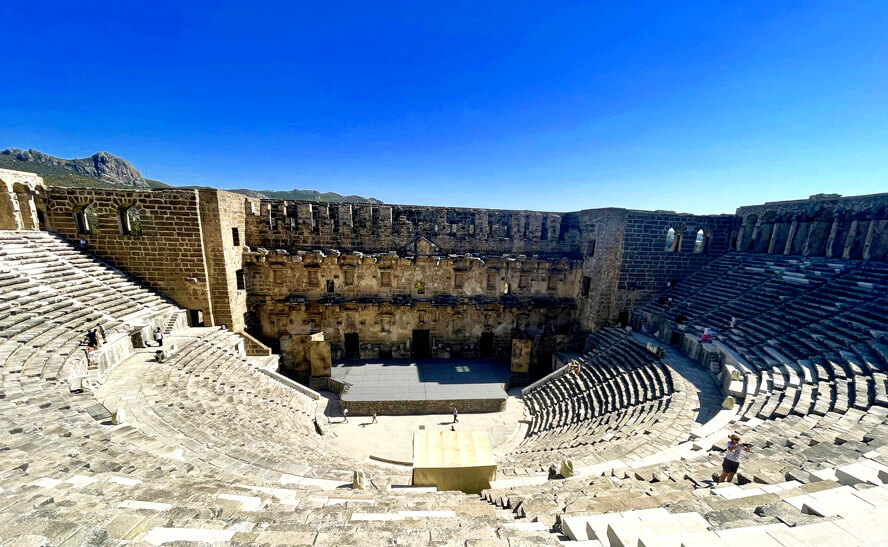 Deciding to head down to the stage I look around for Alison who is nowhere in sight; that is until I see her peering out from behind one of the columns. 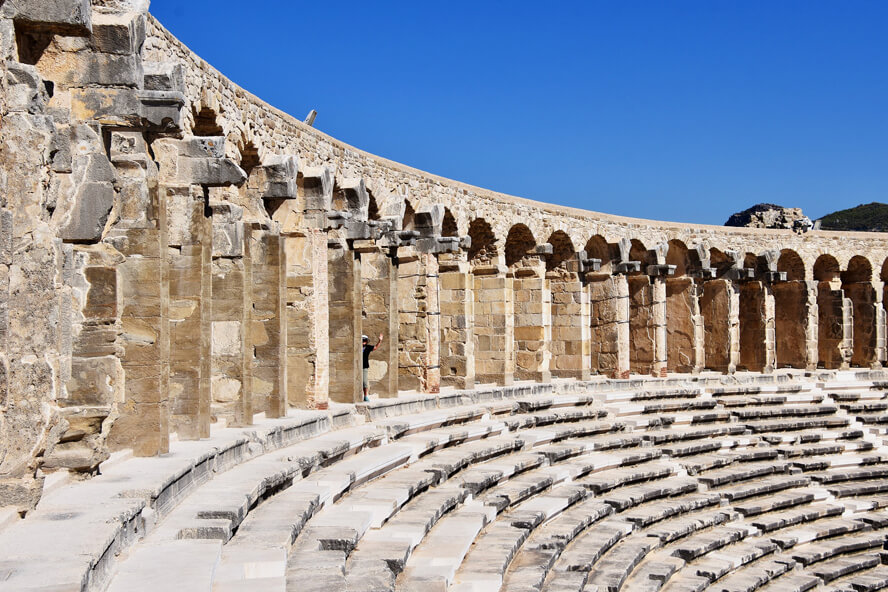 You may recall that in the last post we saw a statue of the goddess Tykhe in the Antalya Archaeological Museum. I commented that as the goddess of fortune she was often placed in prominent positions in buildings of importance. Well, here she is on a pediment over the stage of the Theatre of Aspendos. Obviously, she did her job because this place has stood for over 1,800 years. Well done Tykhe. 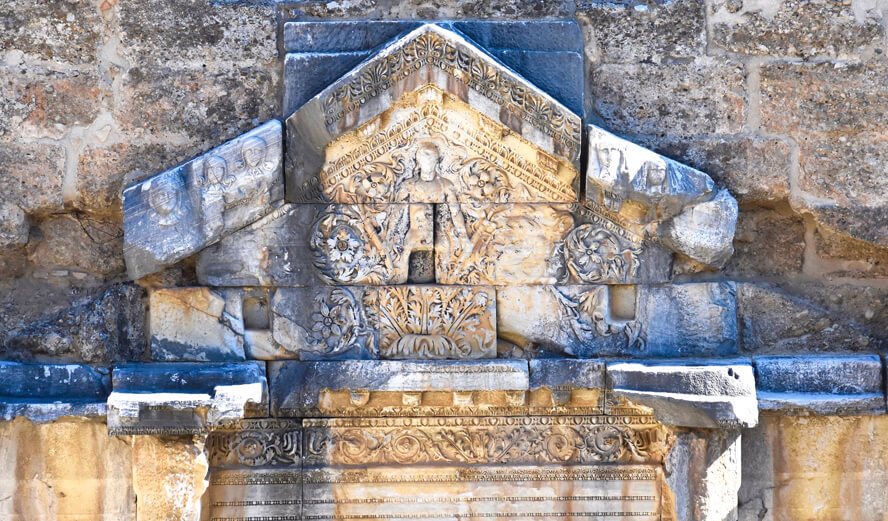 Tyche at the Theatre Pediment

Nobody did aqueducts better than the Romans. In fact, one of them Acqua Vergine still supplies water to Rome's fountains including the Trevi some 2,040 years after it was built. The actual Roman city of Aspendos had a population estimated at about 20,000 at its peak and was spread out around an acropolis which lies above the famous theatre we just visited. There is virtually nothing left of it today, but in the mid-third century, a newly constructed aqueduct brought spring water from two sources 19 km. (12 miles) away directly into the city's fountains and baths. The records of who built and paid for it are scanty by Roman standards, but most likely it was, like many Roman infrastructure projects, the gift of a private citizen.

One of the problems with building aqueducts is that in some places the level of the land will be lower than the final destination. In the case of Aspendos that was the acropolis. It is considerably higher than the valley floor over which the portion of the aqueduct in the photo above passed. So how do you get water to flow uphill? Sound impossible? Not if you remember your high school physics and the principle of the siphon which through a process that scientists still are not in 100% agreement as to why it works, will allow water to flow uphill through a hose or other cylindrical device. I won't reveal how I came to know how to use a siphon, but let's just say it left a bad taste in my mouth.

So have a look at this, at first sight, a not too unusual pile of bricks and mortar. What you are actually seeing is one of the three world famous inverted siphons of the Aspendos aqueduct which we do now know caused the water to flow uphill. 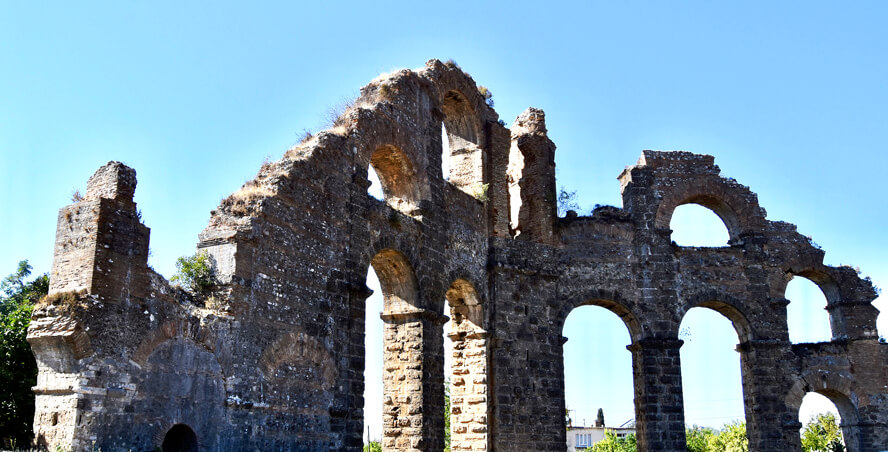 The Inverted Siphon of Aspendos

How the Romans figured this out and just how it worked in this aqueduct are still matters of debate, but no one now doubts that it did work. 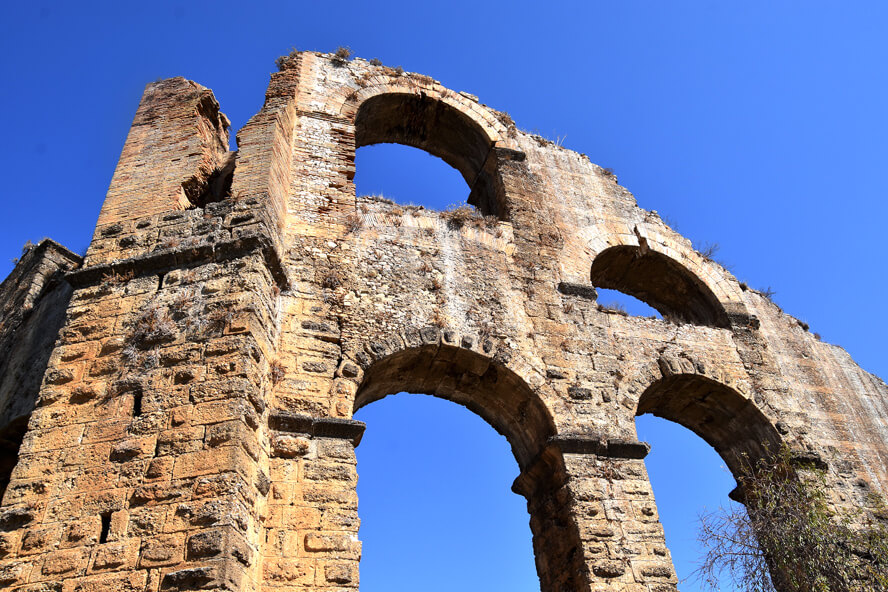 Looking Up at the Inverted Siphon

The more I travel throughout the Roman world, the more I marvel at their engineering abilities and the Aspendos aqueduct is yet another example of their unequalled skills in ancient times.

Both the theatre and the aqueduct are on the UNESCO World Heritage Sites Tentative List and by the time you visit they may well be designated.

We will spend the rest of this day exploring the city of Perge which is a much larger site than Aspendos. I hope you'll join us there.