The Turquoise Coast by Boat

In his latest blog post, Dale Dunlop, The Maritime Explorer, takes in The Turquoise Coast by Boat. If you are interested in dates and prices for this trip please check out our Small Group Tours to Turkey.

In the previous post, we arrived in the small town of Kas having stopped at Fethiye along the way to view the Lycian rock tombs.  A few years ago Alison and I and some friends embarked upon a week-long Blue Cruise that took us along the Turquoise Coast of Turkey to some of the most beautiful places on Earth. It was one of the most idyllic and memorable weeks of my life. Today Alison and I are going to get a chance to relive some of these memories as we embark on a boat cruise with the rest of our group as we continue our exploration of western Turkey with Adventures Abroad. We will visit some of the most popular places on the Blue Cruise route. Please come aboard.

This is our boat which is manned by a husband and wife team who have been taking tourists out to see the wonders of the Turquoise Coast for many years. It has a canopy for sun protection and cushioned places to sit fore and aft. 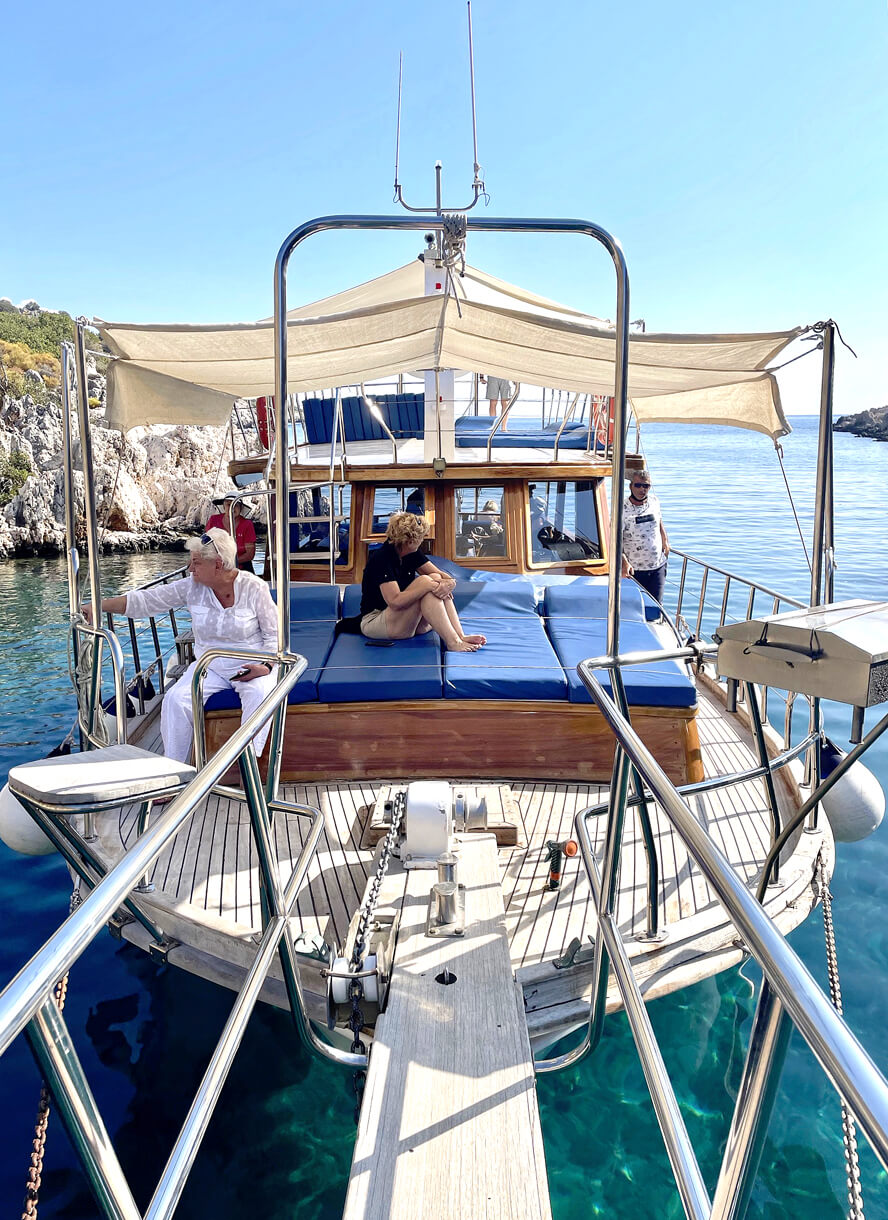 It's a beautiful day for sailing and soon we round the lighthouse at the entrance to Kas harbour and we are afloat on the Turquoise Coast. 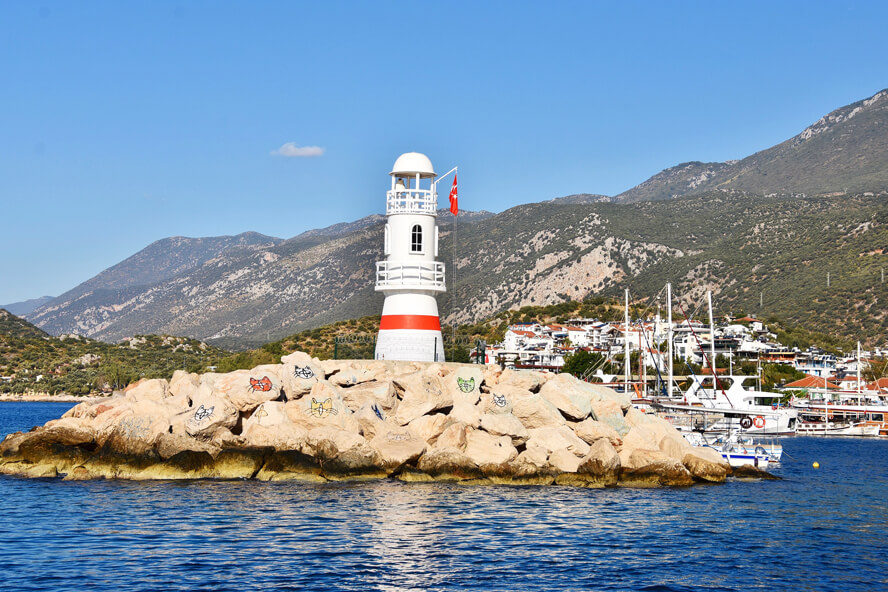 One of the first things we see as we head away from Kas is the Greek island of Kastellorizo which is both an anomaly and an irritant to the Turks. It lies barely 2 kms. (a bit more than a mile) off the Turquoise Coast, but 125 kms. (78 miles) from the next closest Greek island of Rhodes. As a Greek island it permits Greece to claim a large portion of the surrounding  Mediterranean and anything that's in or under it, effectively blocking off Turkey's claims even though it has a much larger land mass. We have the same issue with St. Pierre and Miquelon in Canada where these tiny islands off the south coast of Newfoundland allow France to claim an outsized portion of the fishing and mineral rights in the Gulf of St. Lawrence.

On a less controversial note, Kastellorizo was the setting for the Oscar winning film Mediterraneo which tells the story of Italian soldiers posted on the island during WWII who become stranded and eventually become as much part of the community as the Greeks. It's a heart warming film that I highly recommend.

Looking back toward the mainland we get a good view of Kas. 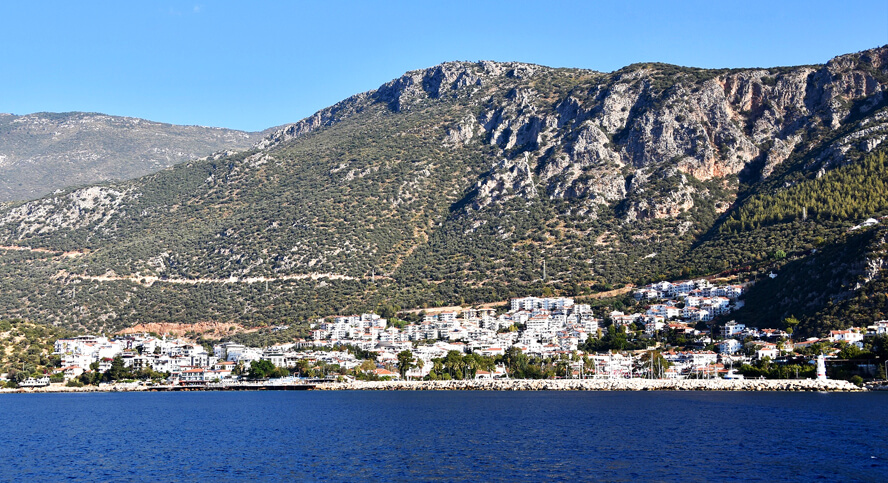 It's not long before we come to our first stop in a small cove for a chance to swim in waters that make make it apparent why this is called the Turquoise Coast. 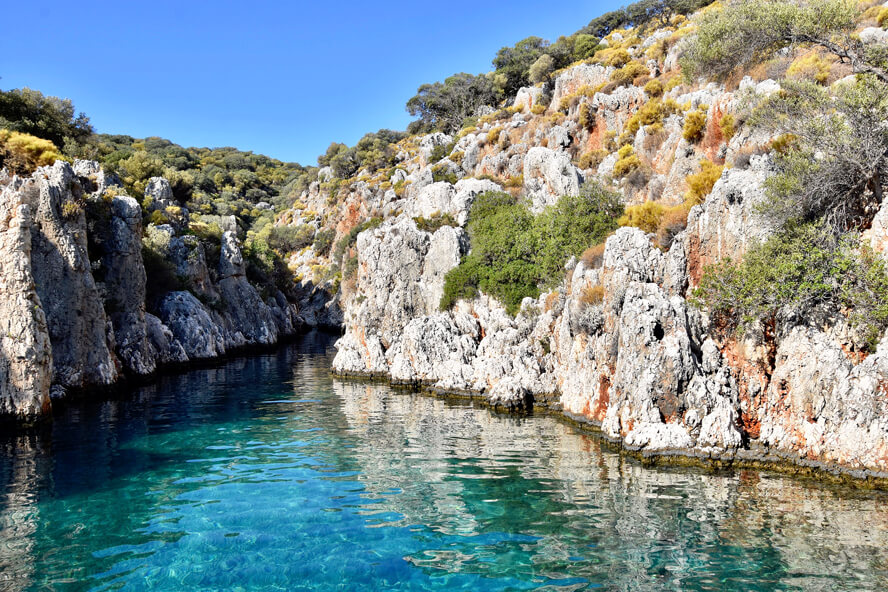 Several of our gang take advantage of this stop to take a dip, but I'm not quite ready yet – maybe at the next stop. For now I'm enjoying just chilling out on the Turquoise Coast.

Just Chilling on the Turquoise Coast

Weighing anchor we round several small peninsulas heading for the island of Kekova. Along the way we pass several lone fishermen out in small boats and using hand lines to catch the fish that they will sell to local restaurants. Some of us might eat tonight what this fellow is catching this morning.

Rounding one more cape we get our first look at the town of Kalekoy aka the Lycian settlement of Simena with its walled citadel to which we shall return later. 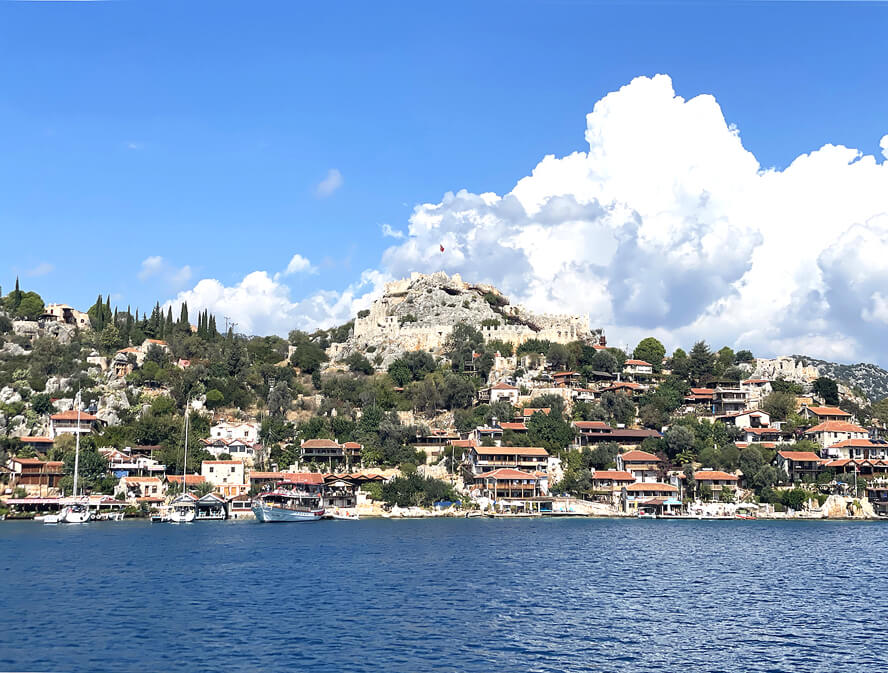 For now, our immediate destination is the uninhabited island of Kekova which once was home to a number of thriving settlements on the Turquoise Coast. These were eventually all destroyed by either earthquakes or laterally, Muslim invaders. Today Kekova is famous for the sunken cities that dot its many coves. 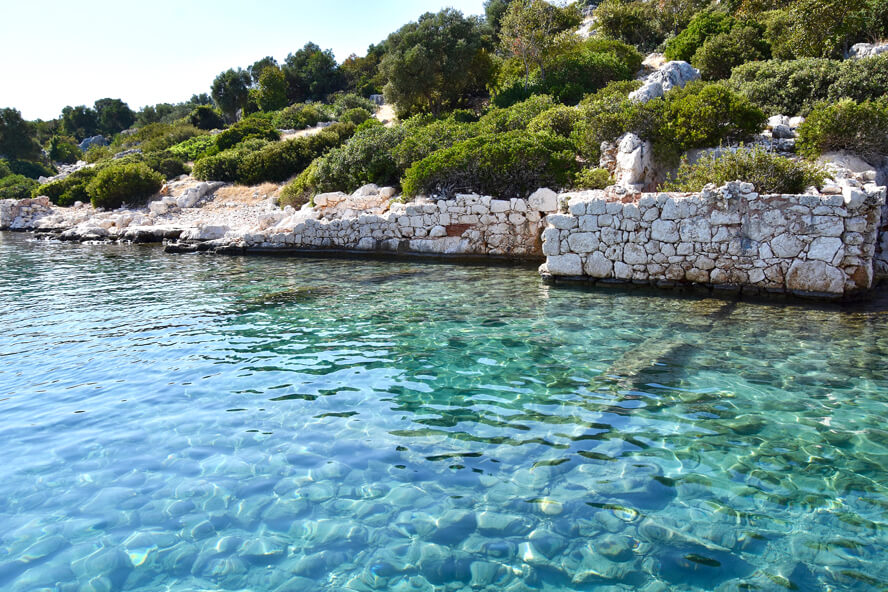 We pull into the very spot where our gulet stopped on our Blue Cruise to have another chance to swim and check out the underwater ruins. While that is happening lunch is being prepared. 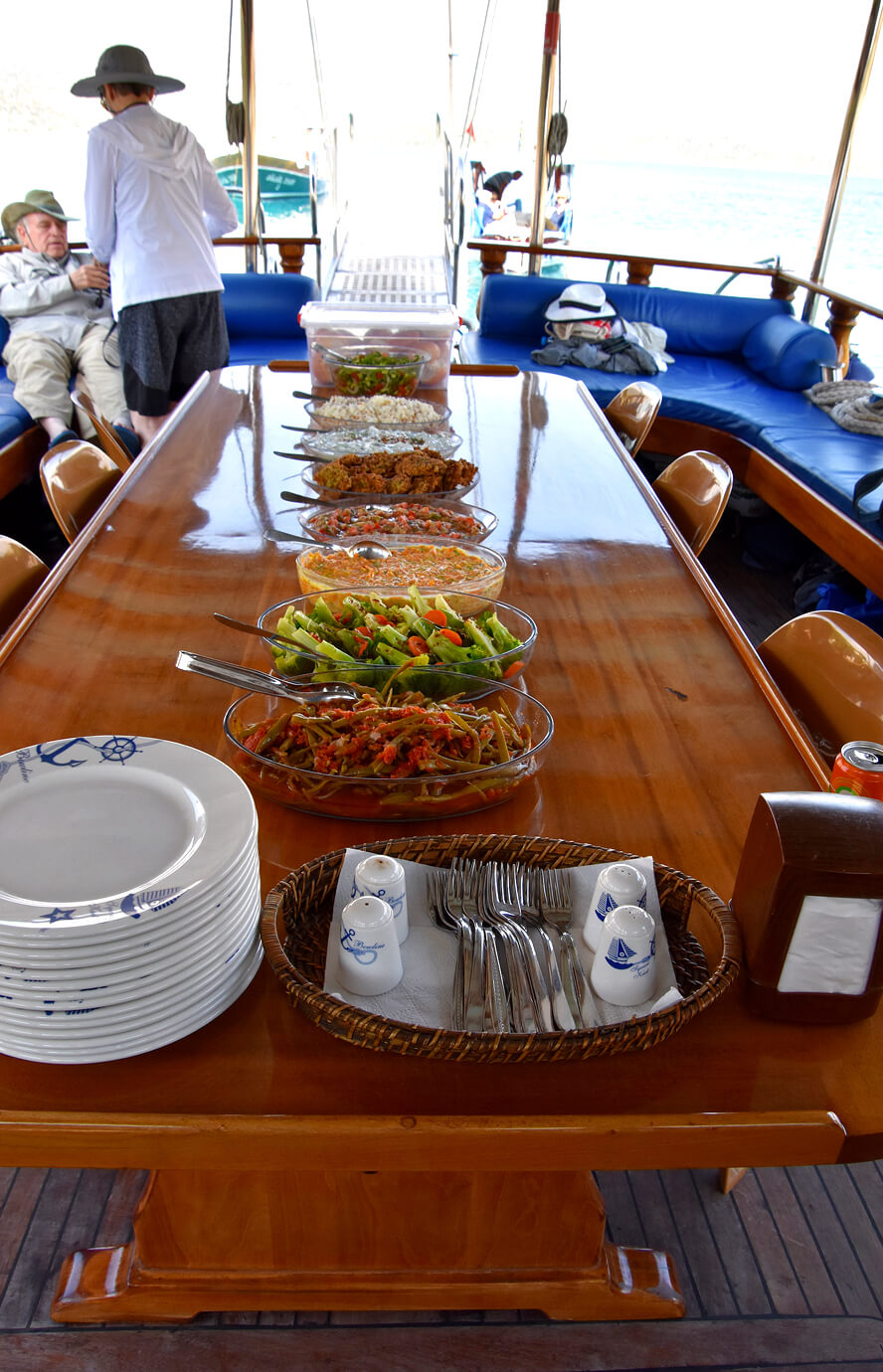 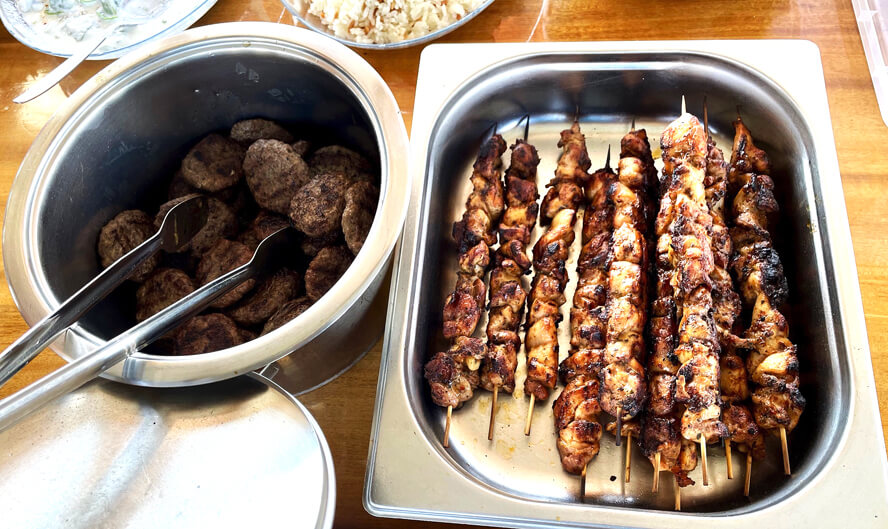 Passing up another chance to swim, we now head for Kalekoy where we tie up and our AA guide Yasemin leads us on a narrow path leading up to the citadel, which is actually a crusader castle. It's hot and sweaty work, but worth the effort. 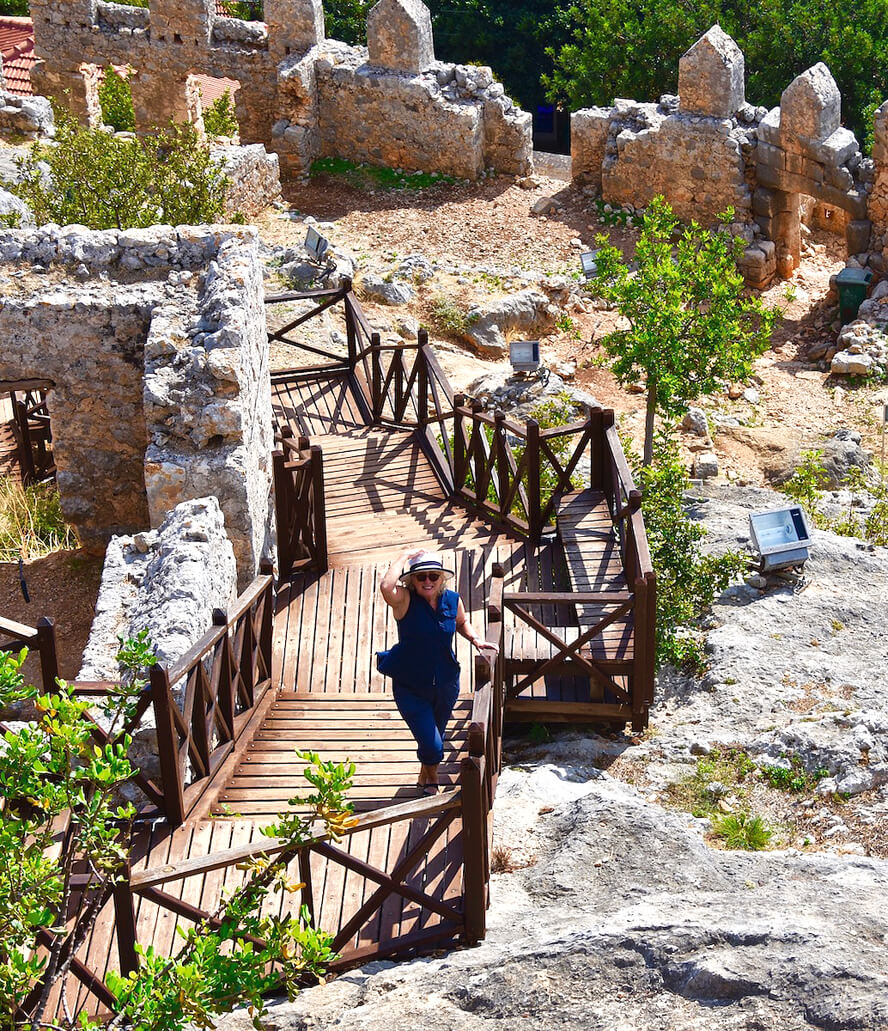 Near the top, we pass the ruins of a very ancient Lycian theatre carved out of the bare rock. 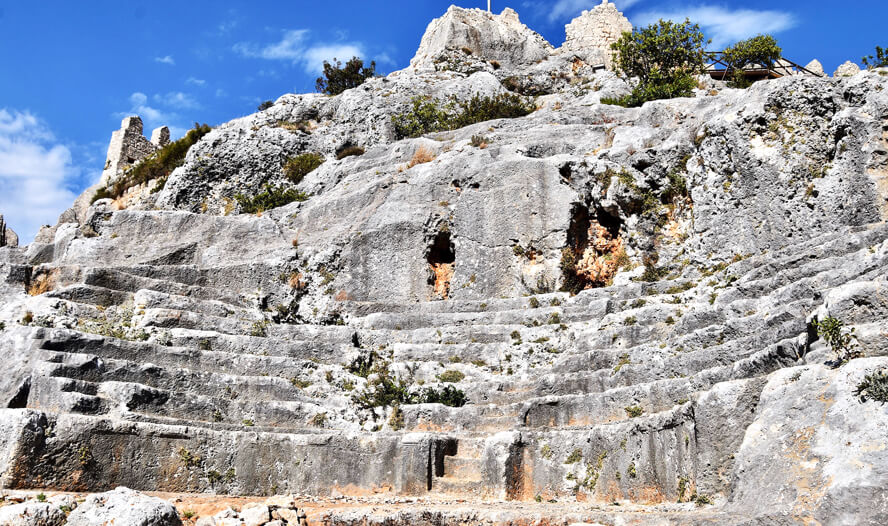 Reaching the citadel I can see the remnants of many Lycian tombs strewn somewhat haphazardly along the crest of the summit. One has lost its top, but still, this is a pretty amazing sight. 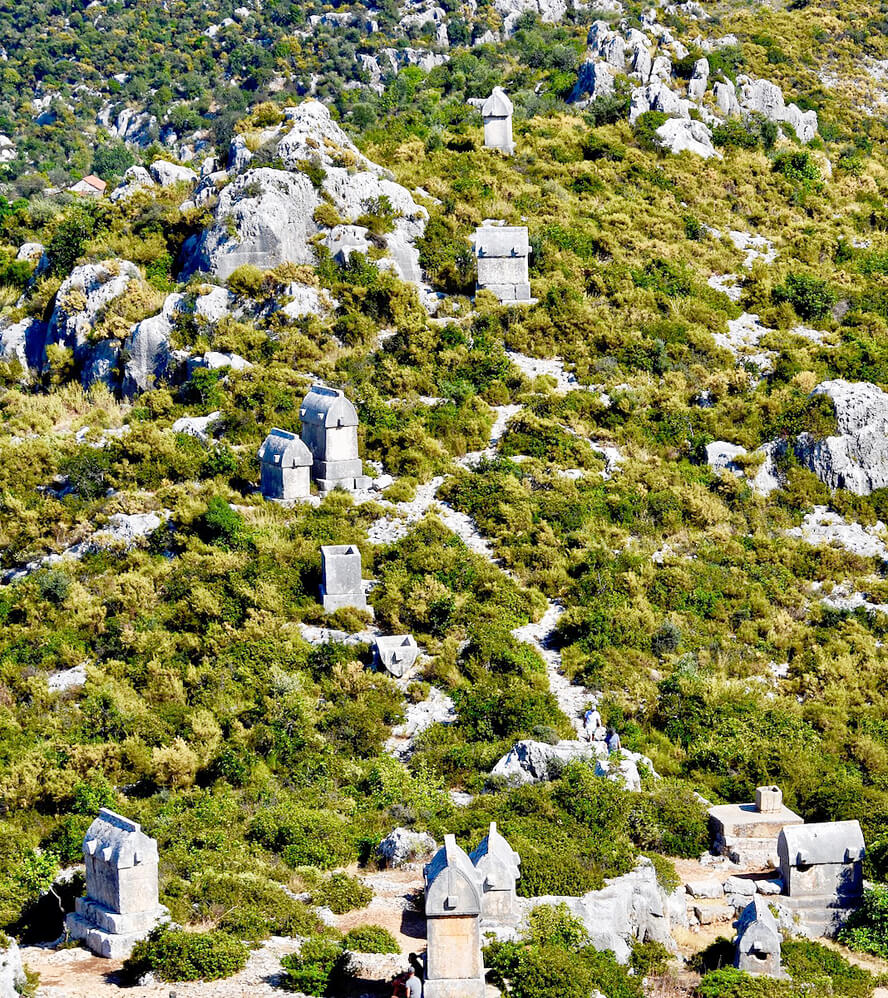 Lycian Tombs near the Citadel of Simena

Even more amazing is the view of Kalekoy and the Turquoise Coast from the castle walls. This gives you an idea that the climb up to the citadel of Simena is serious business. 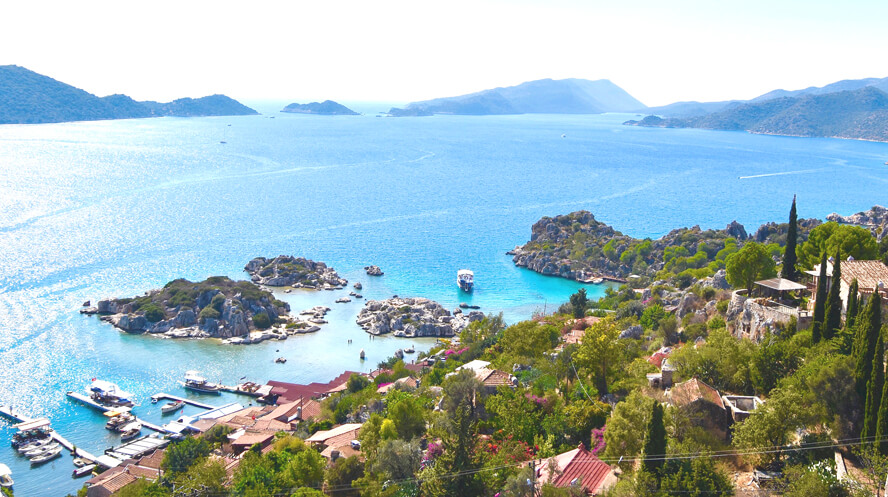 View from the Crusader Castle

In this photo, I have zoomed in a bit and you can see our boat and a mysterious object in the lower right corner.  We'll have to check that out when we get back down. 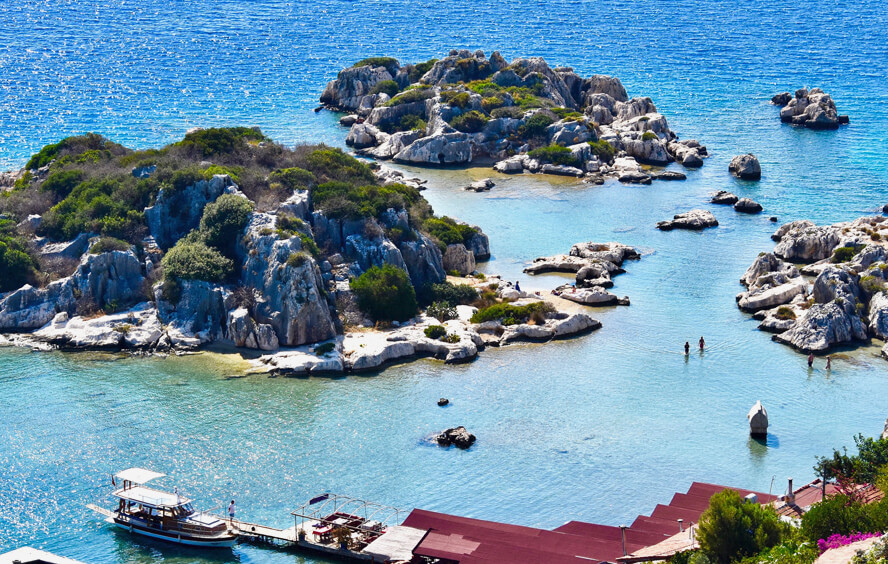 Our Boat from Castle

Getting up here means of course that you have to prove it was you who took these photos and not something anyone can download from the internet. Here's our proof. 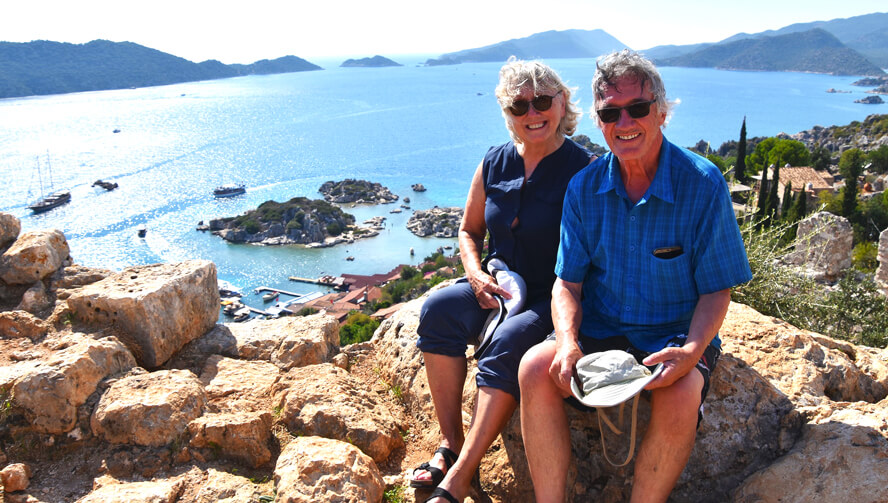 At the Crusader Castle of Simena

Returning to the waterfront you come upon one of the most photographed scenes in all of the Turquoise Coast and perhaps Turkey. This is the semi-sunken Lycian tomb of Simena, which was the mysterious object we saw from the citadel. Nobody knows who it belongs to or how it ended up here, but everyone on the boat had to take a photo. 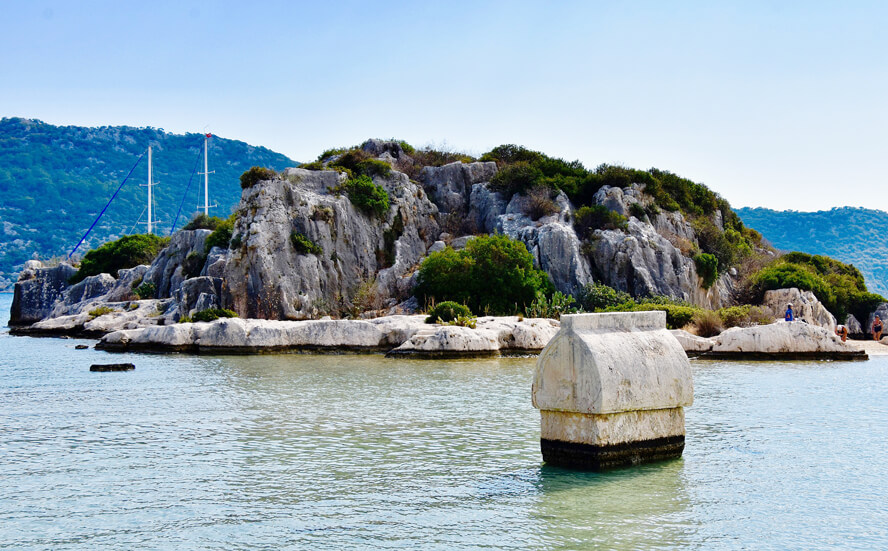 Lycian Tomb in the Water at Kalekoy

Returning to the waters we cruise past more Lycian tombs near the shoreline of the Turquoise Coast.

We then cross over to another side of Kekova and glide along the ruins of another sunken city, this one better preserved than the first we anchored at. I believe this to be the former Byzantine city on Kekova. 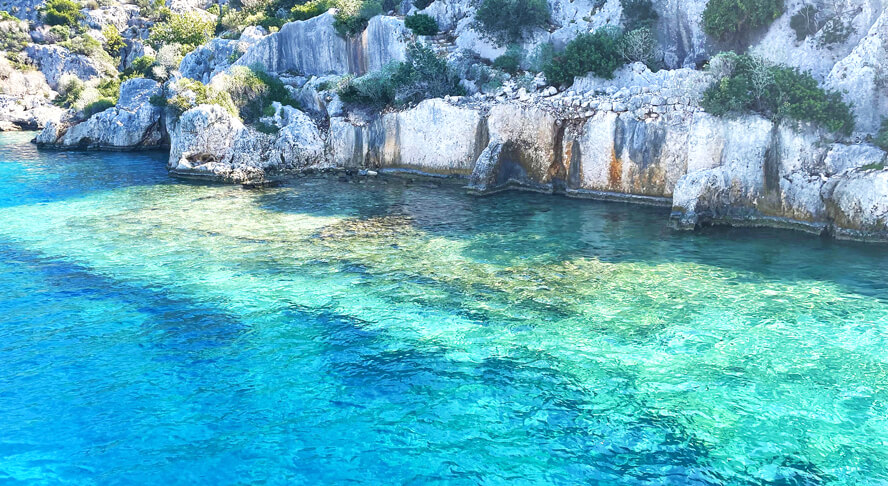 We have one final anchorage and a last chance to swim. Given the sweat, I worked up climbing the citadel this time I'm ready for a dip in the waters of the Turquoise Coast. It's actually very refreshing. 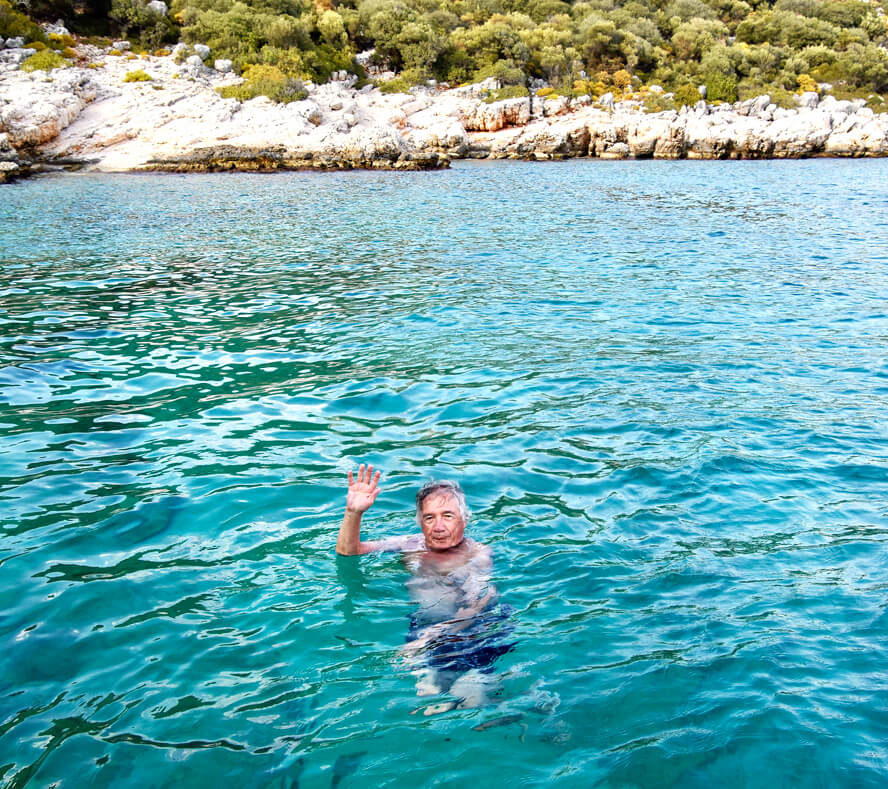 Swimming in the Turquoise Coast

After lifting anchor here we head back to Kas and all too soon this wonderful cruise comes to an end, but it is really not a cliché to say that the memories will last a lifetime.

Tomorrow we are headed for the famous city of Antalya, but we have some intriguing stops on the way. So long from the Turquoise Coast.