Fethiye to Kas - Lycian Tombs and a Great Market

In his latest blog post, Dale Dunlop, The Maritime Explorer, travels from Fethiye to Kas – Lycian Tombs and a Great Market and shares his experiences. If you are interested in dates and prices for this trip please check out our Small Group Tours to Turkey.

In the previous post on this Adventures Abroad trip to western Turkey, we toured Bodrum Castle with its unique Underwater Archaeology Museum. I love Bodrum and never get tired of visiting it, but alas, it is time to move on and continue our exploration of Turkey's beautiful Turquoise Coast. Today we are headed to the small town of Kas where we will spend a few days. On the way, we are going to stop in one of the most popular resort spots on this coast, the city of Fethiye, long famous for its legendary beaches, particularly Ölüdeniz where paragliders gather from around the world to soar above its fabled blue waters. However, we are going to stay closer to the ground and admire some of the city's Lycian tombs and maybe buy some spices at the market before moving on to Kas. Please join us.

Here is a map of our route to Fethiye from Bodrum which is very scenic as are almost all the routes along this part of coastal Turkey.

After leaving Istanbul we have traversed Thrace, the Troad, Lydia, Caria and now we enter the ancient kingdom of Lycia (pronounced lykia). We will be spending the next four days within its confines. Here is a map showing the boundaries of these kingdoms. 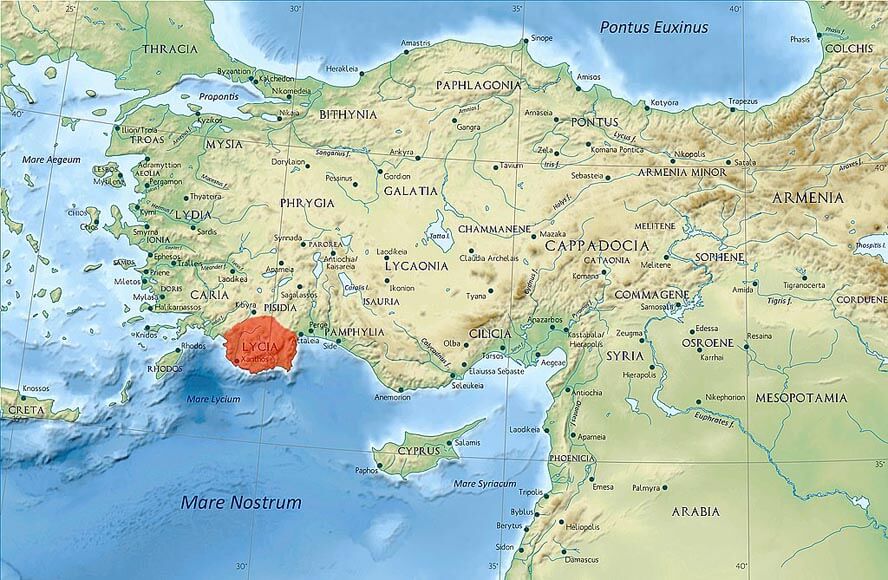 Map of the Ancient Kingdoms of Anatolia

Lycia has a very ancient history that goes back farther than the Hittites and was mentioned in Egyptian writings as far back as 2,000 BCE. Homer identified Lycia as the home of two of the greatest of the Trojan allies, Sarpedon and Glaucus. Like Caria and Lydia, Lycia came under Persian control for many centuries only to have the Greek influence reappear after Alexander the Great's conquests. Today Lycia is most famous for the rock cut tombs found in many places including Fethiye where we are headed and for one of the world's great long-distance footpaths, the Lycian Way which runs for 500kms. (310 miles) from near Fethiye to Antalya. On an earlier trip, Alison and I hiked portions of this magnificent trail and if I was just a bit younger I might try to tackle it in its entirety.

We arrive in Fethiye at about 11:00 AM and head straight for the Lycian rock tombs which are cut into the side of cliffs on the outskirts of the small city and are quite accessible with a short, but steep walk up to their base. There are over a thousand of these types of tombs in Lycia and they pre-date the Hellenistic era by a considerable period of time. 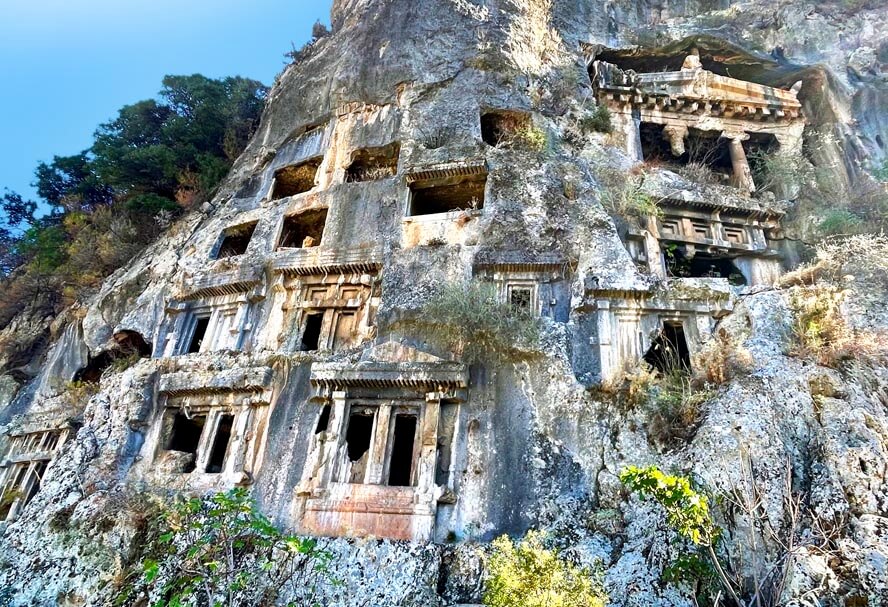 The tombs in Fethiye include one of the most famous, that of Amyntas the top of which I have photographed. It dates from 350 BCE and we know it was Amyntas' tomb because that is what is inscribed upon it. We don't know anything else about him. 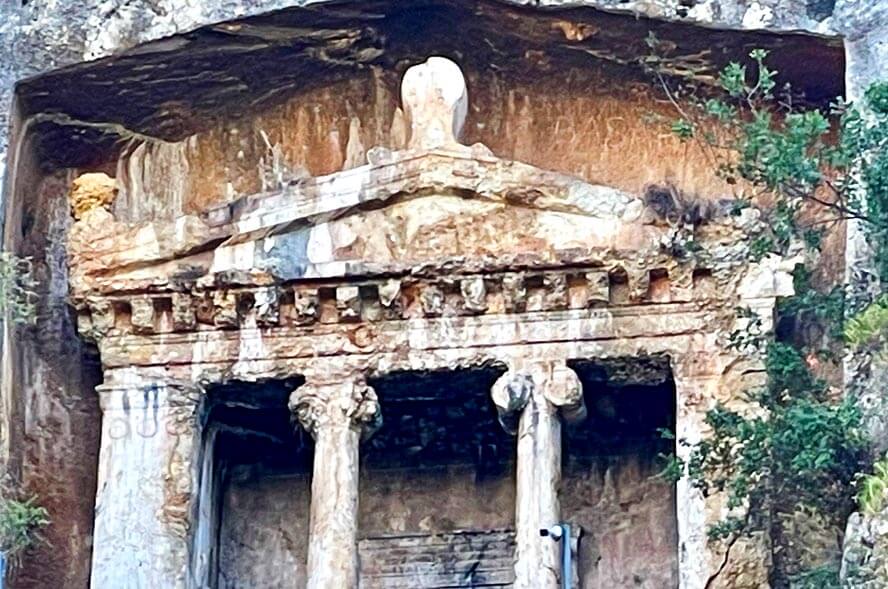 I have cropped this tomb photo because there were a large group of quite loud and frankly obnoxious teenagers hanging around the entrance. This is the only tomb you can go into at Fethiye. This is what a Lycian rock tomb looks like with a body inside, mine; although I must confess this is from a previous visit. The raucous teenagers dissuaded us from making the climb up to the entrance today. 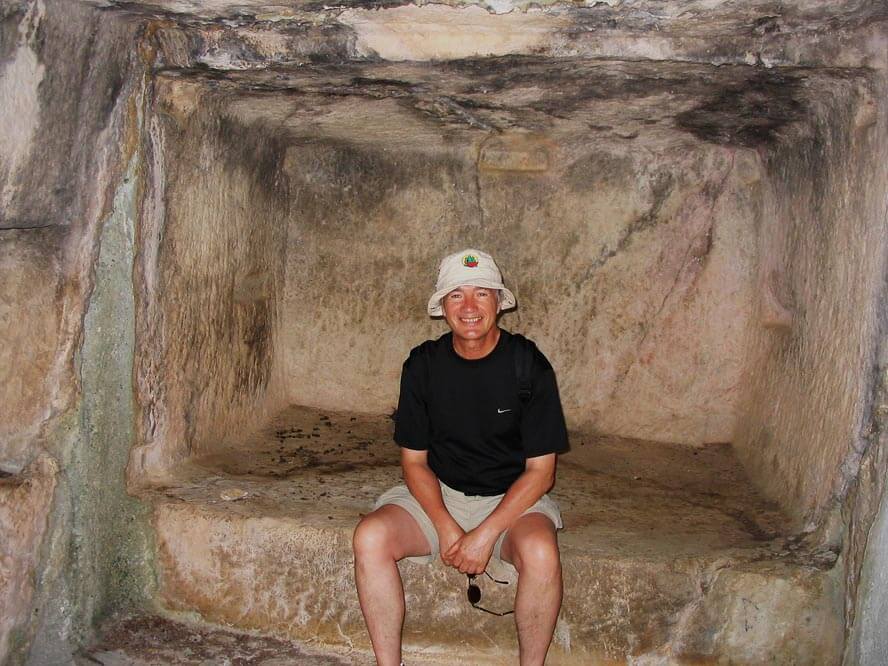 Inside a Lycian Tomb

Here is another photo of one of the Lycian rock tombs at Fethiye. 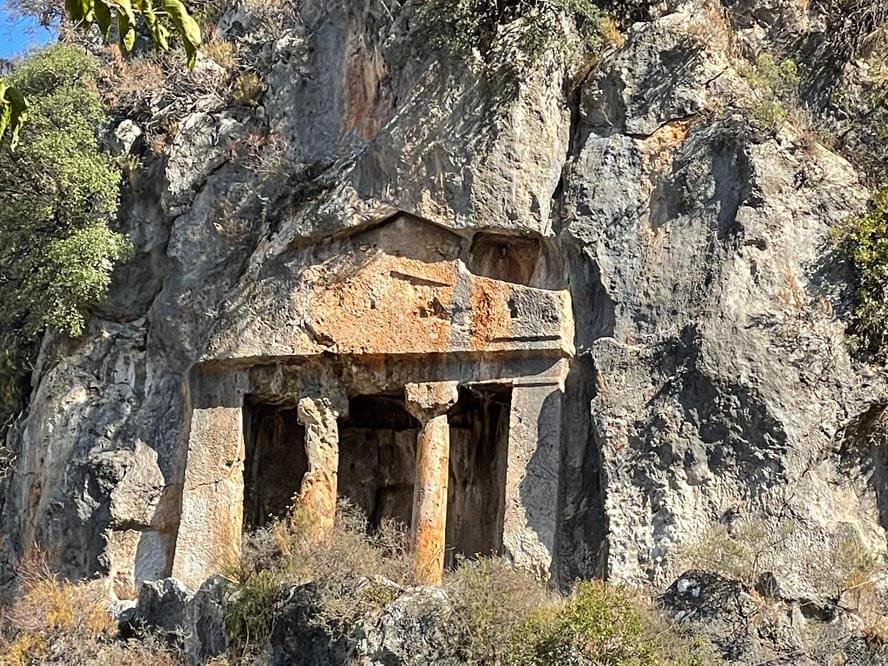 There is just something fascinating about these Lycian tombs and I hope that in future western Turkey trips AA might consider taking a boat cruise on the Dalyan River where I saw see these beauties a few years ago. 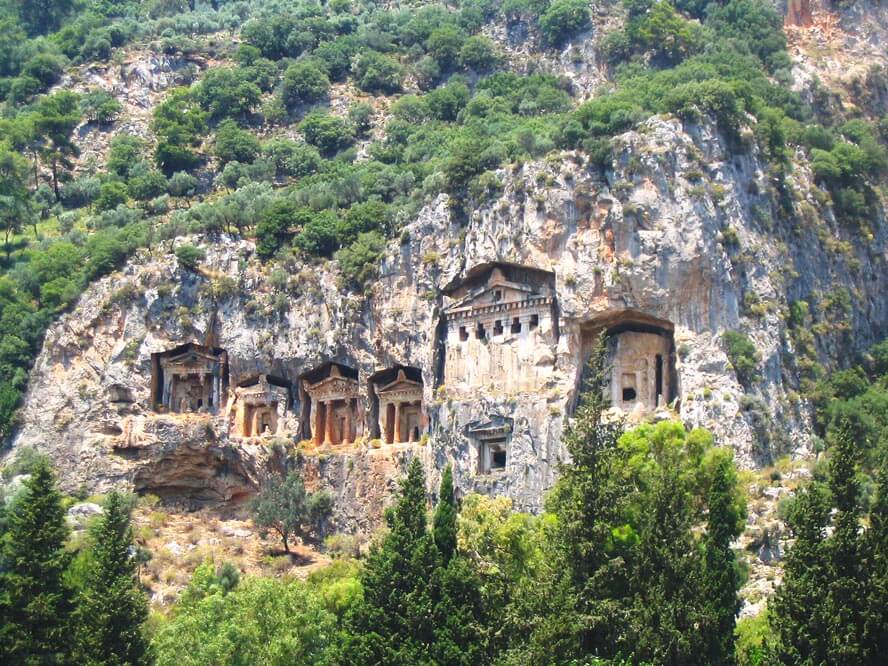 Lycian Tombs Above the Dalyan River

History tells us that there is a hell of a lot of places to have your body stored before it's hoped for transformation to a better place, whether it be a pyramid, a catacomb, a hypogeum, or even with an army to protect you. So why did the Lycians decide to cut these tombs high up on the sides of cliffs? It certainly wasn't to deter grave robbers because every one of these tombs was looted in the centuries after their completion. Most sources point to the belief in some type of angelic creature that would take these hitchhiking souls to the nether world. The higher up your tomb, the better your chances of hitching a ride. Go figure.

Climbing up to the base of these tombs in the intense late morning heat brought on not only a sweat but an appetite as well so Yasemin led us into the centre of old Fethiye where there are a ton of restaurants near the covered market. Alison and I chose Megri after I saw this horizontal donair spit which is the only one I have ever seen. And the grilled peppers smelled and looked delicious, so it was an iconoclastic donair for me. 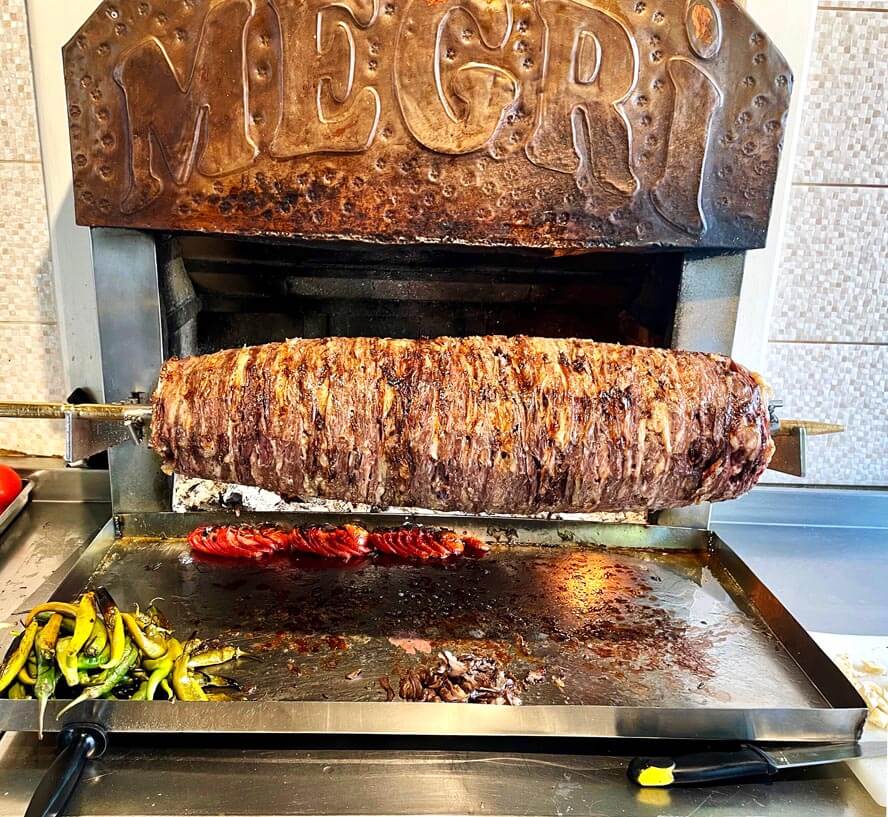 This is what a lying-down Turkish donair looks like. Surprisingly it tastes just the same as the vertical donair, delicious on both counts. 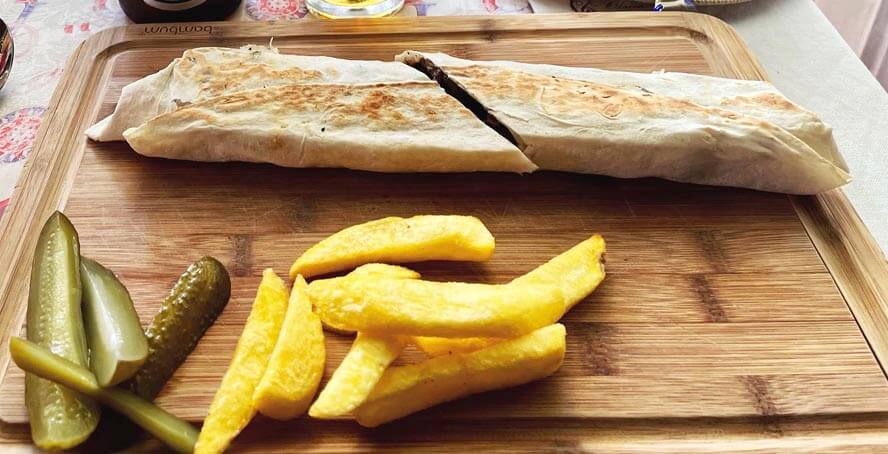 After lunch, we had time to explore Fethiye's market which was not crowded, not full of hucksters or junk, but was actually intended to be a place for locals to shop. Some of the best photo opportunities in Turkey or most places in the Middle East are at the spice markets. The contrast of colours is real eye candy. Here are a few shots from the Fethiye market. 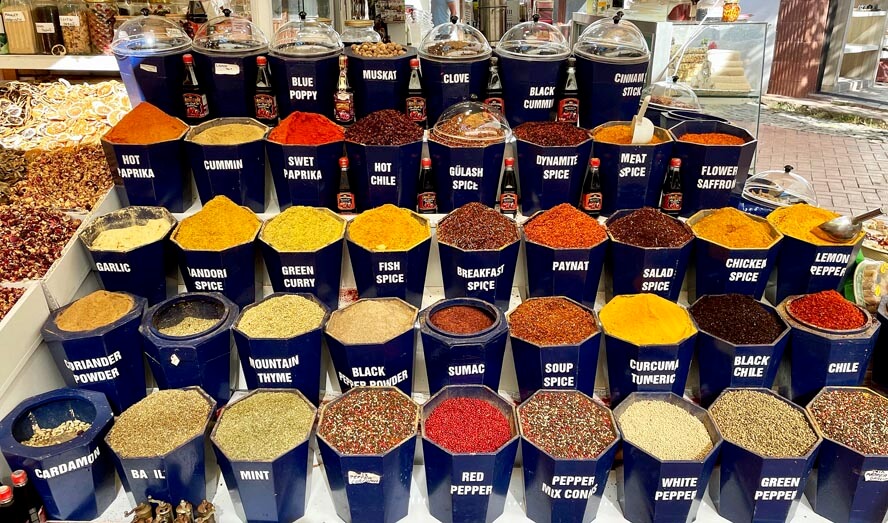 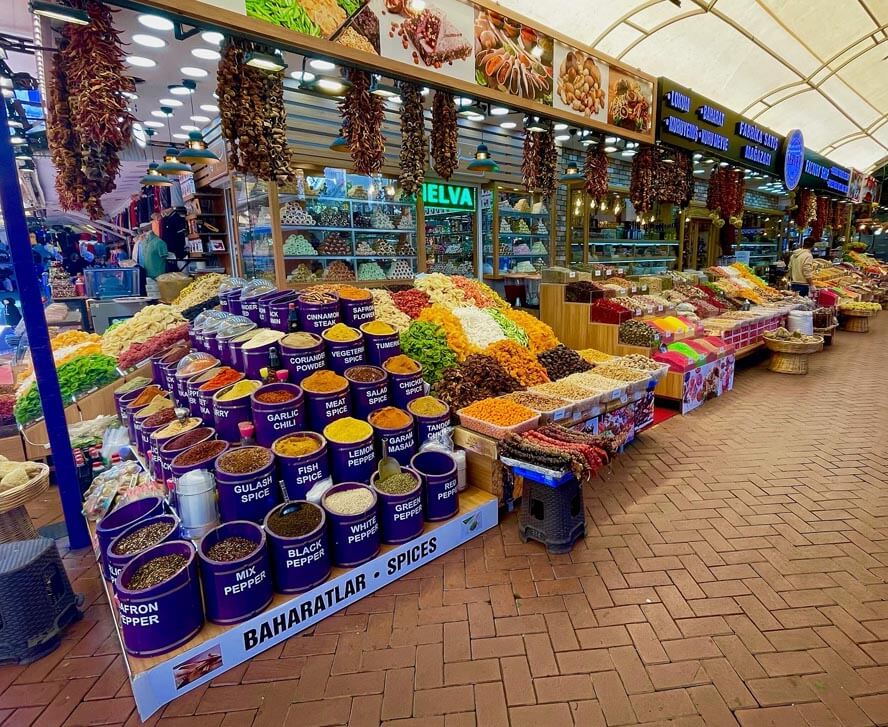 And it's not just spices, but teas, nuts, dates and many other Turkish products that make a trip to a genuine market a great experience. 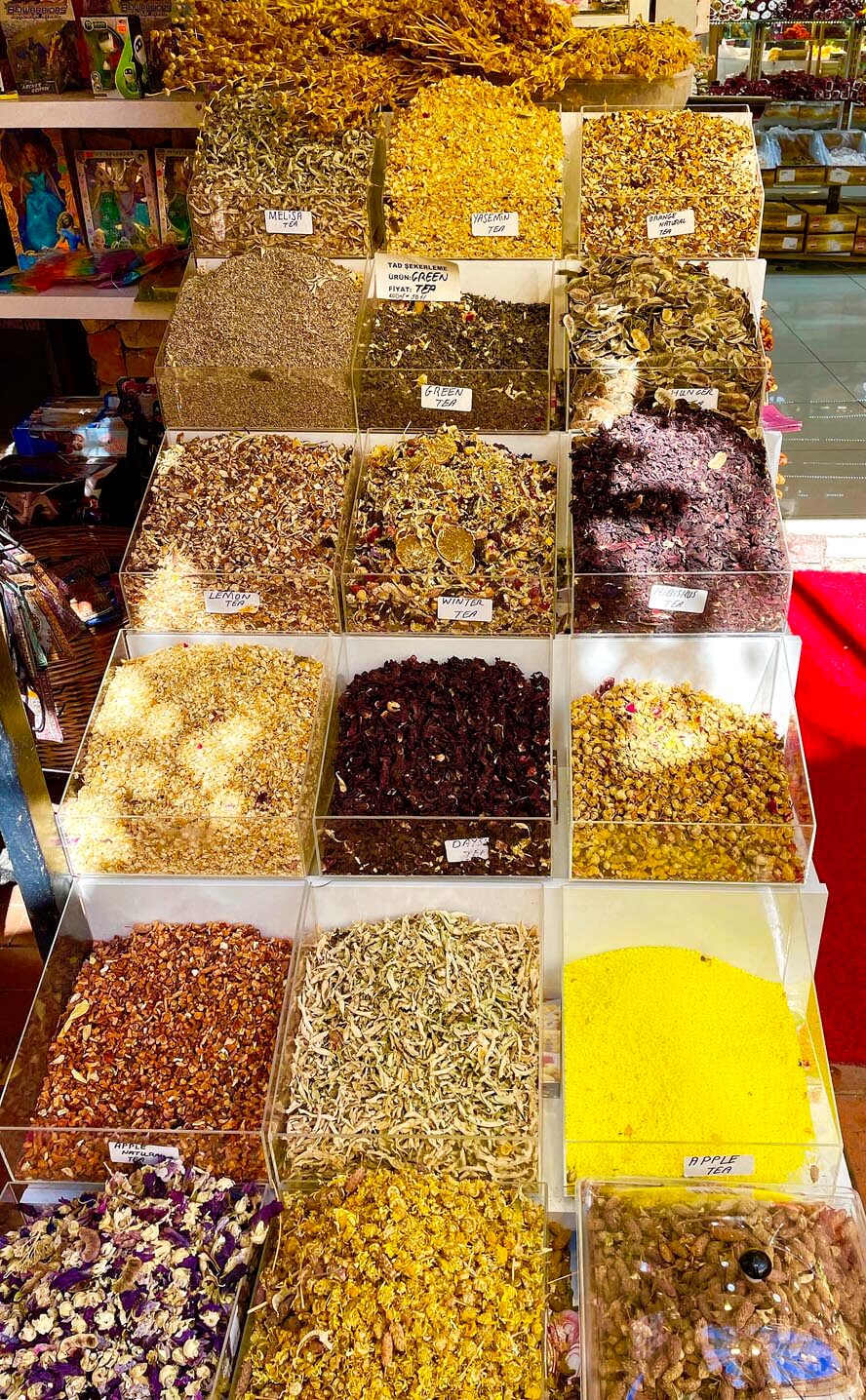 It was time to board the bus and continue our journey to Kas which along with Bodrum is my favourite town on the Turkish coast.

This is a map showing the route, which for the first hour out of Fethiye is away from the coast, but then it returns for perhaps the most scenic portion of the entire trip as the road hugs the side of the cliffs with the seashore far below. There are plenty of hairpin turns and this Turkish version of the Amalfi coast is not for the faint of heart.

Just outside Kas, we stop to get a look at this beach where dozens of sun and surf seekers have clambered their way down to the beach far below from the highway several hundred feet above. 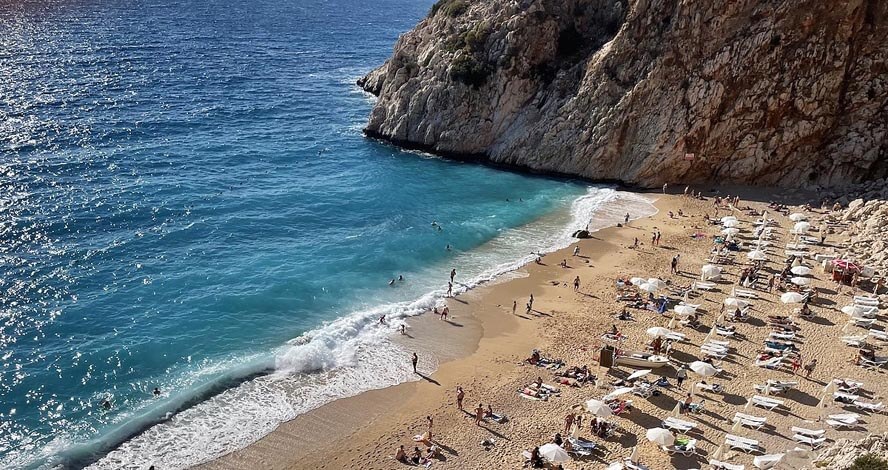 Kas is the smallest town we will stay in during this AA trip. At less than 7,500 residents it has a unique charm that none of the other places we have visited can match, largely because the older town centre is totally pedestrianized and there are many verdant little lanes and alleys to explore like this one. 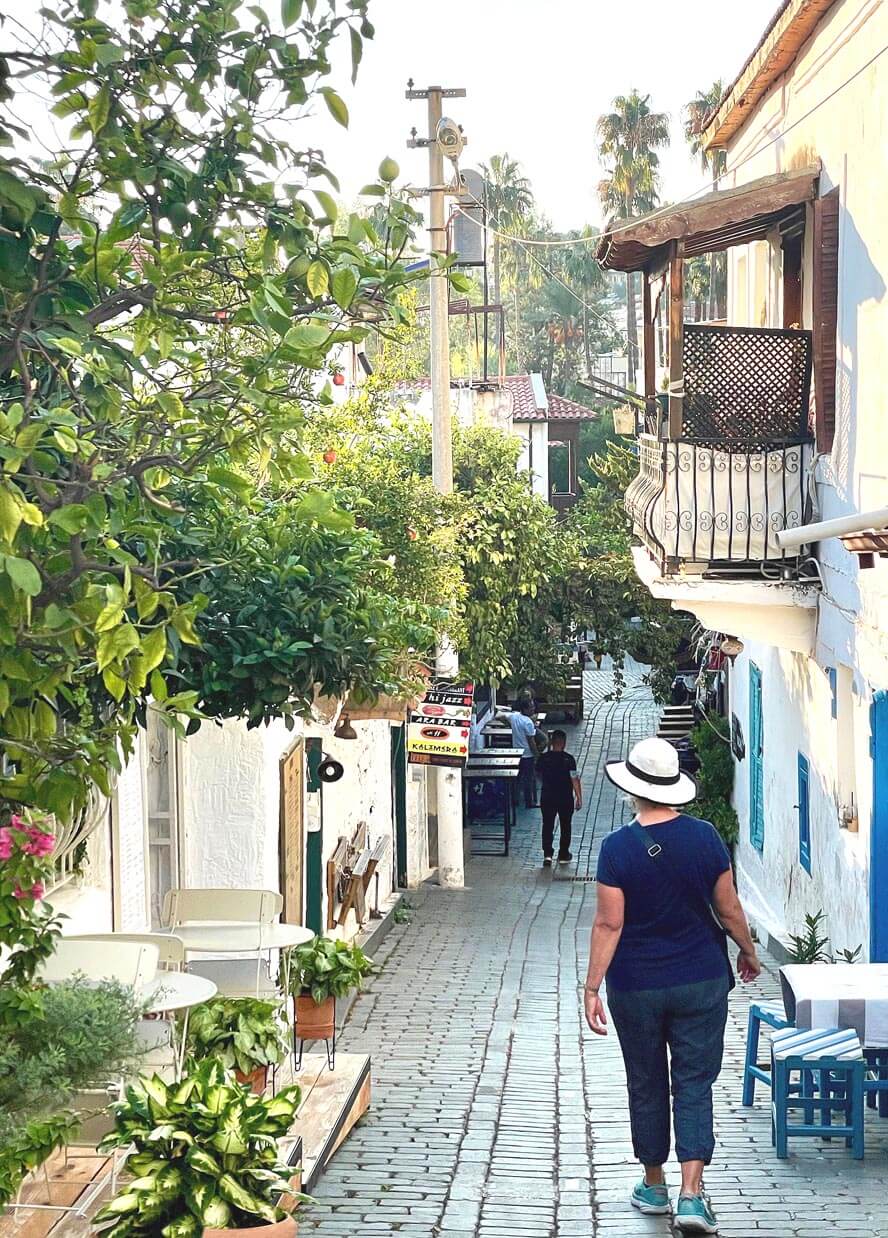 While like Fethiye, Kas has some very good Lycian rock tombs just outside of town, it also has another completely different type of Lycian tomb that you can stumble across right in the middle of town.

This is the Lion Tomb (aka King's Tomb) which dates to the 4th century BCE and has stood here largely unmolested for 2,500 years as Kas has grown up around it and Lycian, Hellene, Roman, Seljuk and Ottoman Empires have come and gone. Think about that, it's really an amazing thing to see and it is the symbol of the town today. 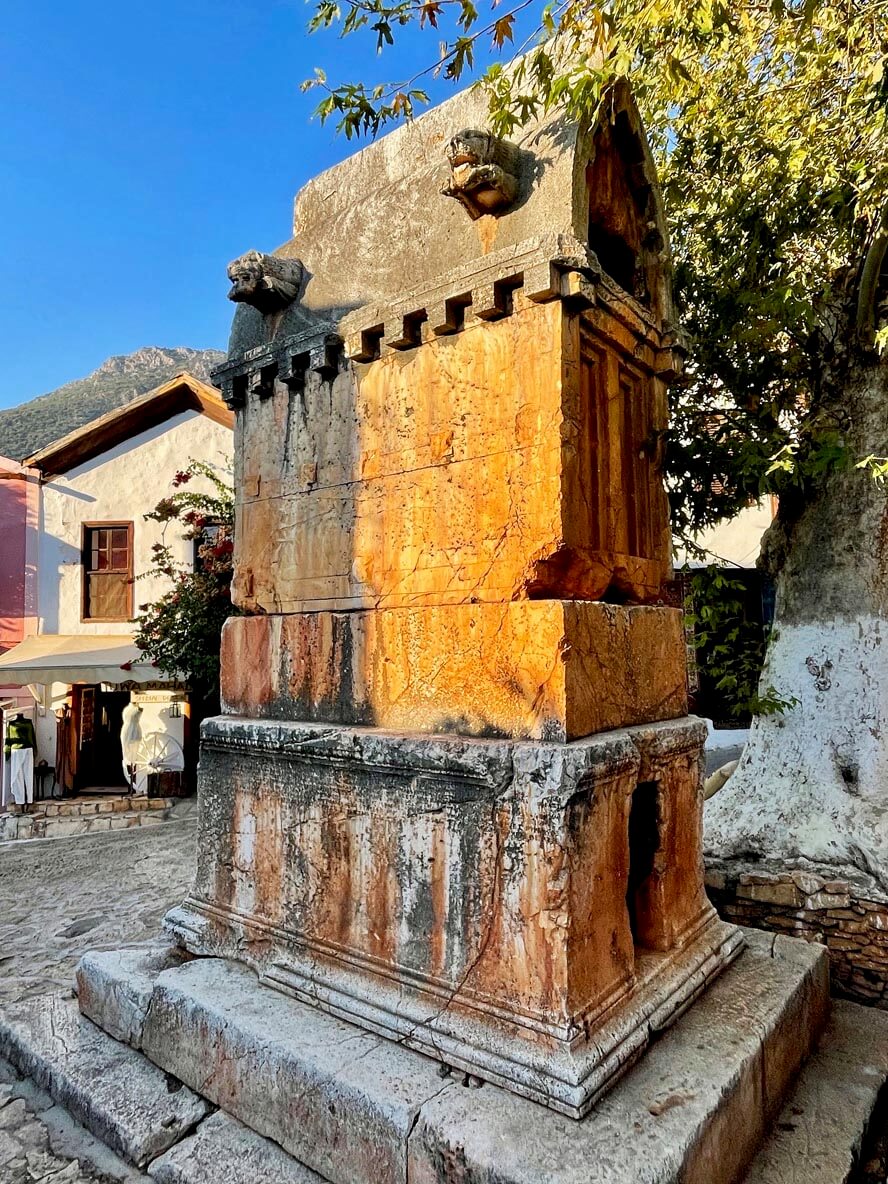 The Lion Tomb of Kas

Sometimes referred to as boat tombs because their tops or more properly ogivals resemble the keels of ships, you can find these all over this area of Lycia. I can find no logical explanation as to why the Lycians would have favoured two entirely different types of tombs that apparently were contemporaneous. All I know is that they are both wondrous to behold.

Here's another one right in Kas. 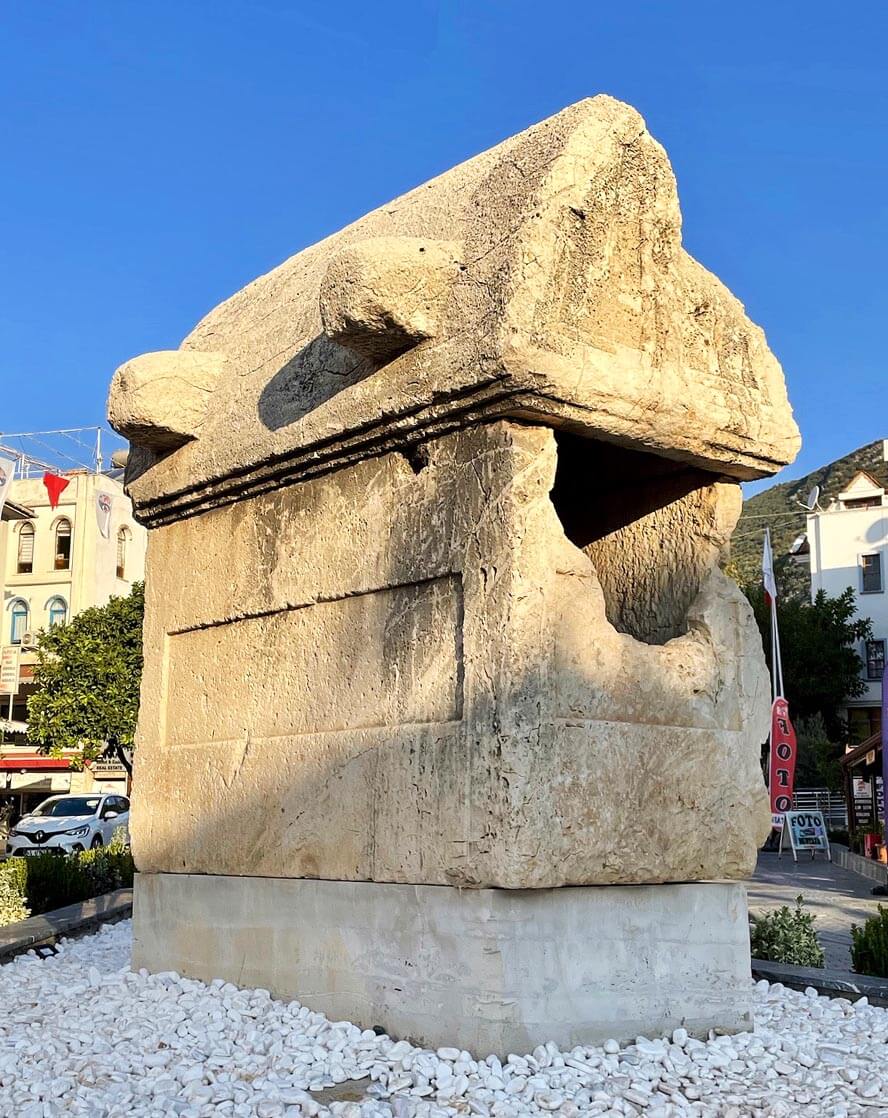 We'll end this post with yet another great meal on today's journey from Bodrum to Fethiye to Kas.

Meydan is one of many restaurants fronting on the large central square of the town, specializing in, you guessed it – Turkish cuisine. This is yet another great lamb dish that I indulged myself in during this trip. For some reason, it was called lamb sole on the menu, but I couldn't see any connection to fish. 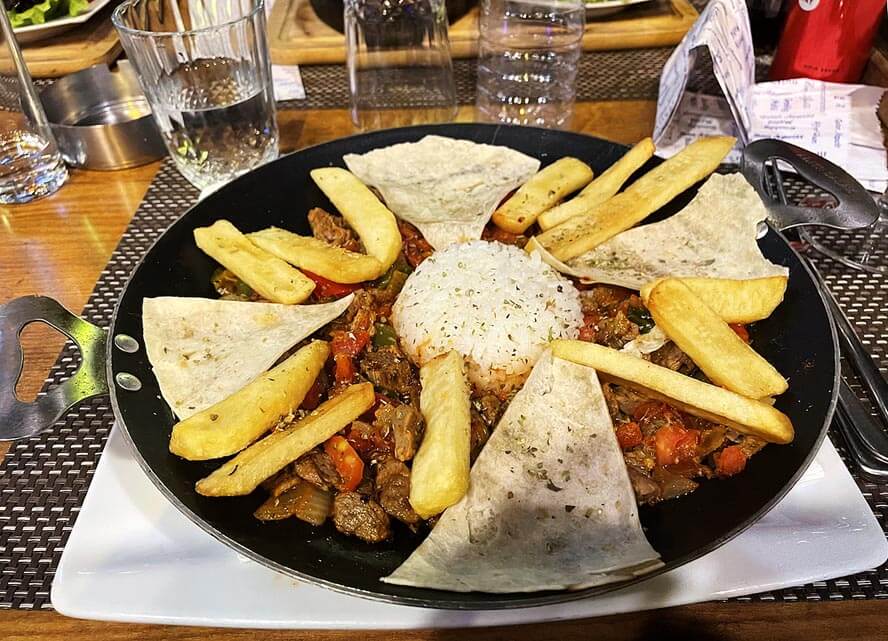 Alison went with this almond chicken which she rated as one of the best mains she had on the trip. 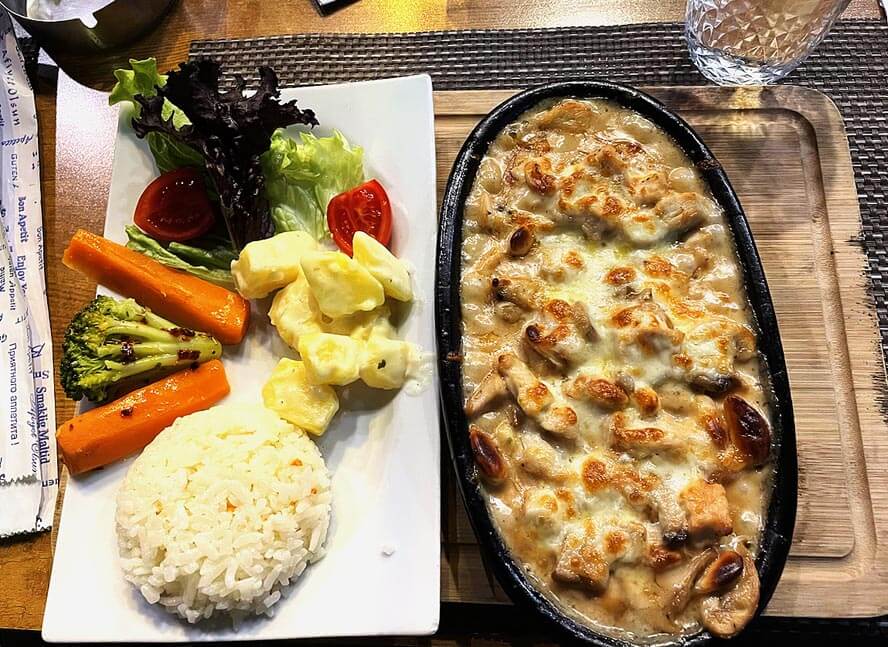 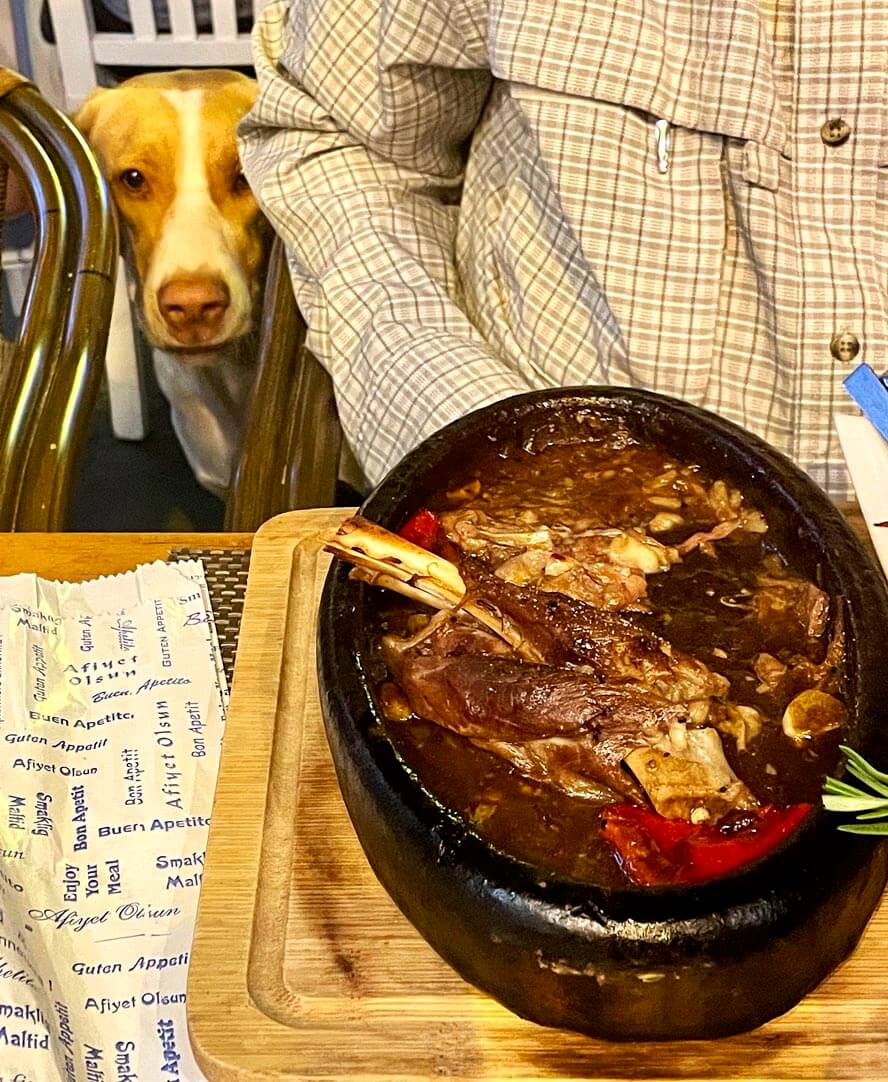 We have an early night tonight because tomorrow we are heading out to sea on a cruise. It promises to be a highlight of the trip. Please join us aboard.

Published on 26 April 2022
< French Polynesia with Adventures Abroad
The Turquoise Coast by Boat >
Recent Blog Posts
Phaselis - Romantic Forested Ruins by the Sea
Myra - Visiting the Home of St. Nicholas
Te Moana - A Great Introduction to Tahiti
The Turquoise Coast by Boat
Fethiye to Kas - Lycian Tombs and a Great Market
French Polynesia with Adventures Abroad
Can't find what you're looking for?