In his latest blog post, Dale Dunlop, The Maritime Explorer, travelling in Turkey, stops at Myra - Visiting the Home of St. Nicholas. If you are interested in dates and prices for this trip please check out our Small Group Tours to Turkey.

For the past two days, our western Turkey Adventures Abroad tour has been stationed in the small Mediterranean town of Kas. Yesterday we enjoyed an outing by boat on the Turquoise Coast which will surely be one of the highlights of the entire trip, but it's time to move on. Today we have several interesting stops before reaching the city of Antalya starting with Myra which quite plausibly was the home of the original St. Nicholas. Who knew that Santa Claus came from warmer climes than the North Pole? Please join us as we see more Lycian rock cut tombs before meeting St. Nicholas.

The journey from Kas to Demre, the modern name for Myra, is a relatively short 45 minutes.

However it takes us a little longer as Yasemin, our guide asks the driver to stop so we can get this final look at Kas and the Greek island of Kastellorizo as we head south along the Mediterranean coast.

View of Kas with Kastellorizo

Myra is another one of those cities on the Aegean and Mediterranean coasts of Turkey that have very ancient origins and have changed hands a multitude of times over their history. In the case of Myra, it started as one of the Lycian league cities and later became Hellenized and then part of the Roman Empire, a sequence that we are quite familiar with by now. While little remains of either the Lycian or Greek period city, there are still a notable number of Lycian rock cut tombs that will be our first stop in the Myra area. They are so numerous that they are collectively referred to as necropoleis rather than just the somewhat solitary sarcophagi we saw in Kas and Kekova.

They are indeed an impressive site. 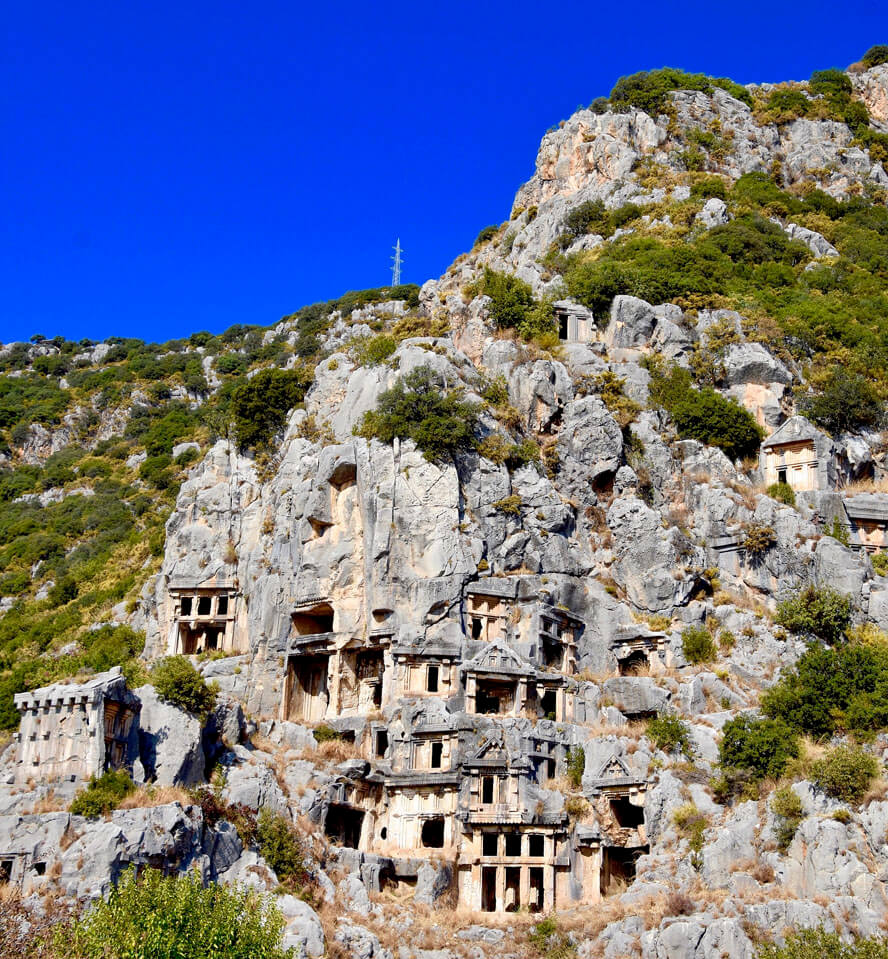 Here's a closer look. If one didn't know better, you might confuse these tombs for actual dwelling places. 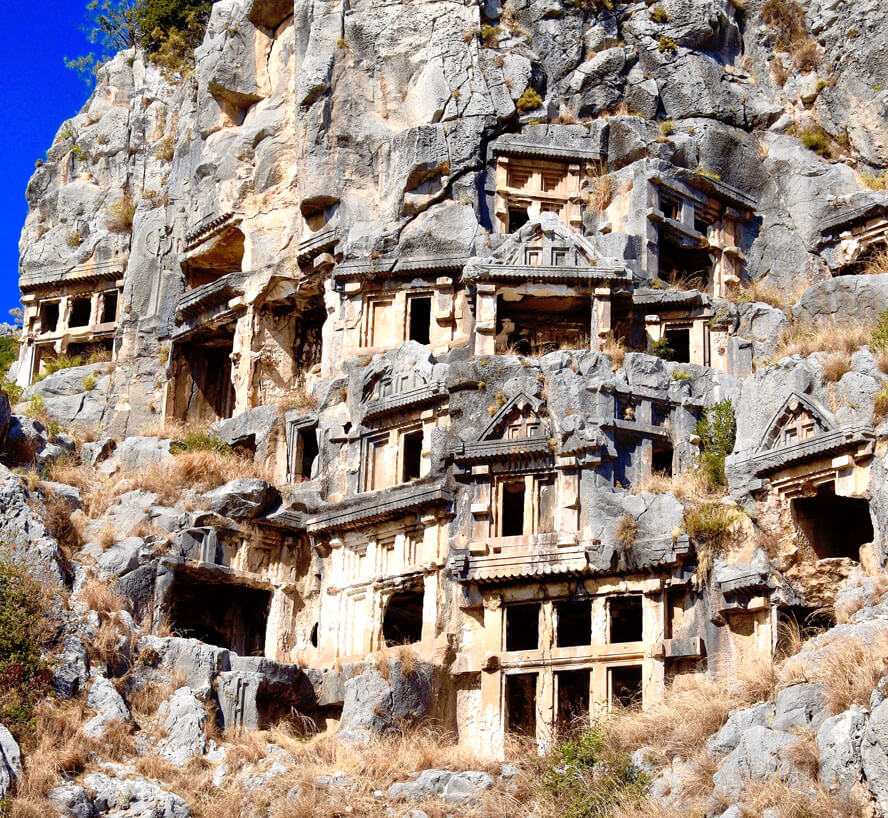 Just below these rock cut tombs in another ancient ruin, one not nearly as old as the tombs. This is the Roman theatre of Myra which was rebuilt after the original was destroyed by an earthquake in the year 141. Once again the absolute lack of tourists makes visiting one of the great theatres of antiquity a special event for our group as I was able to climb up to the top and get this shot. 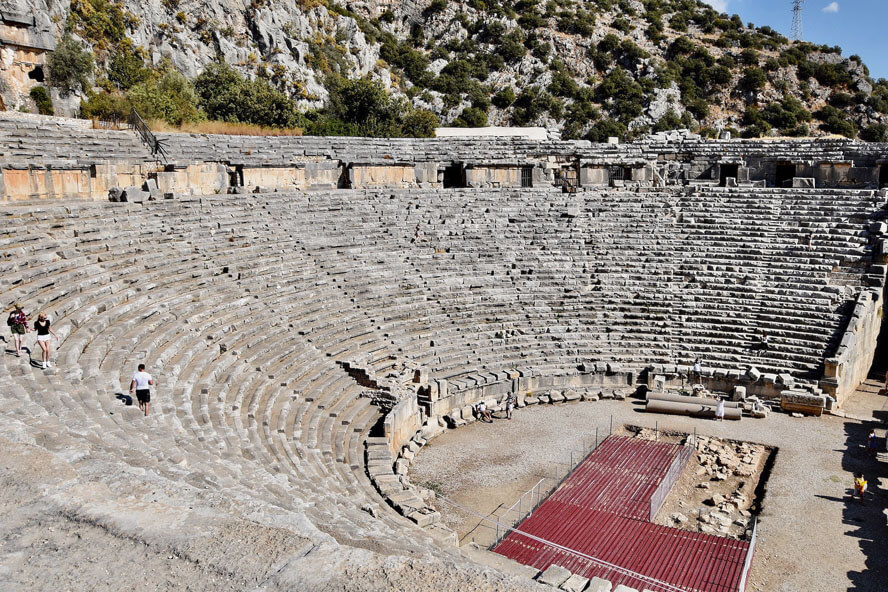 Here's the view looking directly down at the stage. It is remarkable to think that the acoustics in this place was so good that actors on stage could be heard from this high up without the benefit of amplification. 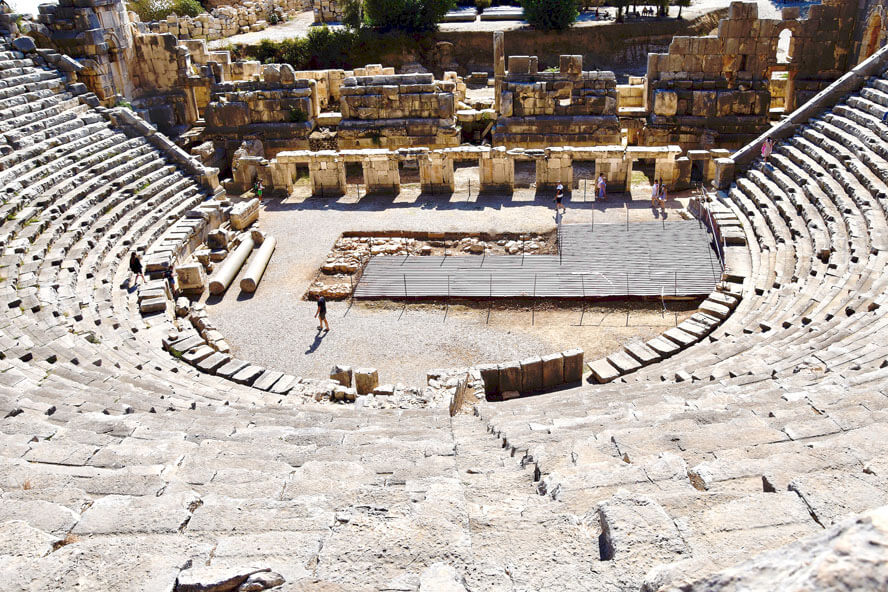 Looking Down at the Stage

Every Greek and Roman theatre had special seats reserved for the ruling class, whether it be Emperor, Senator, Governor or some other local official. Today one of those seats has been reserved for me. Too bad there's nothing on the playbill. Note other members of our tour group wandering about as if we own the place. 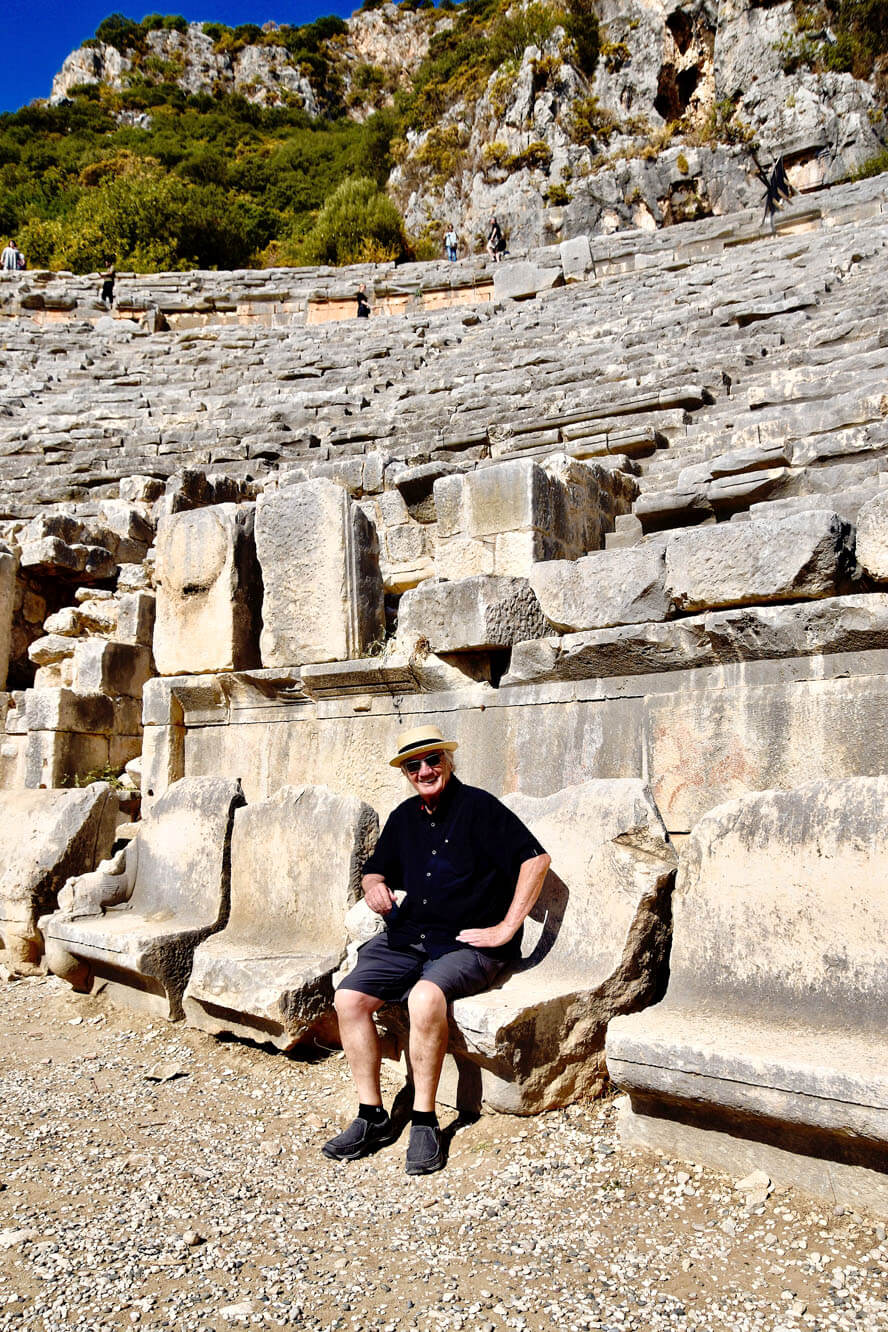 In the Royal Seats, Myra Theatre

Just outside the Theatre of Myra Alison stands beside this piece of the theatre depicting three actors. 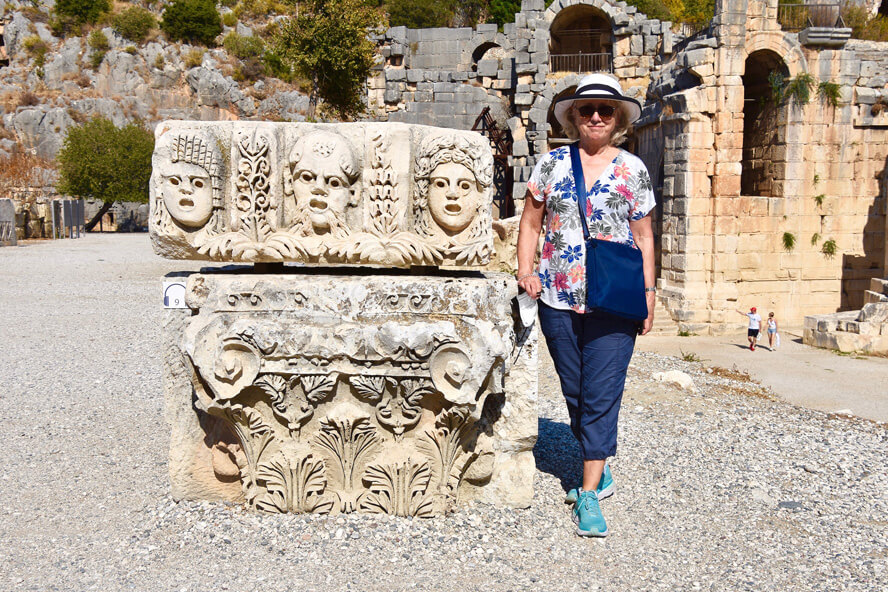 Alison Outside the Theatre

Who was St. Nicholas?

We've all heard of jolly old St. Nicholas and in fact, he has been part of most of our lives since our earliest memories of Christmas morning, rushing to the tree to see what presents the guy also known as Santa Claus had left for us. But who was St. Nicholas and how did he evolve into a fat guy dressed in red satin trimmed with white fur hawking coca-cola?

Not surprisingly, like most early Christians who became saints, the life of St. Nicholas is a combination of fabrications invented many years after the saint's death mixed with a few almost indisputable facts. If there was ever a group that one could ascribe a set of Kellyanne Conway's 'alternate facts' to, it is the lives of early Christian saints and martyrs. In the case of St. Nicholas, it was miracles up the ying-yang. My favourite and one very popular in medieval times is the miracle of the pickled children. During a famine, a depraved butcher lured and slaughtered three children, pickled them in brine and offered them for sale as ham. Old St. Nick cottoned on to this culinary deception and immediately resurrected the tots, although they seem to have grown a bit in this depiction. BTW I have my doubts about the validity of this tale, but you never know. 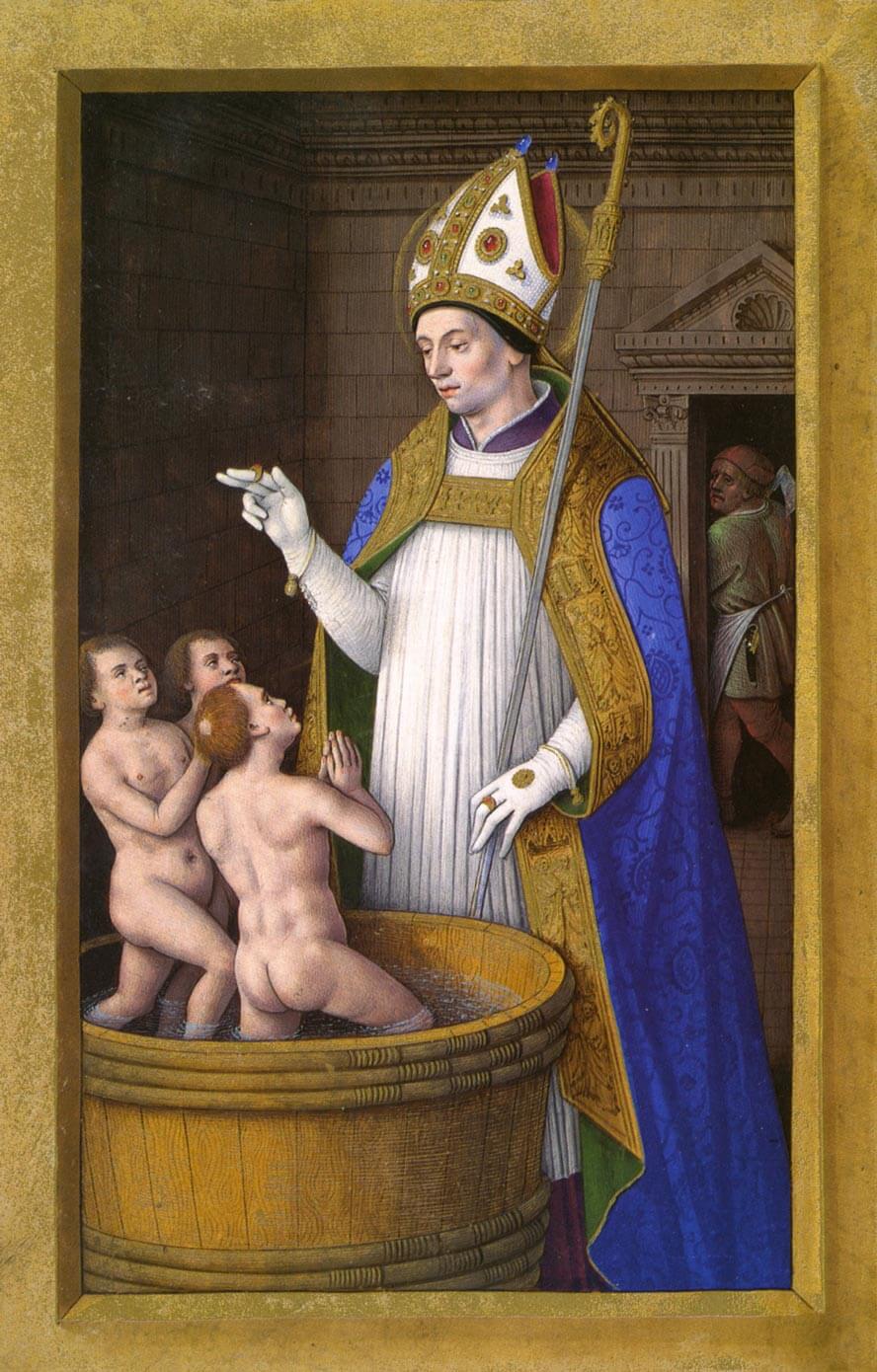 The Miracle of the Pickled Children

The combination of St. Nicholas' propensity for generosity and his love of children made him a natural to evolve into today's porcine gift giver.

Turning from the alternate facts, we do know that St. Nicholas was made Bishop of Myra sometime early in the 4th century. Ok, that's it. I can't even find out when he was canonized although it seems to have been not long after his death as he was being venerated as a saint by the 5th century. Everything else is conjecture including where he was originally buried. On the Blue Cruise Alison and I took on a previous visit to Turkey we stopped at a small island called Gemiler, not far from Myra, and were guided to the remains of a 4th century church that was said to be the final resting place of St. Nicholas. This is a photo I took of the church back then. 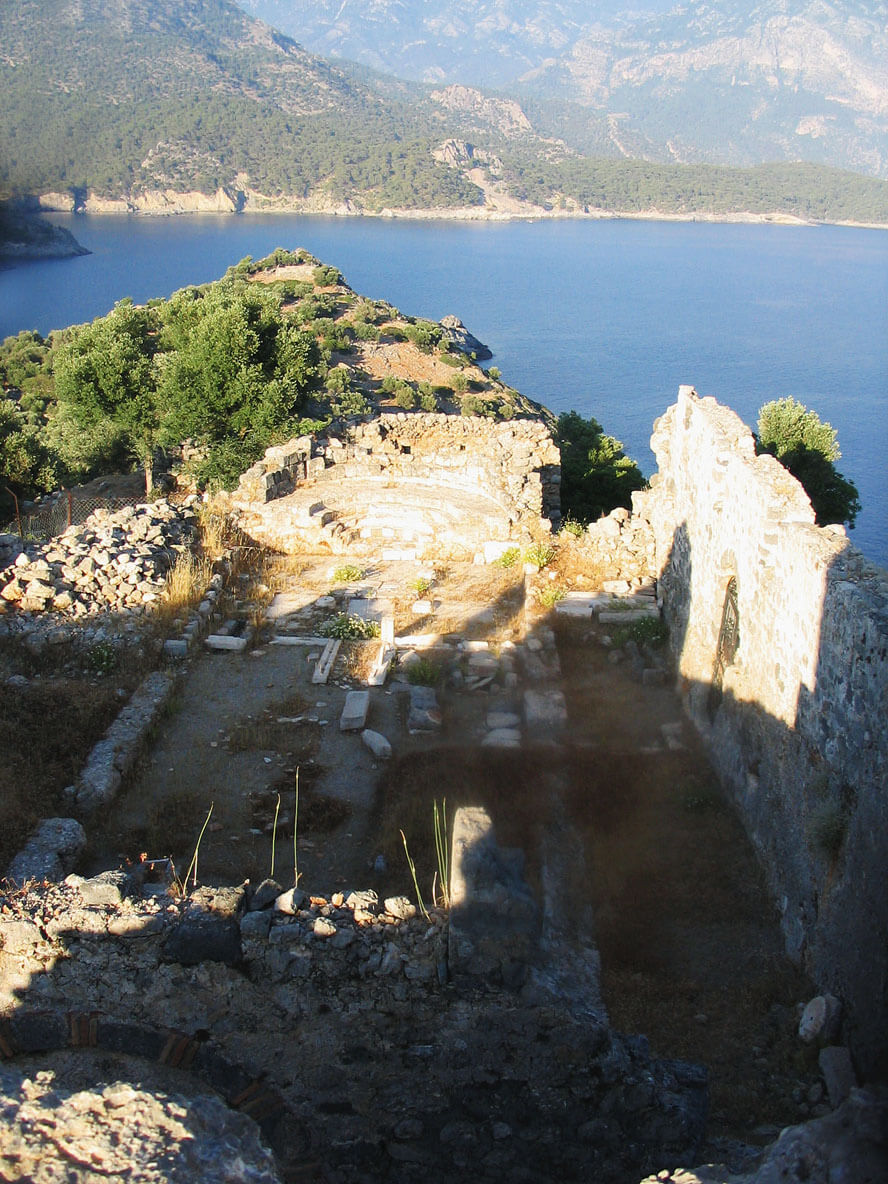 Today we are headed to a much grander construction in Myra that dates from the 6th century and is currently the St. Nicholas Church Museum and a site on the UNESCO World Heritage tentative listing status. This is the more traditional site for St. Nicholas' burial, although it's plausible that he was originally buried on Gemiler island and as his fame grew, his remains were transferred to the new and grander basilica. Unfortunately, they were not safe from other Christian bone robbers who were very common in early medieval times. The body of St. Nicholas was especially valued for the supposed myrrh that it produced and could be sold for a pretty price. In 1087, on the pretext of saving the bones from the onslaught of the Turks, a party from Bari in southern Italy stole the bones and took them back to their city where they became the centrepiece of the famed Basilica of San Nicola. Much to the delight of the thieves the sarcophagus continued to produce the profitable myrrh and it is still collected every December 6th on his Saint's Day.

Not surprisingly the Turks are still pissed off about the theft of St. Nicholas and want him back, not for religious purposes, but for his potential draw as a tourist attraction. Equally not surprising, the burgers of Bari have flipped the Turks the bird over this request.

So let's go see where St. Nicholas is not buried. On the way, we pass the Santa Claus Restaurant proving that even the Turkish non-believers aren't above making a buck on the fame of St. Nicholas' alter ego.

If you are expecting something along the scale of Hagia Sophia or even the remains of the Basilica of St. John in Ephesus, forget it. Since the church was built in the year 520 the Demre River has mostly silted up and the ground level is now over fifteen feet higher than was back then. To get to the church you literally have to walk down a flight of stairs rather than the usual other way around.

Near the entrance is this quite fine statue of St. Nicholas that incorporates both his saintliness and his generosity. This statue captures perfectly how St. Nicholas morphed into Santa Claus. 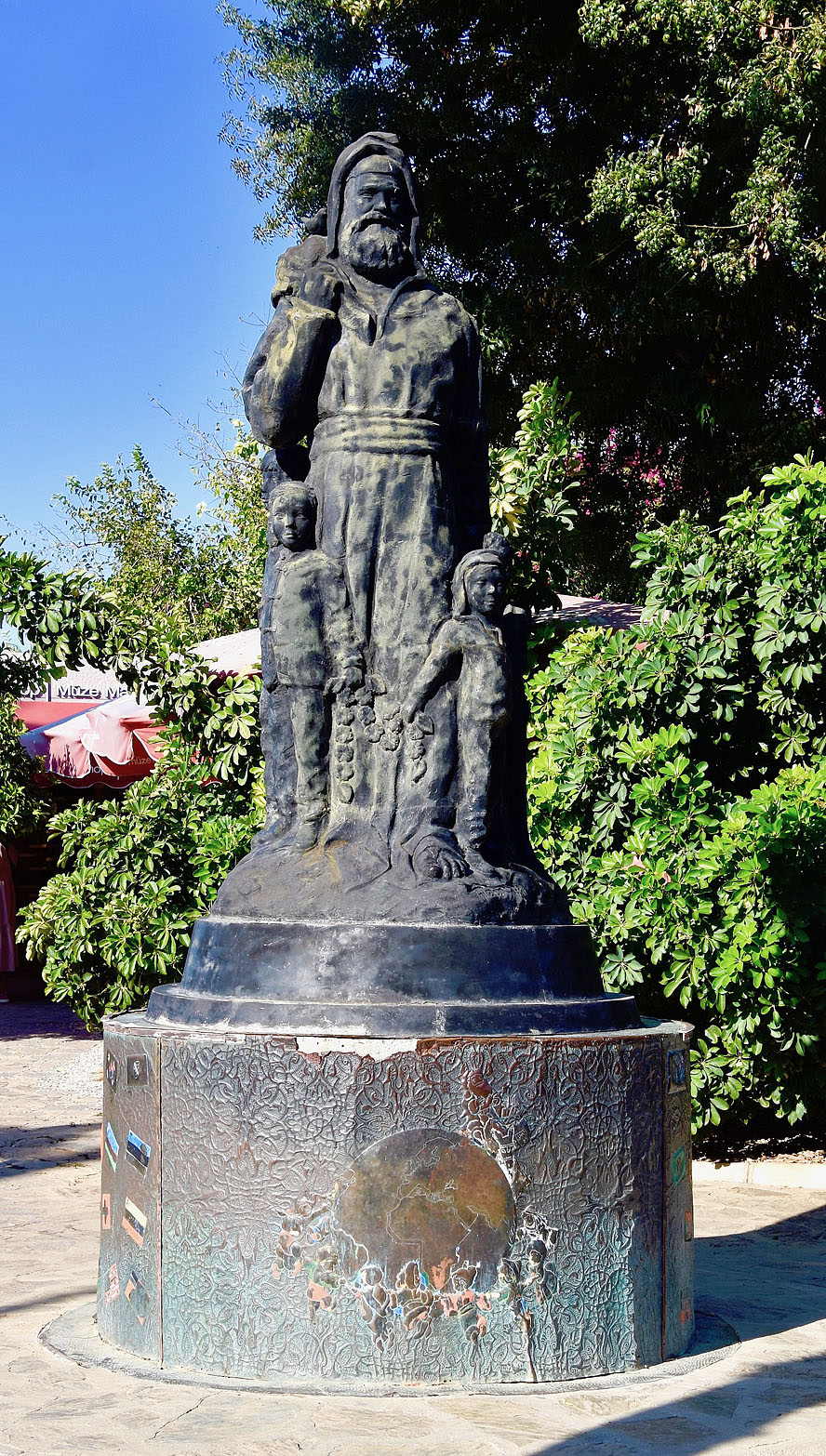 Aside from having to step down to enter the church, the entire structure has an artificial cover that is designed to protect the frescoes for which the church is known, from the elements. Unfortunately, this detracts from the overall effect, but I understand why it is necessary. Architecturally there is not much to wonder at as most of the structure is gone, however, there are some interesting elements incorporated into what is left to be of interest, such as this repurposed pediment. 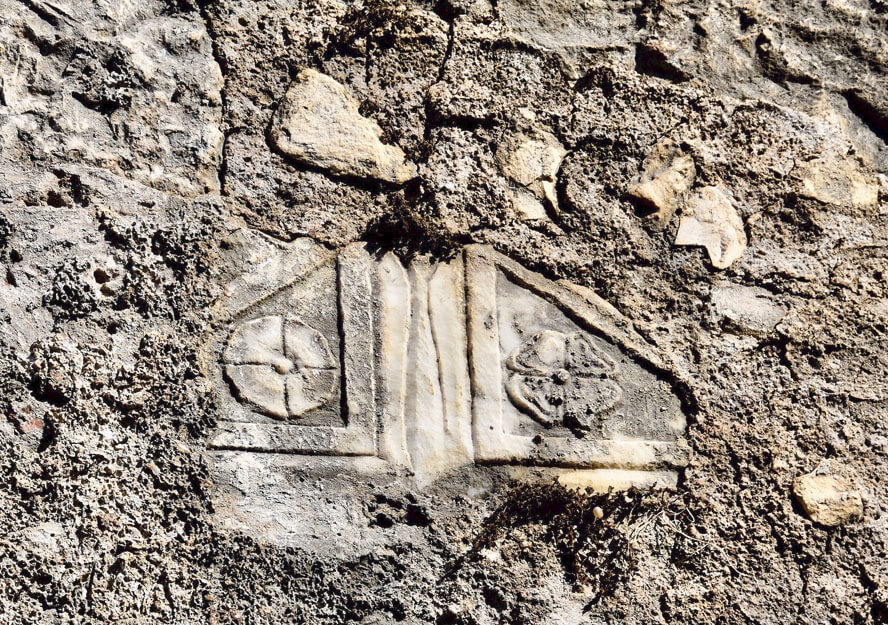 And these pillar fragments. 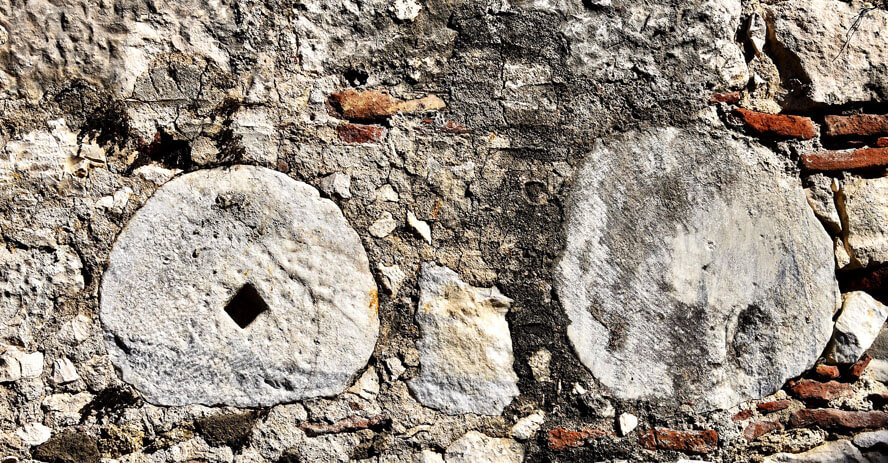 However, it is definitely the frescoes that are the stars of the Church of St. Nicholas at Myra. Our guide Yasemin leads us through an explanation of each of the better preserved examples. I will highlight just a few.

This is probably the best preserved of all the frescoes and has a vibrancy that this photo does not do justice to. Ironically no one has any idea who the saint portrayed is meant to be. 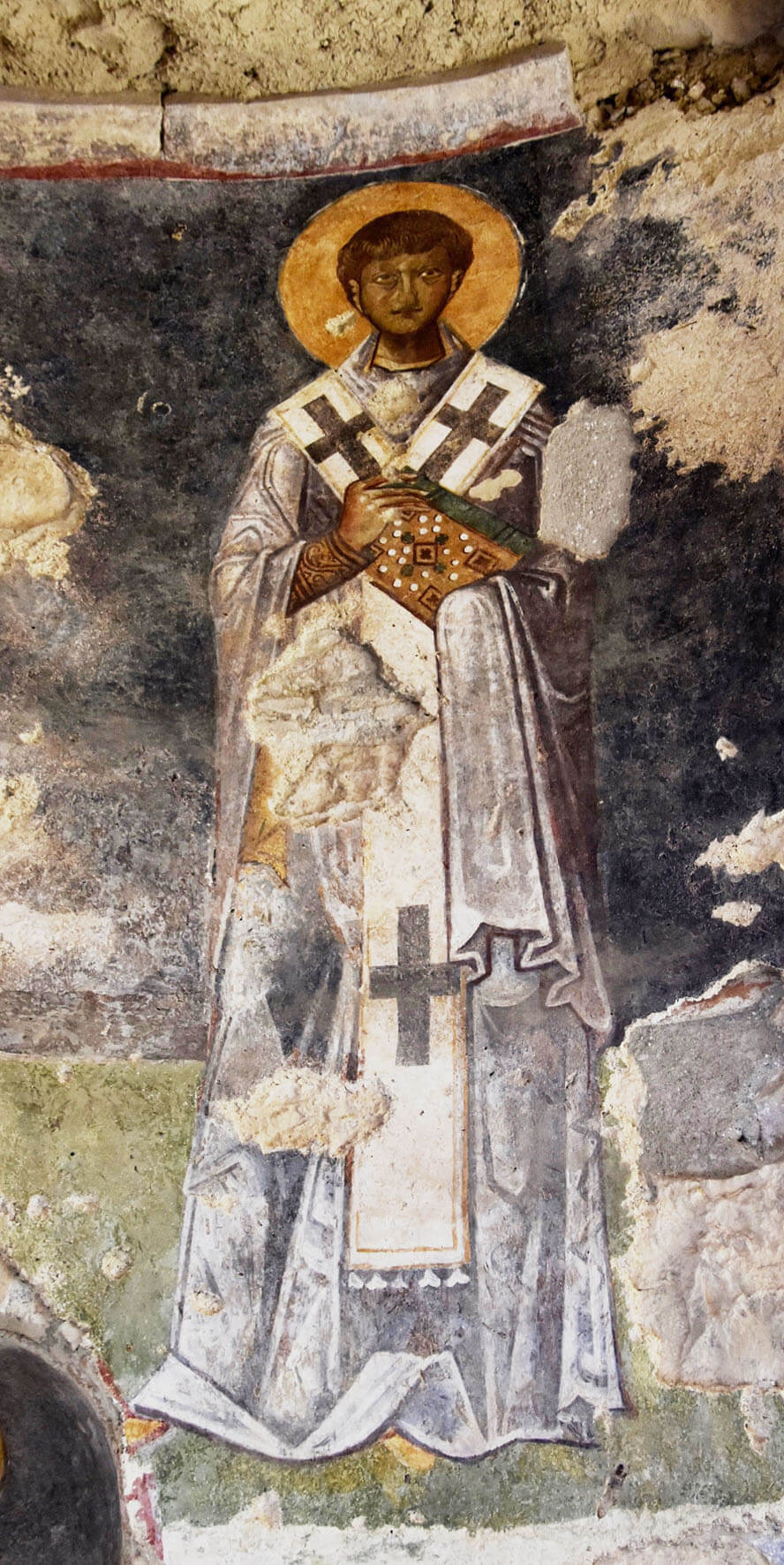 This fresco represents one of the more unusual ecumenical conundrums. According to the Doctrine of Original Sin, those who die unbaptized cannot ever ascend to heaven. This seemed pretty unfair to Mary and John who brought up the case of infants and young children unable to sin and good pre-Christians who never had a chance to be baptized. This fresco depicts them putting their case to Jesus. The result may have been the invention of the state of limbo which is a far cry from hell and a pretty decent place as depicted in Dante's Inferno where Ovid, Homer, Aristotle and even the Muslim general Saladin reside in a pleasant rural environment. The concept was abolished by the Catholic Church in 2007 so presumably, they are all in Heaven now, but I'm not sure Saladin would want to be there. 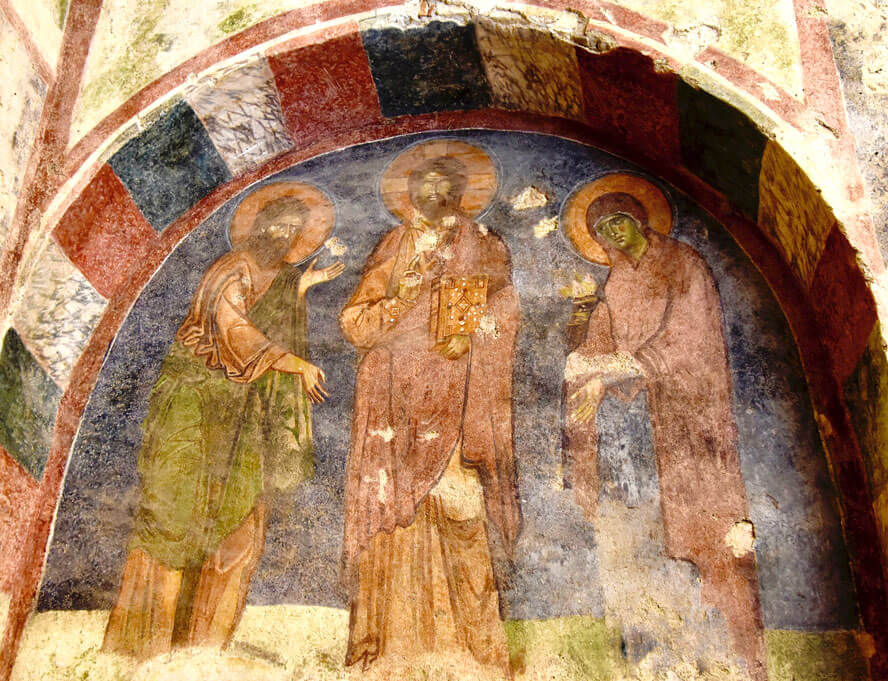 John the Baptist and Mary Praying for Lost Souls

This is a ceiling fresco showing the Apostles taking communion with Jesus which is pretty bizarre because the concept of communion only arose after Jesus' death and is meant to represent the flesh and blood of the Son of God. Jesus leading a communion is a religious oxymoron, but who am I to bring that up? 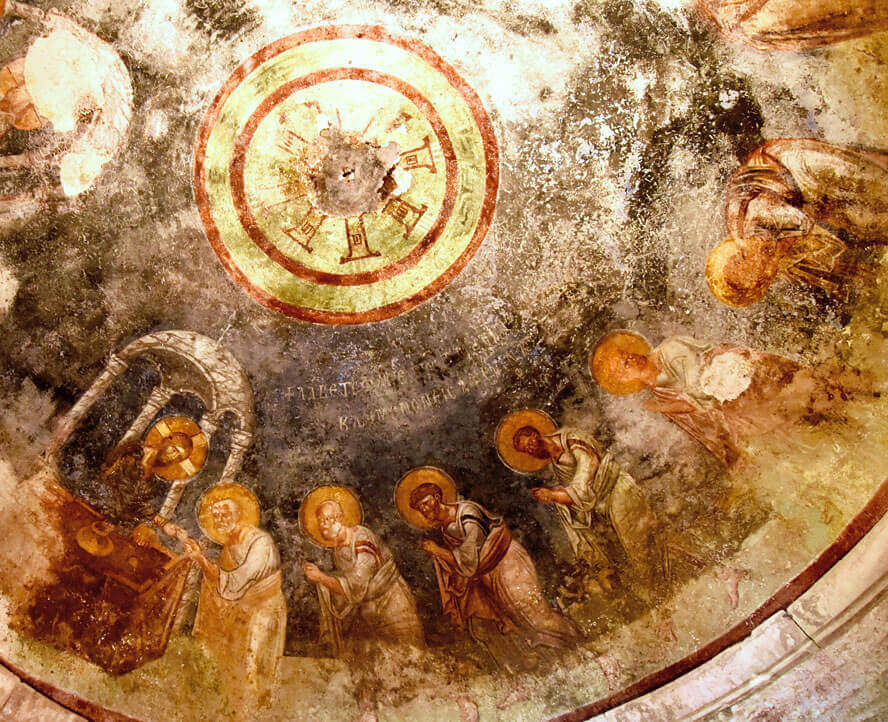 The Apostles Taking Communion with Jesus

The frescoes in the Church of St. Nicholas at Myra are not confined to Biblical matters with several such as this one depicting actual Ecumenical Councils with identifiable historic figures. One of the greatest controversies surrounding St. Nicholas is whether or not he attended the First Council of Nicaea which produced the Nicene Creed. This is the foundational document of mainstream Christianity. Some versions have St. Nicholas not only signing the document but personally assaulting one of the supporters of Arianism which denied the divinity of Jesus. The only problem with this is that the attendees at the great Council are fairly well documented and St. Nick is not on the list.

As you can see from this fresco these councils were serious business with no room for smiling or laughter. John Calvin and John Knox would have felt right at home in this group. 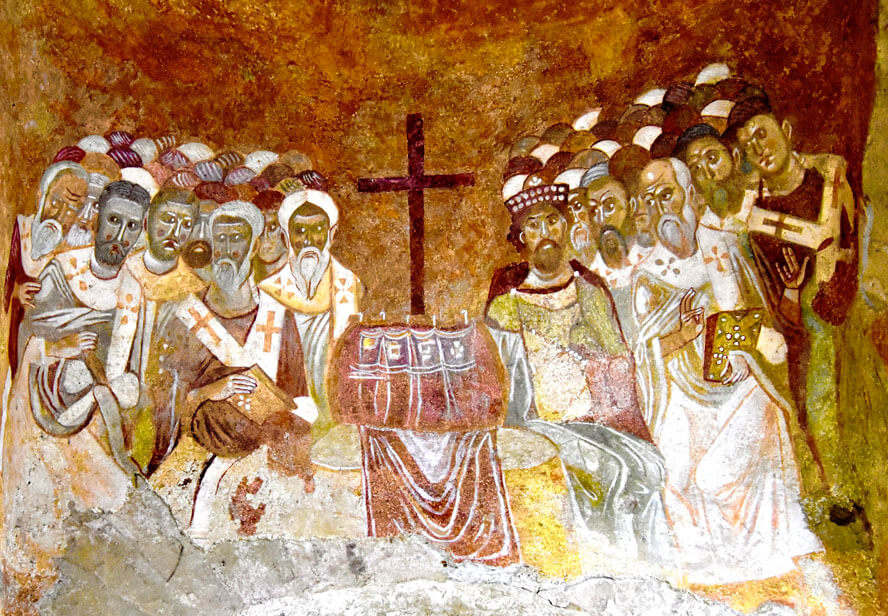 That concludes our quick visit to the sites of the city of Myra. From here we will continue toward Antalya stopping at one of my favourite archaeological sites in Turkey, the forested ruins of Phaselis. Please join us there.