In his latest blog post, Dale Dunlop, The Maritime Explorer, is on the final leg of his French Polynesian adventure. His last port of call is Rangiroa - Black Pearl Paradise. If you are interested in what Adventures Abroad has to offer, please check out our Small Group Tours to French Polynesia.

In the last post from this Adventures Abroad tour of French Polynesia, we made our final stop in the Marquesas Islands at the stunning Hanavave Bay (aka Bay of Virgins) on Fatu Hiva. The Aranui 5 then set sail for our final destination on this cruise before returning to Tahiti. After more than 24 hours at sea, we are now approaching Rangiroa, the second largest atoll on earth and a centre of the black pearl industry in French Polynesia. Please join us as we visit a pearl farm, relax on the beach and enjoy a great meal on shore.

In a number of previous posts, I have emphasized the tremendous distances between the various archipelagos that make up French Polynesia. That becomes apparent once again in our crossing from the Marquesas Islands to the Tuamotu Archipelago. It is 1,096 km (681 miles) from Fatu Hiva to Rangiroa. After the second night at sea, we approach the entrance to what is the second-largest atoll in the Pacific. It is actually a collection of over four hundred individual motus or islets that make up the large circular atoll. As at Kauehi, the first atoll we visited on this voyage in what seems like ages ago, the entrance to the lagoon is quite narrow and requires careful navigation.

The Aranui 5 passes through without any problems, not that I expected any. 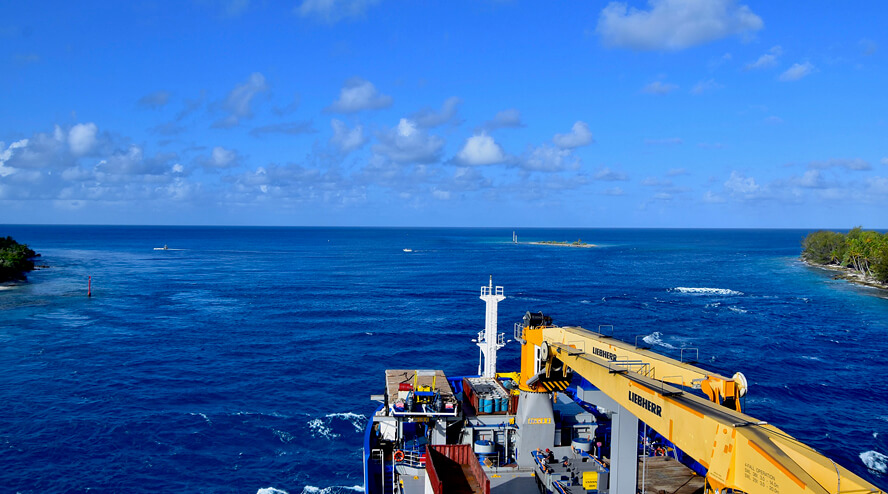 Only a few of these motus are inhabited and we are headed for Avatoru where most of the 2,500 residents of Rangiroa are found along with the tourism infrastructure that is now one of the main drivers of the local economy. Rangiroa is a major scuba diving destination as large numbers of sharks, manta rays, dolphins, turtles and other marine life congregate around the many channels that lead into the interior lagoon. 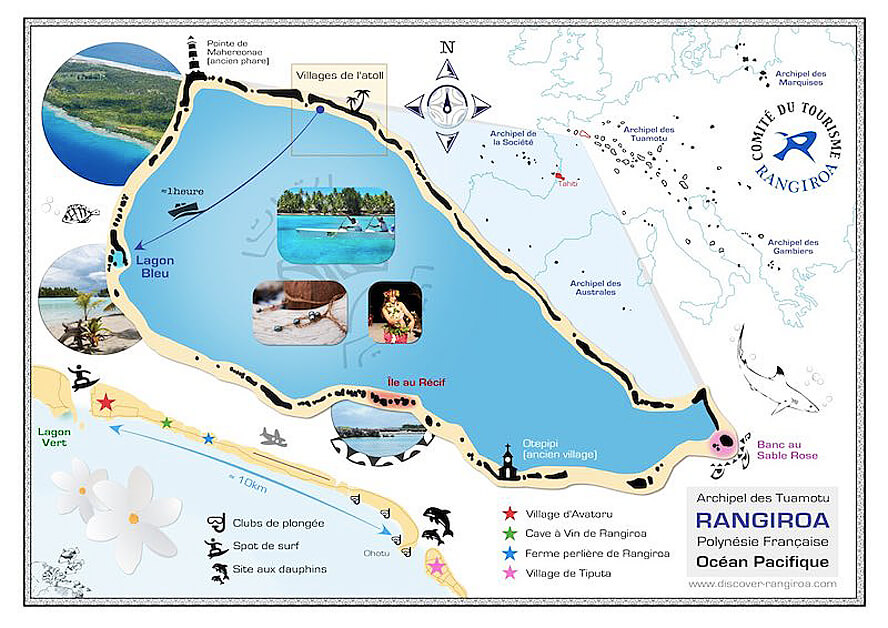 Given the shallow water in these atoll lagoons, we anchor well off shore and the barges are lowered for what will be the last time. 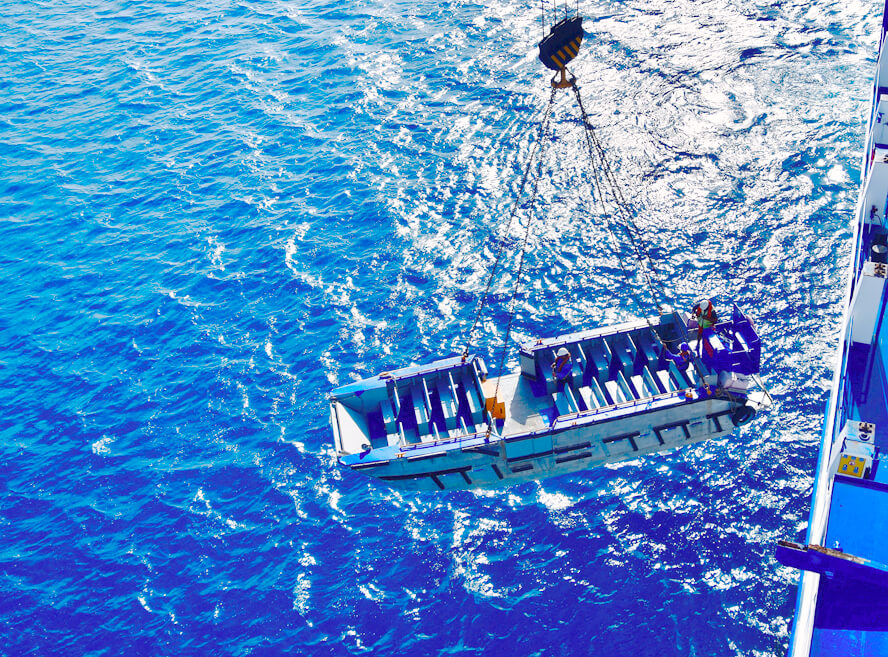 Unlike in the Marquesas where there was always some activity planned, on Rangiroa we are here just to relax on the beach and do some snorkelling, swimming and beachcombing. There is the option of taking a free bus to visit a black pearl farm and the possibility of visiting a nearby resort for lunch. Alison and I have no definite plans and start by just enjoying the warm water and dreaming about chartering that yacht out there. It is the Sea Hawk which you can have for only $250,000 USD a week, plus expenses of course.

Rangiroa is only a couple of hundred yards wide from the lagoon side to the open ocean side with a road running down the middle. After the swim, we go for a long walk on the lagoon beach and then cross over and return on the ocean side which is a lot rougher than the lagoon and not suitable for swimming. But it's still pretty damn nice. 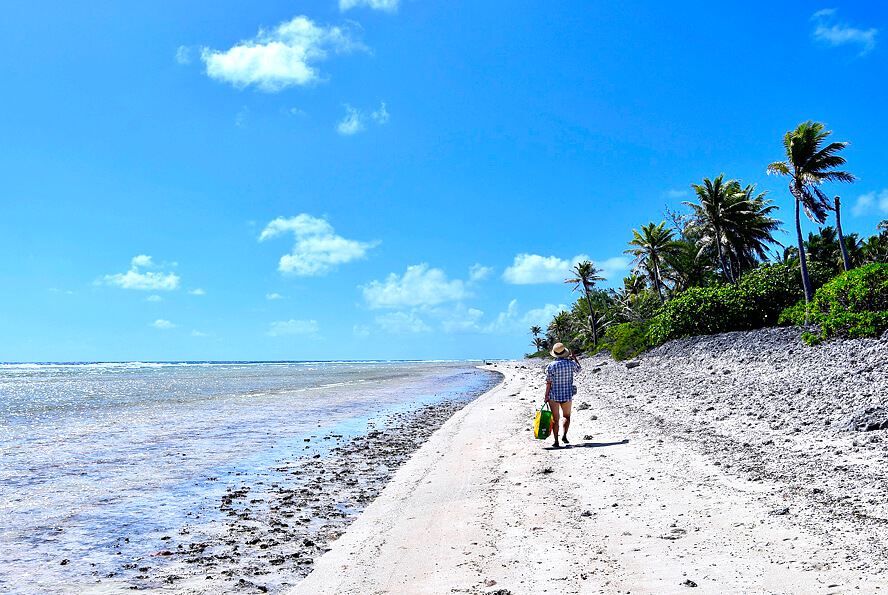 Walking the Ocean Side Beach

After returning to the landing spot there is a small bus in the parking lot that we can take to the Gauguin Pearl Farm for a demonstration as to how black pearls are farmed on Rangiroa. Why not?

It's an interesting ride that goes past the airport which does have regular service by Air Tahiti. If you click on the link there is a compelling list of reasons to come to Rangiroa for a vacation.

The pearl farm is pretty laid back and there are no restrictions about where you can go. The tour starts with a comprehensive explanation on the multiple steps necessary to produce a quality cultured black pearl.

Natural black pearls first became prized centuries ago because of their extreme rarity and unique variety of colours with true black being the most sought after. There is only one oyster variety in the world that produces black pearls, the black lip oyster and that was found most commonly in the atolls of the Tuamotu Archipelago. Before a Japanese scientist invented the Mikimoto technique in 1893 for creating oysters using in effect a type of artificial insemination, the black-lipped oysters were headed for extinction.

The ability to artificially grow pearls saved the black pearl industry on Rangiroa and at the same time dramatically reduced the price of them. Where once only the very rich could afford black pearls, they are now found in jewelry stores around the world. In fact, they are French Polynesia's largest export. 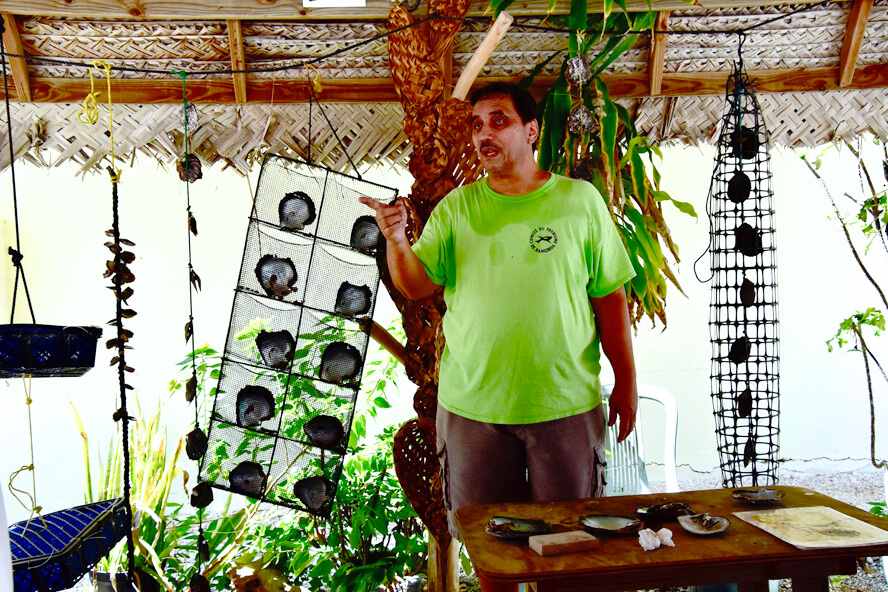 Explaining how Black Pearls are Made

I won't repeat much of what we were told about the many stages a pearl must go through to become a quality jewelry piece other than to say it takes years and years and almost all the pearls created are duds.

After the lecture, I wandered out to an area where the oyster shuckers were at work. From what I saw, they could easily have competed in one of the oyster shucking contests held in many parts of North America, including Prince Edward Island in Canada. The only difference is that the black oysters are not for eating. 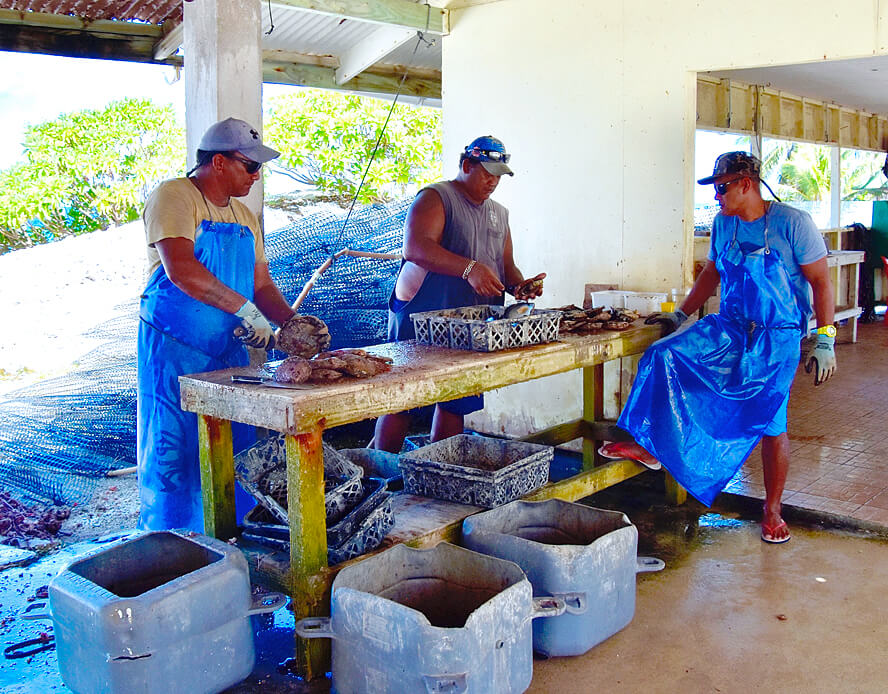 After being shucked the oyster shells are stacked into these mounds. I'm not sure if they have a secondary use or not. 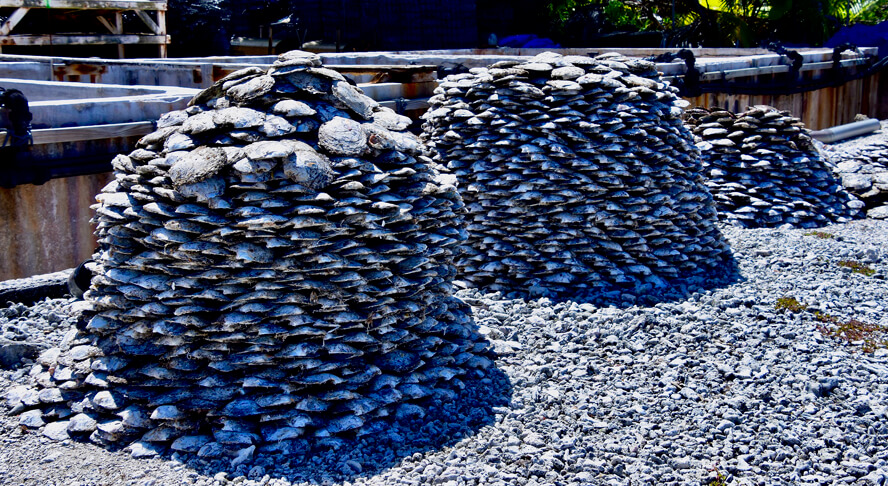 I took a final stroll around the oyster farm, noting this great crested tern resting on a dilapidated wharf. 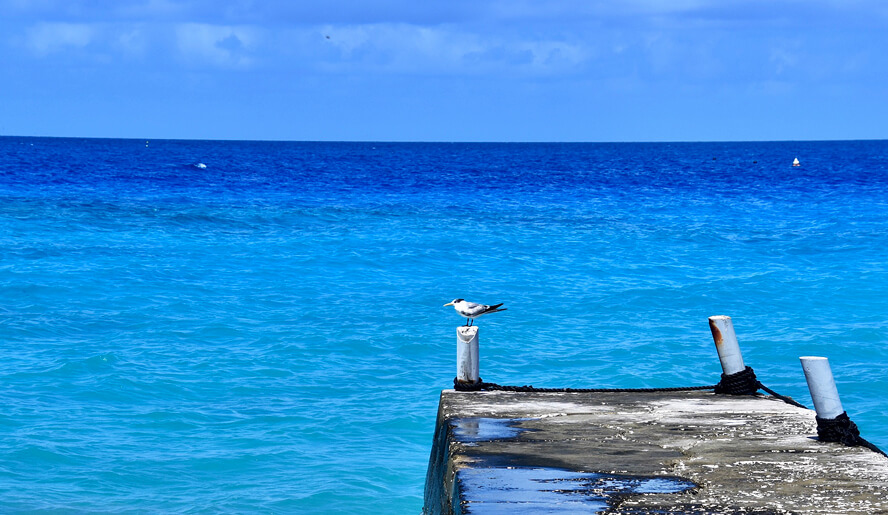 Returning to the landing spot, we had the choice of returning to the Aranui 5 and having lunch aboard or walking to a resort that we could spot from the beach that was about half a kilometre away. The only problem is that we didn't know if it was an all-inclusive that did not permit non-resort guests or if it was open to the public. The guides who were on shore were divided on this. Some thought yes and some no.

There was some construction going on between us and the resort so we had to take the road and not the beach. I am pleased to report that the Mai Tai Rangiroa is indeed open to the public and that we received a warm welcome. I did not know it at the time, but this is a sister resort to the one we would be staying at in Bora Bora. It is locally owned and has a wonderful location only a short distance from the main village on Rangiroa.

The beer was super cold and this baby octopus and shrimp salad was among the best things I had in all of French Polynesia. 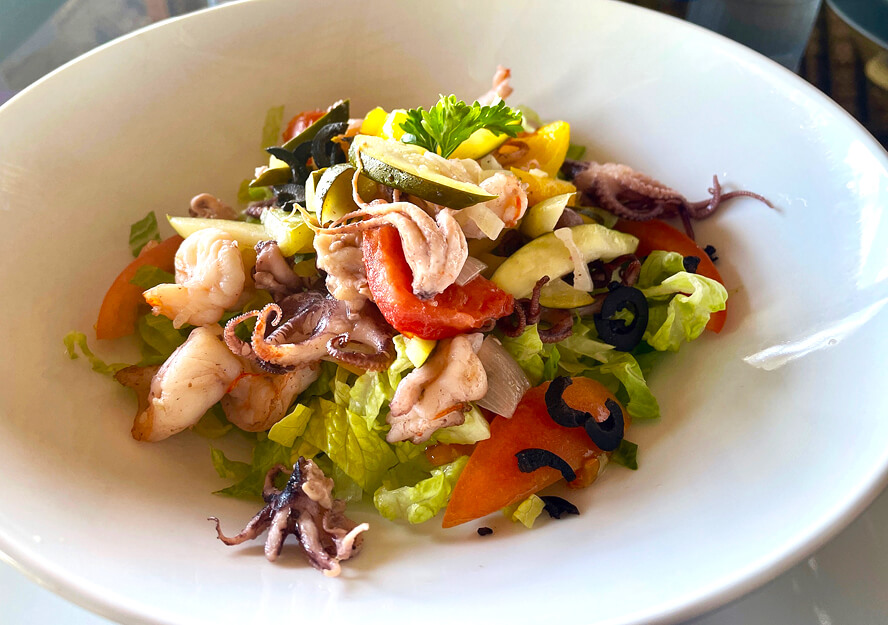 When we returned to the landing area and then the boat, those who had opted not to go to the Mai Tai were quite disappointed, so if you are doing this trip in the future make sure you have lunch here.

Our visit to Rangiroa was all too short as was this entire voyage.

After pulling anchor in the late afternoon we set sail for Tahiti. There was a final happy hour and farewell dinner. If not for the fact that we would be flying to Bora Bora the next day to continue this amazing trip, I think I would have been very sad about leaving the Aranui 5 which had been our home for almost two weeks. As it was, I will always have incredible memories, some of which I hope I have captured in these posts, of this once-in-a-lifetime voyage.

Please join us in the final few posts when we visit the fabulous island of Bora Bora.