In his latest blog post, Dale Dunlop, The Maritime Explorer, visits two islands on his French Polynesian tour, Hiva Oa, stopping in at Puamau, I’lpona Marae, and Tahuata. If you are interested in what Adventures Abroad has to offer, please check out our Small Group Tours.

In the last post from this Adventures Abroad tour of French Polynesia, we arrived on the South Marquesas Island of Hiva Oa where we visited the graves of Paul Gauguin and Jacques Brel in the town of Atuona. In this post, we weigh anchor and cruise to the farther end of Hiva Oa and the village of Puamau outside of which is the most important archaeological site in the Marquesas, the marae of I'lpona. After that, we will cross the short distance to the island of Tahuata for a brief visit. Please join us. 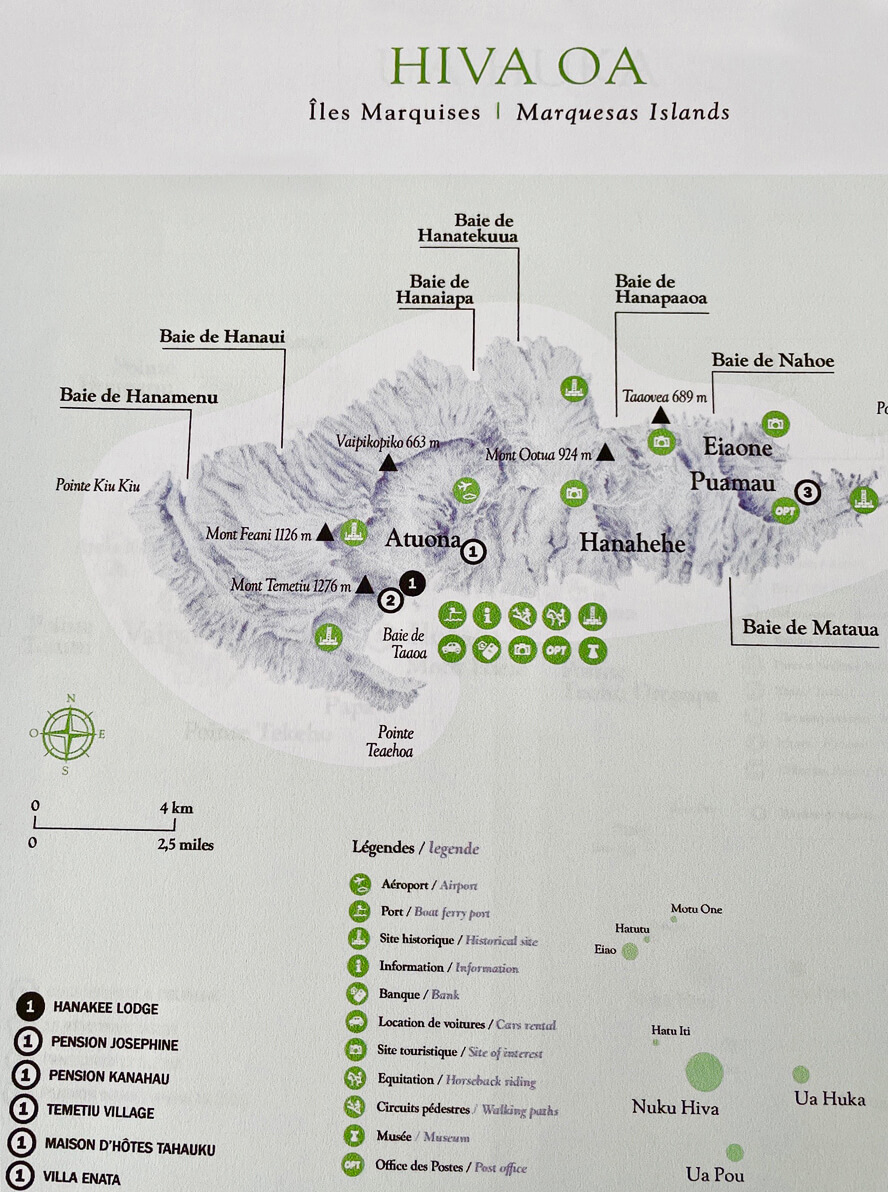 This is a map of Hiva Oa with Puamau tucked away in a small bay on the eastern side of the island. The Aranui 5 weighs anchor and we motor along the south coast of the island until rounding the cape and the eastern tip.

Rounding the Cape on Hiva Oa

This is the entrance to Puamau Bay which has no pier capable of docking the ship so we moor in the bay and take the barges to shore, a routine that is quite familiar by now. Note the passengers on the bridge in the upper right. This was a preferred spot to be each time we were approaching a new island. 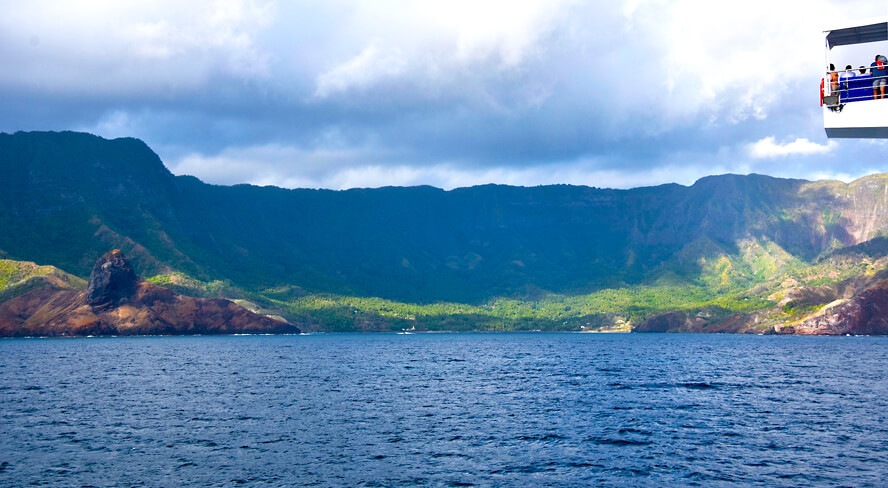 This is a view of the church and cemetery at Puamau taken from the barge.

This is the view from shore with the rugged volcanic terrain of Hiva Oa on display. 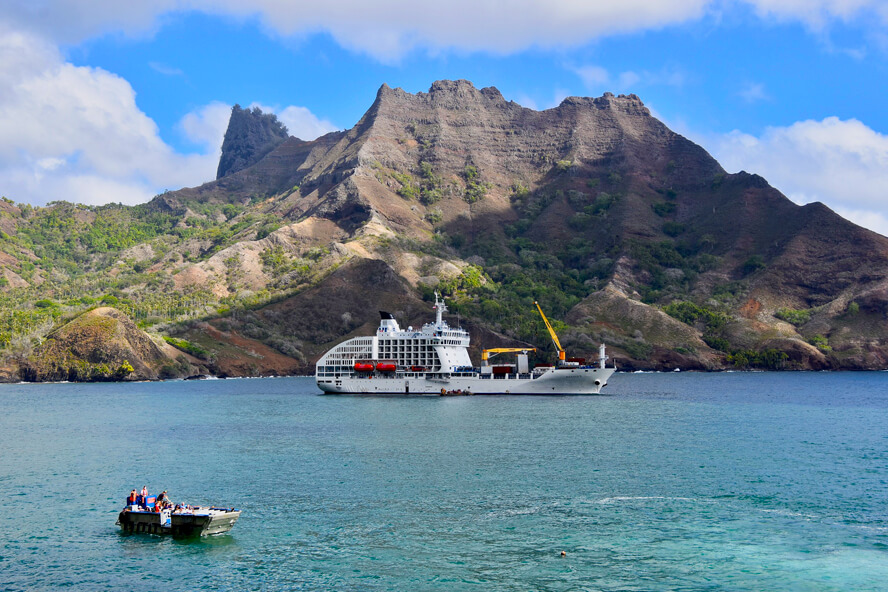 Aranui 5 and Barge in Puamau Bay 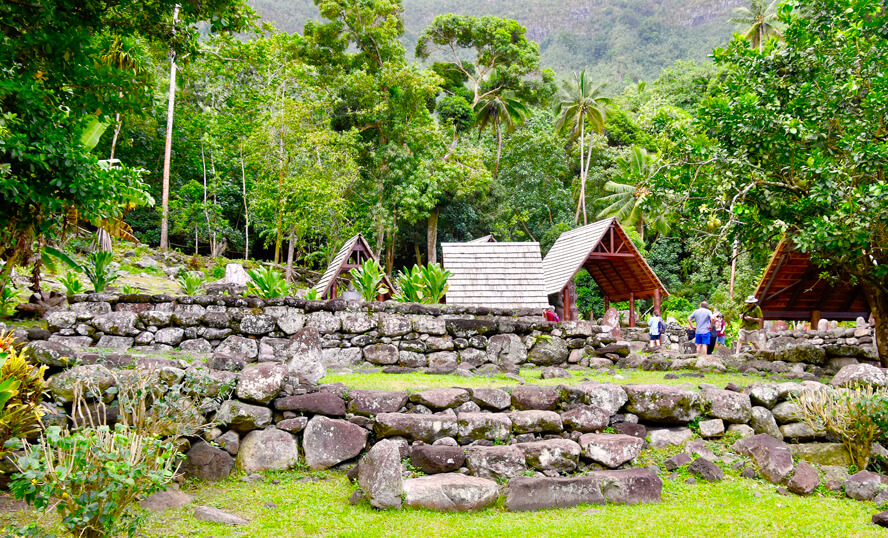 From Puamau we were transported a short distance to the archaeological marae of I'lpona, the largest and most important in all of French Polynesia. Our guide from the Aranui 5, a Marquesan himself, explained the significance of this sacred site. Those are members of the Adventures Abroad group listening intently. 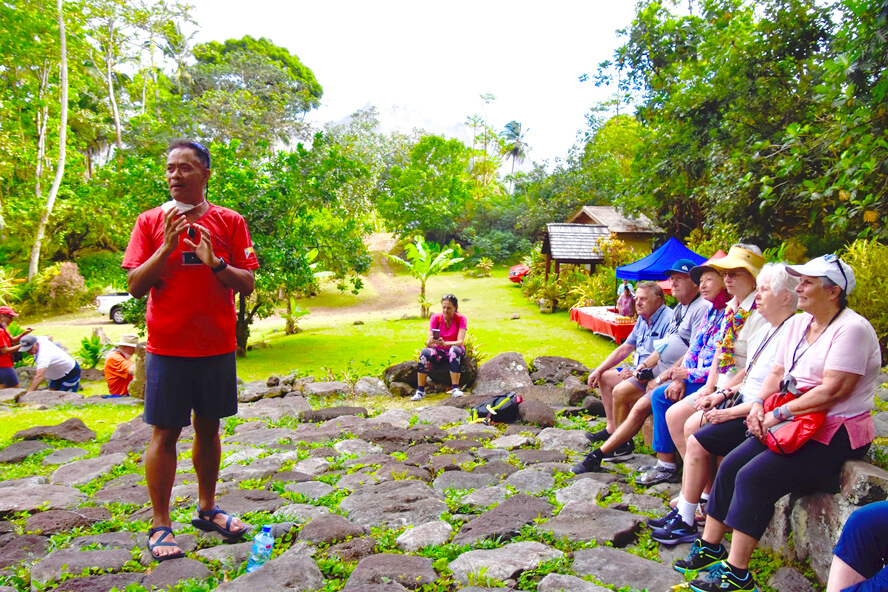 At least three times he made it clear that certain parts of the marae were off limits and not to climb onto one particular ceremonial platform. So naturally, the first thing one of the French women on the tour did was just that to the great displeasure of the guides as they believe that if one person in the group brings on bad karma it will affect the entire group. I'll just have to hope our barge doesn't sink on the way back to the ship. 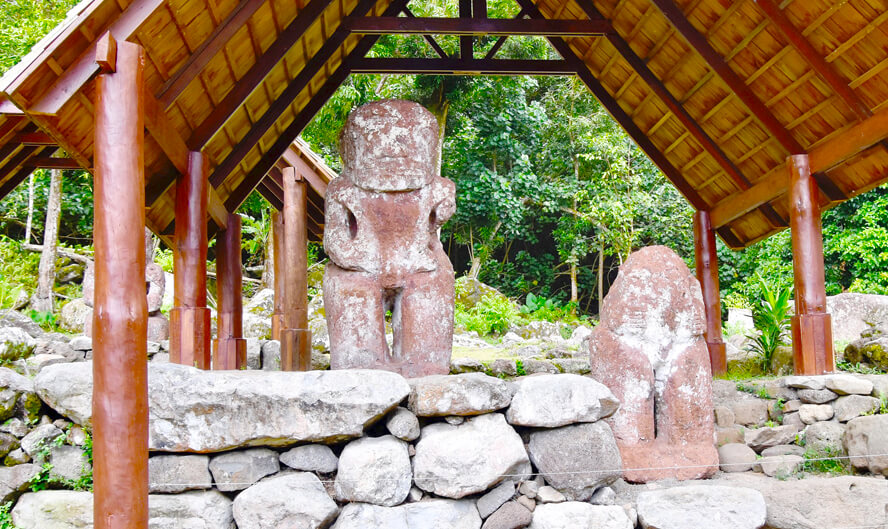 There really is no consensus on who is supposed to be depicted by these tikis. Many scholars agree that this strange one represents a female figure, possibly a queen, but others aren't so sure. That's one of the tragedies of the Marquesan islanders. When the Europeans arrived, aside from the diseases that killed off over 90% of the population, the missionary zealots did all they could to destroy the 'paganism' of the islanders. They were successful enough that the Marquesans no longer have the oral traditions that many other groups that did not have a written language have been able to preserve. So if you are one who seeks pat answers about the origins and meaning of much of what you will see at I'lpona, you will be disappointed. 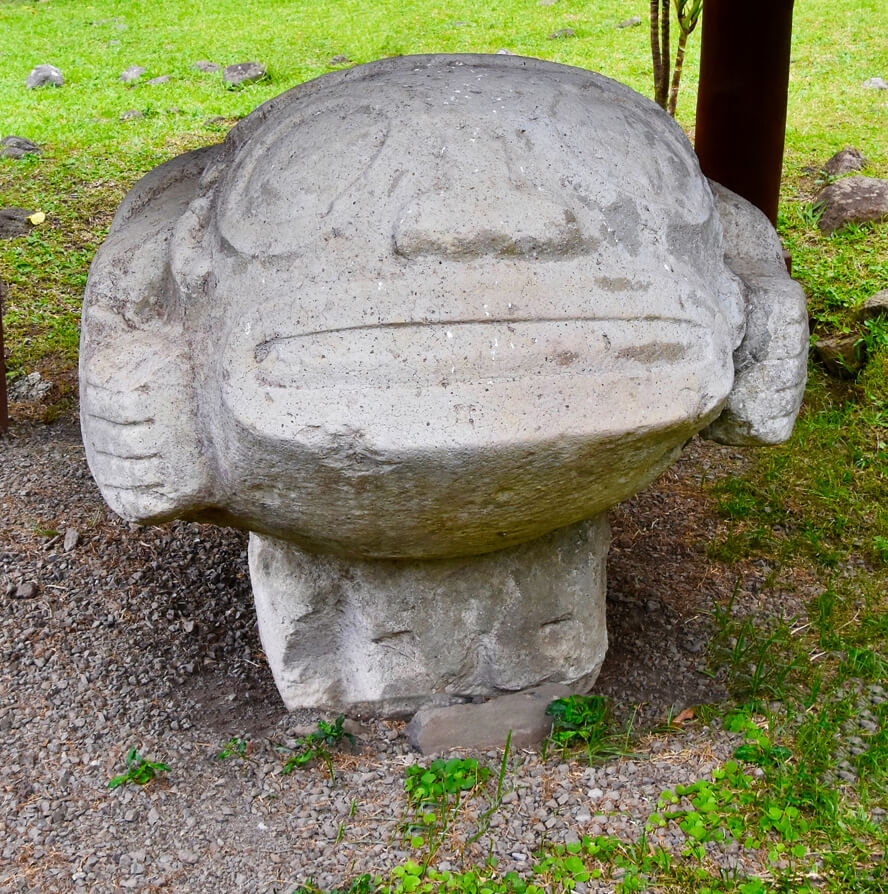 This tiki clearly has a replacement head as the guide readily acknowledged, but had no idea why the original head was replaced or by who. He's also been castrated, probably by the missionaries, but possibly by a warring tribe.

Tiki with the Wrong Head

One thing every scholar can agree upon is that this is a sacrificial altar similar to others we have seen in French Polynesia. There are numerous tales about who got sacrificed and eaten here. 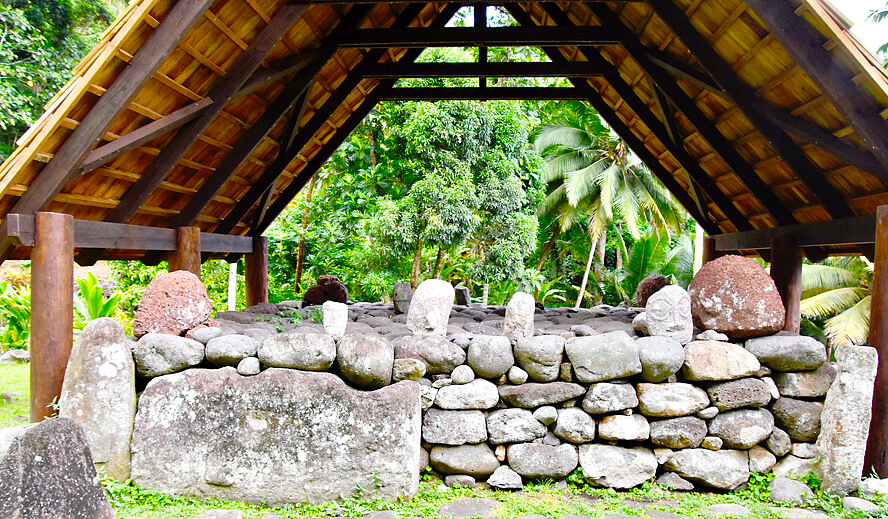 After our visit to I'lpona, we had the opportunity to walk back to Puamau which Alison and I jumped at. Walking the various islands of the Marquesans was among the most enjoyable parts of the trip. 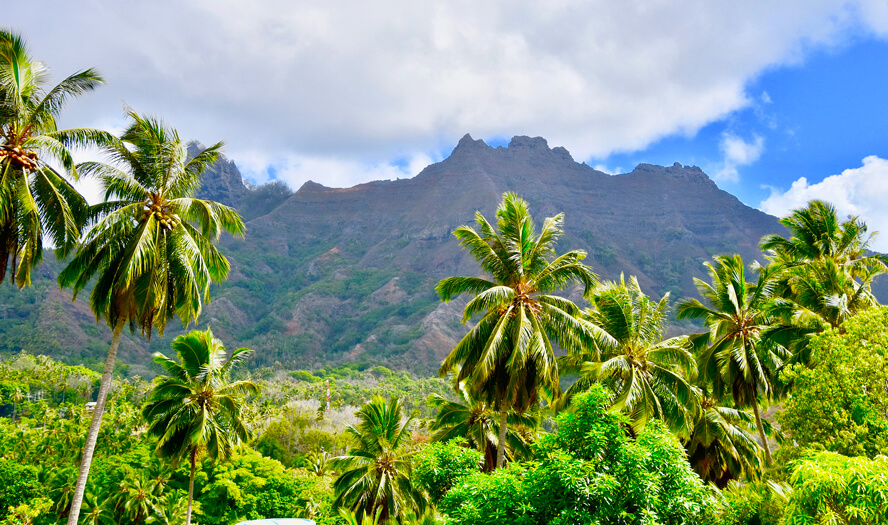 You never know who you are going to meet. 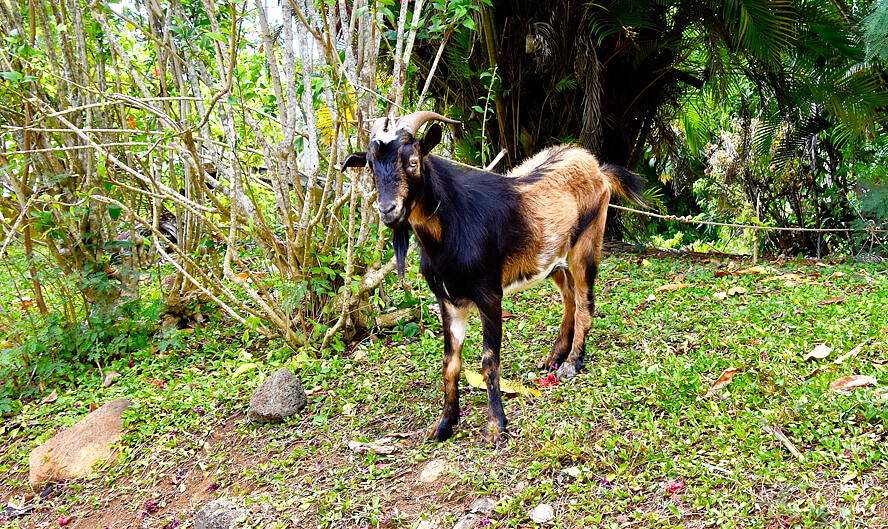 We returned to Puamau which really isn't much more than a few houses and the church which was quite modest. 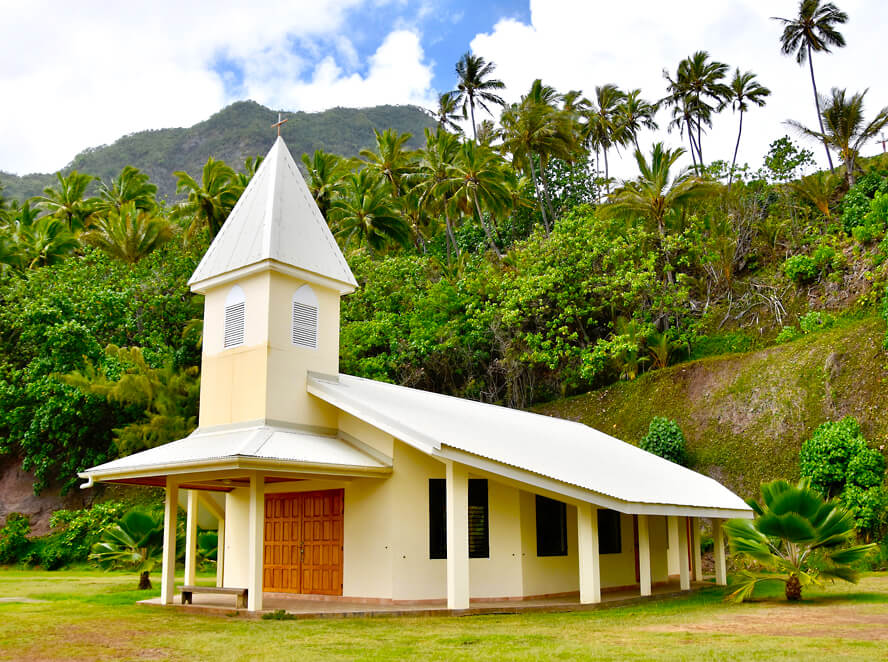 However, as usual, the interior displayed the typical fine woodwork.

In an earlier post, I noted that organs are replaced by drums in Marquesan churches. This was a good example of that. 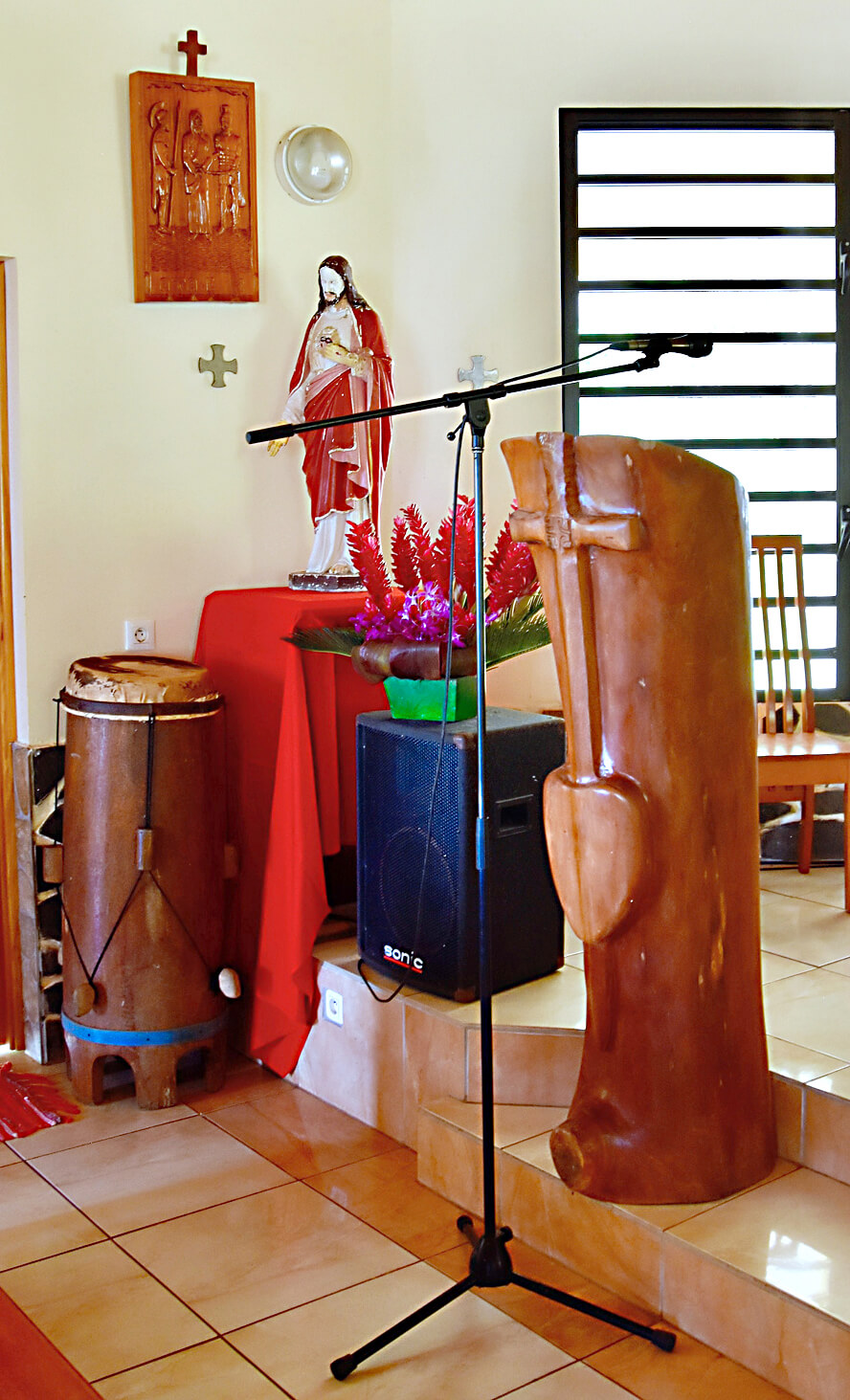 Returning to the wharf by way of Puamau Beach we had this view of the Aranui 5 moored just offshore. 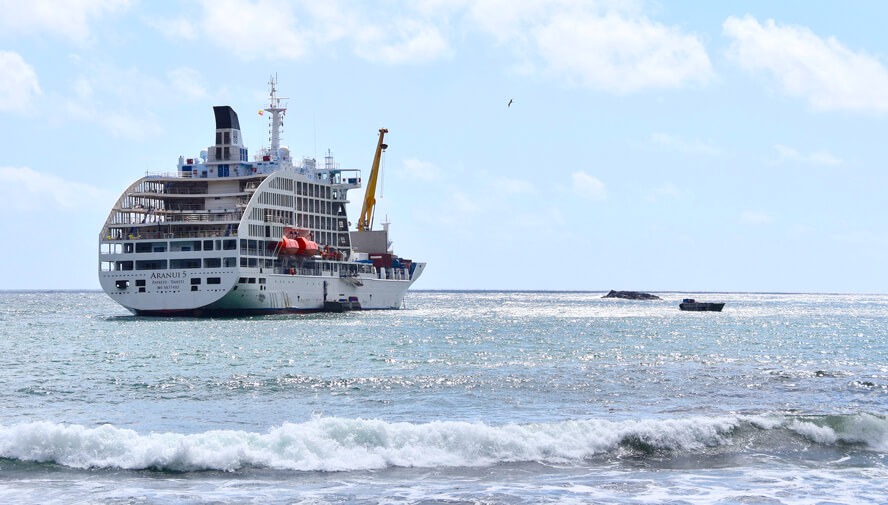 Back at the disembarkation point, there was the usual flurry of activity, in this case, the unloading of the oil drums that fuel the few vehicles of Puamau. 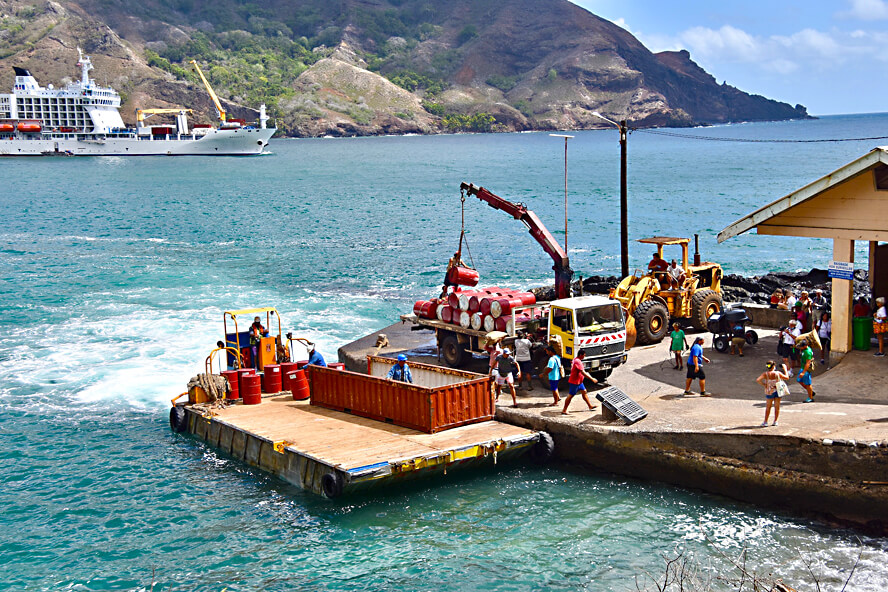 Once the incoming cargo was unloaded it was time to lade the copra sacks and this was a fascinating thing to watch as every able-bodied man on the wharf joined in and this young lad sat atop a steadily decreasing pile of copra. The music was perfect for this type of task.

We returned to the Aranui 5 saying goodbye to Puamau and the wonderful island of Hiva Oa headed for Tahuata. 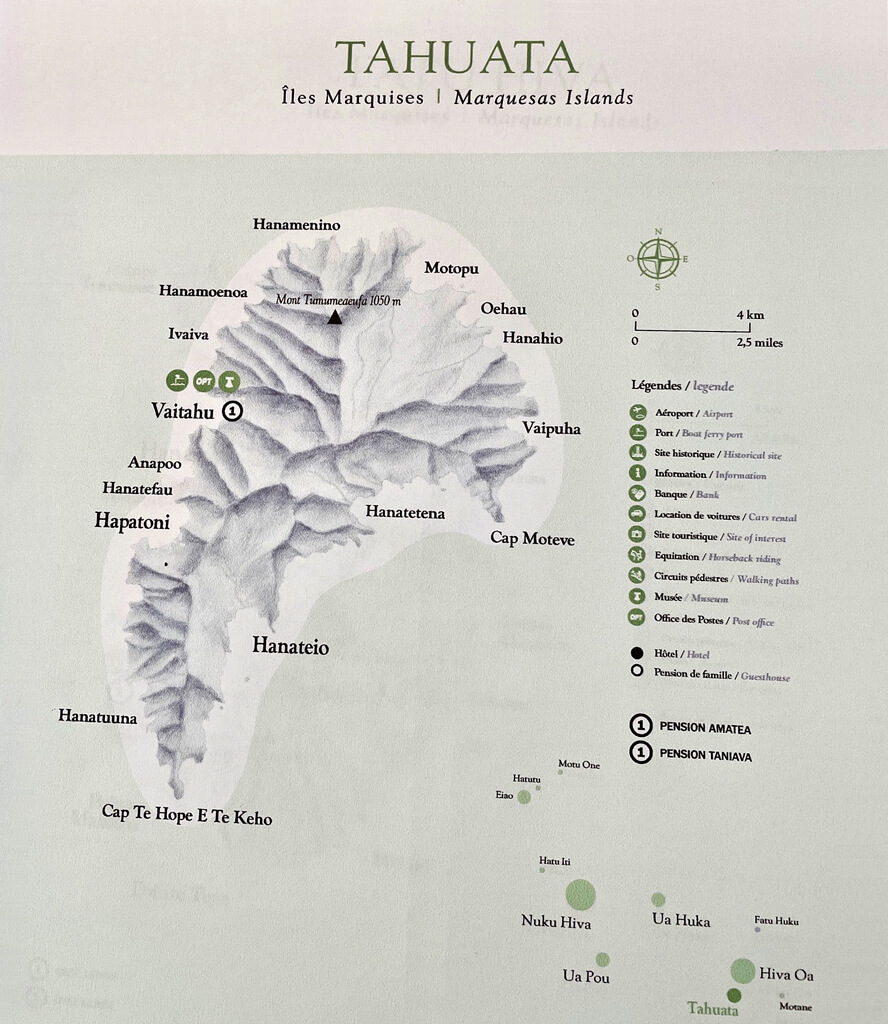 Tahuata was the smallest of the Marquesan Islands that we visited. It lies only 2.5 miles (4 km) from Hiva Oa across a channel the Marquesans call Ha'ava which is known for its choppy seas and high winds. Fortunately, neither was present this day and we moored in the harbour of Vaitahu without any issues and took the barges to shore where we had a few hours to check out the town.

Vaitahu dates back at least five hundred years as a settlement. It was here that the Spaniard Álvaro de Mendaña landed in 1595 and described a thriving village in his journal. It was also here on this beach that he killed over 200 islanders in one of the first violent clashes between western explorers and native Polynesians. 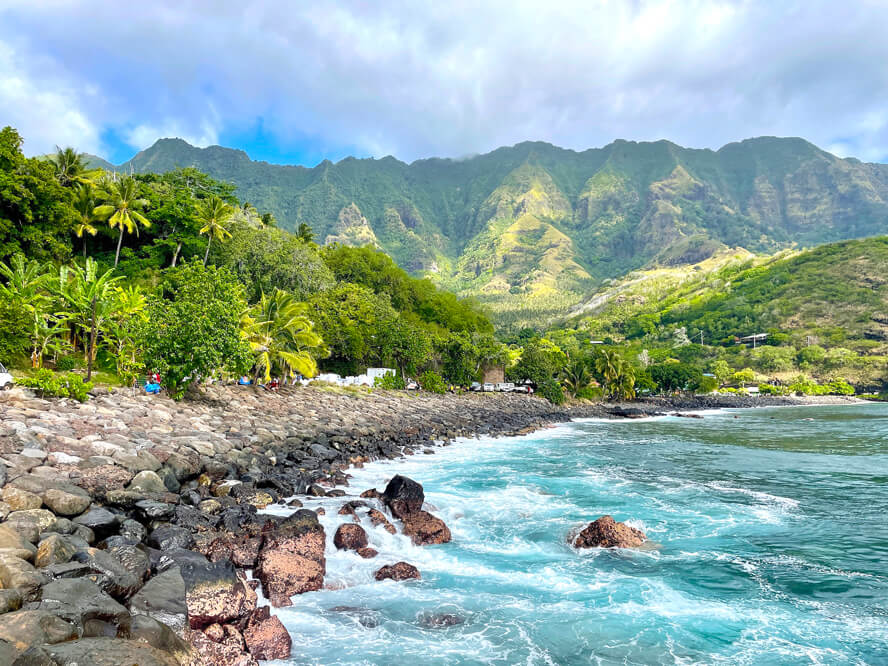 However, the Tahuatans were quite capable of inflicting violence on their own as Captain Cook noted when he visited in 1774. At one time there were four distinct tribes on the island, but an alliance between the two most powerful led to the literal extermination of the other two.

Today, Tahuata has just over 650 permanent residents and they are very glad to see some visitors at last as this completely tattooed fellow blowing a horn as we approach, attests. 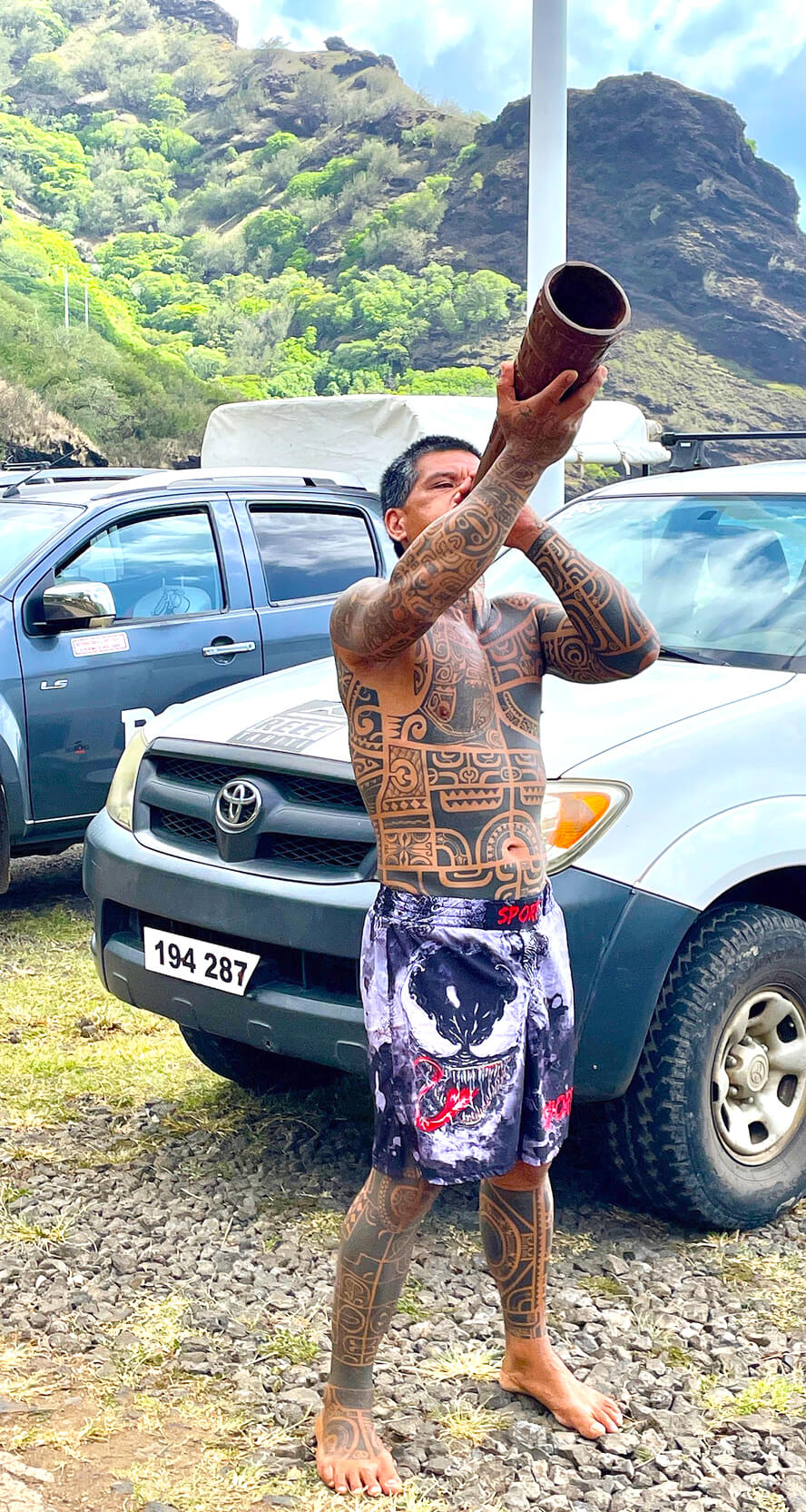 Truthfully there is not much to see in Vaitahu other than the church which is quite a size for such a small community. Opened only in 1988 and made almost entirely out of native stone and hardwood it was one of the nicest we visited in the Marquesas. 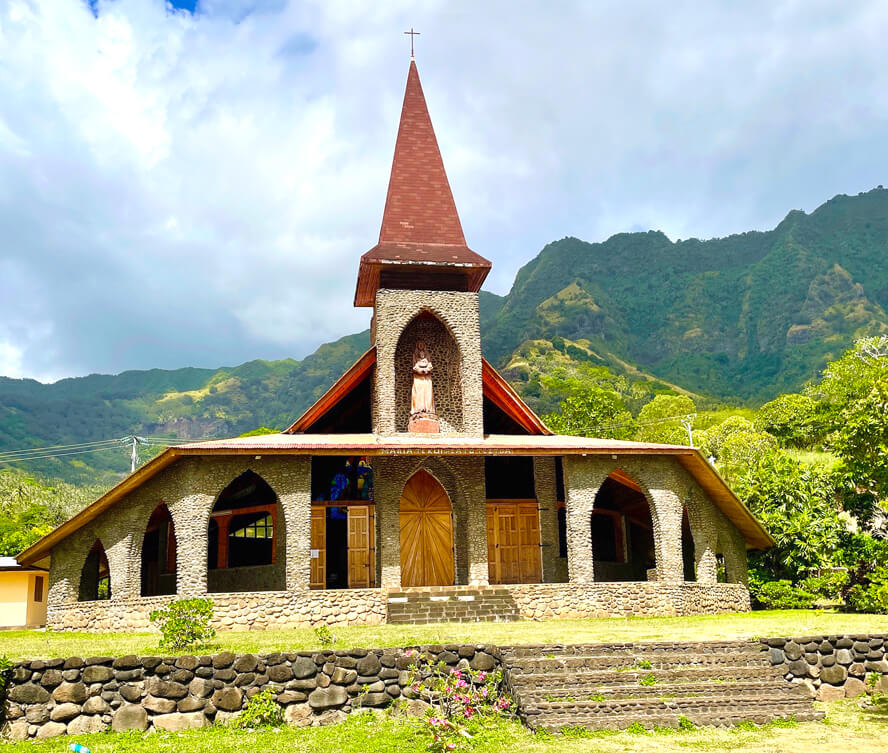 The interior was particularly impressive with one of the best-stained glass windows we saw anywhere in French Polynesia. 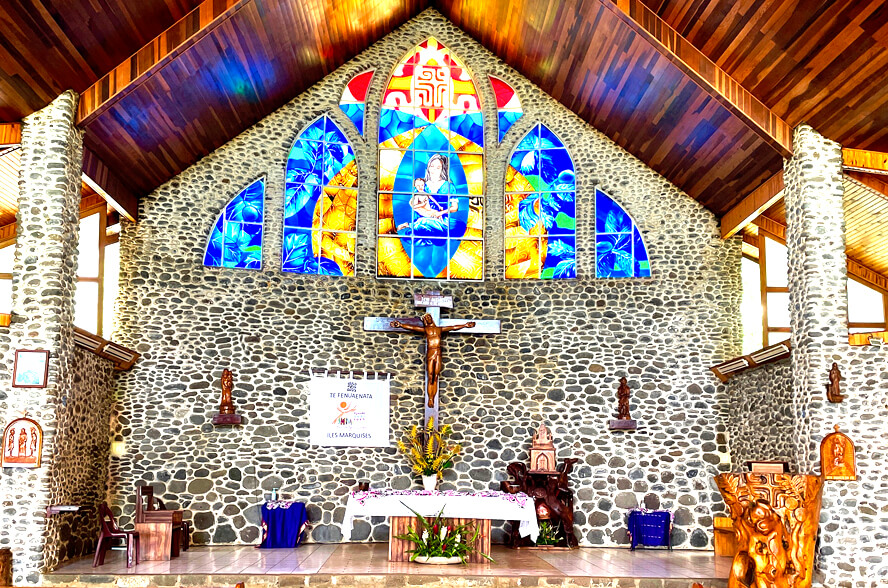 This is a close-up of the Virgin and Child which is the centrepiece of the work and is quite compelling. 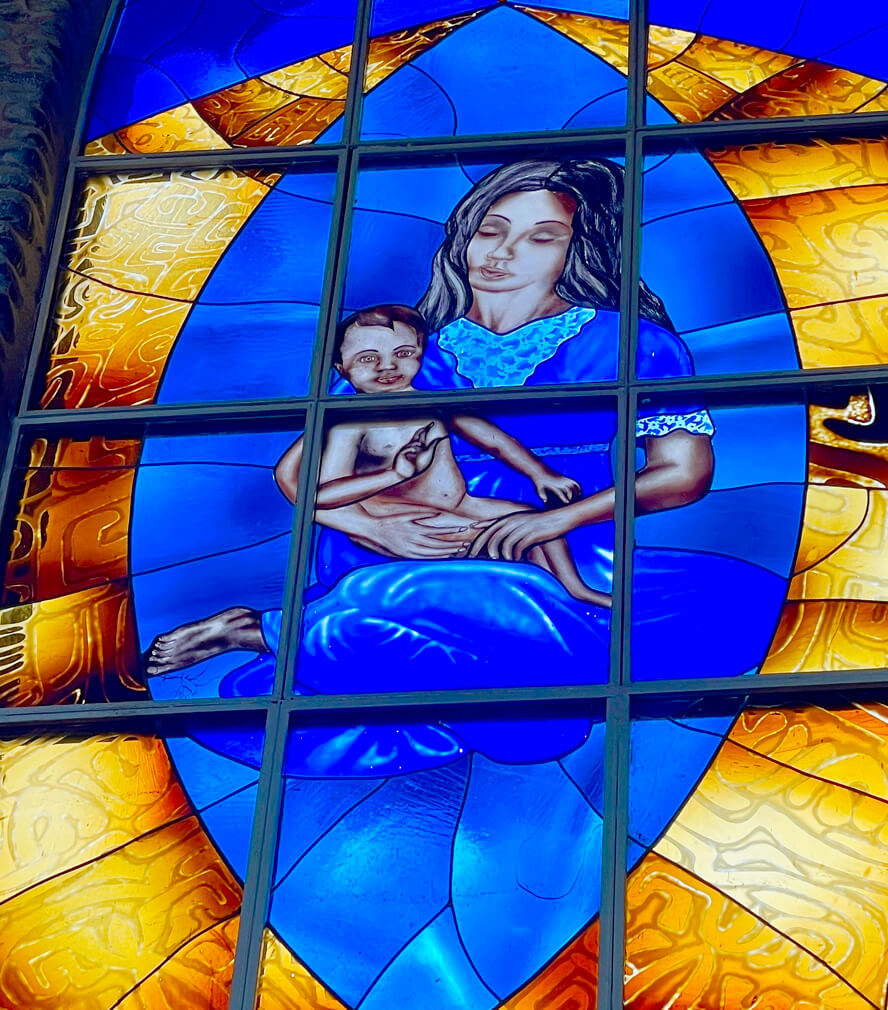 There were also some very fine wood carvings including what appeared to me to be some type of reliquary, but I could find no information to confirm this. 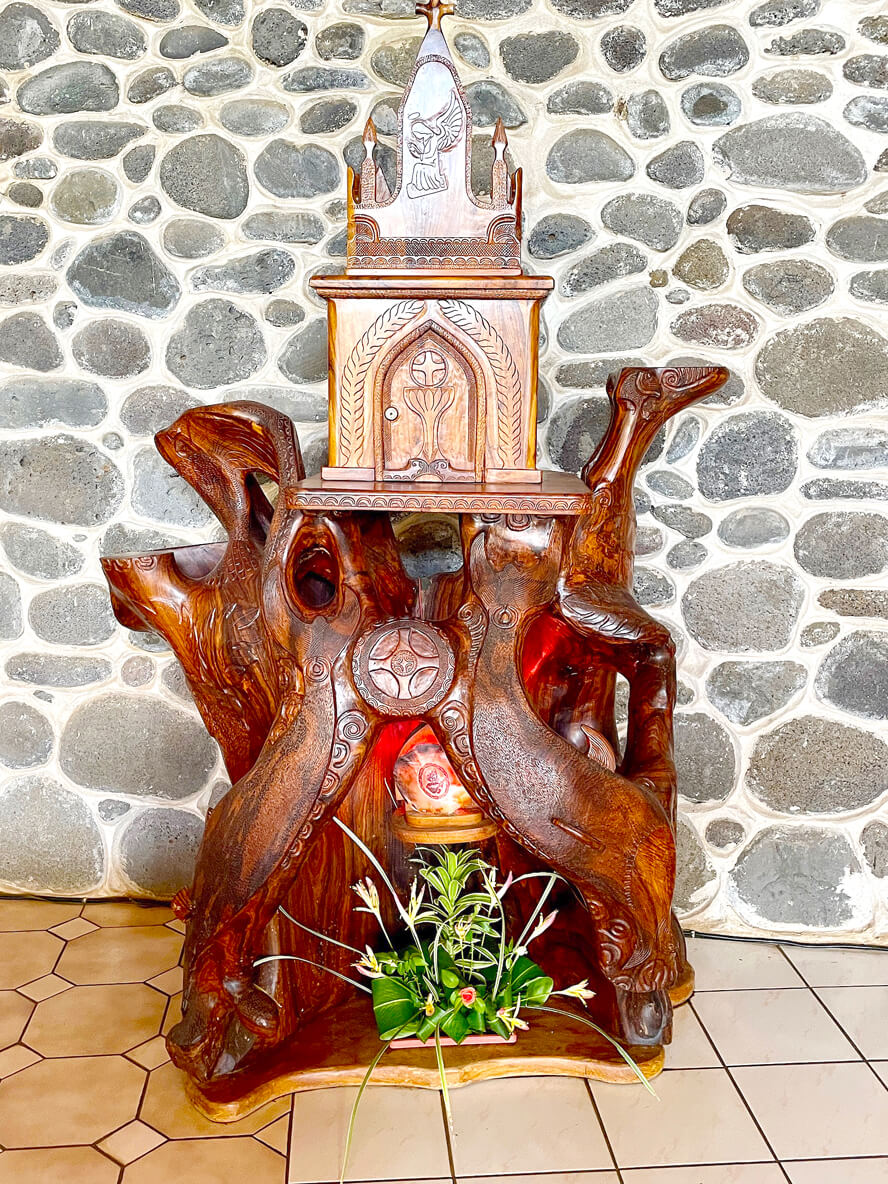 After touring the church Alison and I made our way to the one bar in Vaitahu, Chez Jimmy where I was looking forward to a cold Hinano. 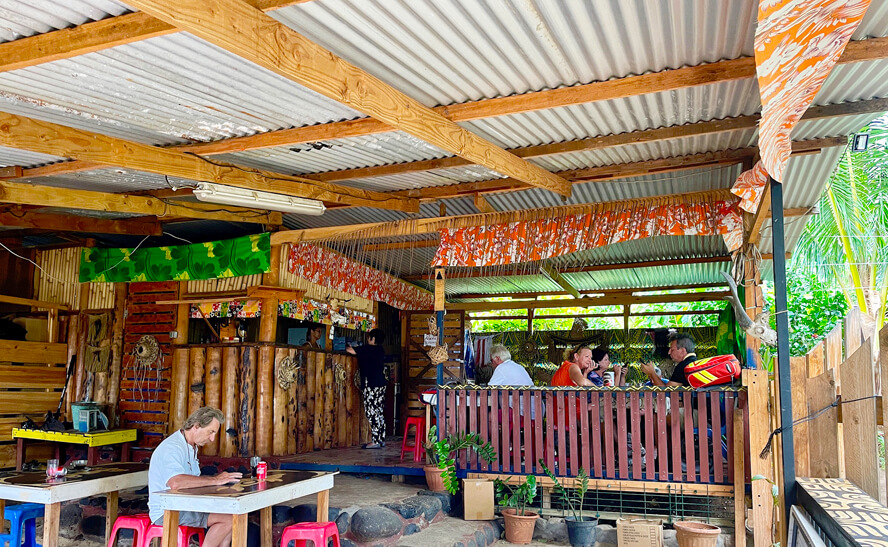 But no! It was election day in France – no booze for you, even if you are not a voter. Anyway, the homemade lemonade was very refreshing and we listened to one of the impromptu singalongs that seem to break out all over Polynesia. 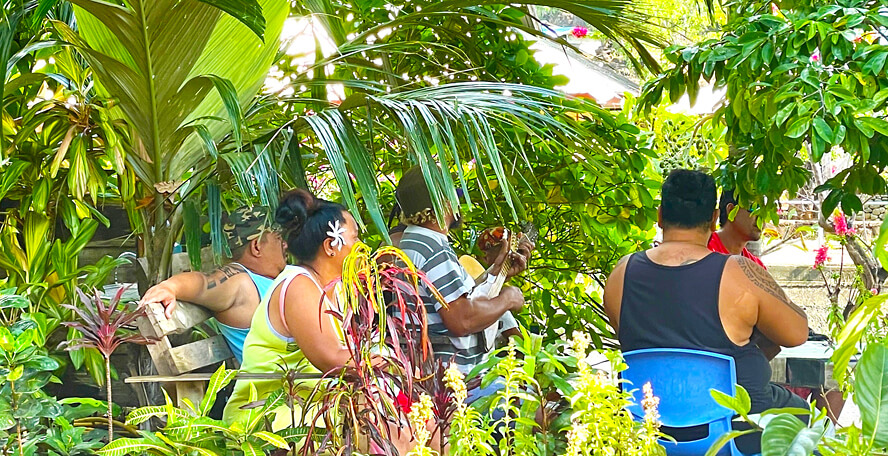 Heading back to the pier we witnessed the usual frenzy of loading and unloading that goes on at every stop. This one was quite intriguing because a couple of times the load was so heavy that the back wheels came off the ground and I was sure the front-end loader was going to flip, but it didn't. 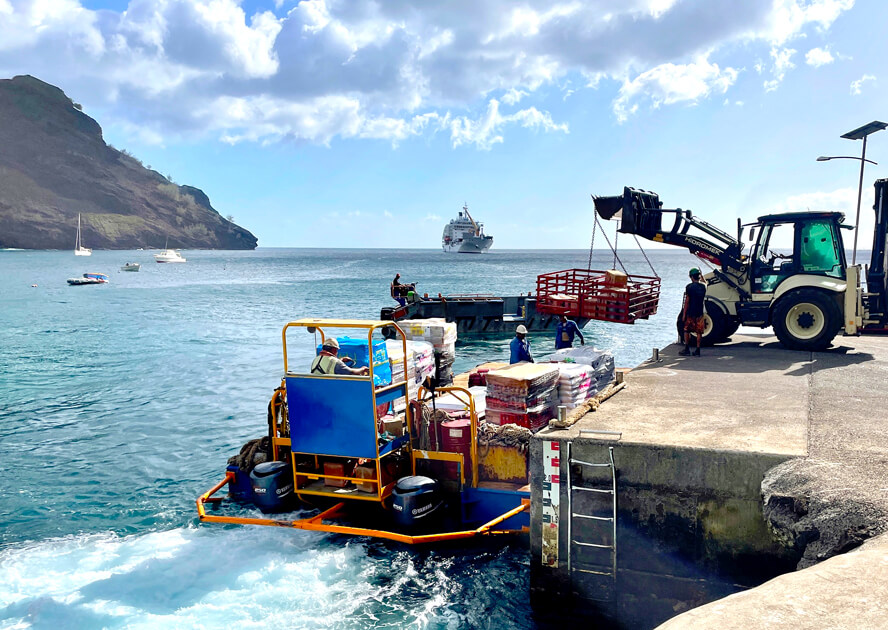 Alison was content just to relax in the tropical heat and wait for the next barge. 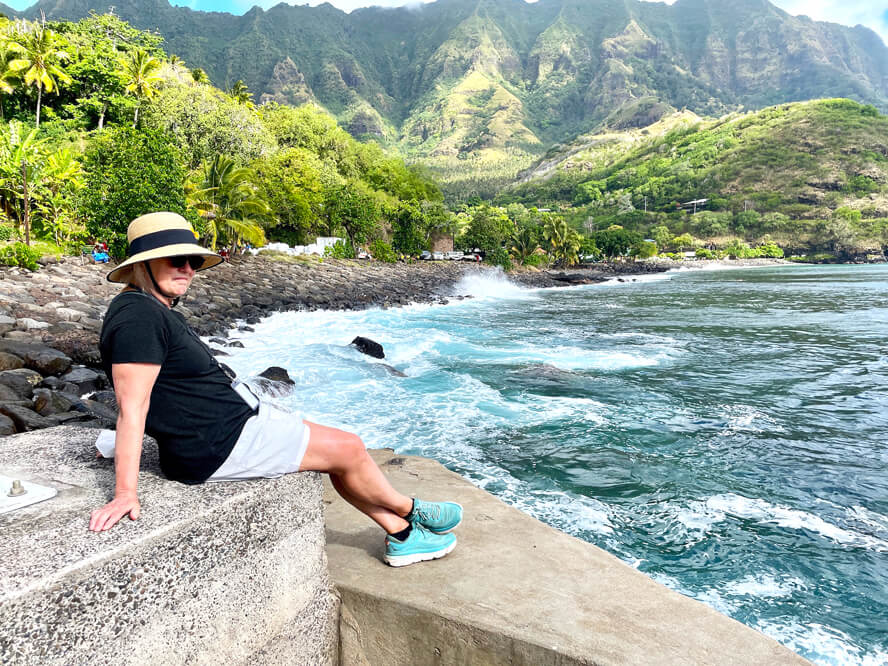 So we say goodbye to Puamau and Tahuata and head for our final Marquesan destination, Fatu Hiva where we will have a chance to undertake a 10 mile (16 km) hike. Let's see if we are up for it.