In his latest blog post, Dale Dunlop, The Maritime Explorer, actually goes deeper into Cappadocia, join him as he wanders down and around Derinkuyu Underground City. If you are interested in what Adventures Abroad has to offer, please check out our Small Group Tours.

In the last post, our Adventures Abroad, Western Turkey Tour visited Goreme Open Air Museum. This was a bit of a misnomer because most of what we saw was actually inside the churches that were carved out of the soft volcanic rock of Cappadocia. In this post, we will do the opposite of anything related to the open air as we descend deep into the bowels of the earth to visit the underground city of Derinkuyu. If you are not claustrophobic, please join us in exploring this most unusual Byzantine site.

Who Built Derinkuyu & Why?

It's much easier to answer the second part of the question than the first. Underground cities of which there were upwards of 200 in Cappadocia, were first and foremost always places of refuge. The earliest archaeological record goes back to at least 600 BCE with the Phrygians being the first to excavate the porous Cappadocian rock to shelter from we know not who. Derinkuyu and most of the other known underground cities date between 780 and 1180 which coincided with the four hundred year struggle between the invading Arabs and the defending Byzantines. It was the Orthodox Christians who created the underground cities, but we have no definitive information on any particular builders. It is no coincidence that once the Arab invasions were finally successfully resisted that the Christians came out of their hidey-holes and embarked upon the above  ground structures we saw at Goreme.

However, the cities were again put to use when the Mongol madman Timur (aka Tamerlane) rampaged through Anatolia in the 14th century. Even that was not the end for Derinkuyu and the other cities. After the Ottoman Turks successfully wrested Anatolia from the Byzantines, Christians often had to take refuge from periodic outbursts of anti-Christian Turkish rulers. Incredibly this lasted right up until the 20th century when massacres of Christians were still taking place. It finally ended with the great population exchange of 1923 when the Greeks were expelled from Turkey and the Turks from Greece. My brother-in-law's family was part of this exchange and to this day he refuses to visit Turkey even though his forebears lived here for hundreds if not thousands of years.

Most descriptions of Derinkuyu would have you believe that somehow the underground cities that had been an integral part of Cappadocia for many millennia were simply forgotten until rediscovered in 1963 by accident. I take this with a grain of salt.

Derinkuyu was by far the largest of the Cappadocian underground cities, capable of housing up to 20,000 people in what was essentially a human version of an ant colony. It was partially opened to the public in 1969.

Here is a map of Derinkuyu with the parts in yellow being open to the public. Note the ventilation shafts that ended at the aquifers that supplied water to the inhabitants. 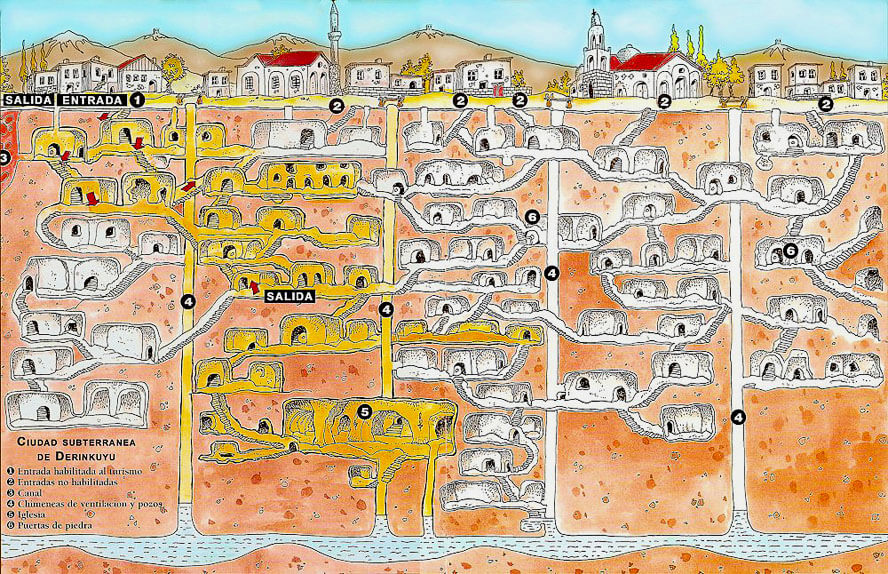 The tour of Derinkuyu for the most part follows a dedicated route indicated by red and blue arrows. Red means you are going down, apropos of a certain famous Christian hot spot, and blue means you are going up. There are a couple of places where you can cross over from red to blue if you've seen enough.

Our guide Yasemin is going to take those who want to follow all the way down to the lowest level which is basically a long, long way down. OK, let's do this. 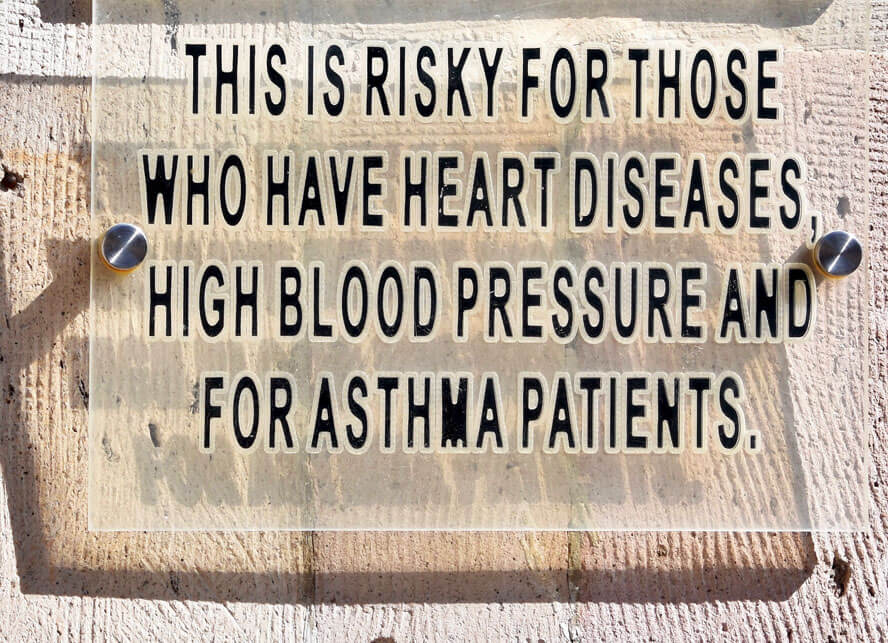 Well, not to be flippant, who the hell doesn't have one of these things by my age? I take solace by reading it as if you need all three conditions to worry. So let's soldier on.

This is the entrance to Derinkuyu which is in the upper left of the map. 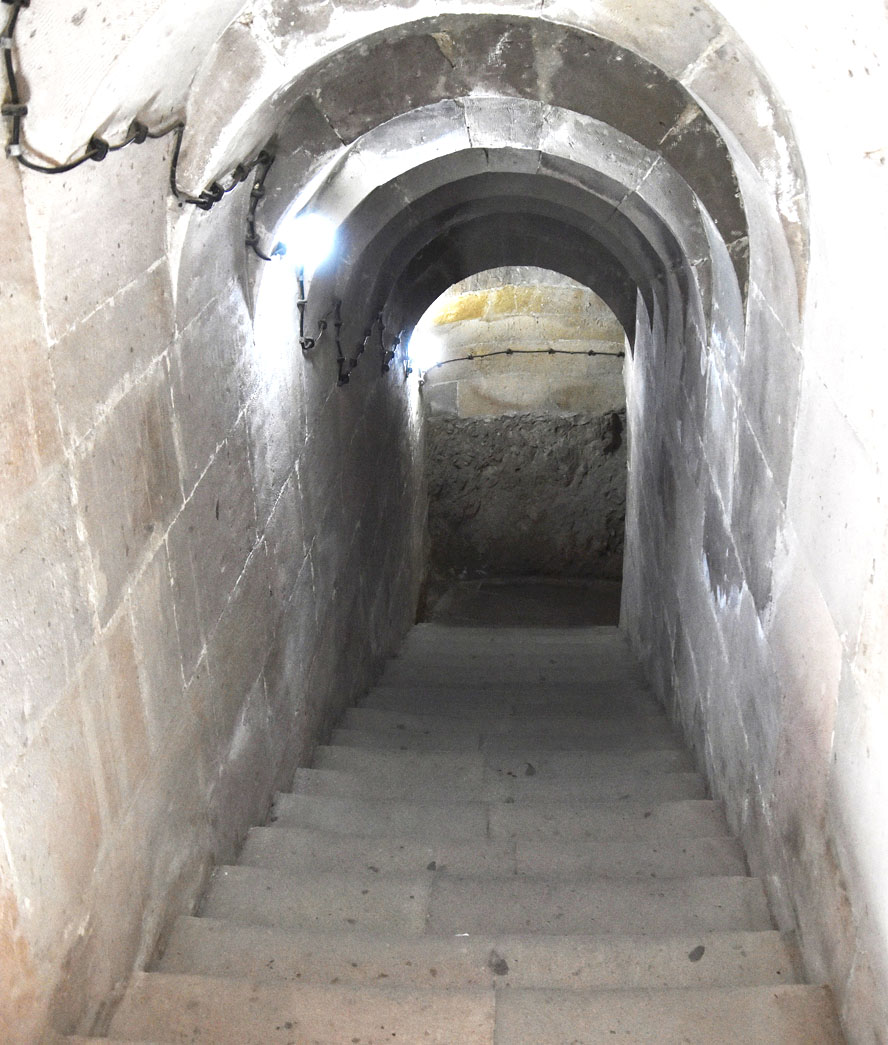 The underground corridors are fairly well lit, but God help you if the power ever went out. The first thing of note is what Yasemin tells us is a wine press. Derinkuyu had everything one would need to live underground for an extensive period of time, except sunlight. I would think that a few glasses of wine might help requite the fear when you knew that a fiend like Timur was looking for you just above your head. 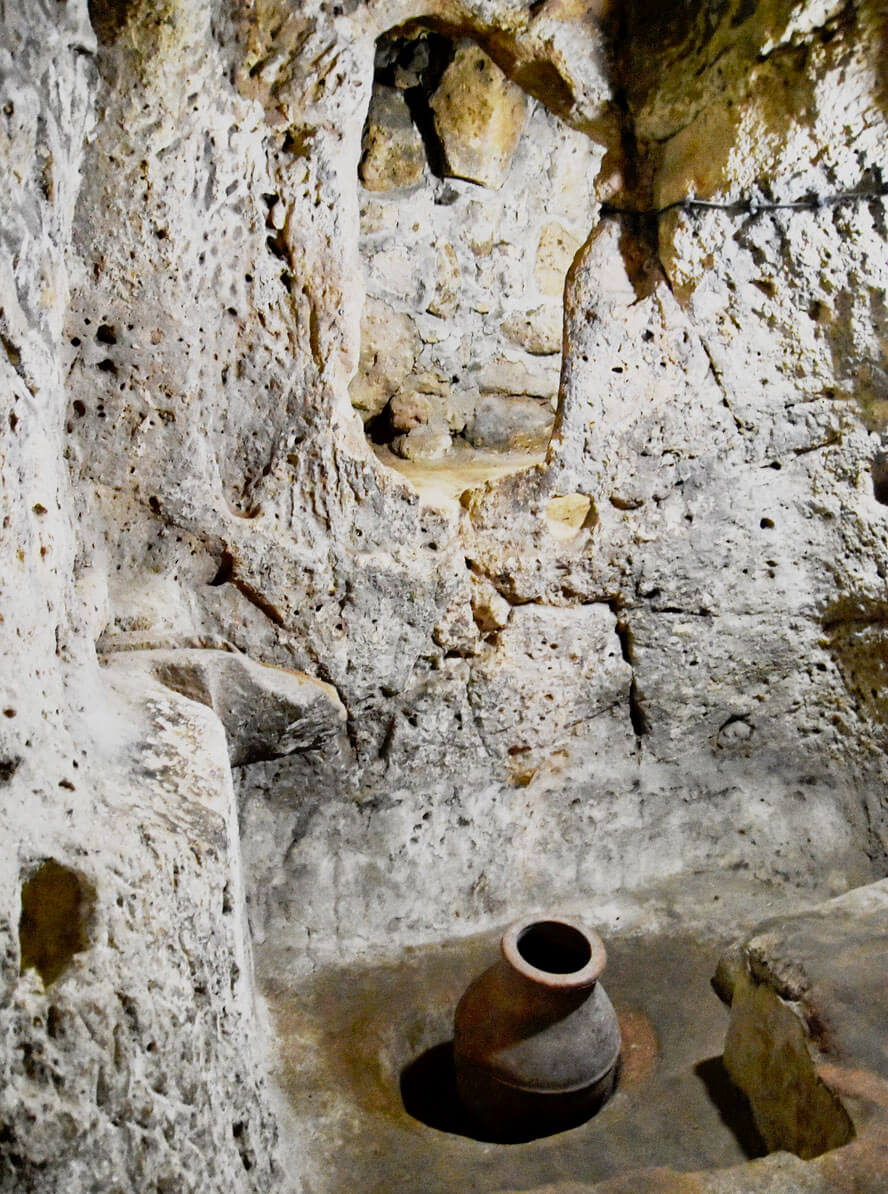 This is a very blurry shot of Alison and our group transitting from one room to another. As you can see the passageways are not exactly wide or high. 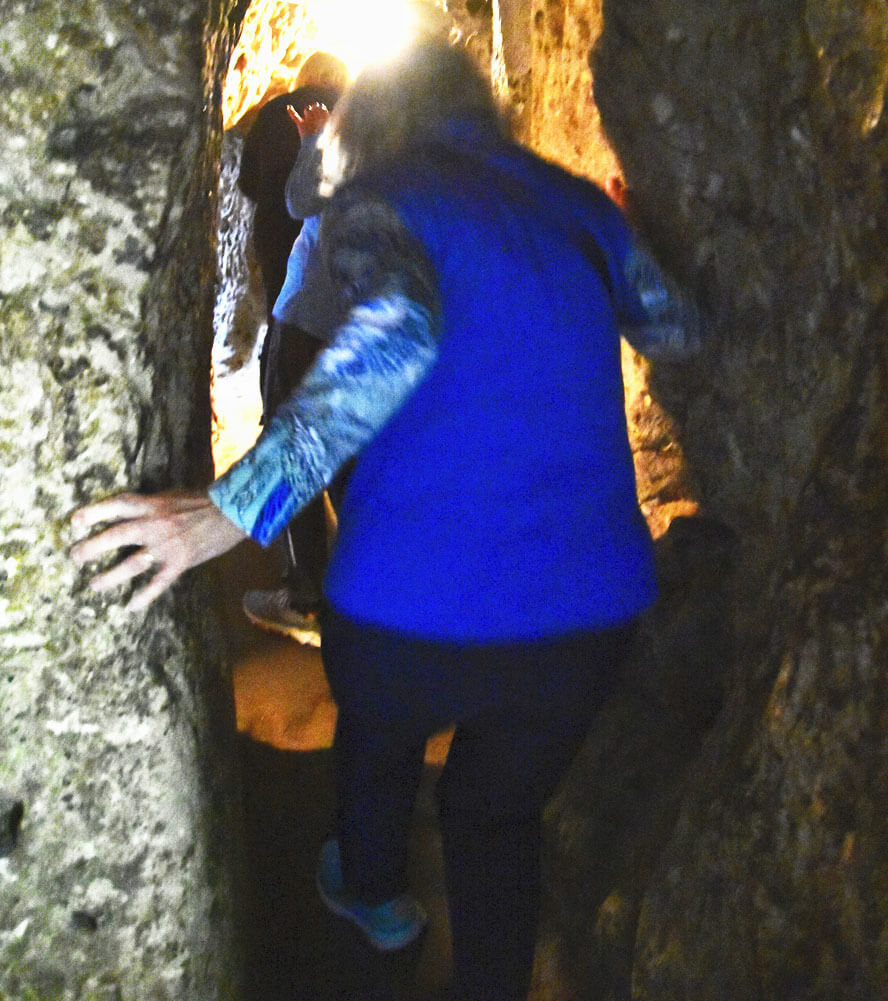 This is looking down one of the air vents that run from the surface to the lowest level which is some 180 feet below the surface and where we are headed. That's about the height of a sixteen story building in case you are wondering. And no, there are no elevators to get back up. 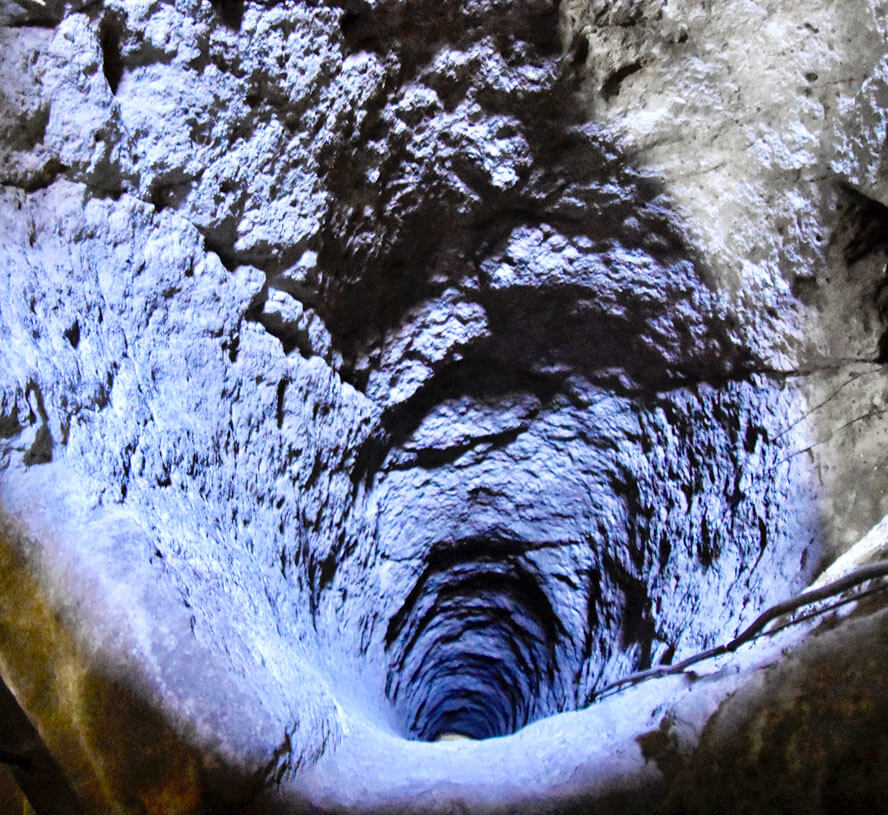 Looking Down an Air Vent

Well if the wine didn't disperse your fears, you could always pray. Derinkuyu had a large church at its lowest level – #5 on the map. To get there we needed to go down at least a couple of hundred feet in the narrowest of corridors where two people could not possibly pass each other. It was the only way in and out of the church. We had to wait at an open space above this passageway as about fifty people from another tour group came up. I could not help but think what would happen if two groups going in opposite directions met midway. Thankfully it didn't happen, but a number of our group declined to take the chance. 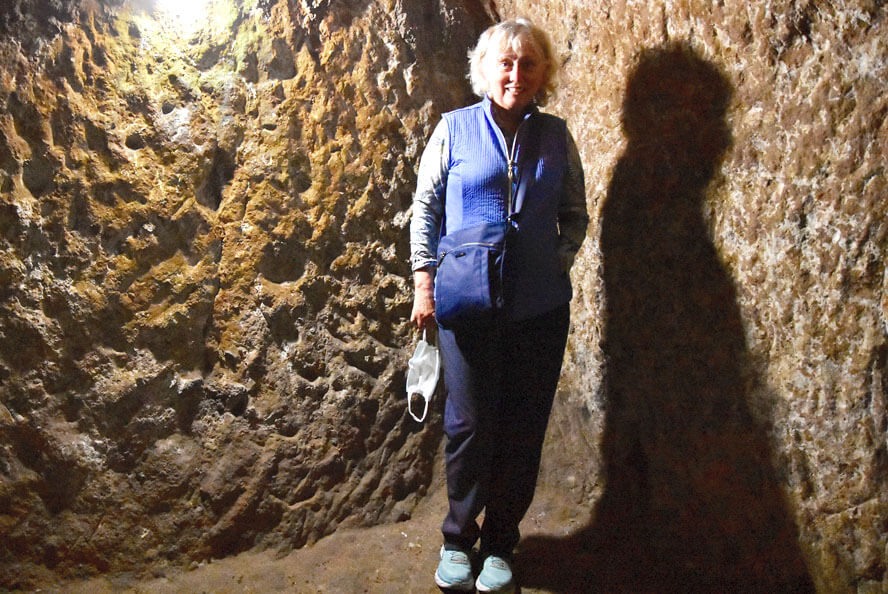 Alison in the Underground Church

I was more than a bit relieved when we got back up from the church and began following the blue arrows to the surface. This is one of the many side tunnels that lead off in many places, creating the effect of being in a maze. Believe it or not, one of these tunnels goes on for 9 km. (5.6 miles) to the underground city of Kaymakli which is also open to the public, but the tunnel connecting them is not. I should note that the current AA tour goes to Kaymakli and not Derinkuyu. 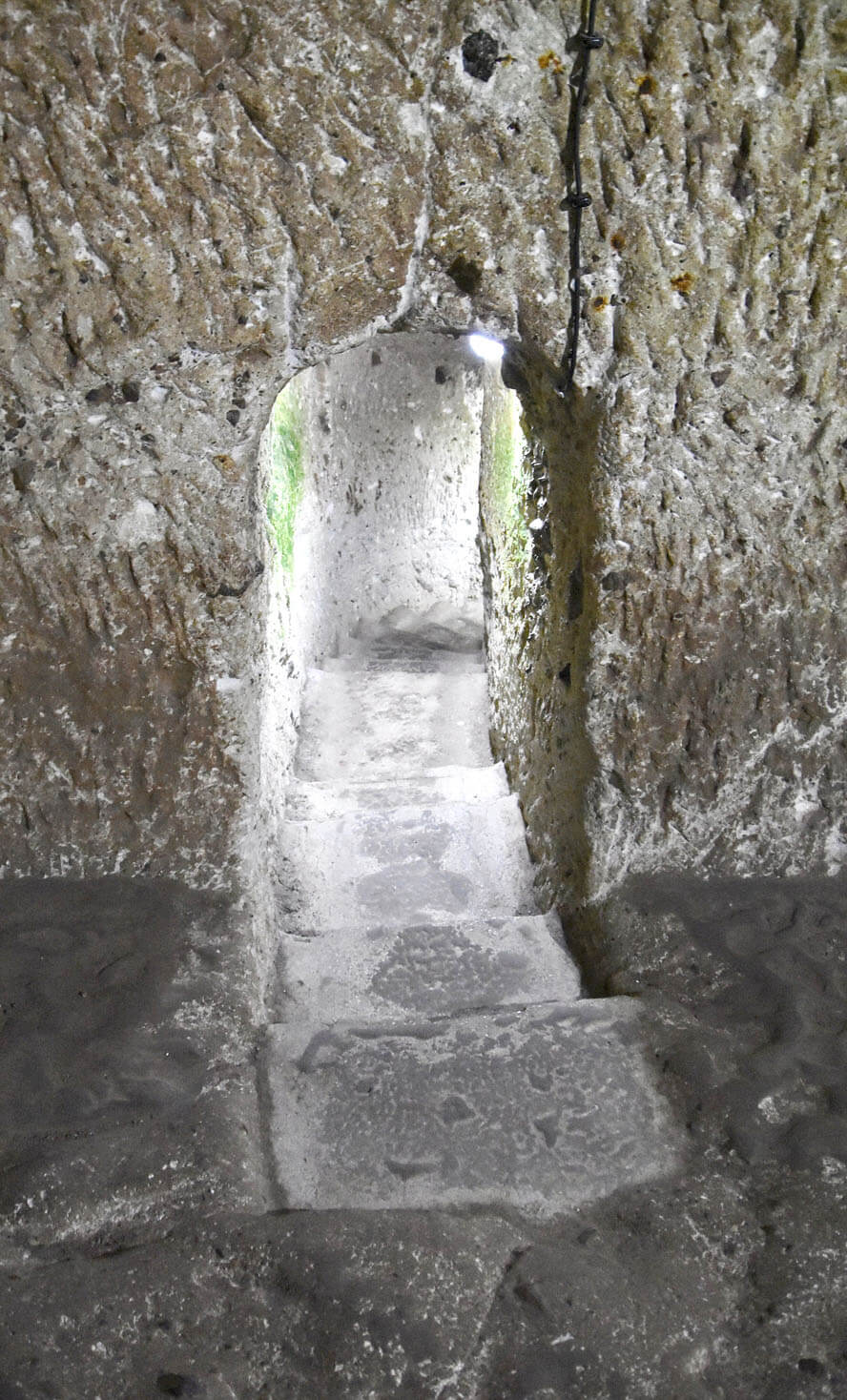 In case you are wondering how the shelterers managed to hide their presence from Arab and Ottoman invaders, there were only two entrances to Derinkuyu and these could be blocked with huge millstones of which we saw several on the tour. People on the surface would have no idea that these were shielding a host of people right beneath their feet.

As we made our way back towards ground level, we came to some very large open spaces that Yasemin explained were stables. Just how the heck they managed to get horses, sheep, cows and goats down the narrow passageways to these stables I have no idea. 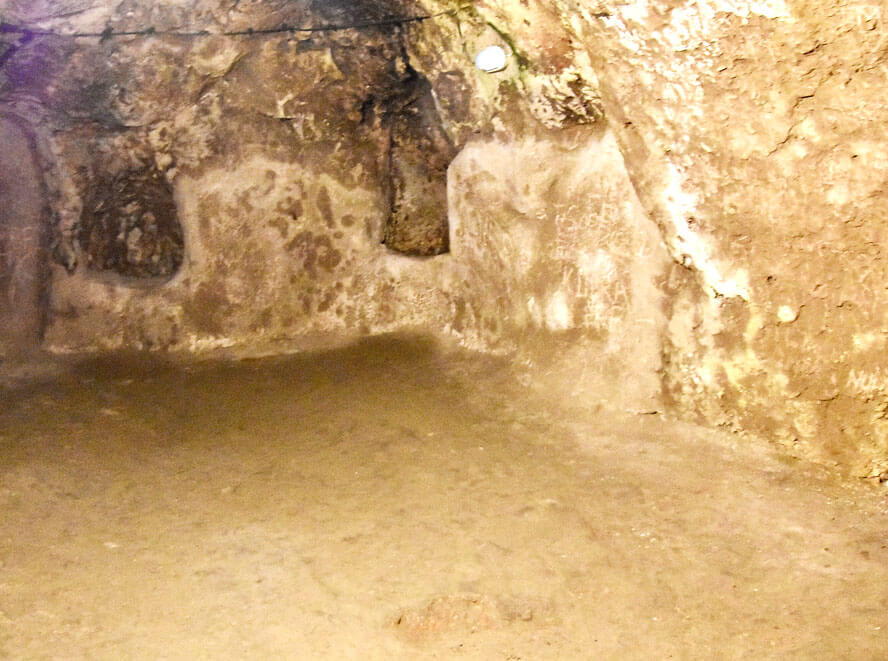 I can't say I was sorry when we once again saw the blue skies above Derinkuyu. We were all heaving and sweaty from the long climb back up.

I now turn from the monochromatic world of the underground cities to the brilliant colours of Turkish ceramics and rugs. After our visit to Derinkuyu, Yasemin took us to a nearby ceramics museum to view some splendid examples of Turkish workmanship of which I include four photos that speak for themselves. I think you'll agree that these are truly works of art. 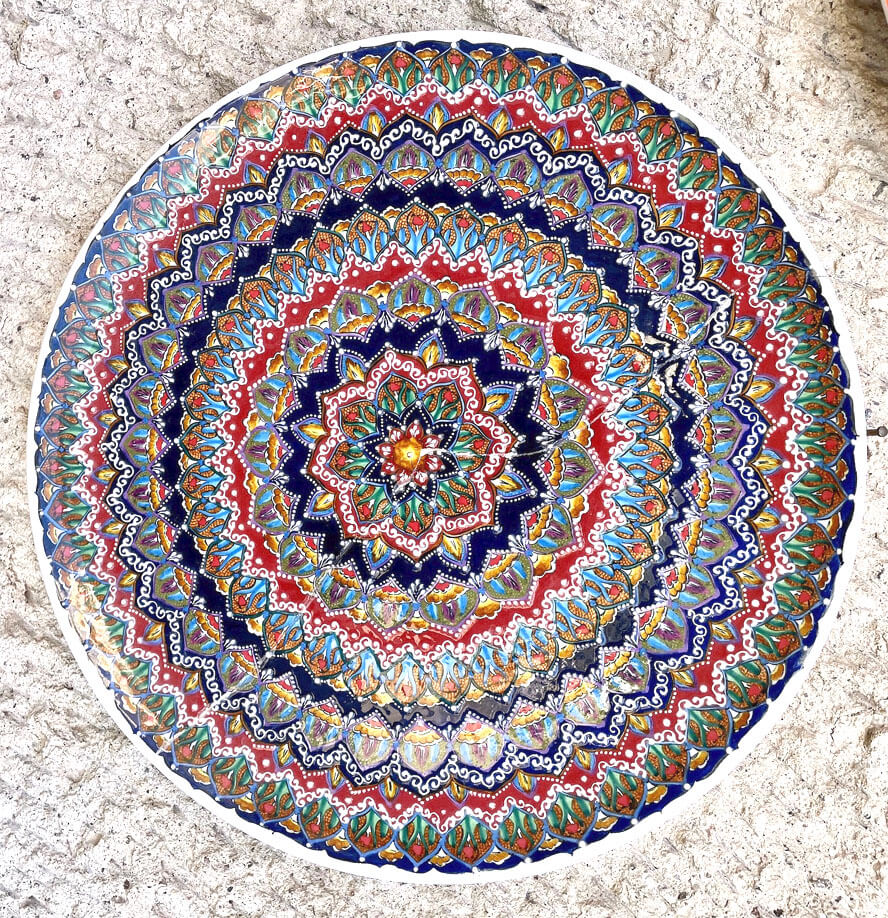 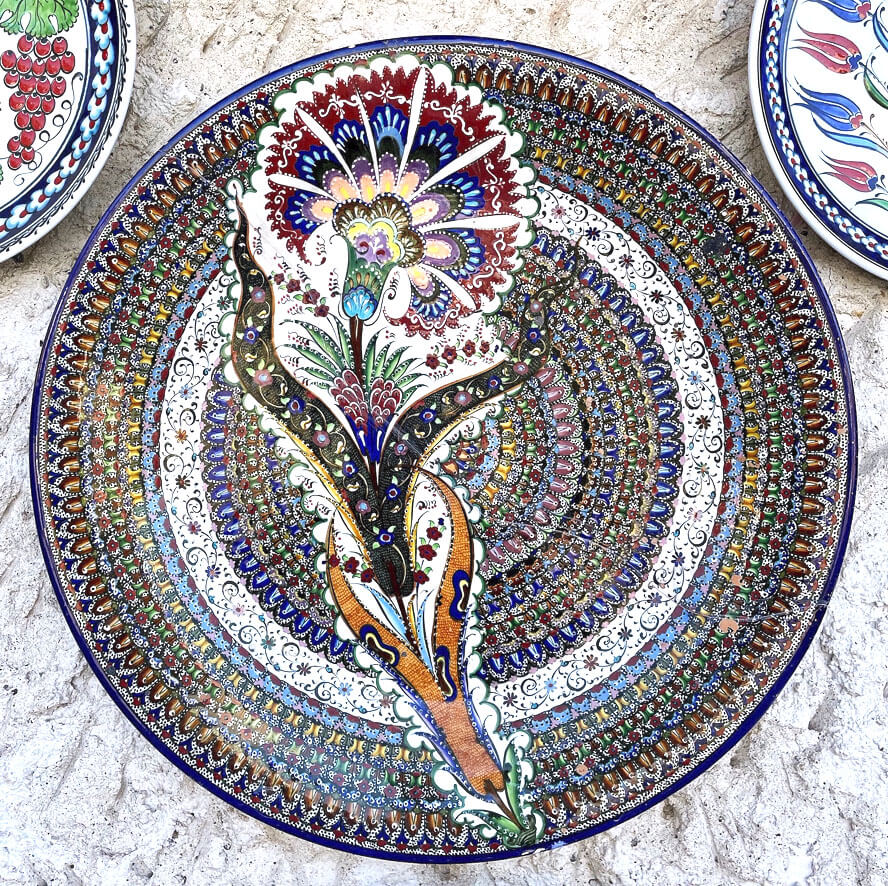 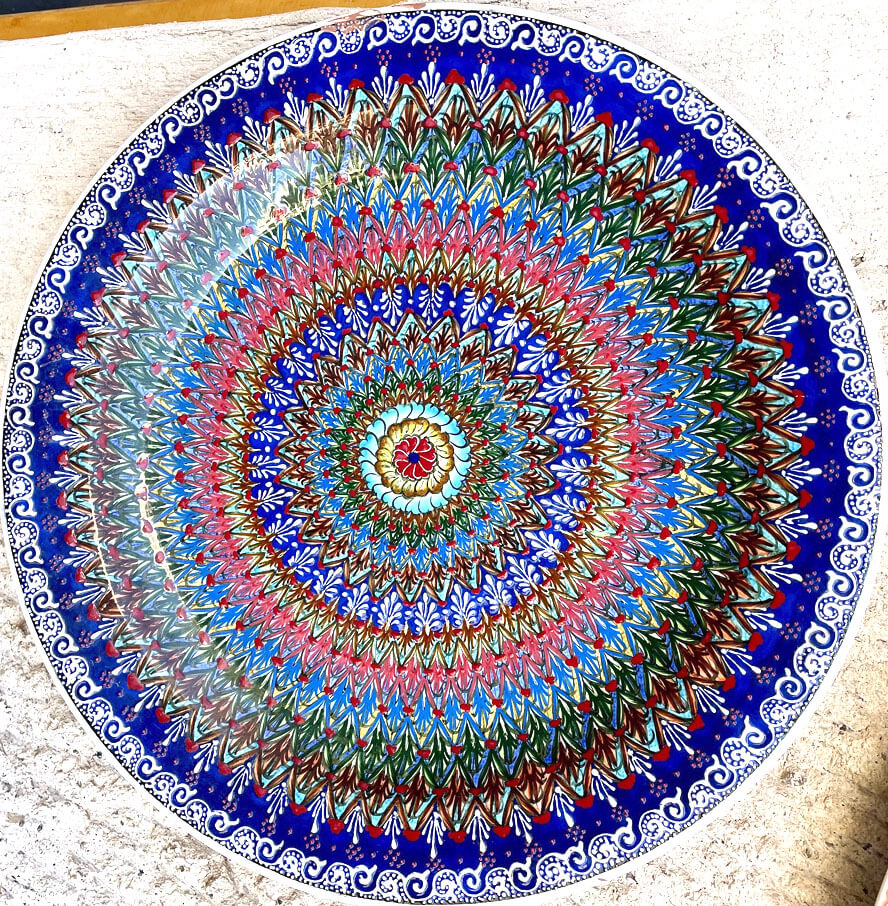 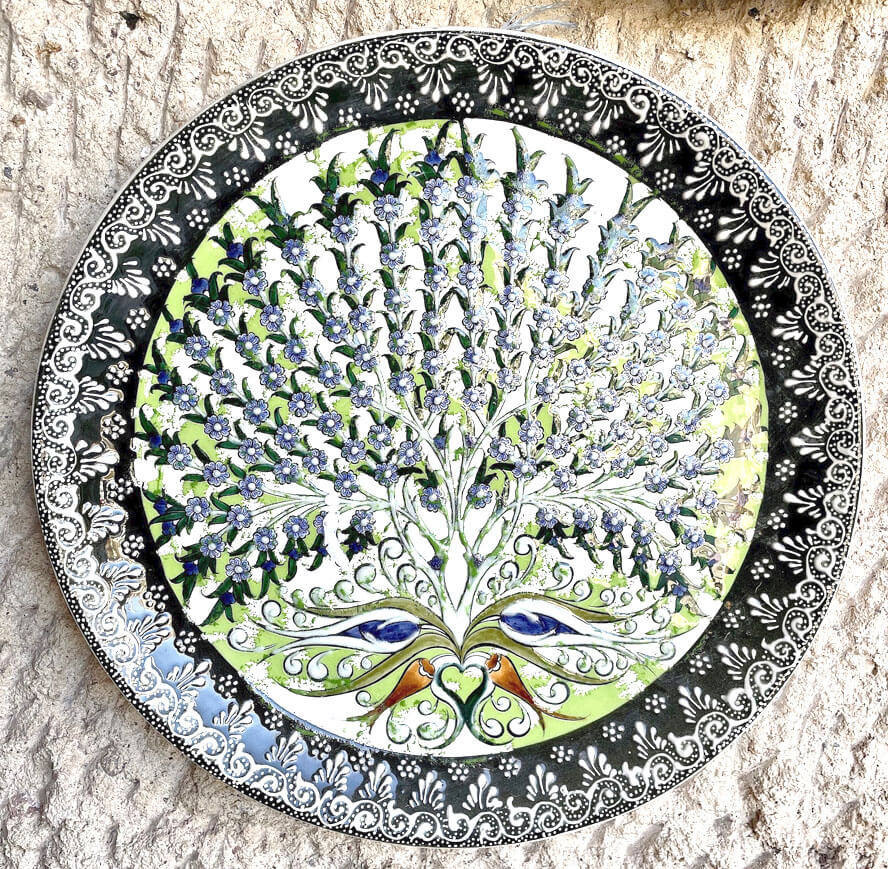 Sadly, we were now entering the last few days of our tour. Alison and I and a few others had indicated to Yasemin that at some point we would like to visit one of the state sanctioned carpet co-ops. On each trip to Turkey, we buy at least one Turkish rug and now was the time as Cappadocia has a number of reputable dealers. I confess that I did not attend as I am a crappy bargainer and tend to drink too much of the raki they ply potential customers with, while Alison is anything but. You must bargain hard to get the best price, but a beautiful Turkish rug is an instant heirloom that will last for centuries.

This is the one Alison purchased for us on this trip. 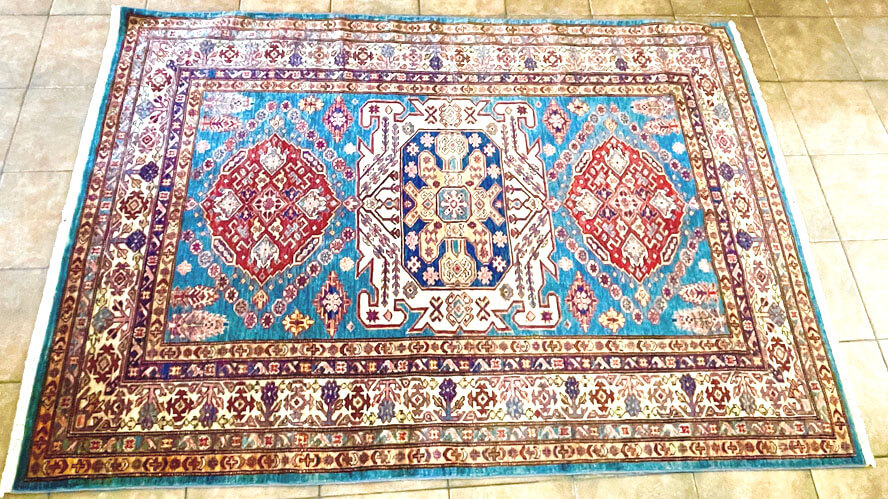 Well, we've seen Cappadocia from the ground level and today from below. In the next post, we'll take to the skies in a hot air balloon and see it from above. Join us if there is room on the basket.