In his latest blog post, Dale Dunlop, The Maritime Explorer, has a unique view of Cappadocia. Join him as he sets off Ballooning in Cappadocia. If you are interested in what Adventures Abroad has to offer, please check out our Small Group Tours.

This is my fourth and final post from Cappadocia on this Adventures Abroad, Western Turkey Tour. In the last one, we ventured deep underneath the bowels of Cappadocia to visit the underground city of Derinkuyu. In this one we'll do the very opposite, taking to the blue skies above Cappadocia in a hot air balloon. I was going to title this post Ballooning in Cappadocia, the Good, the Bad and the Ugly, but that title would have been too long for SEO purposes. Instead, I'm going to describe why taking that lifelong bucket list thing to do in Cappadocia is not all that it is cracked up to be, yet is still more than worthwhile. Please join Alison and me and a few other intrepid Adventures Abroad mates as we ascend over a mile above the wild Turkish landscape of Cappadocia.

I doubt that there's anyone who doesn't associate Cappadocia with images of balloons these days and yet it wasn't until 1991 that the first commercial balloon company was licensed. Today there are 25 companies offering ballooning in Cappadocia with up to 165 balloons taking to the air each morning. Over 500,000 people a year take part in what has now become one of the main drivers of the tourism industry in this part of Turkey. I confess that it was one of the principal reasons Alison and I signed up for this trip. We both love ballooning and there is nowhere more famous for it than Cappadocia.

While ballooning in Cappadocia is not part of the itinerary of the AA trip, it is anticipated that many of the tour participants will want to do it and our guide Yasemin Reis had determined a few days in advance who was up for it and who wasn't. About half of our group signalled our intentions to go and Yasemin made all the arrangements. I have to confess that I'm not even able to tell you which company we went with.

All balloon rides involve getting up well before the stroke of dawn and this was no different. We were picked up at the hotel in a van and driven God knows where to a plain where there were more balloons than I have ever seen in one place. Then we were in for a bit of a rude awakening.  In all our previous balloon trips we shared a basket with the captain and no more than eight other people. Ballooning in Cappadocia is completely different. If the other trips were the corner store, this was Walmart. Each balloon had 24 passengers and two crew. In these days of rampant Covid, this wasn't exactly comforting, particularly as most of the guests were not wearing masks. This is a photo of the basket with yours truly smart enough to grab one of the four corner positions to get the best views and avoid the exhalations of my fellow travellers. 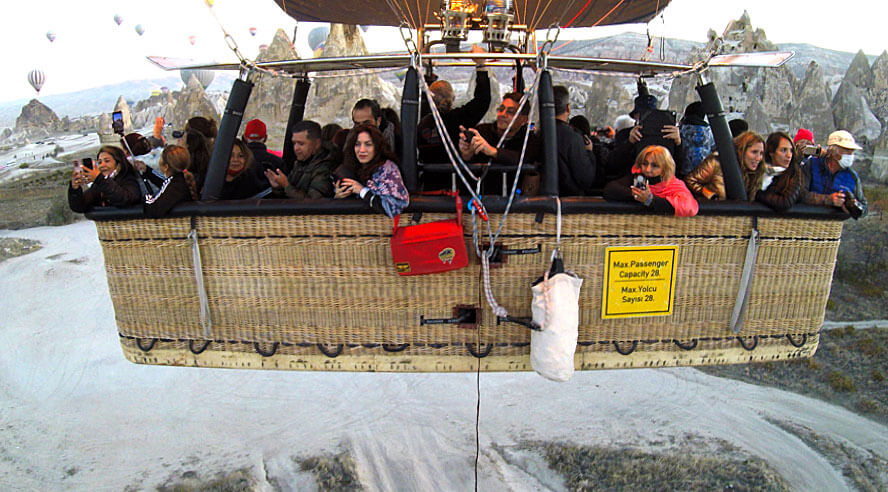 So this was the bad, but I'm getting ahead of myself.

The ballooning always starts with the inflation process which is both loud and fascinating at the same time as the giant behemoths slowly come to life and begin to arise from the ground. I am always amazed and a bit perplexed as to how just hot air can somehow be used to transport a couple of tons of people and their paraphernalia. 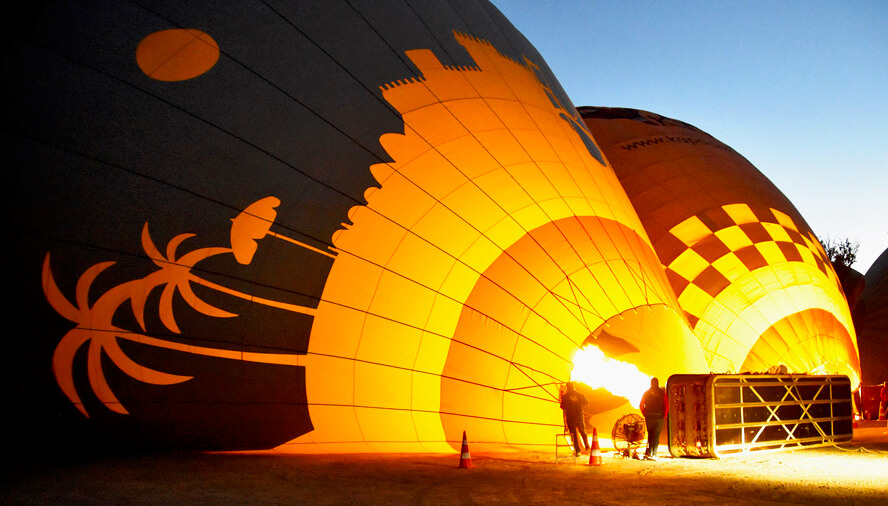 Now comes the ugly part of ballooning in Cappadocia which fortunately we were not involved in. 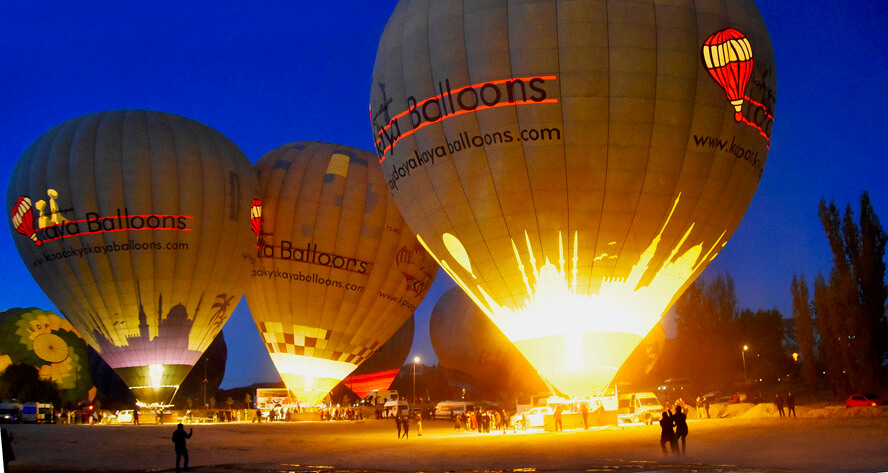 There were so many balloons in such a cramped space that they were literally bumping into each other as shown below. I was quite expecting one to get punctured or otherwise deflate and come crashing down. There have been some deadly incidents in the past.

OK, enough with the downer stuff, everything that follows is about the good part of ballooning in Cappadocia starting with the lift off. 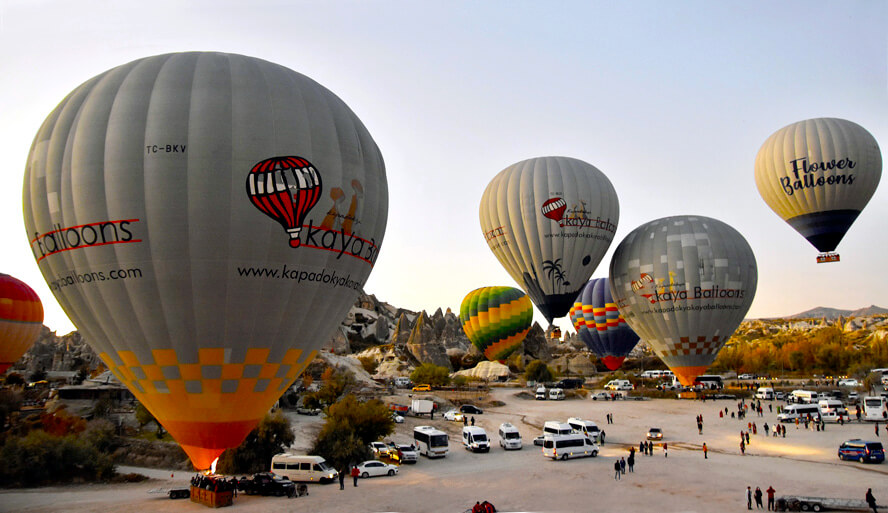 One of the reasons ballooning in Cappadocia is so popular is the consistency of the weather. It is almost always sunny with mild winds and this morning was no exception as the sun rose over the hills. 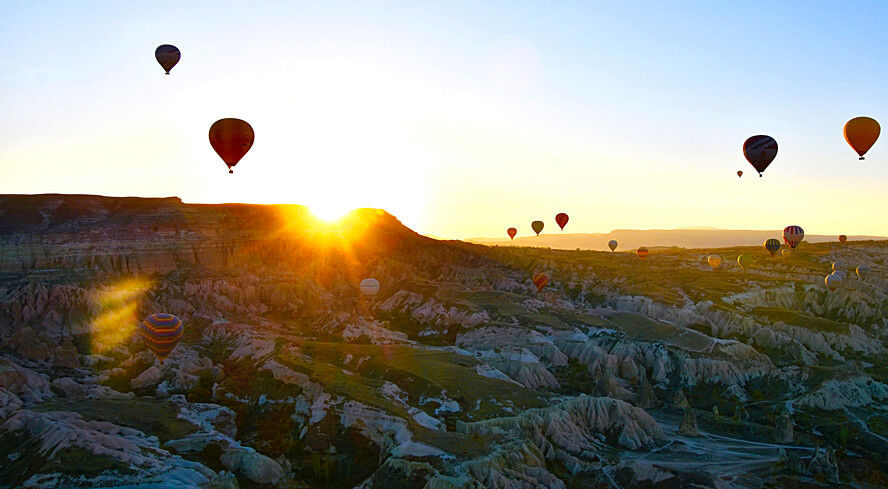 The people ballooning in Cappadocia are not the only ones watching the sunrise. There are many people on the ground as well. 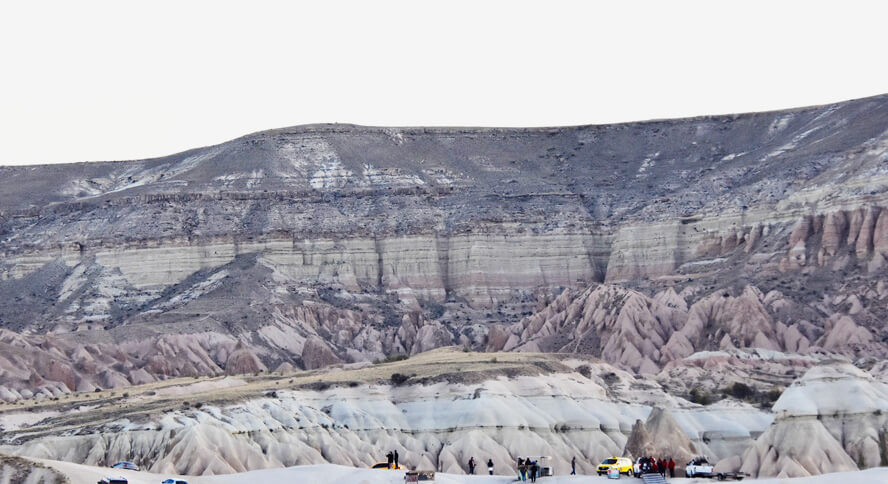 One of the attractions of ballooning in Cappadocia is the actual sight of the other balloons filling the horizon in all directions. 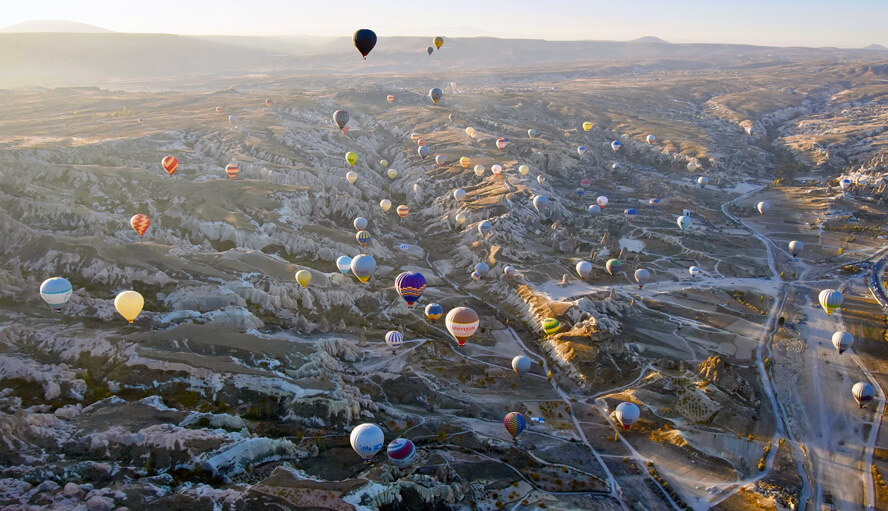 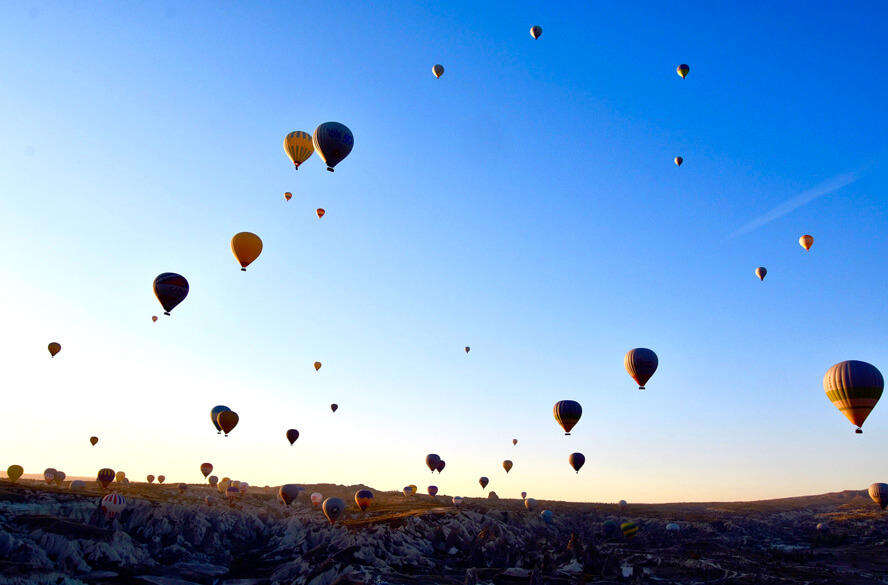 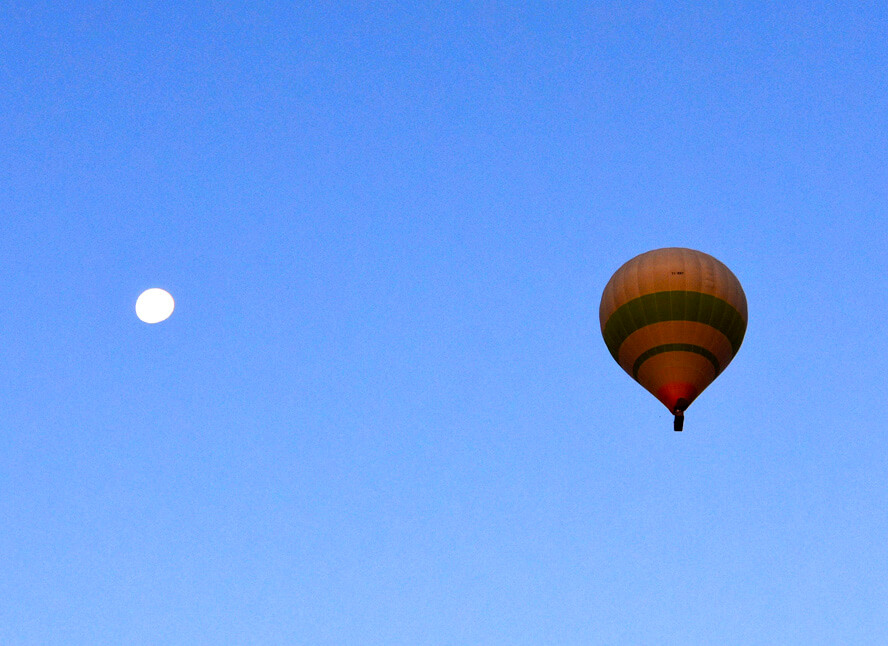 Then of course there are the fantastic landscapes that you see from above while ballooning in Cappadocia.

The morning light creates some very interesting effects on the ground below. 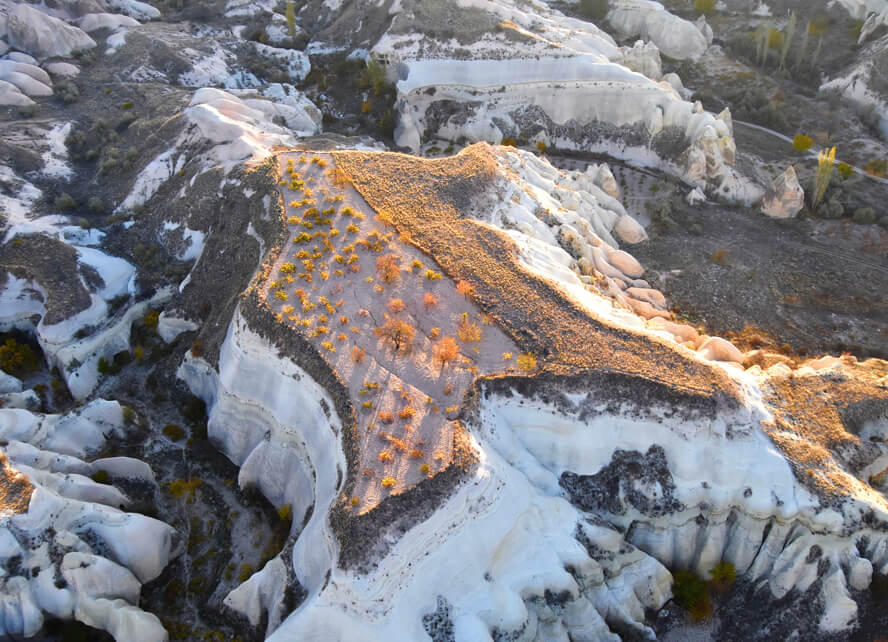 Then we start to go up, up and away.

This is the volcano Mount Hasan poking its head out from the surrounding morning haze. It is almost 11,000 feet high and as you can see our balloon is almost parallel to its summit.

Looking down I realize that I have never been remotely this high in a balloon before and that we seem to have left the other balloons far below. 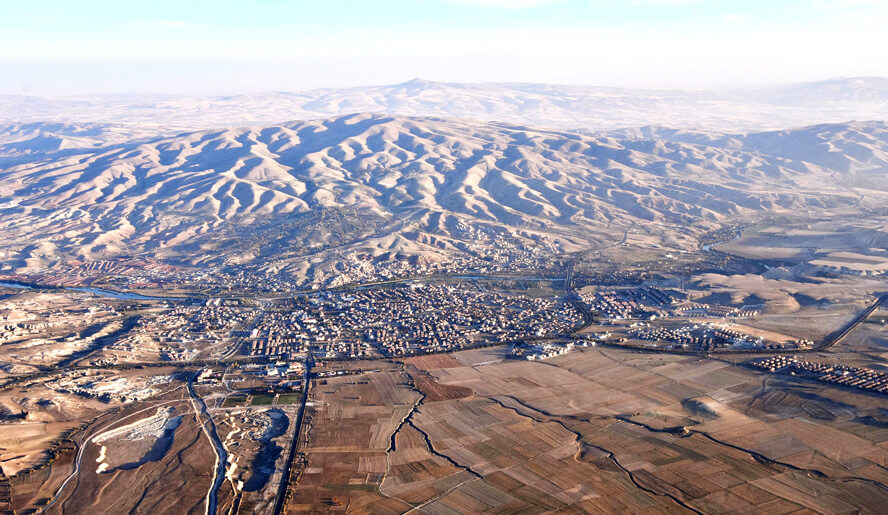 Then we begin a slow ascent. 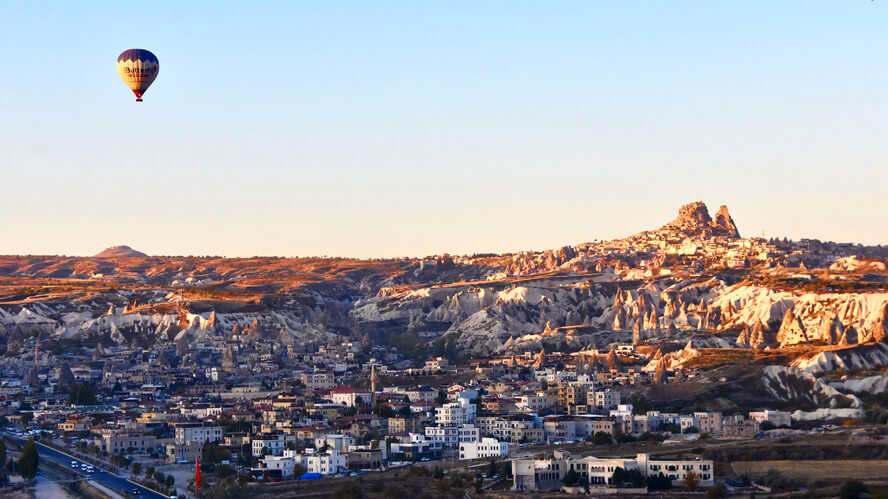 Over a Cappadocian Town

Before long we are almost at ground level and the sights here too are marvellous, like this troop of horseback riders cresting a hill. 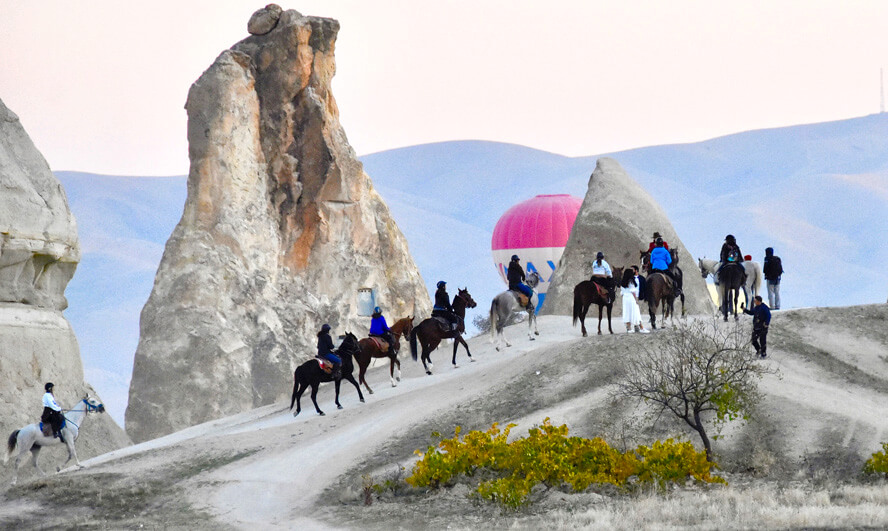 In places it looked like some of the other balloons were surely going to get their bubbles burst by the sharp hoodoos that in some cases were only feet away from the sides of a balloon. But nobody did.

Balloon Amidst the Hoodoos

But the thing that struck me the most was the many wedding parties. It was just so unexpected a sight that it seemed the perfect quirk to an already quirky landscape.

Our pilot expertly weaves our balloon between the hoodoos to get right over the celebrating couples.

This joyous couple put the icing on the cake to what had started out as a potential disappointing outing and made it the highlight of our time in Cappadocia, 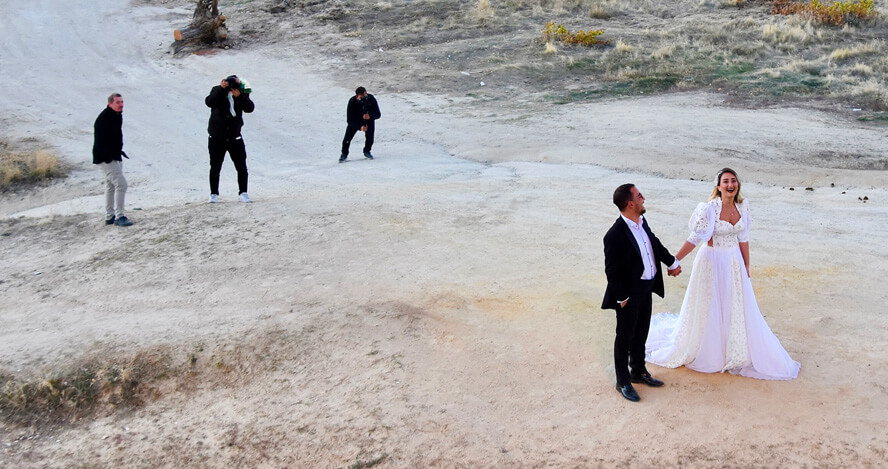 As we headed for a quite gentle landing, I looked up into the interior of the balloon and smiled back at the happy face, because ballooning in Cappadocia had after all brought that type of silly grin to my face as well as everyone else in the balloon. 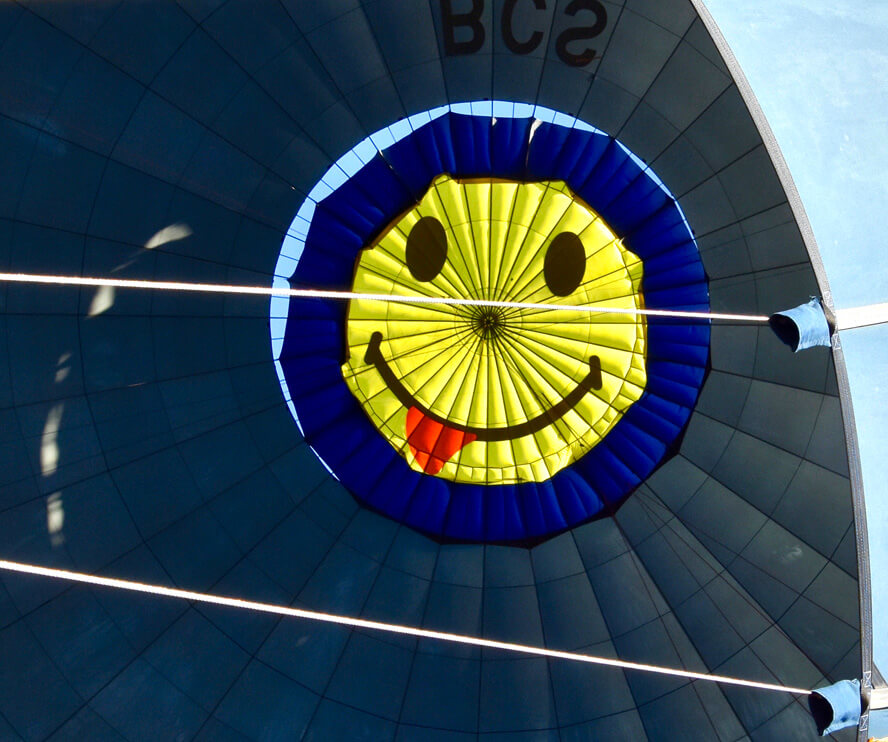 Inside of Our Balloon

So we'll say our final goodbye to Cappadocia and head for the Turkish capital city of Ankara. I hope you'll join us.