Side - Greco/Romans Ruins Amid a Modern Town

In his latest blog post, Dale Dunlop, The Maritime Explorer, reflects on his travels to Side - Greco/Romans Ruins Amid a Modern Town. If you are interested in dates and prices for this trip please check out our Small Group Tours to Turkey!

Today marks our final journey along the Mediterranean Coast on this Adventures Abroad trip through western Turkey led by expert Turkish guide Yasemin Reis. In the last post, we visited the wondrous ruins of Perge, one of the first places where St. Paul preached the new Christian religion. We will depart from the city of Antalya where we have spent the last two days and travel about 80kms. (50 miles) to the ancient city of Side which is overlain by the modern town of the same name. It will be our final visit to a Greco/Roman site before heading inland toward Konya and Cappadocia. Please join us as we explore one of the most interesting archaeological sites in Turkey.

This is a map showing the way from Antalya to Side which is mostly inland and not as scenic as some of the roads we have been on.

Side (pronounced sea-day) means pomegranate in Greek and it was Greeks who founded the city on a narrow peninsula on the Mediterranean coast at least seven centuries BCE. The patron goddess was Athena and we will see the remains of her temple on this tour. The city was just far enough away from the Greek, Roman and Persian centres of power to have quite a different history than many of the ancient cities we have already visited.

Unlike cities to the north, Side does not seem to have come as much under the yoke of the Lydians and then the Persians as they did, as little is known of it from those eras. It did certainly come to prominence after Alexander the Great arrived in 333 BCE and enjoyed a long period of Hellenization under both the Ptolemies from Egypt and then the Seleucids. In 190 BCE a fleet from Rhodes captured the city and titularly allied it with Pergamon which was just coming under Roman control as we noted during our visit there. However, the Pergamon administration basically ended at Perge leaving Side as an independent city for over 120 years. Unfortunately, the citizens of Side blew their freedom by becoming pirates and making the city the centre of the eastern Mediterranean slave trade. This was a bridge too far for the Romans and in 67 BCE the great general Pompey crushed the pirates and Side was absorbed for good into the Roman Empire.

This actually turned out to be a good thing for Side as Augustus and other emperors poured money into public works making the city one of the most important in this part of the empire. The slave trade was not abolished, but just taken over by people with Roman connections, so the city continued to prosper on the basis of human trafficking. This prosperity lasted until the decline of the western Roman Empire in the 4th century. Although it was incorporated into the Byzantine Empire that did not last and in the 7th century it was sacked and burned by Arab invaders. By the 12th century, it was completed abandoned and no one lived on the site until 1895 when Turkish refugees from Crete took up their abode literally among the ruins. The modern town dates from only that period onward.

While Side remains a quiet seaside town, just across the bay is the Las Vegas-like resort of Alanya with its garish high-rise hotels that cater mostly to Russian tourists. That makes a visit to Side quite different than any we have yet on this trip. This becomes apparent the moment we pull into the huge parking lot which is situated on the edge of the town. Here there are already many other buses and tons of cars with Russian plates. 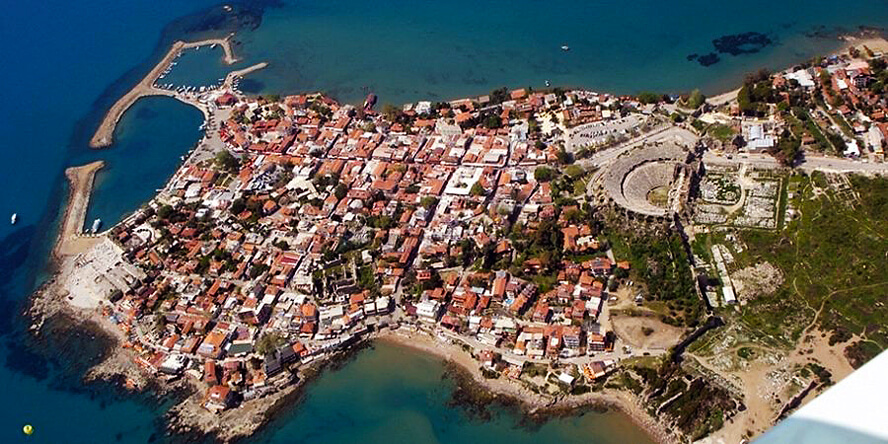 Aerial View of Side

Aside from the huge parking lot, the second thing that makes Side different from all the other sites we have visited is this tram that you need to take from the parking lot to the entrance to the town proper. 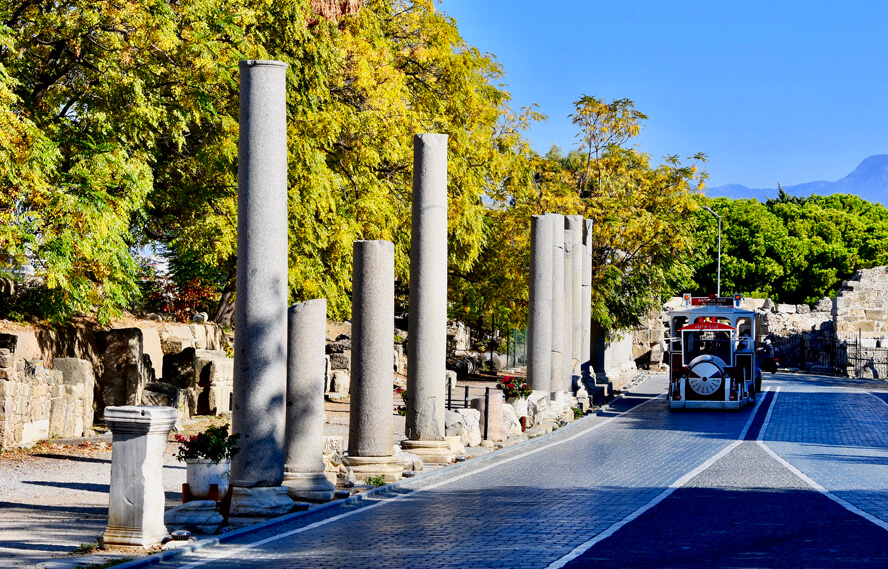 The tram passes by the ruins of the agora on the way. If Disney were to create a ride called 'Wonders of the Ancient World' it would probably look something like this, except this is real. 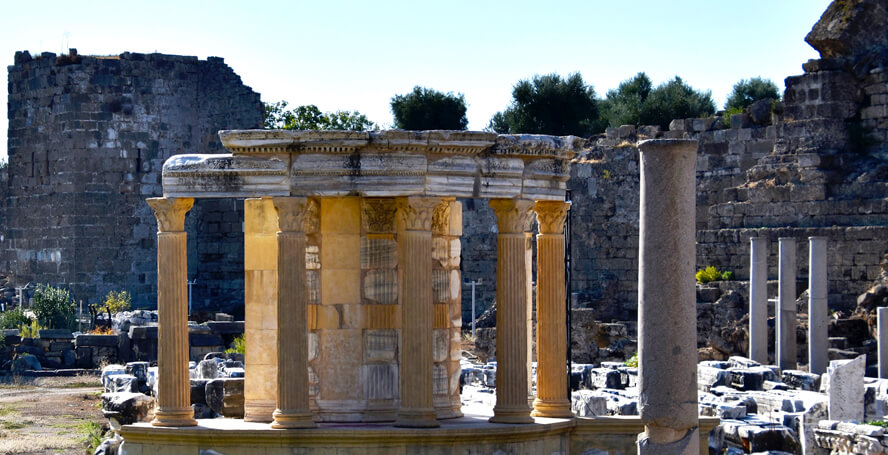 Getting off the tram near the entrance to the theatre we see crowds waiting to get into a place for the first time since Istanbul. They are all Russians here on a day trip from Alanya. 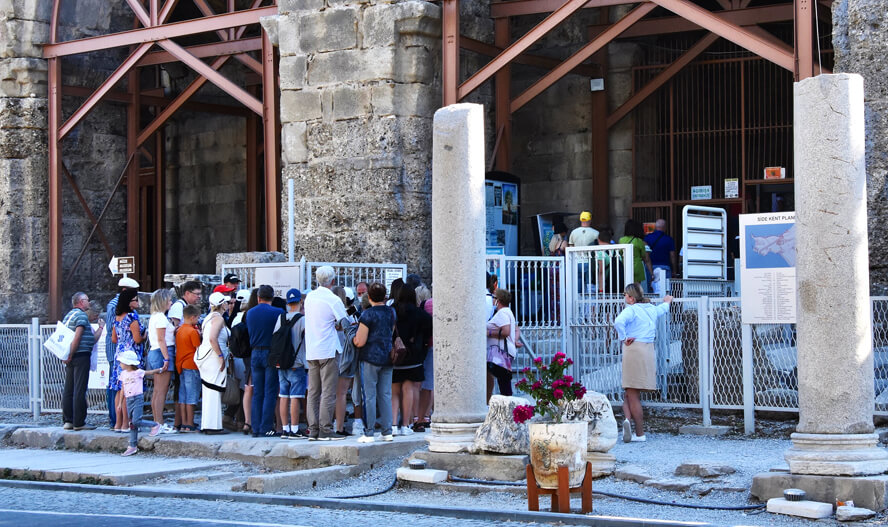 First Time We saw Crowds Outside of Istanbul

However, once we get into the theatre it doesn't seem so crowded. 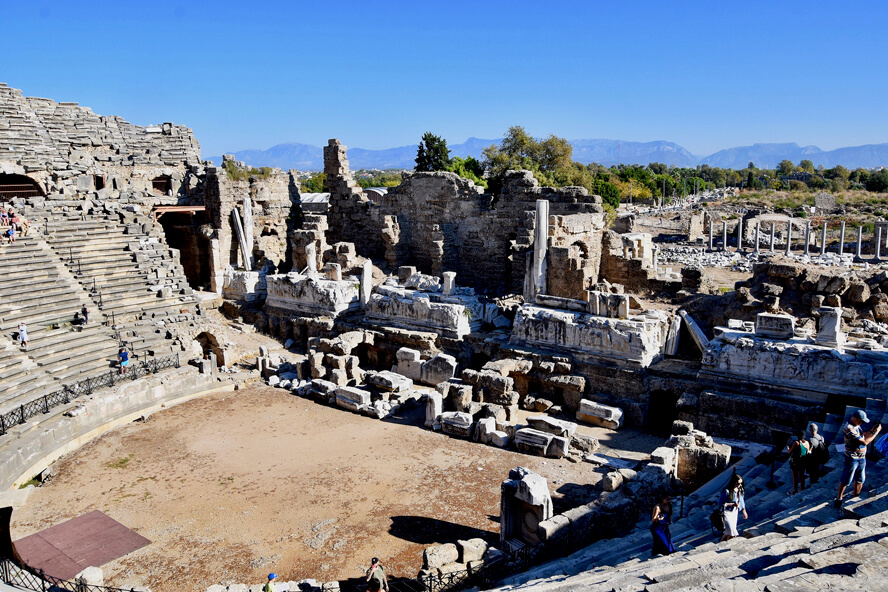 This will be the last theatre we visit on this trip and by this time there is definitely a bit of 'theatre fatigue' setting in. 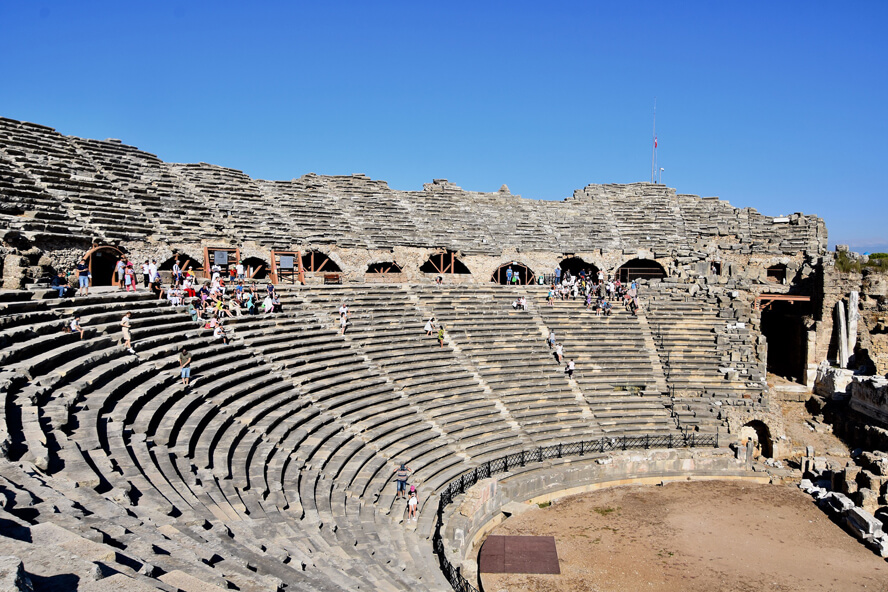 However, here is a great view of the agora from the theatre with the Taurus Mountains in the background.

Once we leave the theatre we are on our own to explore Side at our leisure for a couple of hours. It is an intriguing place. The main street Liman Caddesi leads directly from the theatre to the end of the peninsula where we will find the remains of the temples of Athena and Apollo. While the street is very busy, I would not call it thronging. In fact, if you go just a block from the Liman Caddesi you can get away from the crowds completely. 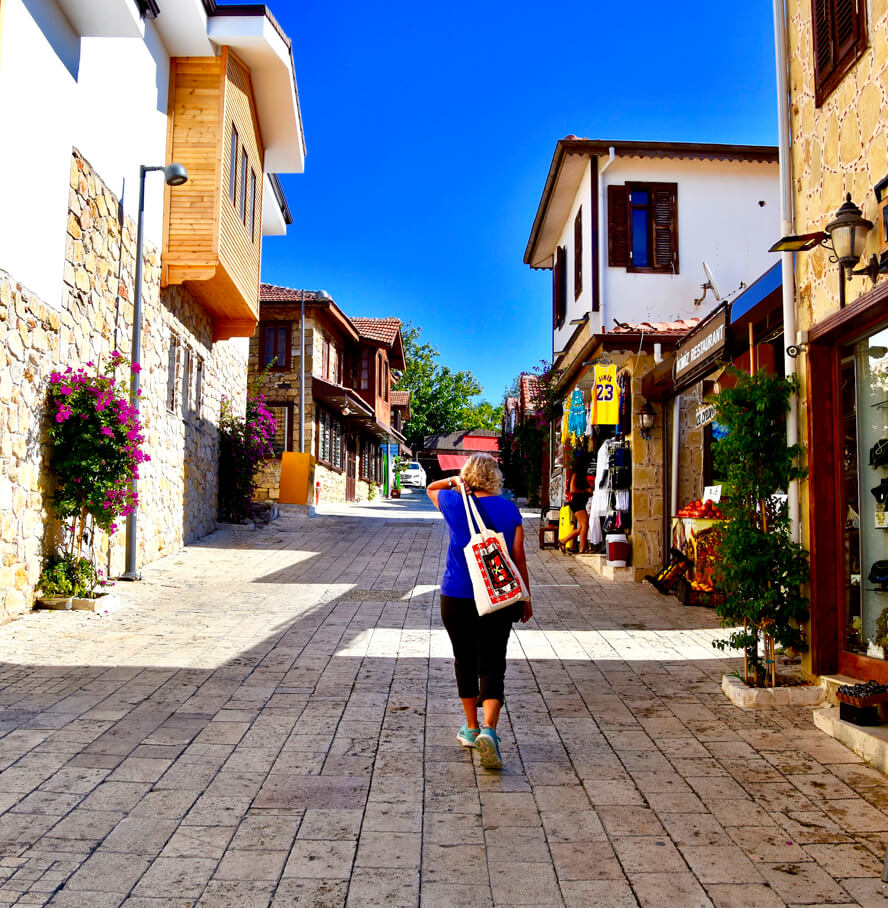 Away from the Crowds

Remember I wrote that Side means pomegranate in Greek. If you forgot, you would soon be reminded by the many vendors in the town selling pomegranate juice. 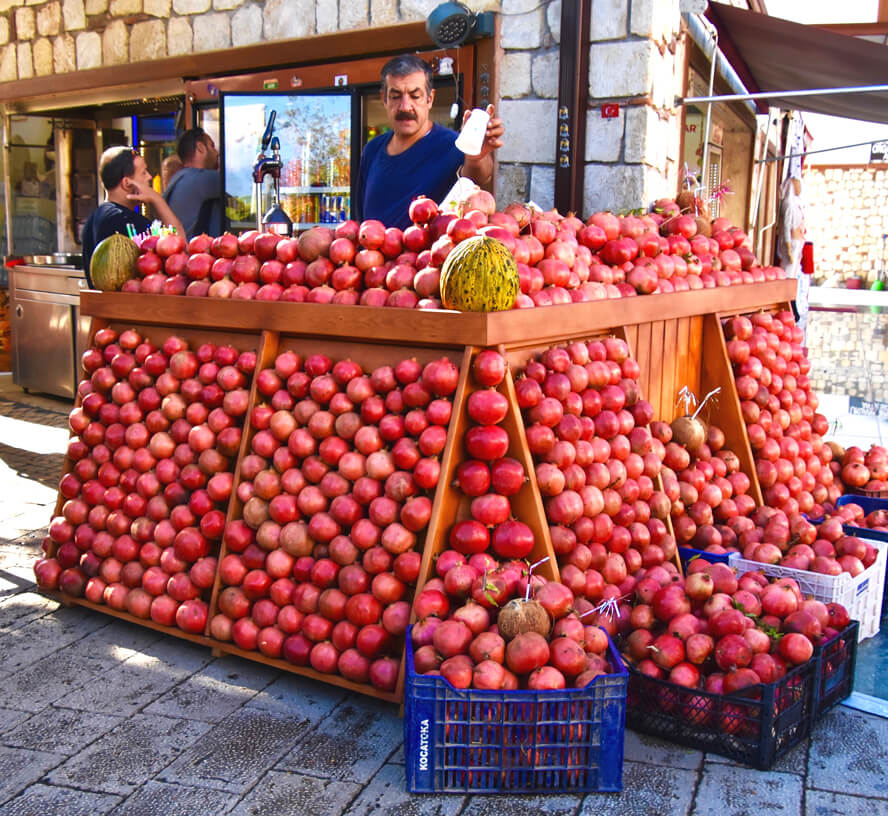 Another thing that makes Side unusual among archaeological sites is the many places where the paving blocks of the streets give way to plexiglass and you can walk above the ruins of the ancient city. 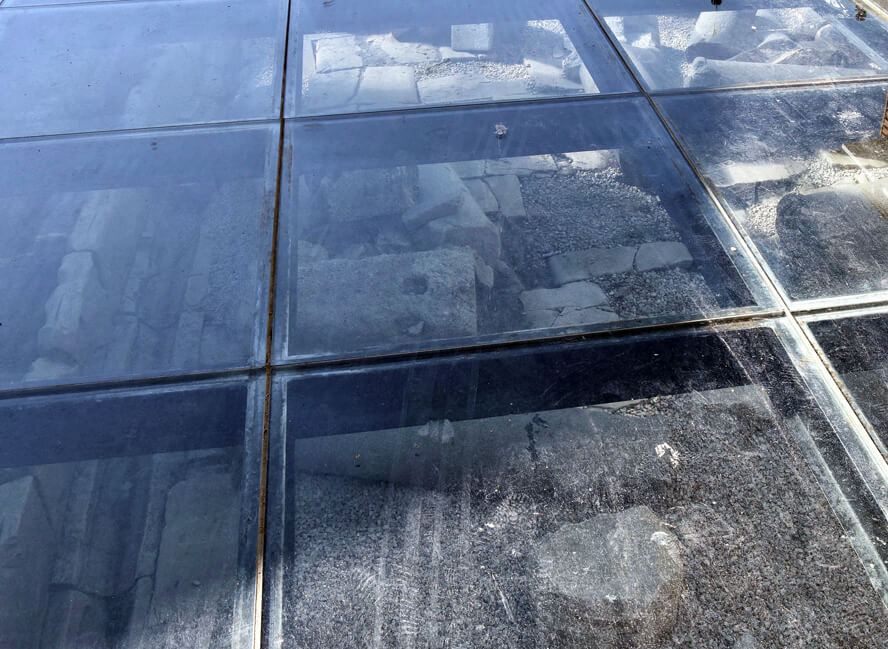 Aside from the theatre, the main attractions of Side are the remains of the temples of Apollo and Athena which are side by side at the end of the peninsula. This is the temple of Apollo which despite being dedicated to an ostensibly Greek god was built by the Romans in the 2nd century. Its location must have been one of the best in the ancient world, visible from miles away by incoming mariners. 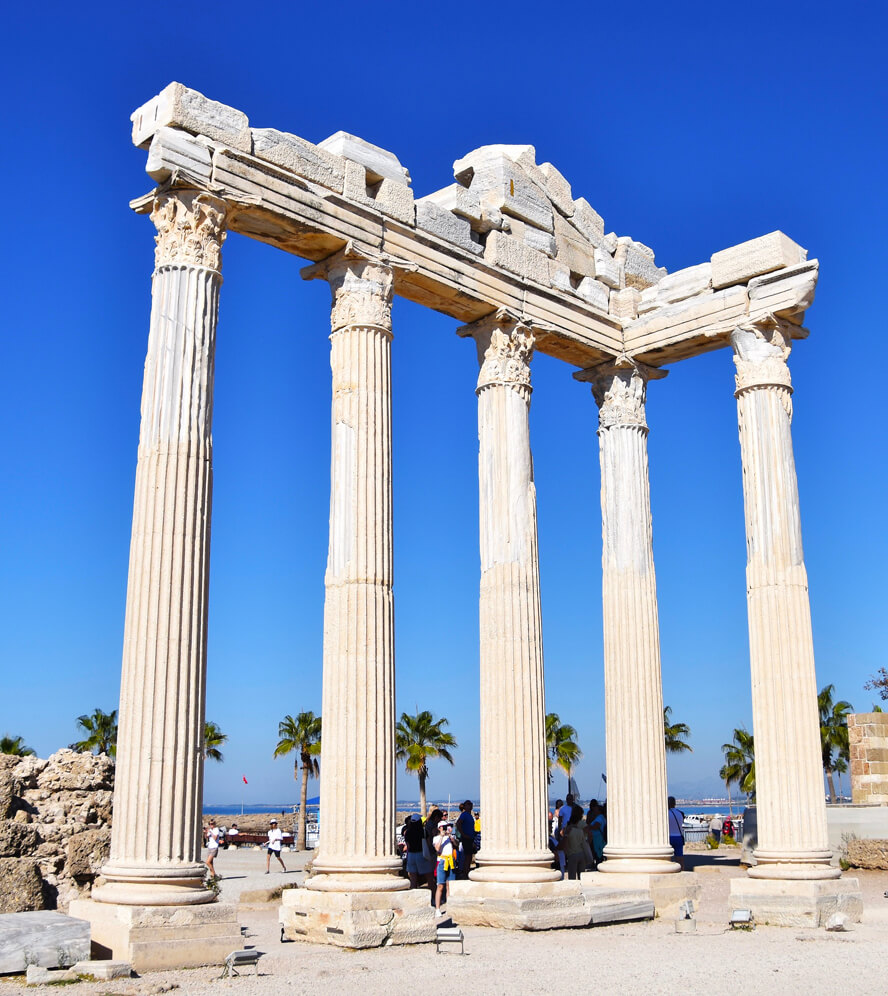 Much of what you can find on the internet conflates the temple of Athena with that of Apollo, inferring that there is only one temple on this site, but I believe that to be incorrect. The few battered columns you see in this photo are beside the temple of Apollo and from the much older temple of Athena who was the protective god of Side. These date from the 2nd century BCE and are 400 years older than the Roman temple, but I have seen articles that claim they were both built at the same time which seems unlikely. Beside it are the remnants of a Byzantine basilica from the 5th century. 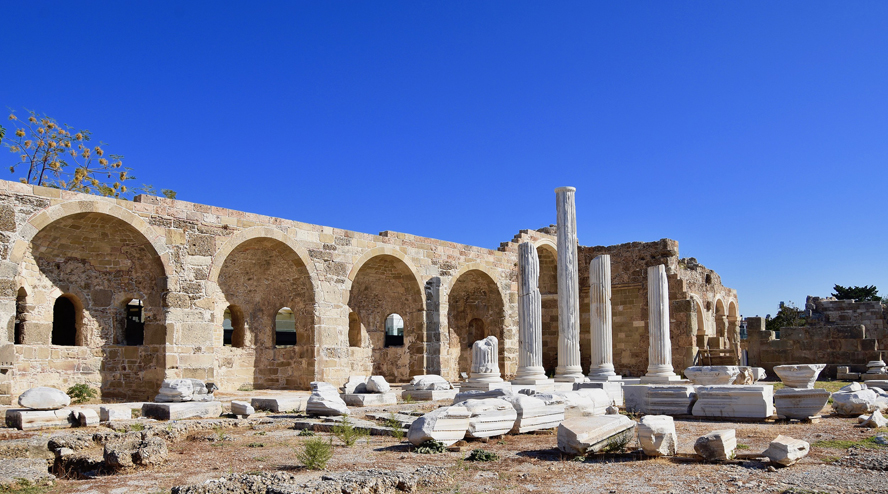 Here is a photo showing all three ruins. 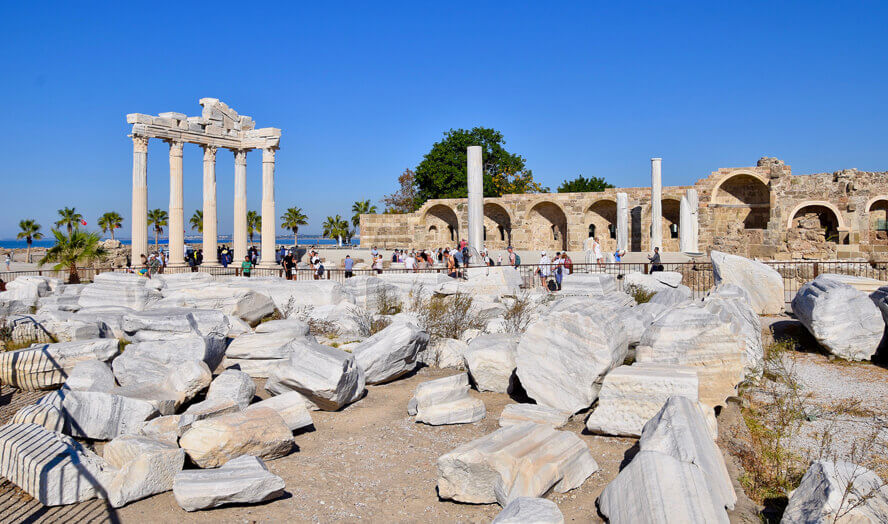 Returning to the tram stop we came across the world's cutest dog which I blame for the fact that not long after this trip was over we got two more of our own. 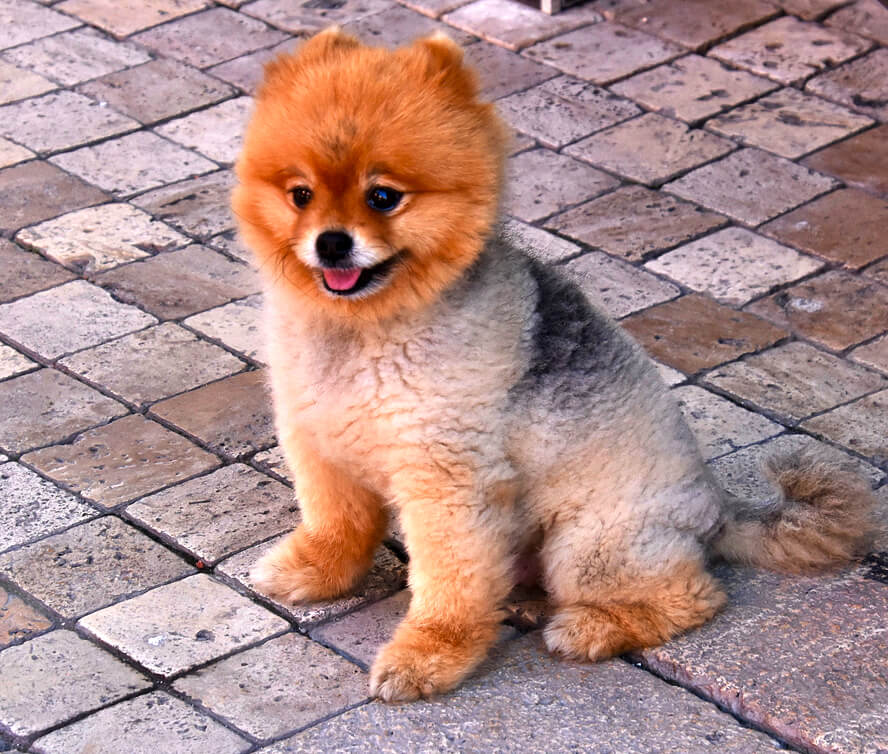 This is a view of the resorts across the water in Alanya which cater mostly to Russian tourists. I have to wonder how many of them feel welcome now considering what they have done to Ukraine. Just checking prices on Expedia I see you can now get an all-inclusive stay for less than $50 USD a day.

In the next post, we will leave the Mediterranean behind and head through the Taurus Mountains to the city of Konya where the whirling dervish sect of Islam was first practiced. I hope you’ll come along.

Published on 27 June 2022
< Tahiti Circle Part II
Konya - Home of the Whirling Dervishes >
Recent Blog Posts
Switzerland with Adventures Abroad
Goreme Open Air Museum
Dolphin Watch with Dr. Michael Poole
Cappadocia - Where and What Is It
Manava Beach Resort - Heaven in Moorea
Via Egnatia with Adventures Abroad
Can't find what you're looking for?