Discovered in 1974 by a local farmer who was digging for a water well, the Terracotta Army and museum are undeniably one of China’s most awe-inspiring collections and, without a doubt, one of the highlights of a trip to China. In a space roughly the size of a football field, it is estimated over 8000 soldiers, 130 chariots, and 520 horses were buried. 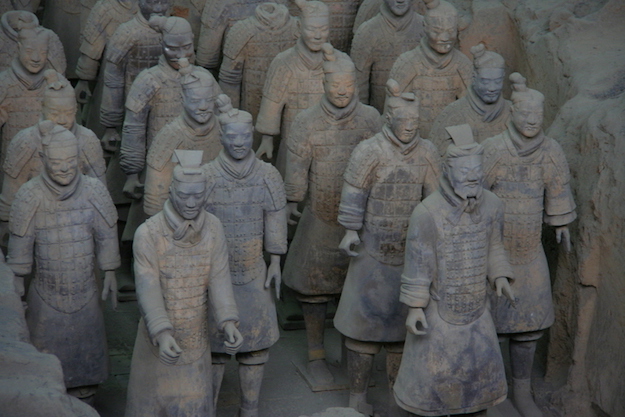 In the more than 2,000 years since these sculptures were created, much of the area they’re located in has been covered with up to five metres of sandy, reddish soil. This photo is from our China tour including the Terracotta Army.
Photo credit: Tour Leader Rachel Kristensen

As of now, over 2,000 figures have been unearthed and are found guarding the tomb Qin Shi Huang, the first Emperor of China. Construction of the site started in 246 BCE and was completed by the work of over 700,000 workers.

It is thought the locals worked in an assembling line, producing the pottery figurines in sections, placing limbs together after made individually rather than as a whole piece. The faces of the soldiers were created in 8 different styles.

Crafted with details such as facial hair, a variety of bone structures,  and a diverse range of eye sets it is thought that the different soldiers represented the emotions and temperaments of the times. Graceful eyebrow and eyes representing a canny soldier.

Braveness was illustrated in eyes that are wide and staring.  While those with a  wide face, large head with bushy eyebrows and large eyes are thought to have been simple men. While pieces from the collection have been shown around the world, no collection of the Terracotta Army can duplicate the mass scale of discovery which the museum in Xi'an has.

Archaeologists are still uncovering more pieces and our small group China tour includes a fully guided excursion to better understand the work archaeologists are doing on this famous discovery.

Check out our next tour of China, which includes the Terracotta Army.

Published on 29 May 2015
< What island hopping on a Greek Island tour looks like
Touring the Five Stans: A Photo Journey through Central Asia >
Recent Blog Posts
Topkapi Palace - An Istanbul Wonder
Ua Pou - Marquesas' Cathedral Island
Basel - Amazing City on the Rhine
Museum of Anatolian Civilizations
Nuku Hiva - We Reach the Marquesas
Geneva – World’s Most International City?
Can't find what you're looking for?