Didyma and the Oracle of Apollo

In his latest blog post, Dale Dunlop, The Maritime Explorer, explored more of Turkey and visits Didyma and the Oracle of Apollo. If you are interested in dates and prices for this trip please check out our Small Group Tours to Turkey.

Our intrepid group of Covid weary travellers has just moved on from the wondrous site of the ancient city of Ephesus as we continue exploring western Turkey with Adventures Abroad led by Yasemin Reis. Our eventual destination today is the small coastal city of Bodrum, once known as Halicarnassus, the site of one of the Seven Wonders of the Ancient World. But before we arrive there we have an important stop at yet another site once famous throughout the ancient world, the Temple of Apollo at Didyma.

Here is a map showing our route this morning from Kusadasi to Didim which is the Turkish name for Didyma. At the beginning of the trip, we get good views of the Greek island of Samos which was the birthplace of Hera, the wife of Zeus and most vengeful of all the gods. The Temple of Hera on Samos was the largest in the Greek world and it along with the Temple of Artemis at Ephesus were major influences on the temple we are headed to see in Didyma.

Years ago I visited Didyma in a rental car with Alison and another couple on a trip I organized that also included the ancient sites of Miletus, Prienne, and Knidos. The first thing I noticed on this return visit is how much Didim has grown. What I remember as a sleepy little town is now a bustling city with this quite interesting Ataturk monument on the main boulevard leading into the city centre. Virtually every Turkish town and city has some type of monument to Ataturk, mostly statues, but this one, which only becomes apparent from certain angles, is quite unique. 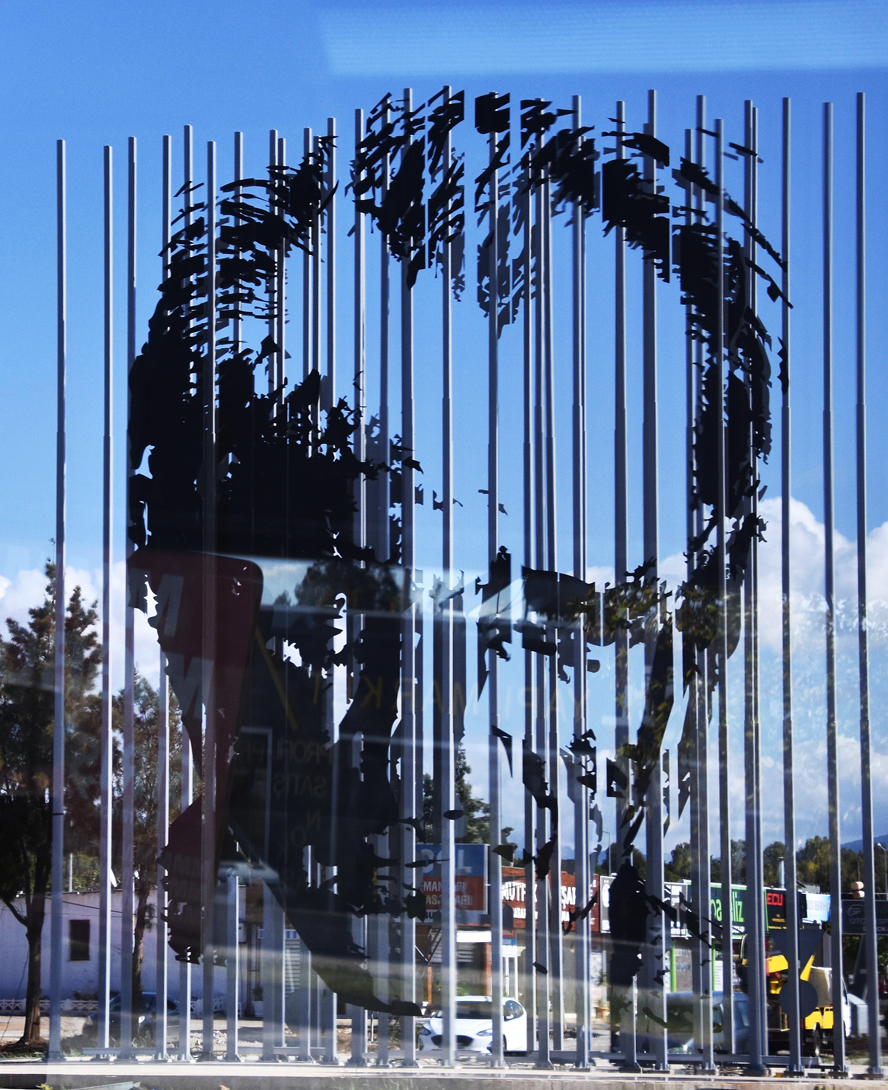 History of the Oracle of Apollo at Didyma

Oracles were of great importance in the ancient world and the one at Didyma pre-dated the arrival of the Greeks by many centuries. Unlike the oracle of Delphi which was founded at a spot where sulphurous fumes emerged from the earth, the oracle of Didyma was associated with an ancient spring. Some sources I've read claim that this was the spot where Zeus seduced the Titan Leto and where the offspring of that union, Apollo and Artemis were born. The name Didyma actually means 'twins'. This is contrary to the usual birth site of the island of Delos in the Cyclades, but the origins of every oracle are usually (cliché alert) ' shrouded in mystery'. Originally a priestess would sit near the spring and utter prophecies which in turn were 'interpreted' by a member of the Branchid family who claimed descent from Branchus who was a shepherd who had a love affair with Apollo. Apollo favoured Branchus with the gift of prophecy and he allegedly founded the oracle at Didyma.

Whatever version is correct, this was a sacred site attracting pilgrims from around the Mediterranean and Asia Minor for centuries before the Persians led by Darius torched the place in 494 BCE and marched the Branchus priests off to his capital at Susa. Legend has it that after this the spring dried up until Alexander the Great retook the area in 334BCE. It was after this that the great Temple of Apollo at Didyma was constructed and it is the remains of that temple that we are headed for today. The oracle was located inside the temple and operated for a further seven hundred years until the Byzantine Emperor Theodosius ordered it closed.

The temple itself was enormous, twice as large as the Parthenon and exceeded in the Greek world only by the Temple of Artemis at Ephesus and the Temple of Hera on Samos. However, whereas there is almost no trace of the other two giant temples, Didyma is in reasonably good shape.

While Alison and I were visiting the Istanbul Archaeological Museums we came across a mural that depicts the Temple of Apollo at Didyma as it would have looked around 2,000 years ago. 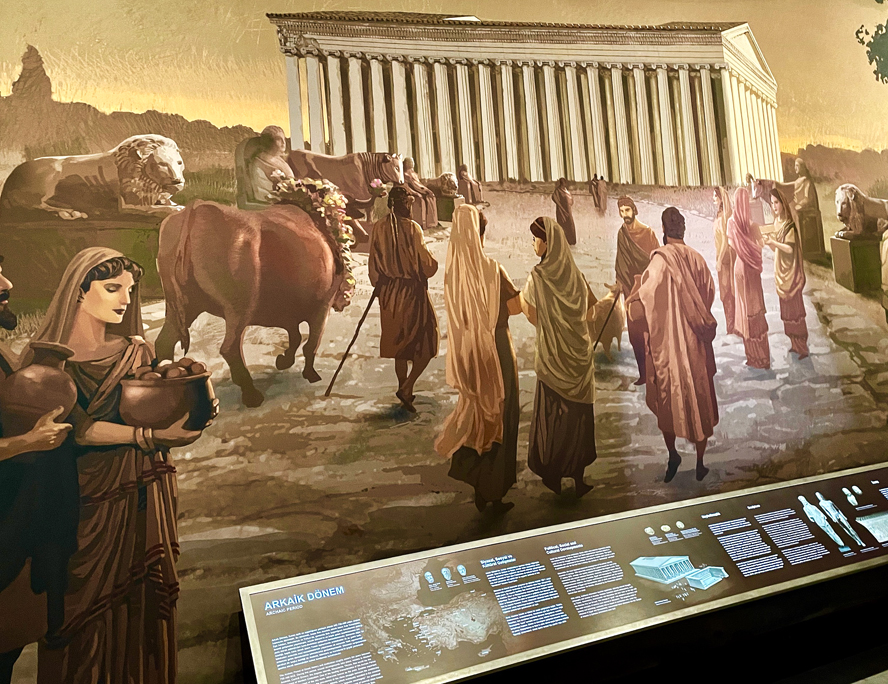 Visiting the Temple of Apollo

After passing through the main part of the city of Didim we come to a decidedly less busy part of town where our driver Ahmet parks the bus and Yasemin leads us toward the temple. On the way, we pass by the site of the Sacred Way that once connected Didyma to the city of Miletus, some 16 km. (11 miles) away. Didyma was never a large settlement, much as Delphi was not. Every year pilgrims would walk this road to assemble at the temple for sacrifices and I presume to get prophecies. There is a definite aura of ancient mystery about this place that I did not get at Ephesus or Pergamon which while amazing, were for practical purposes, huge cities. Didyma is the opposite; a sacred place in which the passage of time really has not diminished its impact. 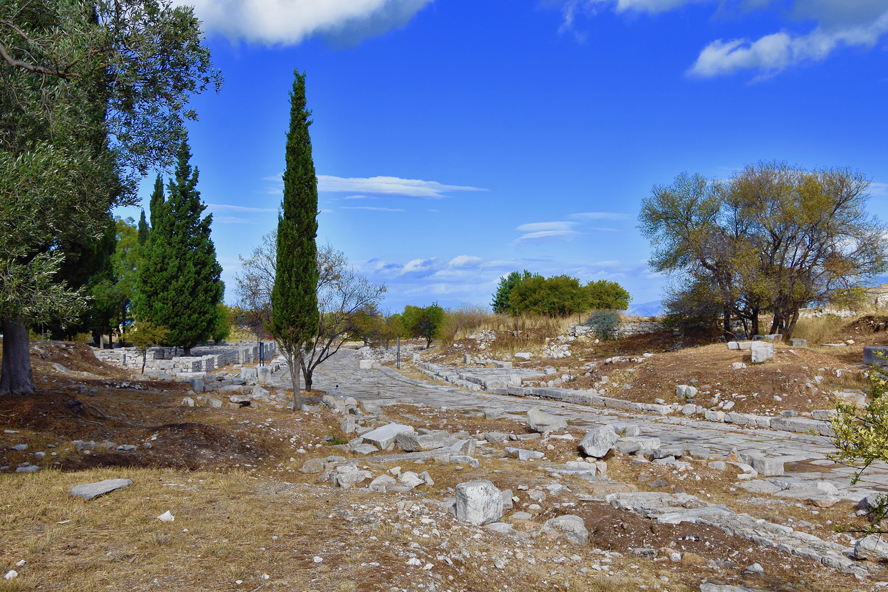 The Sacred Way from Didyma to Miletus

The first view of the Temple of Apollo at Didyma is one you will never forget. It is gargantuan in scale. Look at the size of the two people in the foreground to realize just how tall those columns are. What this place must have looked like when all 122 columns were standing and topped by a coffered roof. And once again you can see that this place, like most others we have visited so far, is not exactly overrun by tourists. In fact, there might have been only a half dozen or so besides our group. 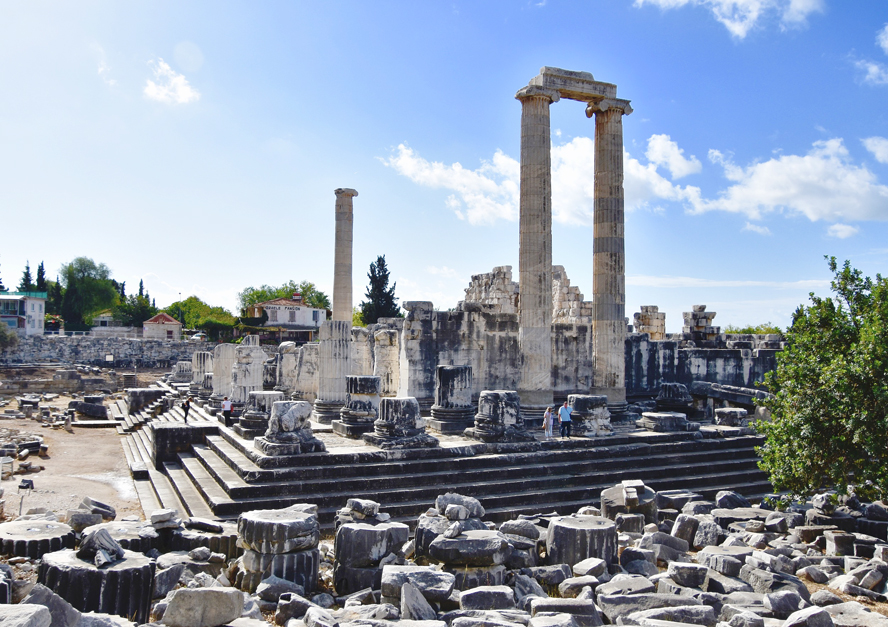 First View of the Temple of Apollo

From the slightly elevated spot where you enter the grounds of the temple, you descend steps to the ground level where two of the most famous sculptures in antiquity are located. These are the two medusae of Didyma which once were part of the temple's frieze. I have heard it suggested that the medusa below was really actually a portrait of Alexander the Great and it certainly bears a resemblance to other portraits of him. 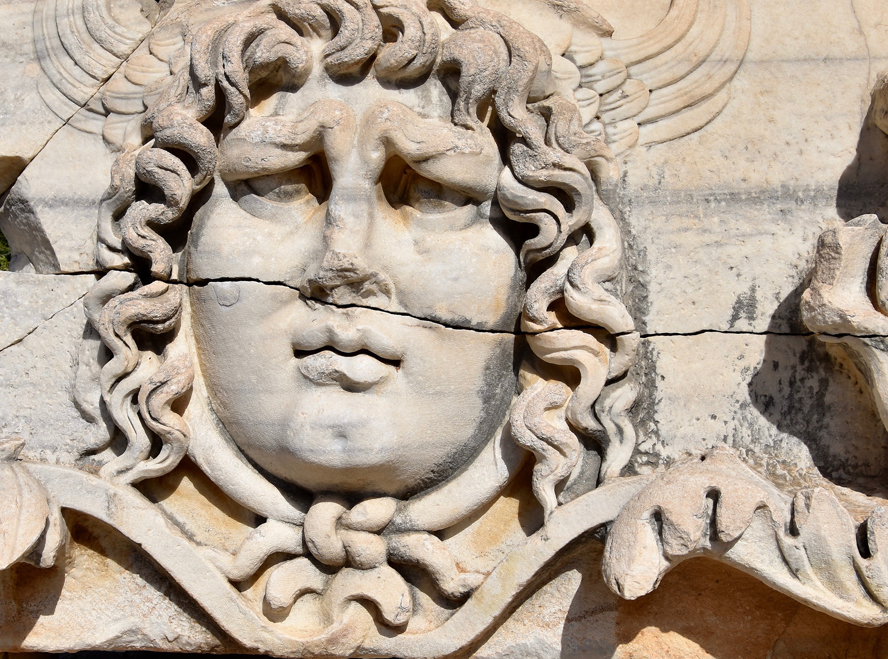 Medusa of Didyma or Is It Alexander?

The second medusa could not be confused with Alexander, but maybe Phyllis Diller. 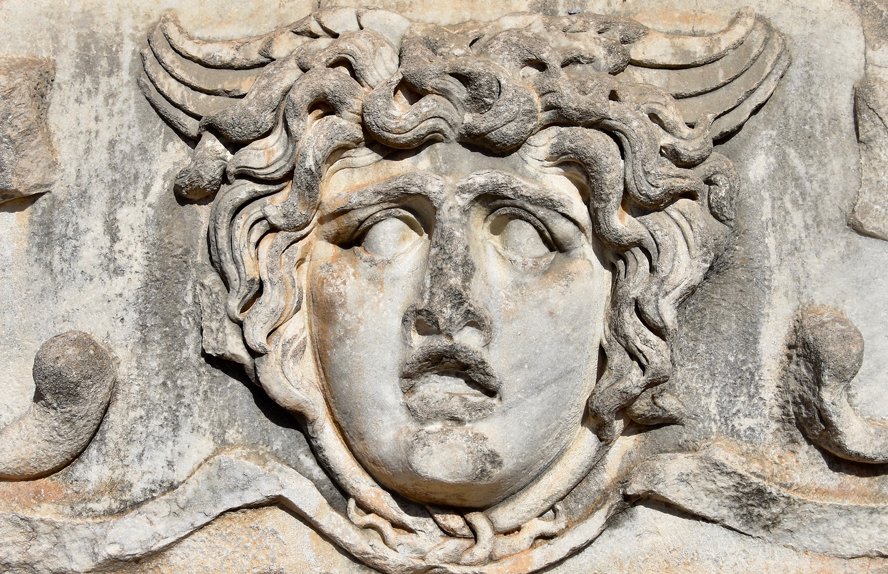 Also down here among a huge jumble of collapsed columns is this statue of a lion which looks like it was the model for the one in the mural above. 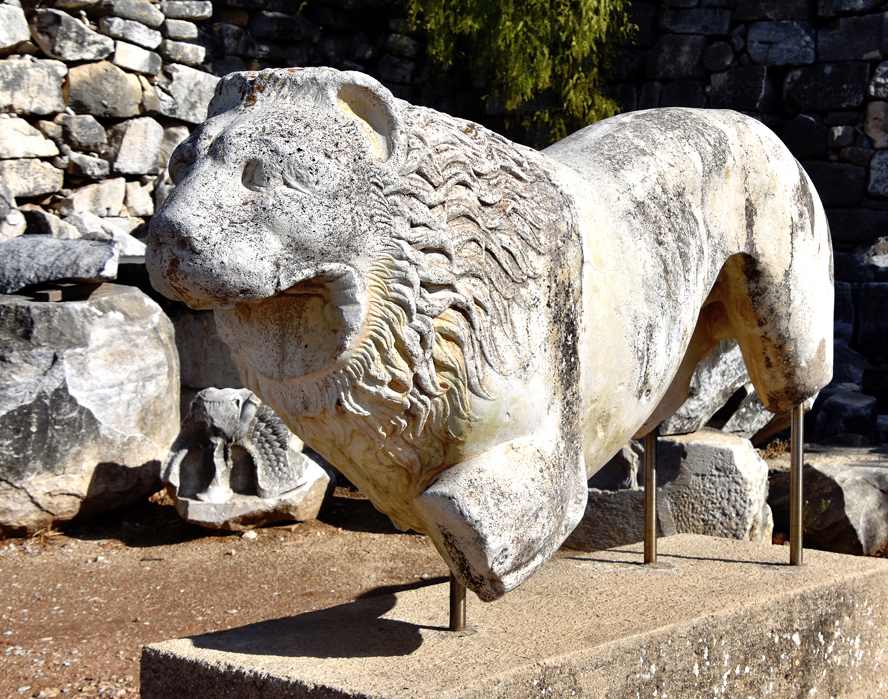 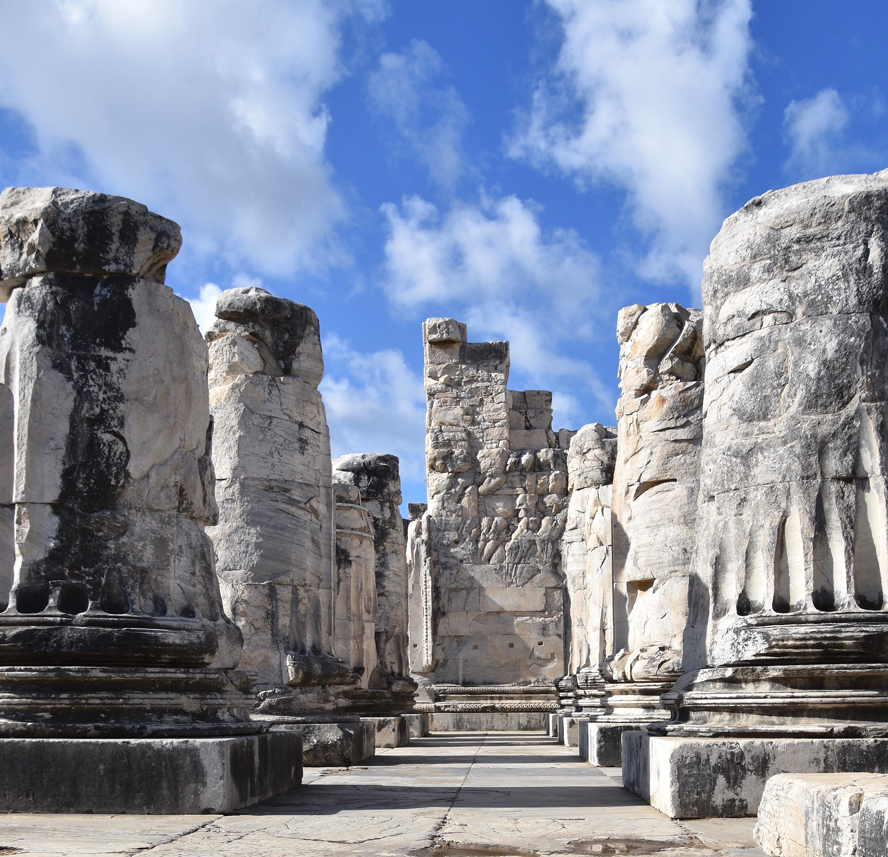 Despite the fact that it was famous throughout the Greco/Roman world and visited by many famous people like Julius Caesar, Caligula, and Trajan, historians are not actually sure how the resurrected oracle of Didyma actually did its oracular deeds. Yasemin explains that what follows is really a best guess as she leads us into the temple proper, pointing out numerous carved details on the pillars like this hippocampus. 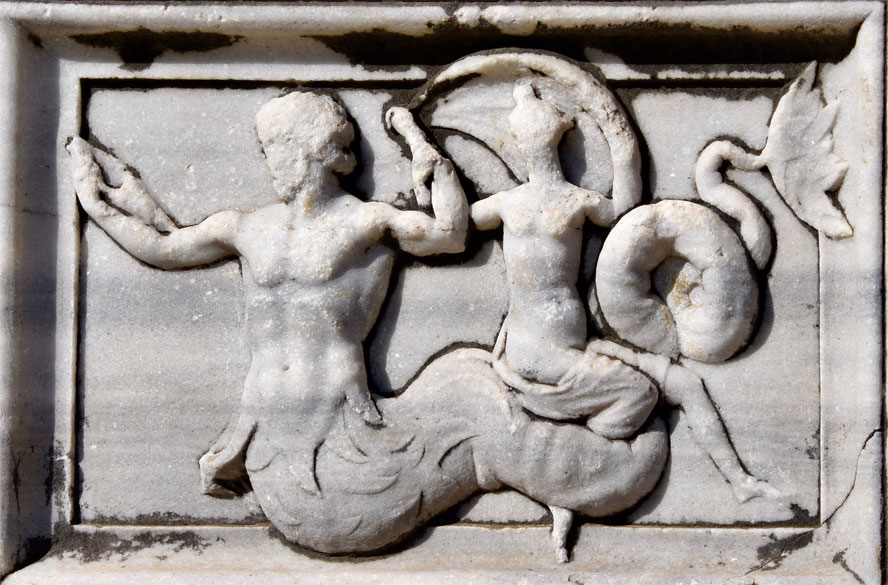 And this intricate scrollwork. 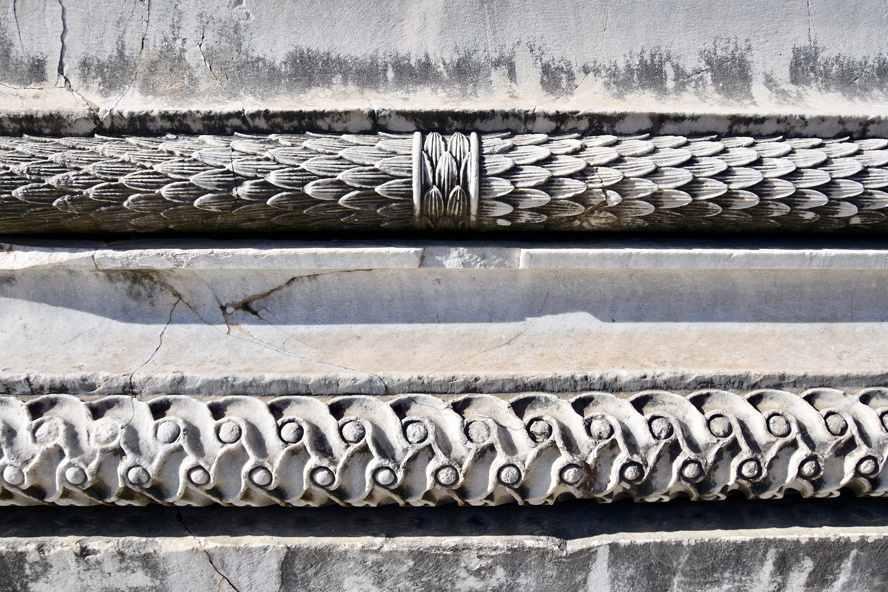 Designs at the Base of the Columns

We then look down upon the massive open area of the Temple of Apollo which is called the Didymaion which is where it is believed the actual oracle was based. 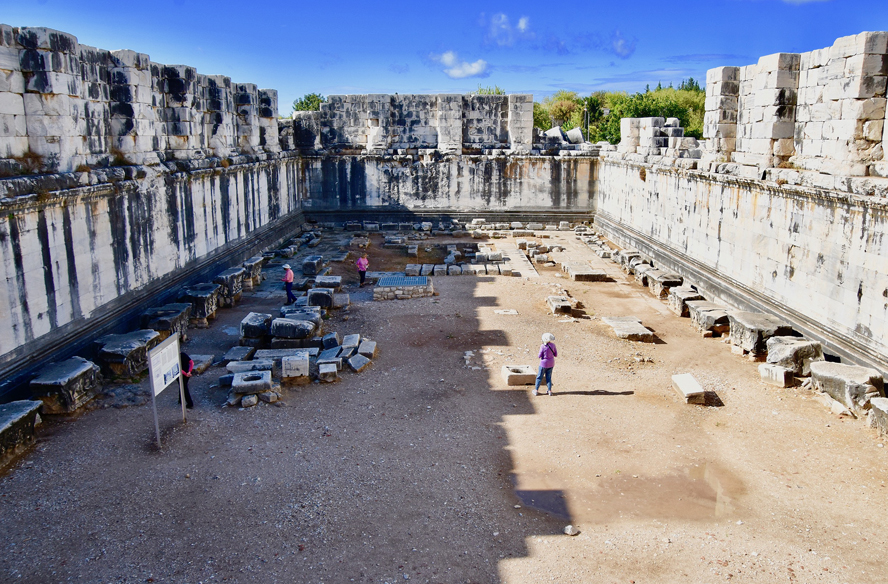 Once you descend the steps to the floor you can see a long hallway that led to the sight of the sacred spring and where requests for prophecies would be taken by the temple administrators. How these priests received the prophecies and from whom is unknown. They would then presumably return with the answers and parlay them to the waiting supplicants who paid handsomely for these services. 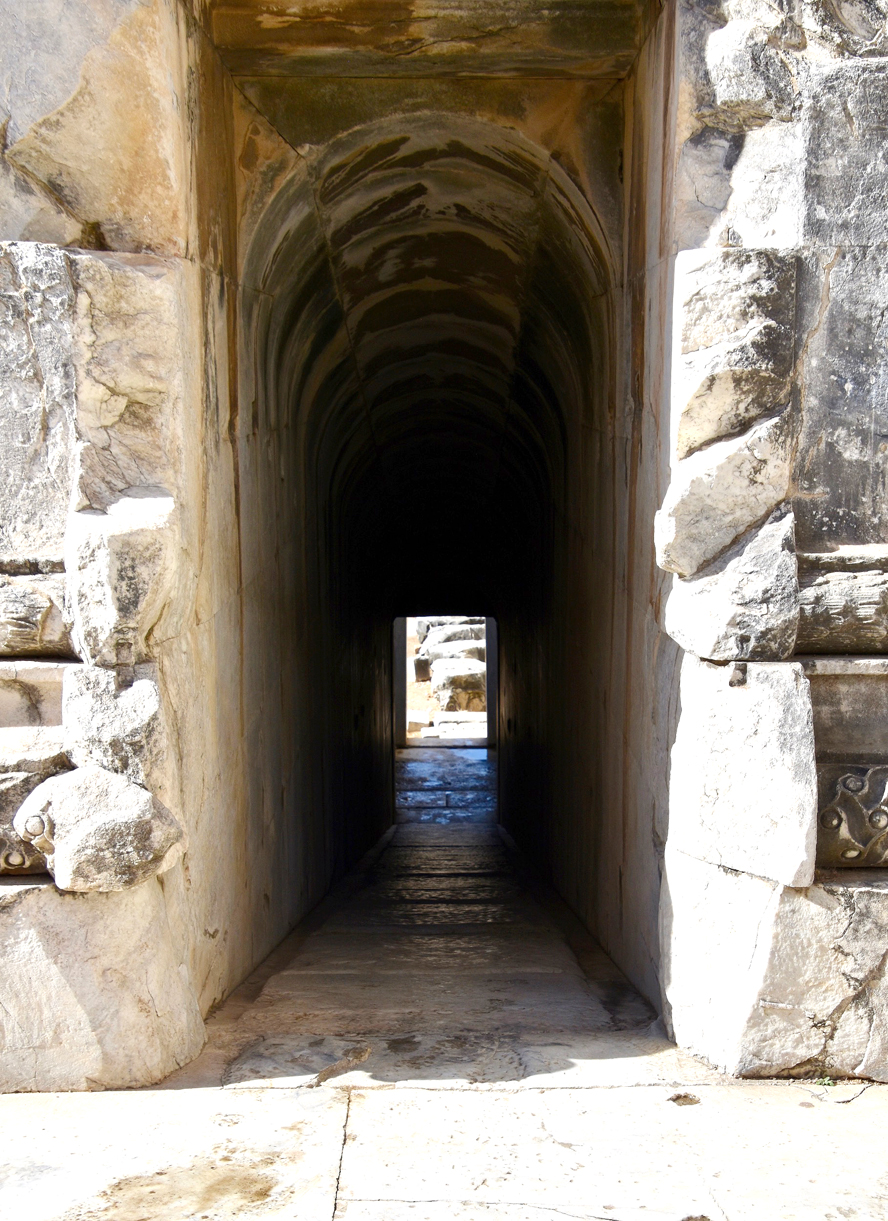 Entrance to the Oracle 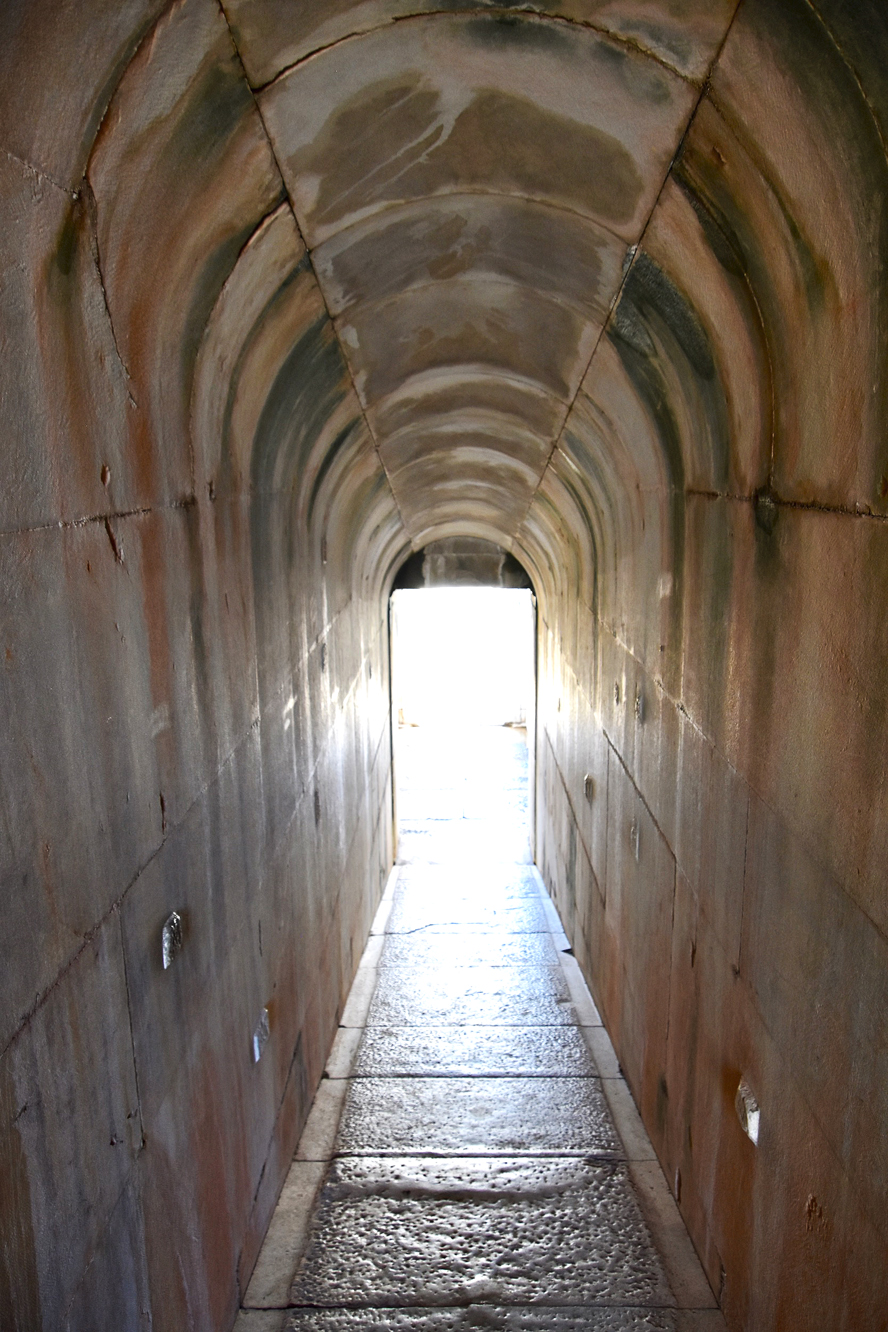 Walking Toward the White Light with the Answers

After touring the Didymaion we were free to explore on our own which for most meant taking a walk around the base of the temple. These are the walls of the Didymaion from the outside. Once again only by looking at a human figure can you get an idea of how big these walls are. 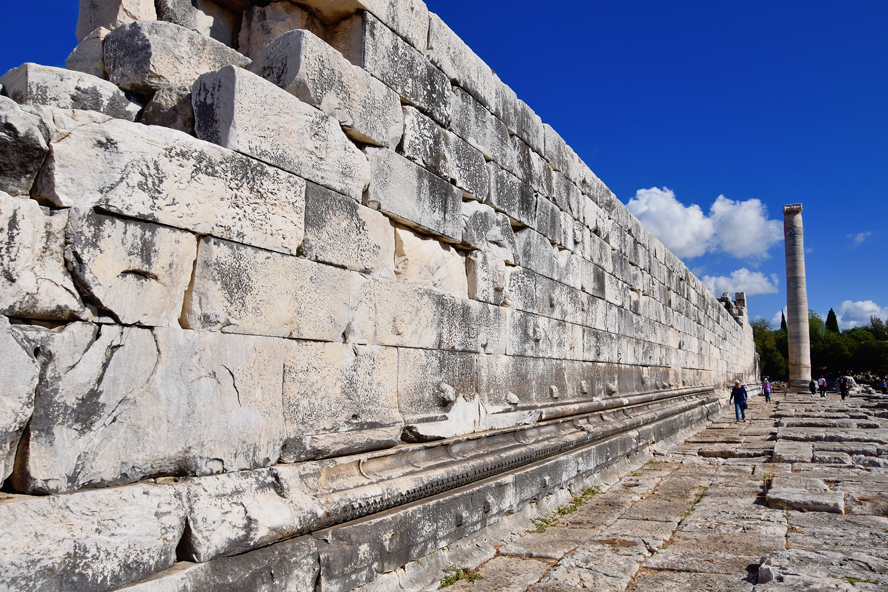 However, the real stars of Didyma are the columns and they are as impressive in a fallen state as those few still standing. 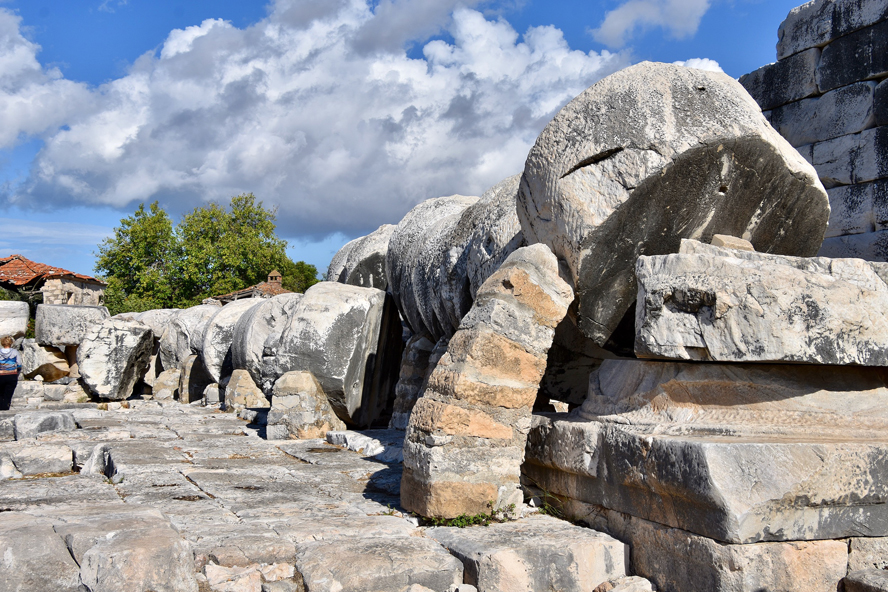 Or in an unfinished state. The columns were made of circular blocks which Yasemin explained did not have the familiar striations which were added from the top down once all the pieces were in place. Since the Temple of Apollo at Didyma was technically never completed it has provided archaeologists with many answers as to how these structures were built, based on unfinished portions like this column.

Standing underneath the only two columns connected by a lintel and looking up is worth going to Didyma for alone. It is like looking at the pure essence of classical Greek architecture. 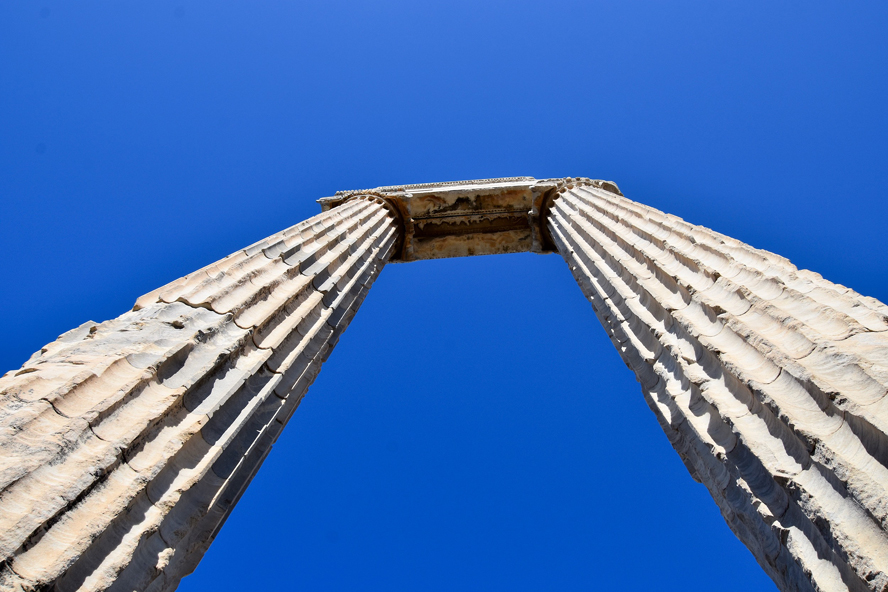 Looking Up at Didyma

These are the largest remaining standing columns in all of antiquity and they are truly awe-inspiring. 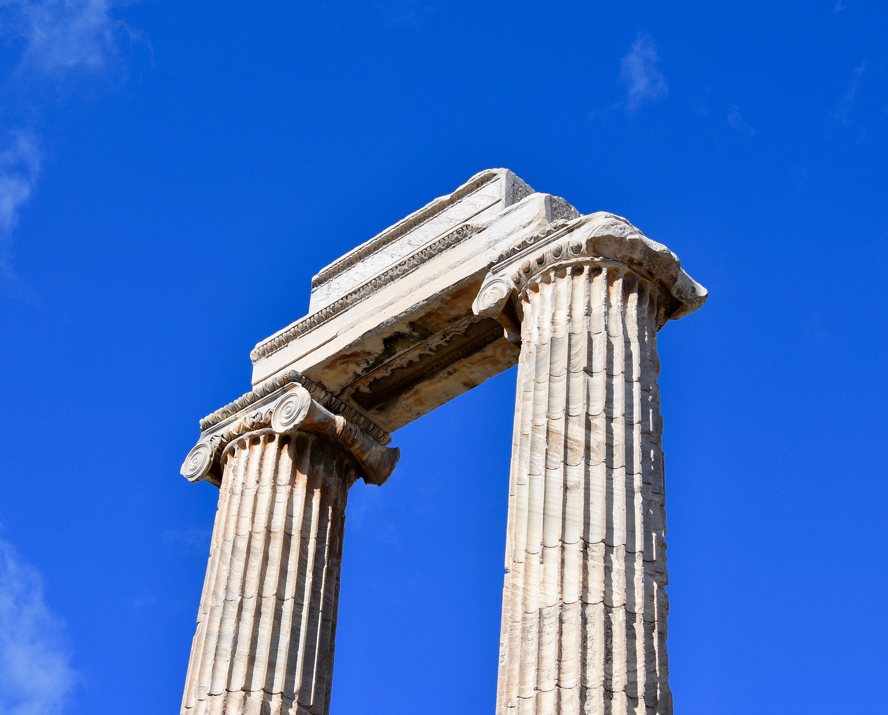 Well, that concludes our visit to the Temple of Apollo at Didyma. I hope you enjoyed it as much as I did and that it inspires you to come here one day and see it in person. You surely will not be disappointed.

Next we head for a two day stay in Bodrum, home to Herodotus, the father of history and one of the Seven Wonders of the Ancient World. I hope you'll join us there.