Sometimes the most impactful parts of the journey are getting off the beaten path and discovering what real life is like. We're excited to share the next chapter from Dale of The Maritime Explorer on our Colombia and Panama tour.  Check out this link for more info on this Colombia tour.

One of the reasons I consistently like to travel with Canadian tour company Adventures Abroad is that they make a real effort to get you off the standard ‘tourist’ itinerary followed by most of their competitors. Because the size of the group is small it is possible to get to places and experience things that are simply not practical for larger groups.

Today was a great example of this as we visited the small village of Palenque de San Basilio, about an hour and half outside of Cartagena. We were all able to fit into the small living room of our local host and then follow it up with a personal performance by the greatest living practitioner of the Son Palenquero music genre, which originated here. Won’t you join us to find out why Palenque de San Basilio is a truly unique place in Colombia.

Not to be confused with the ancient and abandoned Mayan city of Palenque in Chiapas, Mexico, Palenque de San Basilio is a completely different type of place. It is very much alive and for a community of less than 4,000 souls it has an incredible number of achievements and firsts, including being the oldest African-American settlement in the New World. Here’s how that came about.

After Columbus stepped ashore in the New World in 1492, it didn’t take long for the Spanish to pretty well wipe out the entire native population of the Caribbean either through disease or by working them to death as slaves. Looking for an alternate supply of free labour they turned to the African slave trade which had existed as far back as Roman times.

The first Africans were transported to Colombia via Cartagena in the 1520’s and the first slave revolt happened only a decade later and became a common occurrence at regular intervals for the next three hundred years. Benkos Bioho, alleged to be an African king, was brought as a slave to Cartagena in 1599 and promptly escaped into the swampy jungles surrounding the city with a number of followers.

A master at eluding his Spanish pursuers, he established a palenque or fortified settlement at present day Palenque de San Basilio which soon became a safe haven for escaped slaves from the entire Caribbean coastal area of Colombia. Benkos was such a good guerrilla leader that in 1605 the Spanish signed a peace treaty which lasted for sixteen years.

Then, Europeans doing what they almost always did with respect to treaties, broke it, captured Benkos and hanged him in Cartagena. Rather than cow the rest of the palenqueros, it just upped their determination to remain free and for the next seventy years they fought a continuous guerrilla war against the Spanish. Finally in 1691 the Spanish called it quits and the palenqueros have been free ever since.

One of the first things you see on entering the town is this riveting statue of Benkos Bioho removing his chains and reaching east towards Africa. 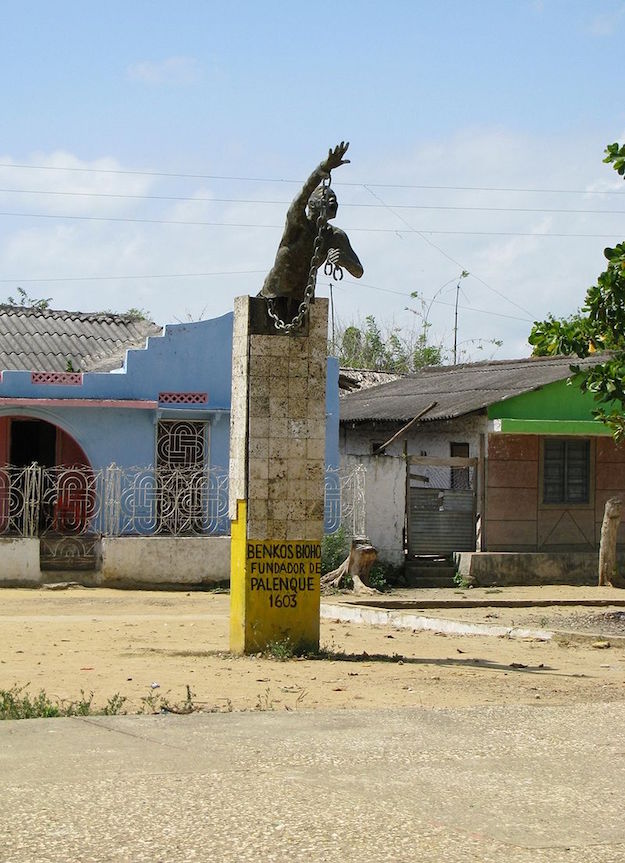 Benkos Bioho was said to be an African king, and arrived in Colombia in 1599.

Now think about this – the palenqueros have been living in Palenque de San Basilio for longer than any permanent English or French settlement in Canada or the U.S. It’s older than Quebec City (1608), Jamestown (1610), Plymouth (1620) and New York (1624). In that time the people have developed their own language, religion, music and economy that is culturally unique – so much so that in 2005 UNESCO listed Palenque de San Basilio as a Masterpiece Of Oral And Intangible Heritage Of Humanity Sadly, it is the only palenque community that has survived intact to the present day so it is truly a one of a kind destination.

Getting to Palenque de San Basilio from Cartagena is a lot easier today than it would have been for Benkos Bioho and his followers. We follow a good paved highway for most of way until turning off onto a dusty narrow road that leads to the main street of the town. After passing the statue of Benkos we stop at the small plaza and disembark where this monument proclaims 2015-2024 as the International Decade of African Descendants. 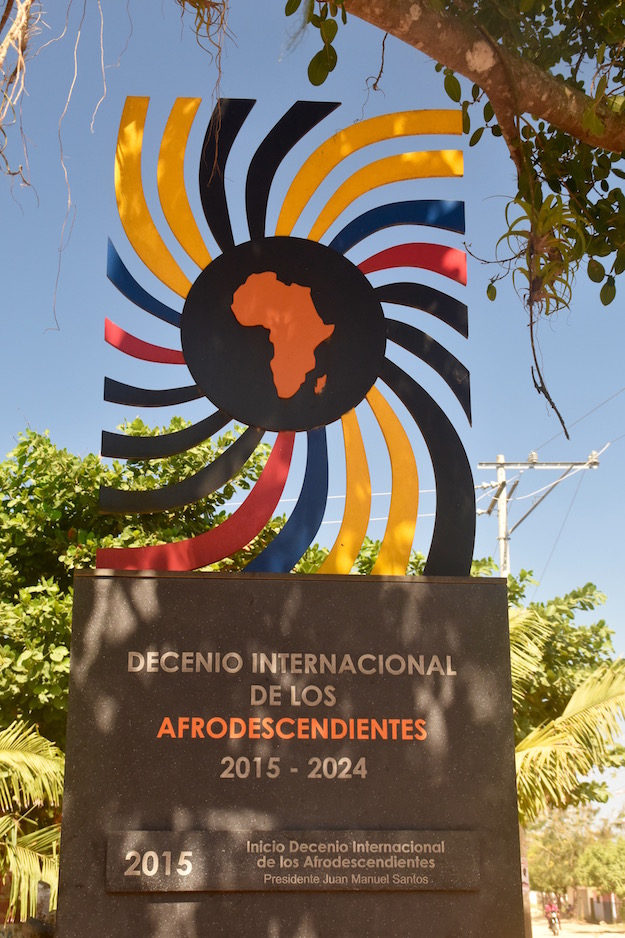 We also promptly become the centre of attention for the many kids milling around the plaza on bikes, most of them too big for their small riders.

What I don’t see anywhere in the town are any of the palenqueras that are found everywhere in the tourist sections of Cartagena. These are the women, originally from Palenque de San Basilio, who wear bright dresses, often in the colours of the Colombian flag, and carry insane amounts of fruit on the top of their heads. For a few Colombian pesos or about a buck, you can have your picture taken with them, but frankly, I find that a bit demeaning so I’ll settle for this picture from the entrance to the Bantu Hotel in Cartagena. 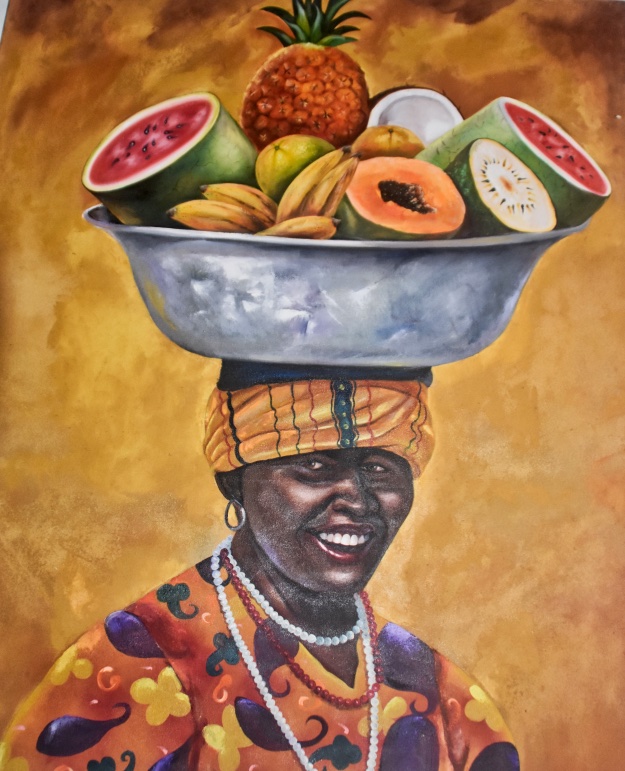 After a few minutes our tour leader Andres Fernandez introduces us to our local guide who will give us the history of Palenque de San Basilio and show us around. Now I should make it clear that this place is not going to win any civic beauty awards. It’s clearly a poorer community compared to any others we have visited in Colombia, except maybe Commune 13 in Medellin, and I’m not even sure that all the houses we passed had electricity or indoor plumbing. 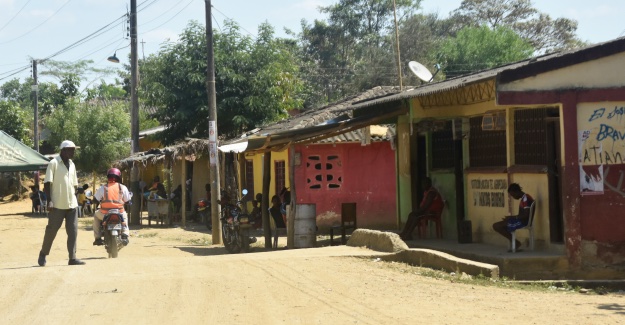 There are a few pigs foraging around.

And some people arriving in town by horseback. 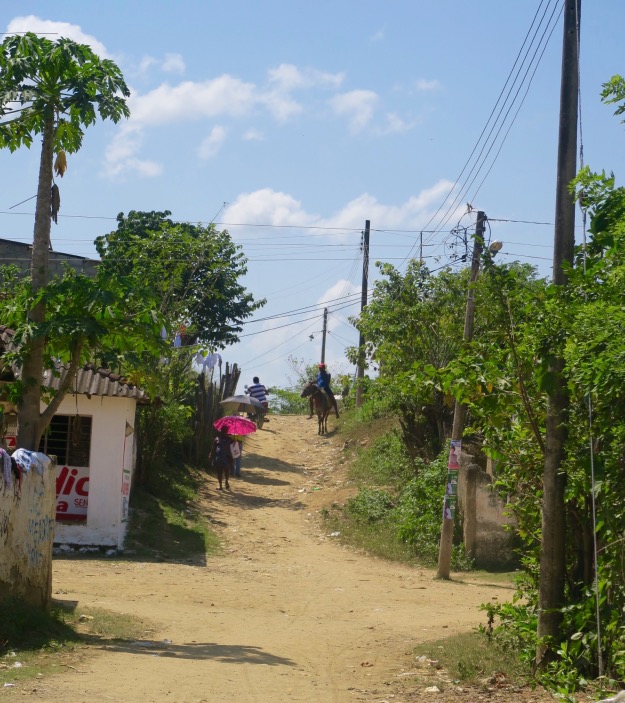 Coming to town by horse is not uncommon here.

I’m not going to speculate as to why Palenque de San Basilio is devoid of many of the things that other Colombians now take for granted, but I do have to ask myself if there is a lingering ‘us vs. them’ attitude among the decision makers on who gets a paved road or a sewage treatment plant and who doesn’t. In any event, there is clearly a pride in the residents at who they are and where they came from as evidenced by this building.

We now enter our guide’s home where we all take seats in his living room as he first offers us all a morning nip of rum in a crescentia nut shell.

Alison finds it quite to her taste.

It is here that we are told the history of Palenque de San Basilio which I have narrated above and it is fascinating. About half the people in the town can still speak Palenquero which is the only South American language that derives from a combination of Spanish and several African dialects. Also, because the original escaped slaves had spent little time in captivity, they were never forcibly converted to Catholicism and continued to practise the religions of Africa.

However, over four hundred years Christianity did mutate with these religions to form something unique to palenque communities. Counter intuitively, a death was celebrated because the deceased person’s spirit would be free and return to the African homeland while a birth was mourned as the beginning of a life of misery far away from where the person should have been born.

We then returned to the main street and continued our tour, passing this lady who was grinding rice with with a traditional wooden pestle, not for the benefit of tourists, but because that’s the way it is still done in Palenque de San Basilio.

As everywhere, little children love to be made a fuss over and are not camera shy.

Another famous resident of Palenque de San Basilio is Antonio Cervantes, aka Kid Pambele, the first Colombian to ever win a world boxing title. He was world Jr. Welterweight champion, had sixteen successful title defences and ranks 50th on Ring Magazines greatest boxers of all time. This is his monument. 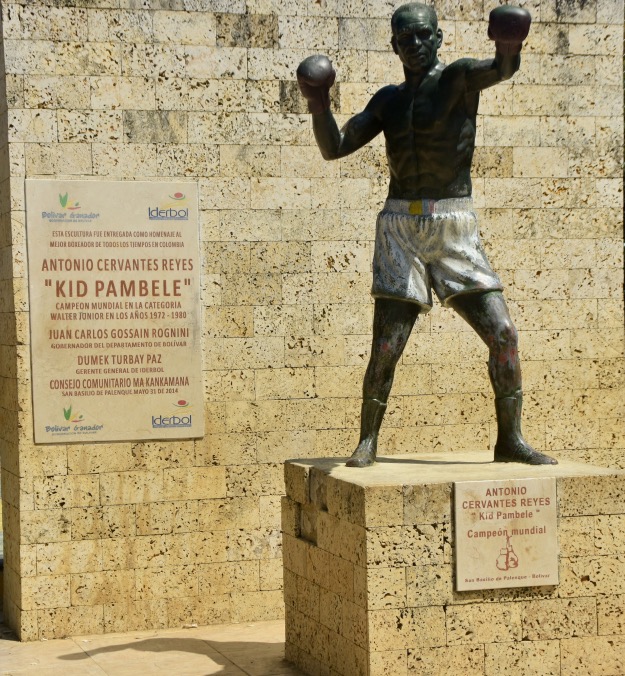 One of the famous residents of Palenque de San Basilio is boxer Antonio Cervantes, also known as Kid Pambele. He became World Junior Welterweight Champion in 1972.

Our final stop in Palenque de San Basilio was at the home of a genuine living legend and one that I’m embarrassed to say I never heard of before today. Now that I know of his accomplishments, I am humbled that he agreed to meet and play for us. This is 83 year old Rafael Cassiani playing the Marimbula.

Rafael Cassiani of the Sexteto Tabala playing the marimbula.

He is the current director of Sexteto Tabala, a group that started in Palenque de San Basilio in 1930 and is now in its fourth generation. They have literally played all over the world including my native Canada which Rafael remembered as being ‘cold as hell’.

They play traditional instruments and have created a distinct sound. Take the time to watch this video and you’ll realize why being invited into this man’s home was perhaps the highlight of the entire trip to Colombia.

Lest you think a guy in his mid-eighties can’t get people up and dancing, look at this. 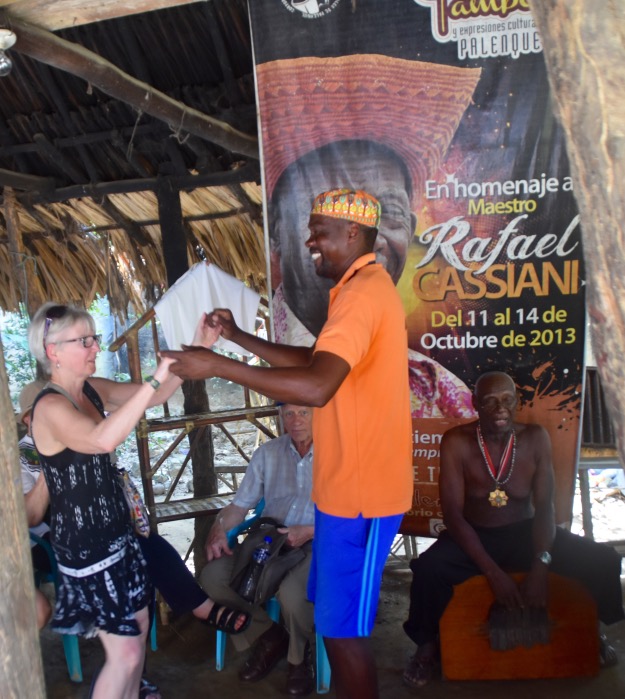 Dancing to the music of Rafael Cassiani of Sexteto Tabala.

We returned to our bus and as I boarded I bought some home made sweets being offered for sale and boy were they sweet! I was on a sugar high all the way back or maybe I was just contemplating what a really interesting place we had just visited. Palenque de San Basilio is unlike any place you will ever visit and I suggest getting there before the rest of the world finds out.

Thanks again to Dale of The Maritime Explorer for his insights and wonderful descriptions that allow us to follow in his footsteps. Find out more about this Columbia tour.

Published on 1 May 2018
< Jardin Colombia – Hard to Get To, But Worth the Effort
Cartagena Colombia’s Fantastic Caribbean Colonial City >
Recent Blog Posts
Phaselis - Romantic Forested Ruins by the Sea
Myra - Visiting the Home of St. Nicholas
Te Moana - A Great Introduction to Tahiti
The Turquoise Coast by Boat
Fethiye to Kas - Lycian Tombs and a Great Market
French Polynesia with Adventures Abroad
Can't find what you're looking for?