In his latest blog post, Dale Dunlop, The Maritime Explorer, ends the last day of his French Polynesian tour by experiencing Bora Bora by Boat and all the thrills it entails. If you are interested in what Adventures Abroad has to offer, please check out our Small Group Tours to French Polynesia.

Alas, this is my final post from our 2022 trip to French Polynesia with Adventures Abroad. Fittingly, it might well have been the most interesting day of the entire tour as we explored Bora Bora by boat and got the chance to swim with sharks and rays. Please join us in this Pacific paradise and find out why this was the perfect ending to a perfect trip.

In the first post from Bora Bora, we toured the island in Le Truck and got some great views of iconic Mount Otemanu, but our AA guide Martin Charlton tells us that views from the water are even better and I can't wait to find out. This is a map of Bora Bora and as you can see the island is almost completely surrounded by atolls creating a shallow lagoon which is teeming with sea life. Our trip today will take us completely around the island with multiple stops for snorkelling followed by a lavish lunchtime spread on a private motu, which is the Polynesian name for a small islet. 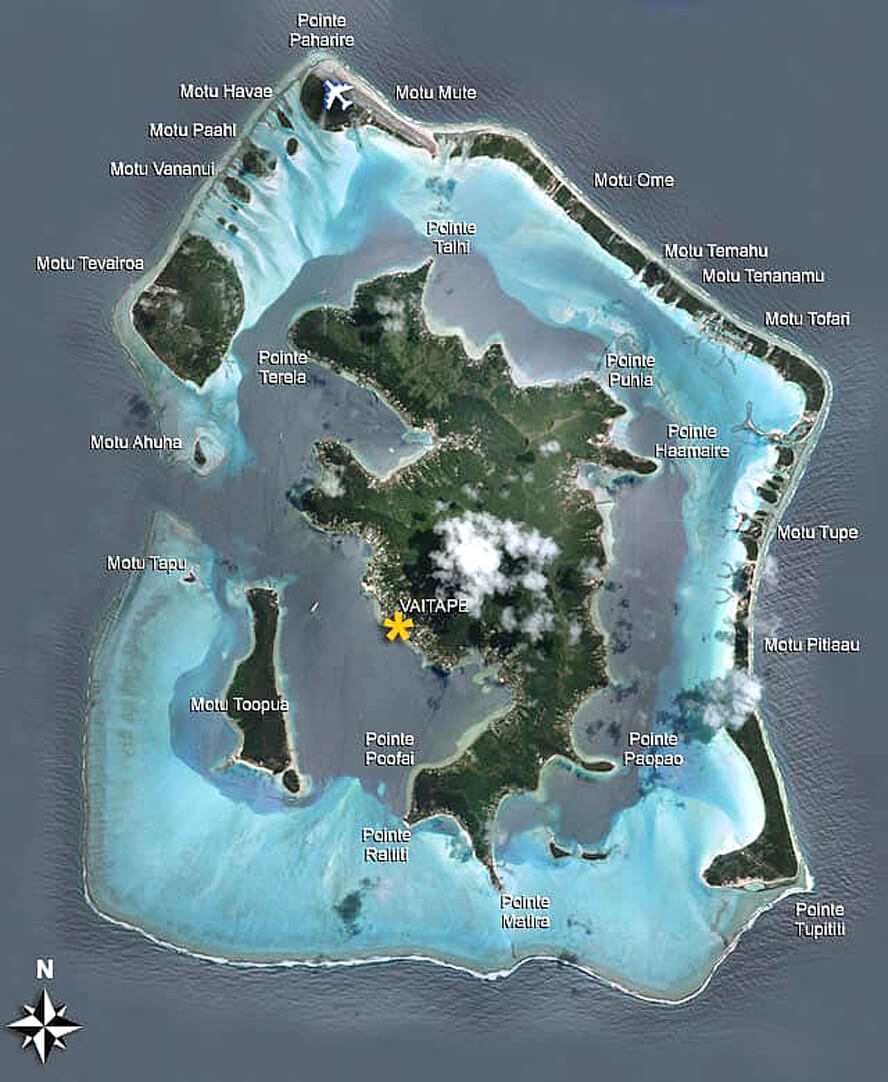 The Bora Bora by boat trip begins right at the dock of the Maitai Resort which is not far from Pointe Matira at the bottom of the map. Just after breakfast, two boats arrive and we split into two groups, eight in each boat. Our group has the very genial and entertaining Captain Mike. 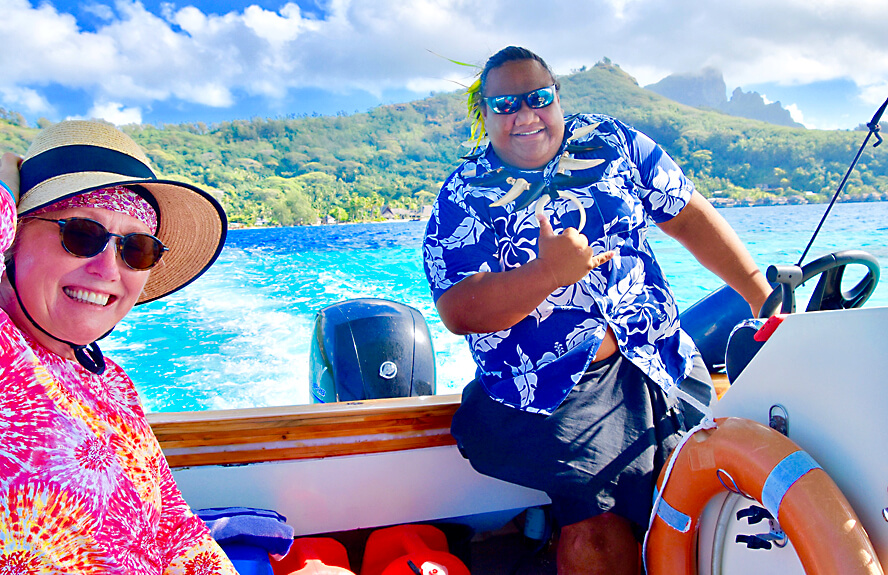 On the way to our first stop on the Bora Bora boat trip, he serenades us while plucking a Polynesian guitar that looks ridiculously small against his big frame. He has a surprisingly high sweet voice that reminds me of the late great Israel Kamakawiwo'ole aka IZ to whom he bears a passing resemblance.

Martin was right about the views. Mounts Otemanu and Pahia look great from the boat and probably even greater to the person parasailing overhead. 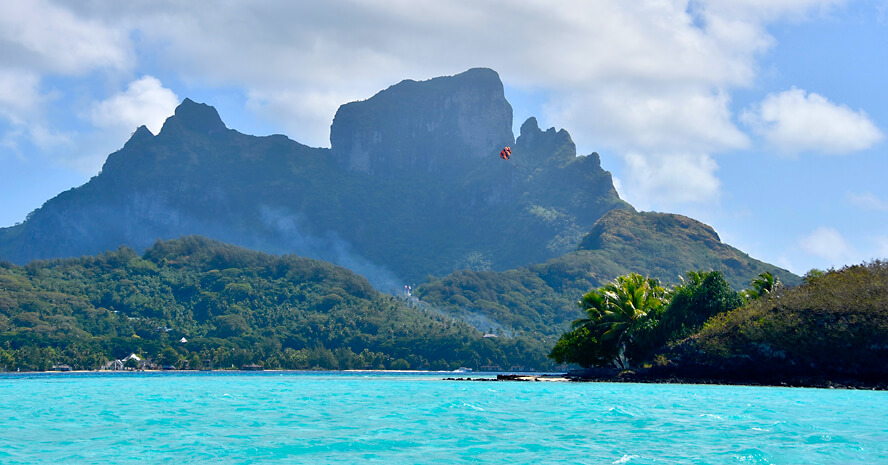 Mike points out the remains of the very first resort on the island, the famed Hotel Bora Bora which opened in 1961 and debuted the first over-water bungalows in Polynesia. It closed in 2008 as more upscale competitors copied its premise and drew away the rich and famous who were first drawn to this mainland location that is now just another abandoned property. 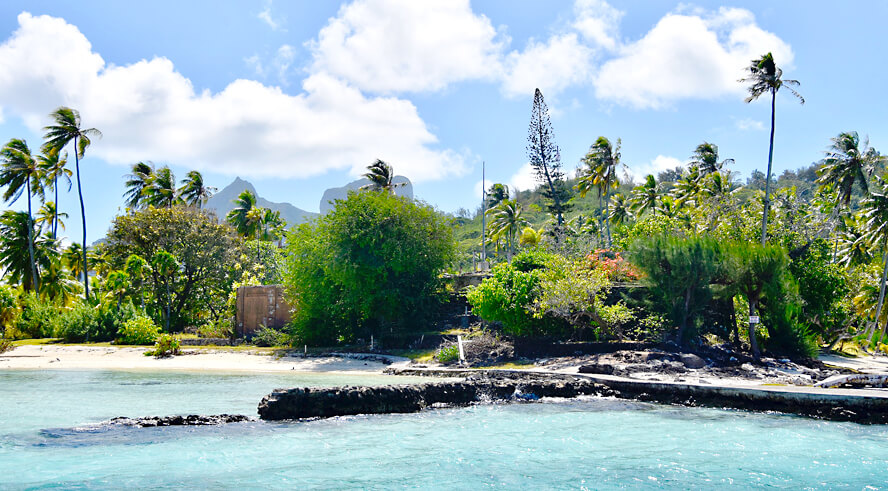 Remains of the Bora Bora Hotel

One of those successful competitors is the Conrad Resort which is where the Kardashians stayed in this $5,000 USD a night compound while filming three episodes of their wretchedly excessive TV show of which I have never watched a minute. 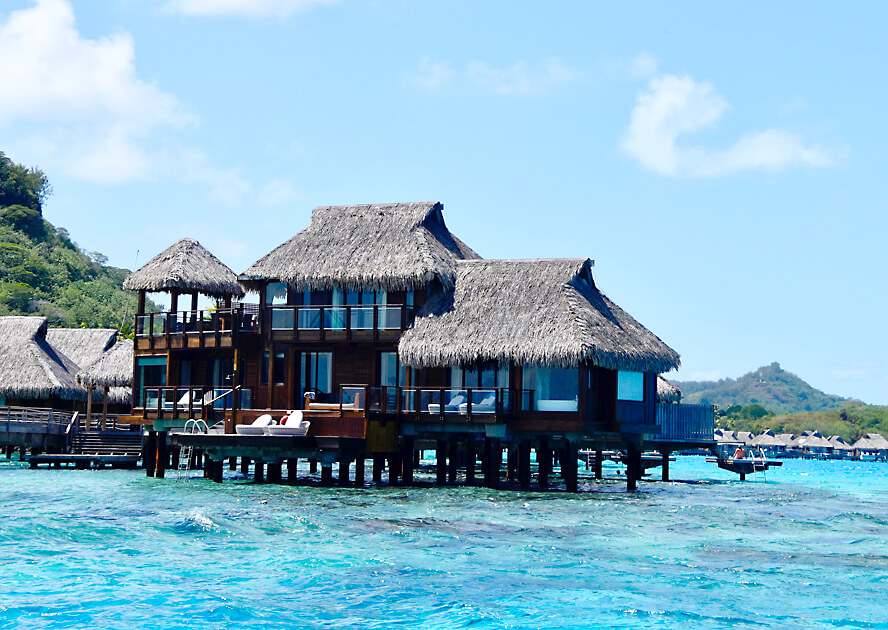 Here is another view of Mounts Otemanu and Pahia. Those dark shapes in the water are sharks and this is our first stop on the Bora Bora by boat trip.

Years ago Alison and I got into a cage off the north shore of Oahu and watched as Galapagos sharks eyed us from a few feet away. From the safety of the cage it was not very scary, but this morning we are going to forsake the cage and snorkel without anything between us and them other than a few feet of water. This is our sister boat with a lot of sharks circling both boats. I don't see anyone from it rushing to jump in. 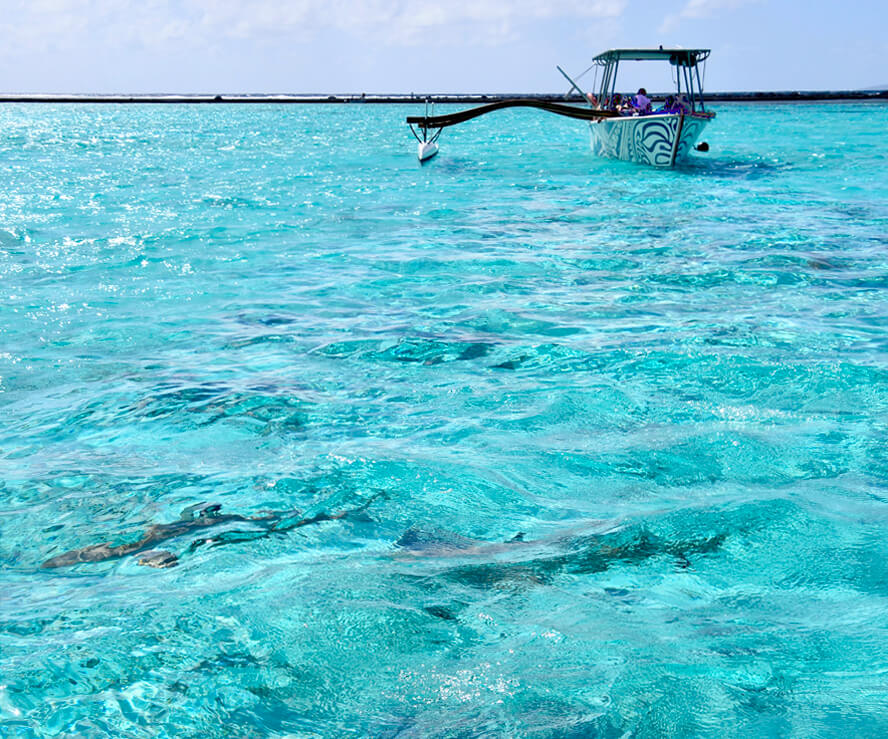 Captain Mike assures us that these black-tipped reef sharks are perfectly harmless and Alison and I are prepared to accept him at his word so we don the snorkelling gear and prepare to follow him in. 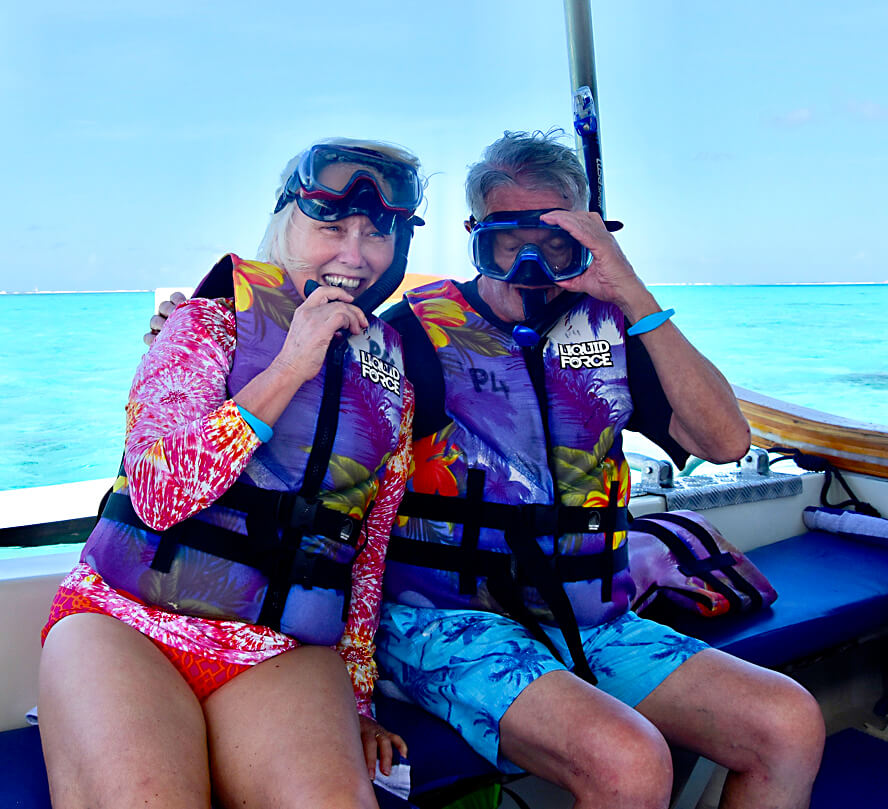 Ready to Swim with Sharks

The water is deliciously warm and incredibly clear and the sharks pass underneath us in about eight feet of water as we lie prone on the surface. There's one just underneath me in this photo. 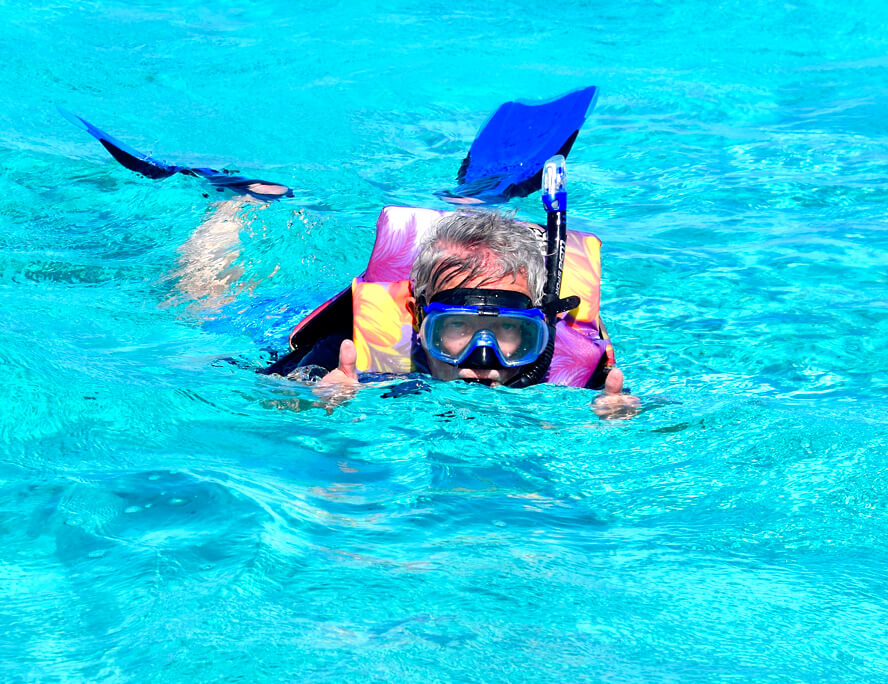 Snorkelling with Sharks in Bora Bora

Most of our group has joined us in the water and I got out to take this video that gives a better idea of the experience. No one who went in expressed any fear or regret and it was a totally thrilling outing.

Overall we were here about half an hour before Captain Mike pulled anchor and we headed for our next stop on the Bora Bora by boat trip. This time we will swim with stingrays which sounds just as preposterous as swimming with sharks. We all remember what happened to Steve Irwin, right?

However, Polynesians have had thousands of years of interacting with stingrays and for some reason, they actually seem to like human company. As soon as we are anchored at Stingray Alley they come to the boat in great numbers. 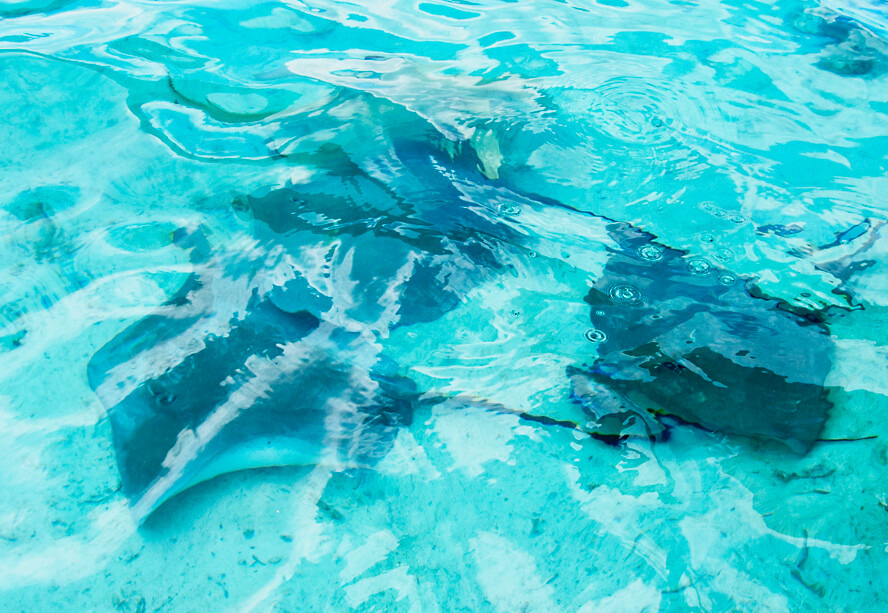 As do more sharks. 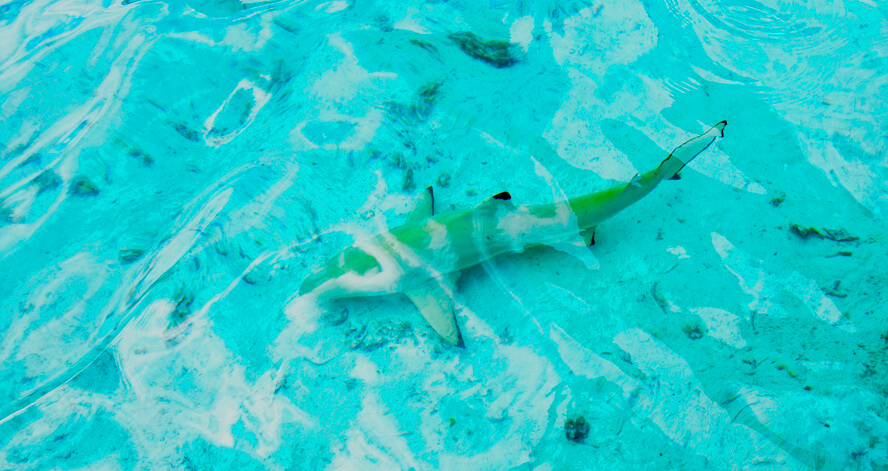 The water here is shallow enough to stand up in and Captain Mike demonstrates that there is nothing to fear from these gentle creatures as he pets one. That convinces most of us to join him including a few who didn't go in with the sharks. 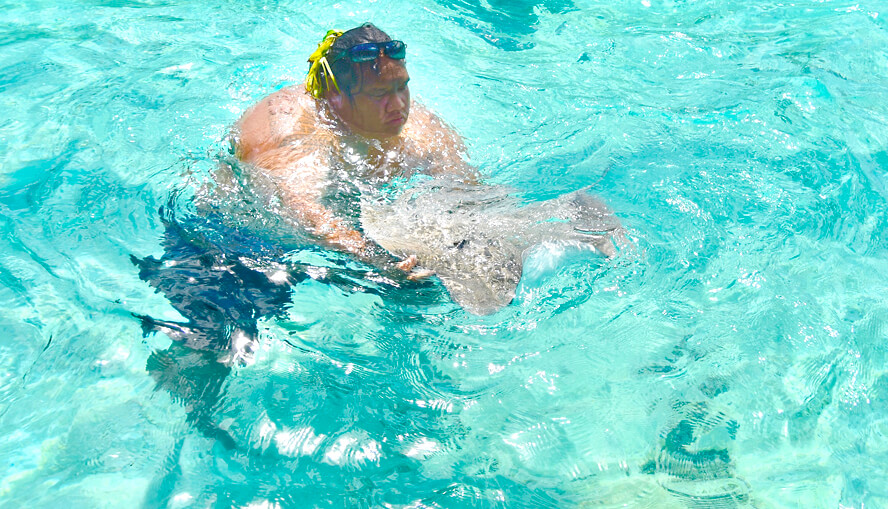 It's actually almost a spiritual thing with these stingrays as you can sense that they somehow feel a bond with the strange creatures who arrive each day and plunge in to be in their company.

After towelling off our Bora Bora by boat trip moves on to circle most of the island before our final stop. We pass the site where the first people ever to set foot on Bora Bora landed in the 4th century. 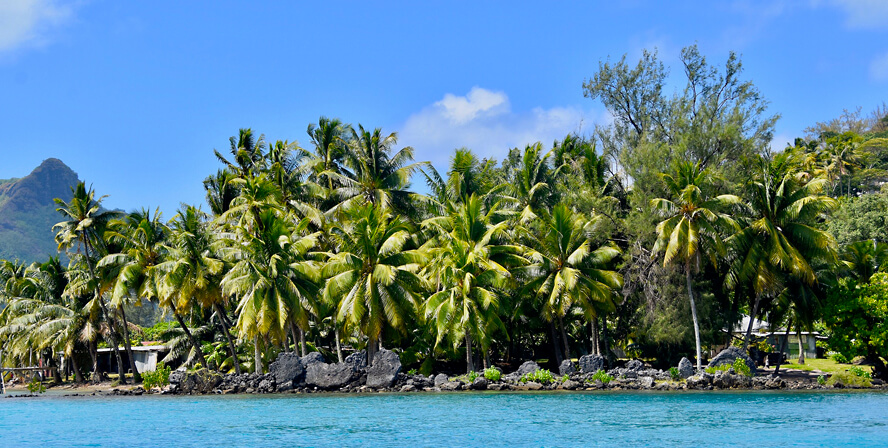 And the small port of Vaitape where one of the principal supply ships is docked.

We also pass the remnants of a WWII battery which was never fired in anger as the Americans arrived in French Polynesia before the Japanese got here. With over 6,000 troops stationed in Bora Bora, they were able to forestall any plans for a Japanese seizure. 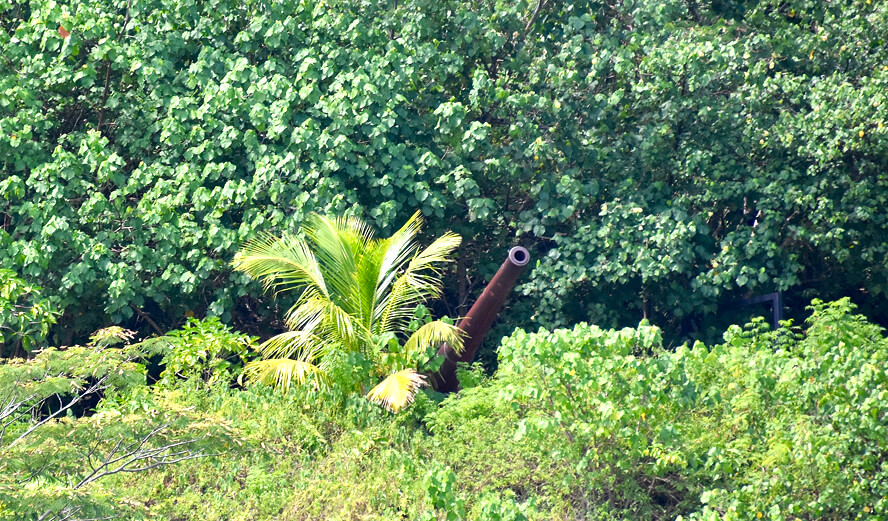 Our final stop on the Bora Bora by boat trip is on a small motu where the people from the other boat are already landed. Some of them wait to greet our arrival.

The motu is your atypical idea of what it would be like to be stranded on a deserted tropical island. There are coconut palms, lots of sand and clear water that is teeming with fish. 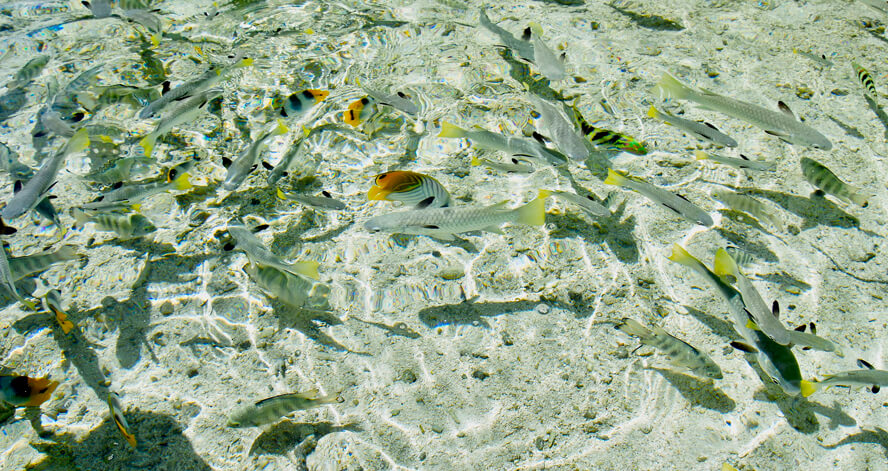 Fish at the Motu

What you wouldn't find on a deserted island is a ready-made buffet with delicious Polynesian specialties like poisson cru awaiting you along with an islander eager to serve you. 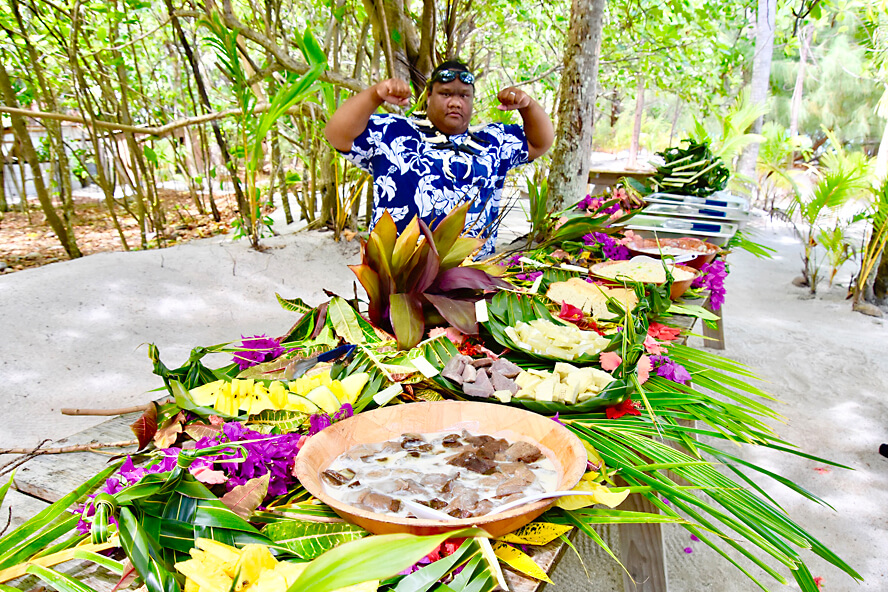 The dining setup on the Bora Bora boat trip is quite unique with picnic tables sitting in the water. 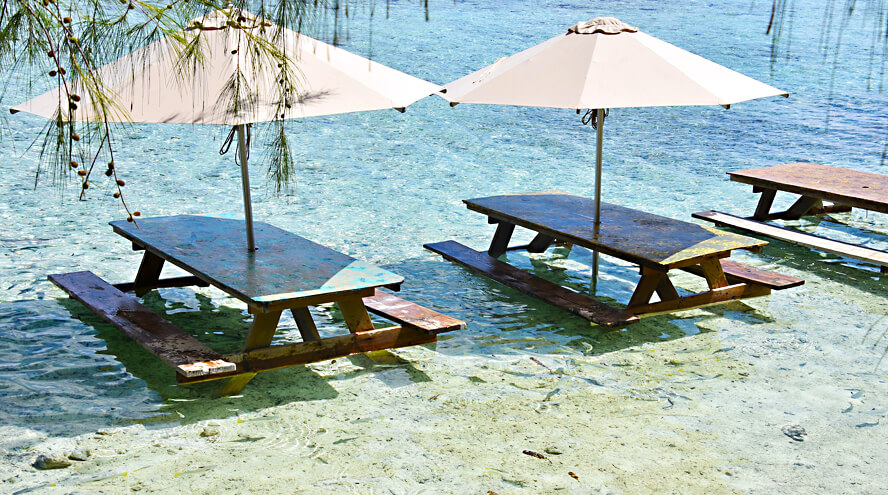 We get our food and head for the table. 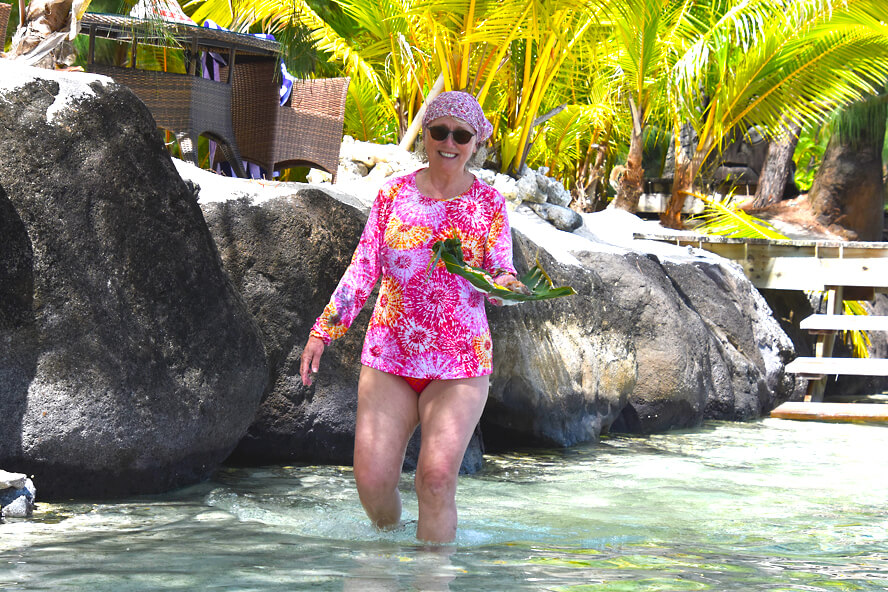 Alison With her Lunch

This is my lunch. 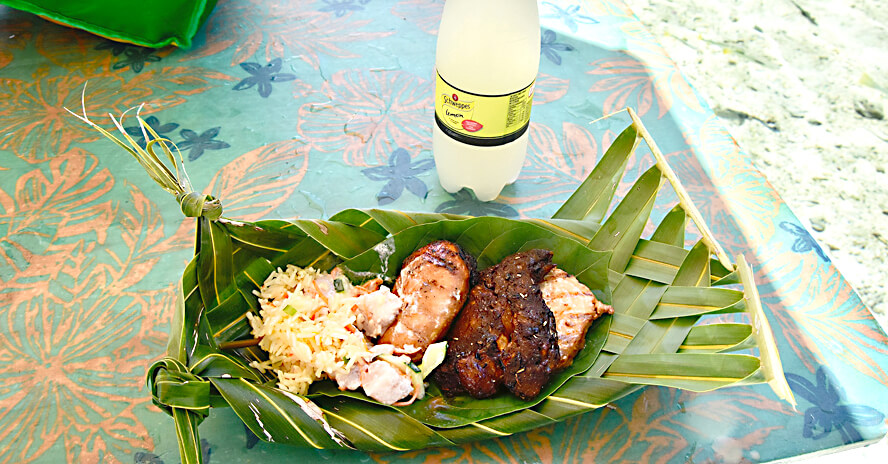 My Lunch – Raw Tuna, Chicken, Beef, Mahi Mahi and Rice for the Fish

It's quite a feast for both us and the fish that are swimming all around us. Frankly, this is a special meal that we will remember for a long time to come and a great thing to do on the last day of the trip. 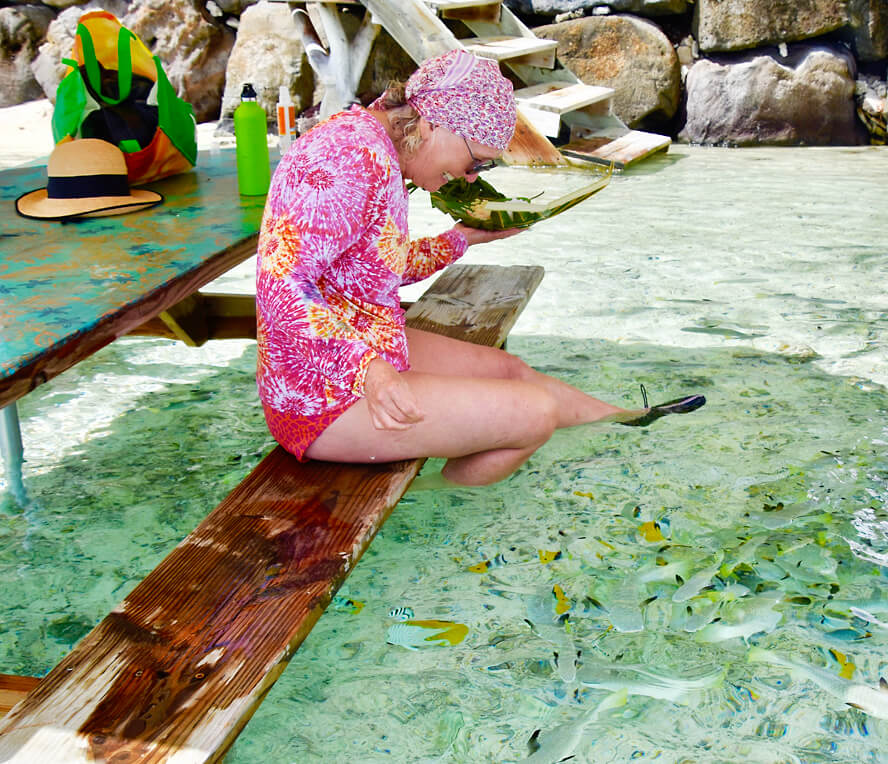 Meanwhile, Mike and fellow captain Arrow serenaded us from above. 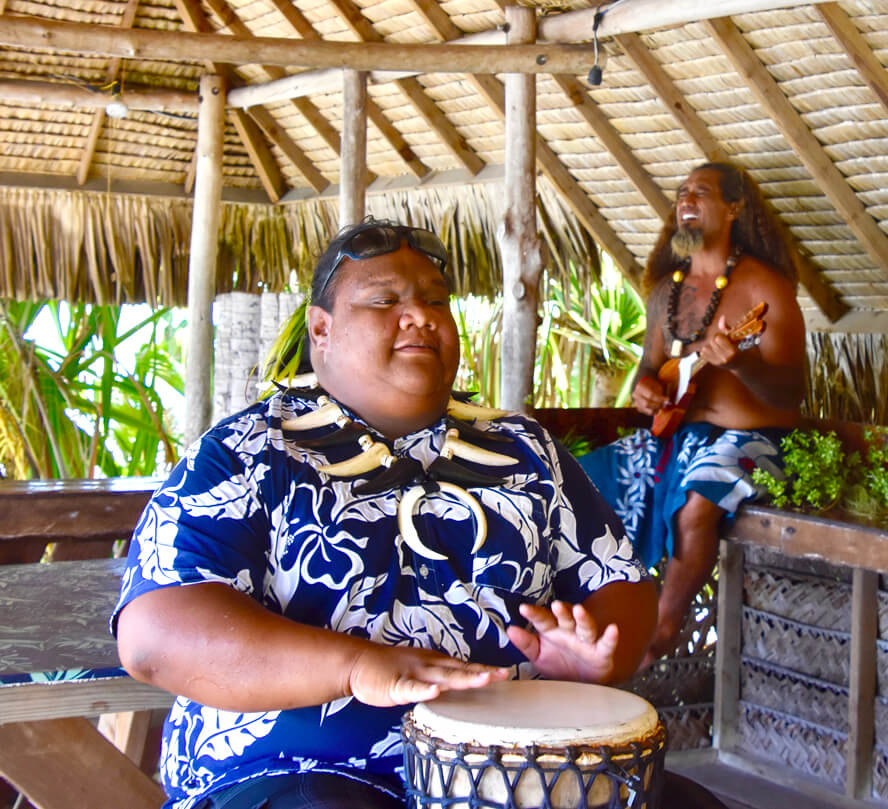 This video shows what a perfect time this really was.

After we finished lunch Arrow gave us a demonstration of how to make dinner plates from palm leaves with Mike staring on. 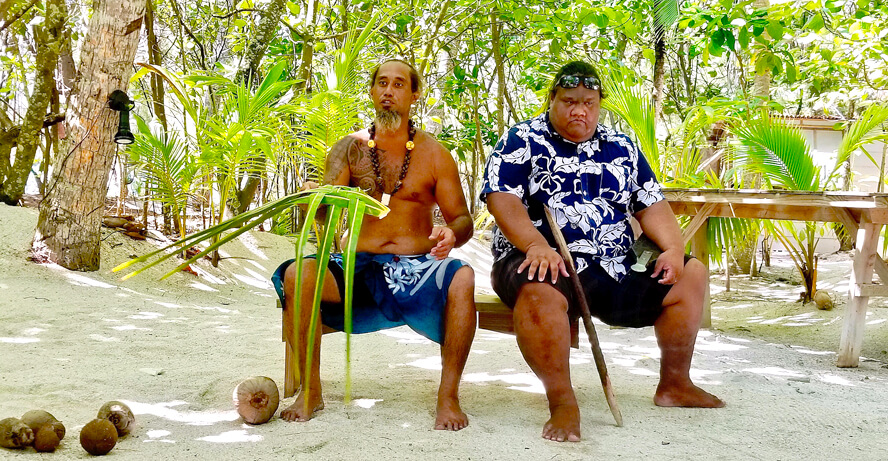 And then how to extract coconut milk with Mike looking on a little more interested this time. 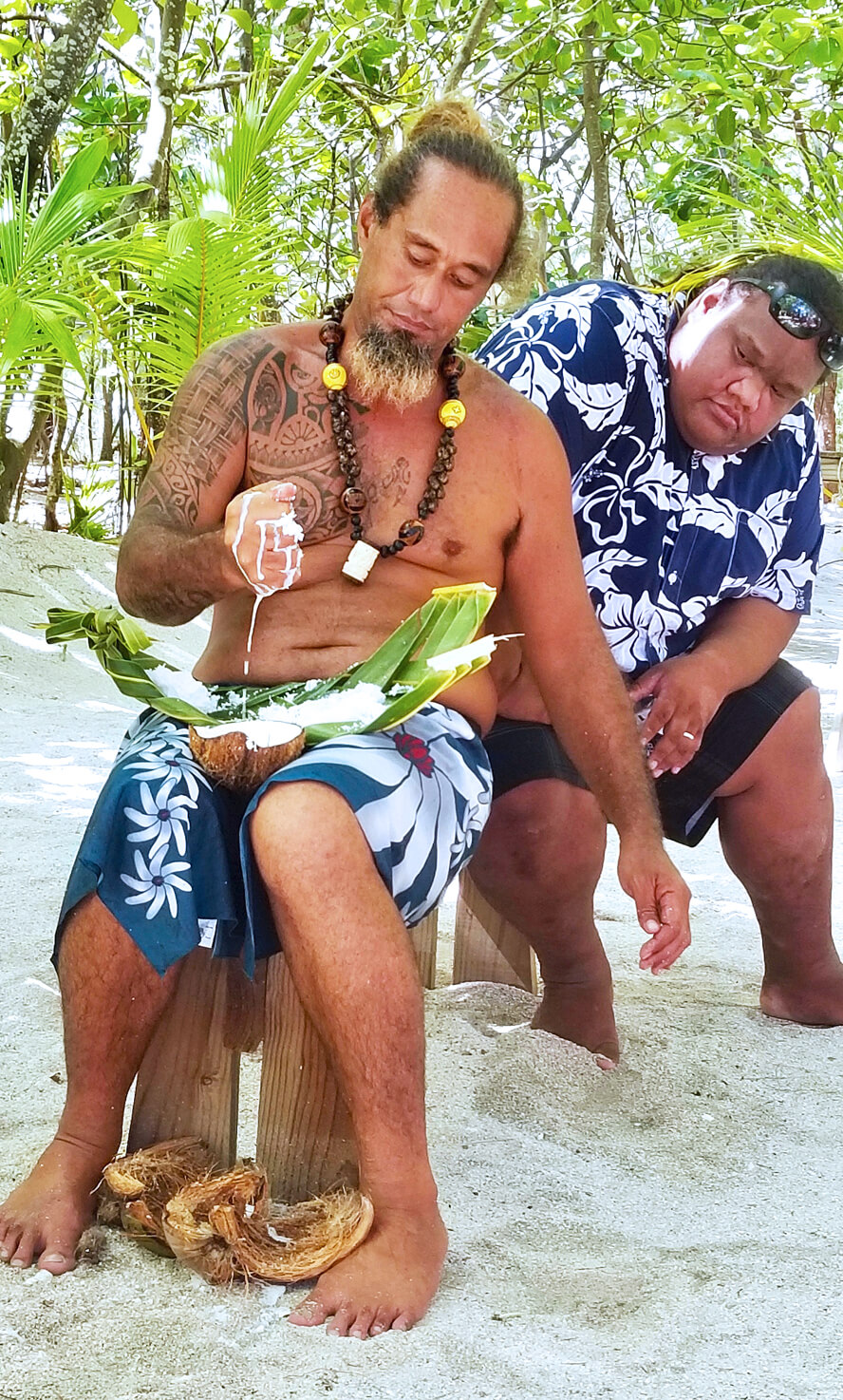 We ended this final portion of the Bora Bora by boat trip by taking this group photo. It also marked the end of a journey of thousands of miles that we had all taken together and bonded together. It was yet another life-changing trip from Adventures Abroad and I thank Martin and all the people behind the scenes who made it possible. 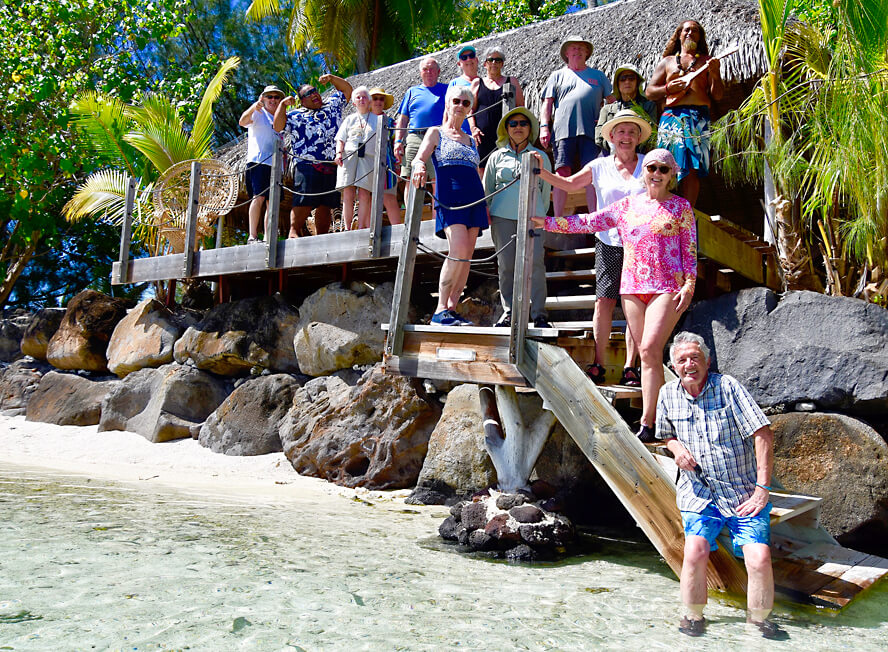 Our next trip with AA will be to Switzerland in a few months time to do some serious hiking in the Alps. I hope you'll join Alison and me there.