In his latest blog post, Dale Dunlop, The Maritime Explorer, searches for evidence of Saint Paul in Malta. If you are interested in dates and prices for this trip please check out our 6 DAY MALTA TOUR.

In the last post, our Adventures Abroad group led by Victor Romagnoli and local guide Chantelle Shaw visited the enigmatic cart track markings at Clapham Junction and came away no closer to the truth than thousands before us. The number of unsolved mysteries associated with this island nation are rapidly piling up. In this post, we are going to be on a little firmer ground as we go in search of evidence of Saint Paul in Malta. We’ll have the Bible as our chief reference source and every word of it is literally the Gospel truth, right? Please join us in a number of places where arguably the most important person in the New Testament after Jesus is known to have proselytized.

Who Was Saint Paul and What was He Doing in Malta?

Unlike many figures in the Bible, there is no dispute that Saint Paul was a real person. He began life as a Jew named Saul of Tarsus, a Pharisee who spent much of his early adult life persecuting Christians. Then he had his famous conversion on the road to Damascus which has become a metaphor for an epiphany or as we might call it today, change brought on by ‘a mid-life crisis’. After that he became the most successful preacher in history making three missionary voyages which resulted in seven undisputed books of the New Testament and perhaps more. This is a map of his voyages. 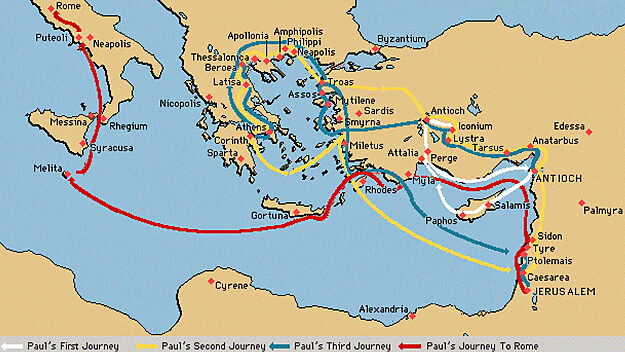 The fourth voyage which resulted in Saint Paul in Malta was not one he planned. Not surprisingly he was not the most popular person among the Jews who he had turned his back on and was preaching that Jesus really was the Son of God. The Jewish leaders wanted his head and managed to get him arrested, but as a Roman citizen, Paul had the right to present his case to the Emperor in Rome. That is where he was headed as a political prisoner when his ship went aground on this small islet which we passed on the way to Gozo, ergo Saint Paul in Malta.

According to the description of events contained in Acts of the Apostles Chapters 27 & 28 Paul pulled off a really cool maneuverer upon being well received by the locals who I presume were all pagans. He managed to get bitten by a snake and danced around with it attached to his hand screaming, “I’ve been bitten by a viper!” Since vipers are deadly poisonous that should have been it for Paul, but No! He didn’t even break a sweat. The locals were immediately convinced he was a god and he did not disagree.

There are numerous representations of this event in churches in Malta and elsewhere. This one is from the Church of St. Paul Shipwrecked in Marsalforn on Gozo. 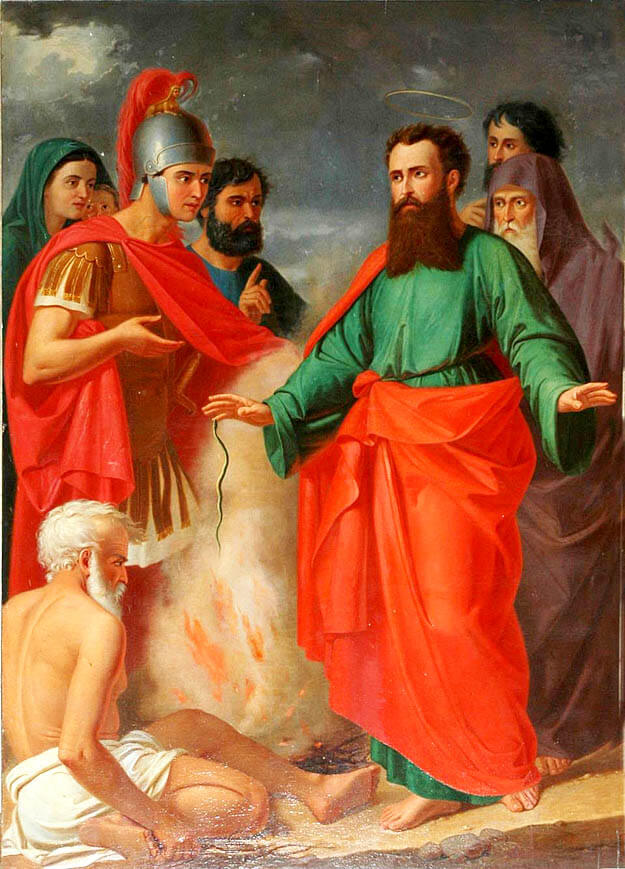 St. Paul Bitten by a Viper

The only problem is that there are no vipers or any poisonous snakes on Malta other than the cat snake which has a very mild venom that would not come close to killing a human. True believers explain this away by saying that there were poisonous snakes on Malta when Paul arrived, but after that impertinent one bit him, he essentially defanged all of them. Unlike St. Patrick who banished the snakes from Ireland, St. Paul just got rid of their ability to harm people.

Saint Paul in Malta then went on a blitz of miracle healing starting with the father of Publius, the Roman in charge of Malta at the time of his arrival. He set up his headquarters in a cave or grotto where he stayed for three months before departing for Rome with stops in Sicily and Naples along the way. He should have stayed in Malta as eventually he met the fate of most early Christians in Rome and was beheaded on the orders of Nero.

Our destination today will be the city of Rabat where there are a number of places associated with Saint Paul in Malta. 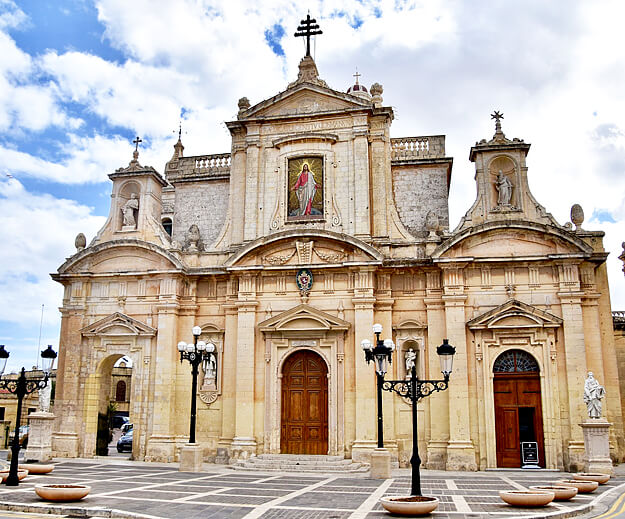 This is the Basilica of St. Paul in Rabat which is built near the site of St. Paul’s grotto, but the actual entrance to the grotto is through the smaller Church of St. Publius which is annexed to it. This is the same Publius whose father Saint Paul miraculously cured, convincing Publius to become a Christian and an important one at that. He was the first bishop of Malta and later of Athens, eventually being named Malta’s first saint after being martyred at age 92.

This is the grotto where Saint Paul apparently holed up while in Malta under the protection of Publius. Why he would choose to live in this place rather than above ground is another Maltese mystery. 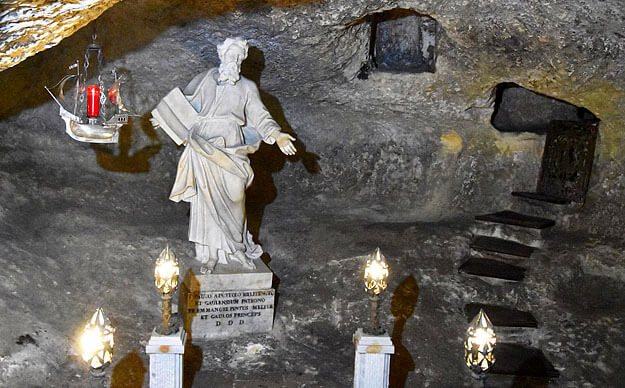 In addition to St. Paul’s Grotto there is also the Sanctuary of St. Publius to visit which contains this fine statue of Saint Paul in Malta although you can see he was going to a different hair stylist than in his grotto statue. 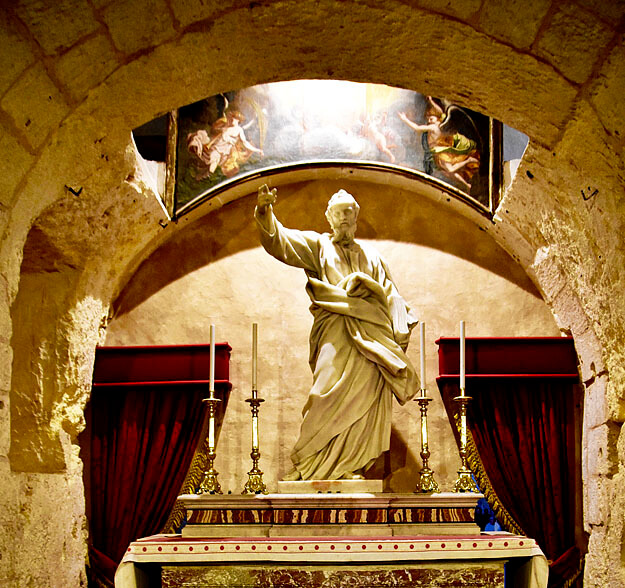 St. Paul in the Sanctuary of St. Publius

The sanctuary contains the oldest set of Christian catacombs in Malta. You may recall from an earlier post that the Hypogeum contained burials dating back to 4000 BC, so the catacombs we are visiting today are relative late comers to the underground interment scene.

Now catacombs are not on everybody’s must see places list. They are often dank, poorly lit, and claustrophobic. Add to that the fact that they were once full of dead people and the word ‘creepy’ comes to mind. However, I am happy to report that these catacombs are not scary at all, just a little tight in places like the one below. 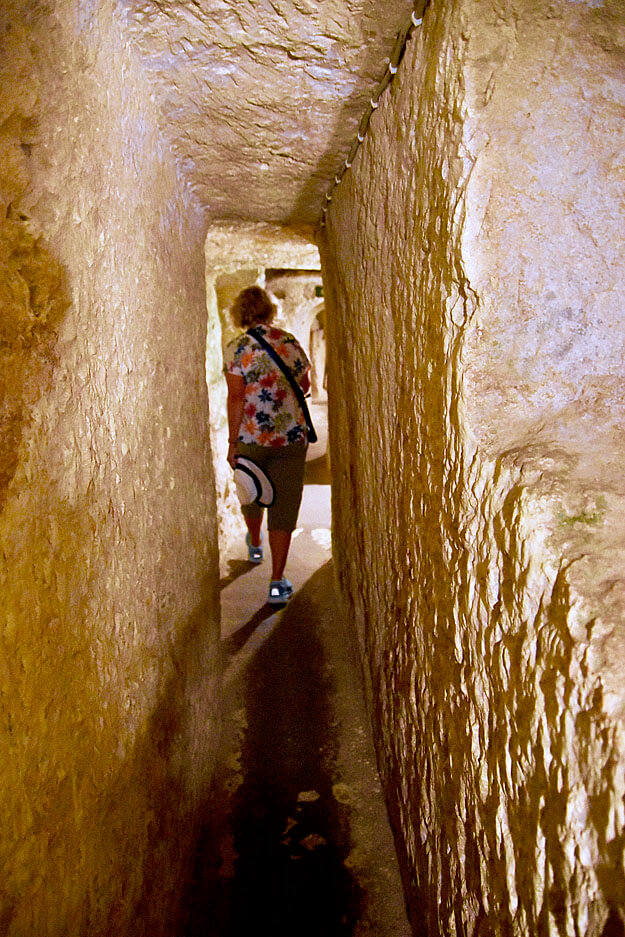 Alison in the Catacombs of St. Publius

Now what is both creepy and scary is that these catacombs doubled as air raid shelters during WWII. I cannot imagine hiding out in a place like this, packed in like sardines, for more than five minutes. Then again I’ve never had anyone trying to kill me by dropping bombs on my head. Visiting places like this makes one realize the travails that others, only a generation before us, had to endure to survive. We come here as tourists; they came here as terrified human beings totally unsure if they would live through the next few hours. There’s something about visiting catacombs that inevitably brings on macabre thoughts. 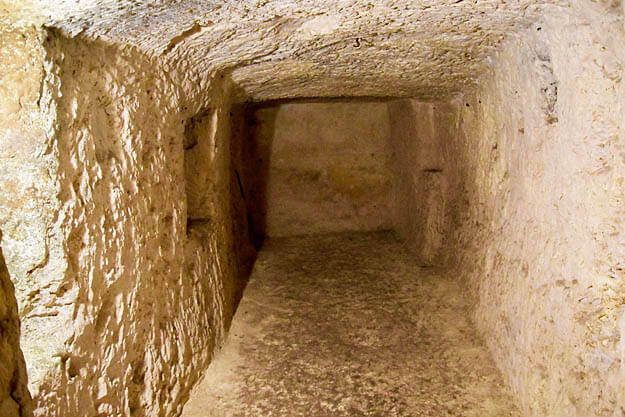 After finding St. Paul in his grotto and touring the St. Publius catacombs we resurface and head not far away to an even larger set of catacombs, these ones named for St. Paul. 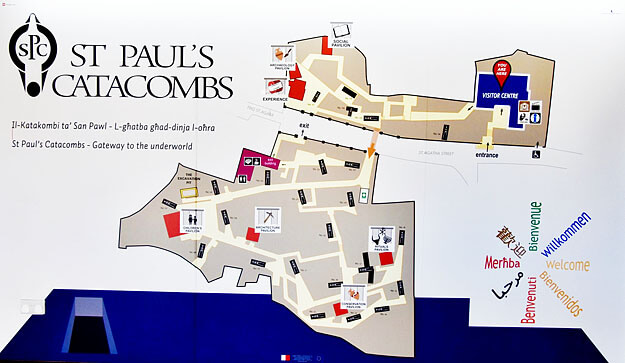 Map of the Catacombs

These catacombs have a very impressive Visitor Centre where we learn that there was a belief at one time that these were directly connected to the first set of catacombs we visited and thus named for St. Paul. It turns out they don’t connect.

We also learned that there were three types of burials that took place here as illustrated in this display. You could be put in a coffin, wrapped in a shroud, or cremated and put in an urn.

There are many examples of burial statuettes of which these are a few. I wonder if the idea was that the rooster would crow when the day of judgement arrived and awaken the deceased to be transported to heavenly paradise or maybe in the opposite direction. 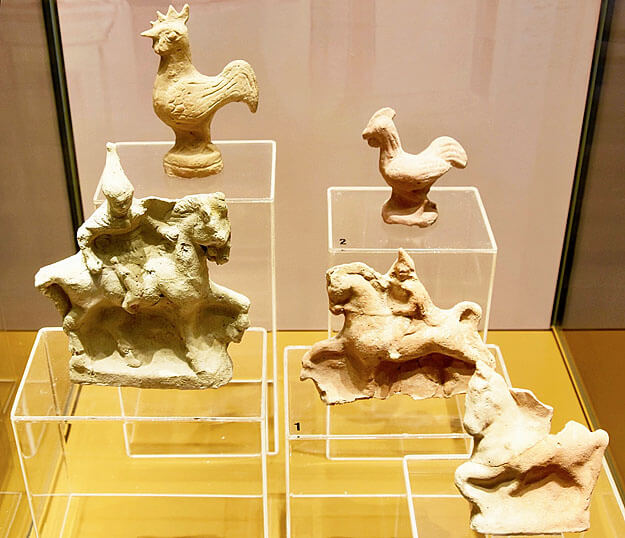 There is also an excellent mural depicting the burial of an important Roman official complete with professional mourners. The ones above are immediate family who followed the body stoically while the pros were up front wailing, gnashing their teeth, and tearing at their clothes in professions of profound grief that no ordinary amateur could match. 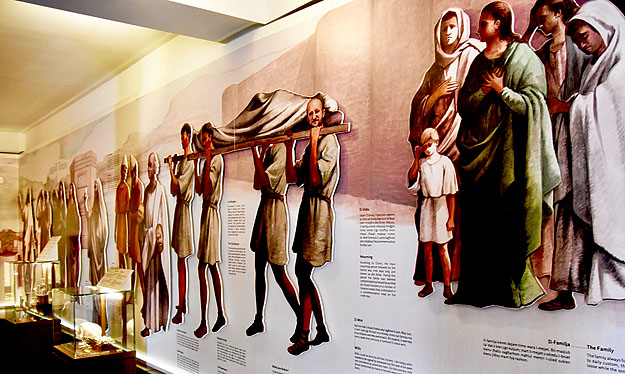 Many people erroneously think that catacombs are intrinsically linked to early Christianity, used as meeting places away from the prying eyes of the pagan Romans. This may have been true in some cases, but the use of catacombs as a place of interment far outdates the Christian era. As Chantelle explained at the entrance to the first of the over twenty separate catacombs you can explore here, there are Christian, Jewish, Roman and even Phoenician burials to be found. With that our group was left to explore on our own using the map in the photo as a guide to the ‘best’ catacombs. 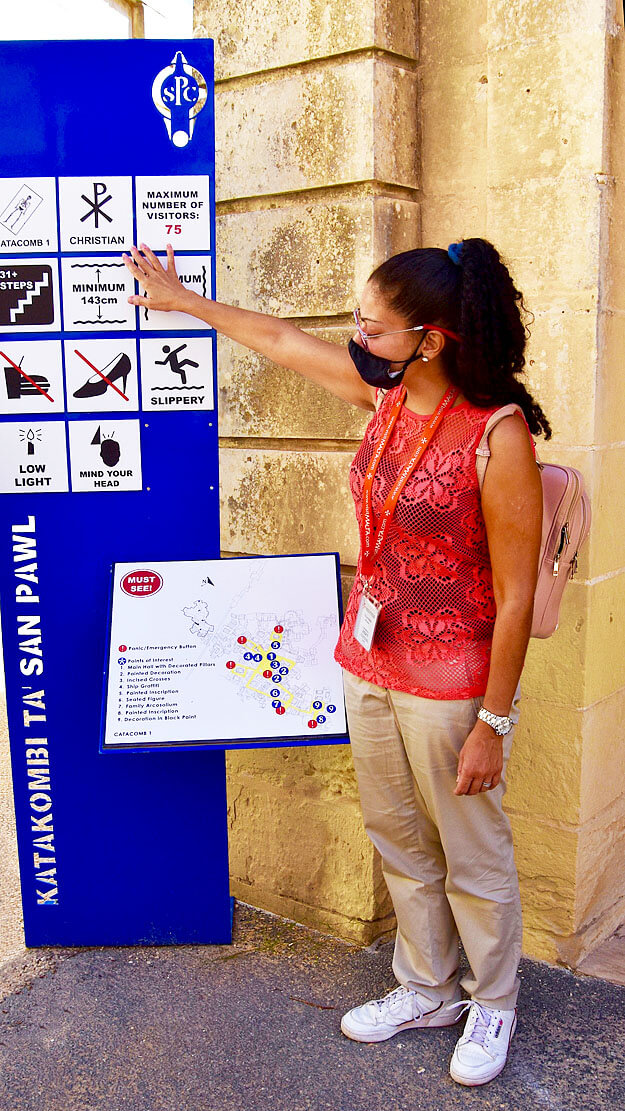 Chantelle at the Entrance to the First Catacomb

Here is Alison descending into one of the catacombs. Whenever I go into a place like this I always think of the line from Dante’s Inferno, as the author passes the Gates of Hell, “Abandon hope all ye who enter here”. Oh well, life’s been good so far. 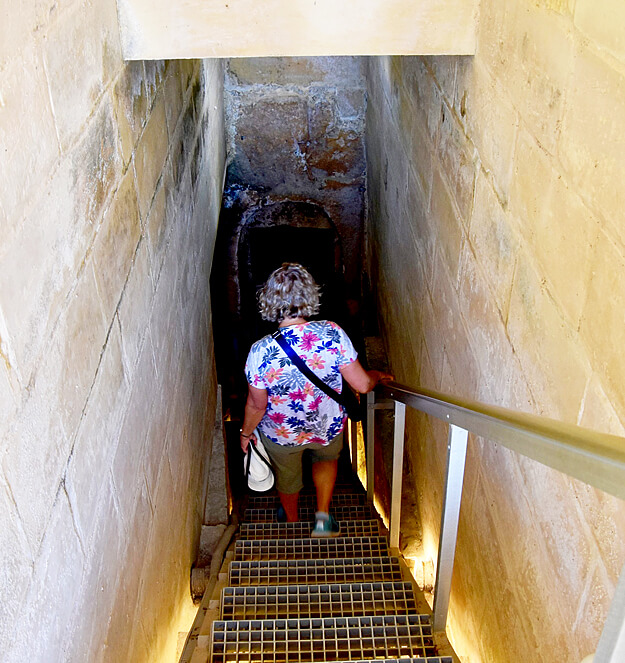 Good catacombs still have some bones in them like the ones in Paris. Great ones not only have the bones but the bodies and clothing to go with them like the Capuchin Catacombs in Palermo which is, without doubt, the creepiest place I have ever been, especially when the power went out briefly and people started screaming in terror. 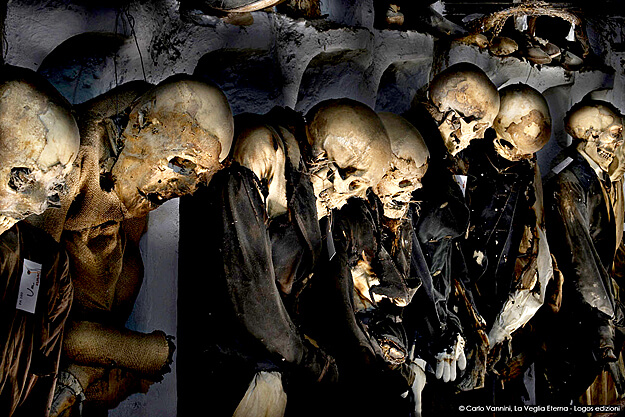 For better or worse, all the bones and bodies have been removed from the Catacombs of Saint Paul in Malta. So you have to use your imagination to scare the shit out of your fellow travellers like popping up out of nowhere after making eerie noises.

Popping Up in the Catacombs

In some places, the openings look like jack o’lanterns which is appropriate as we are here not long before Halloween.

Here is a primitive inscribed menorah at the entrance to one of the Jewish catacombs. 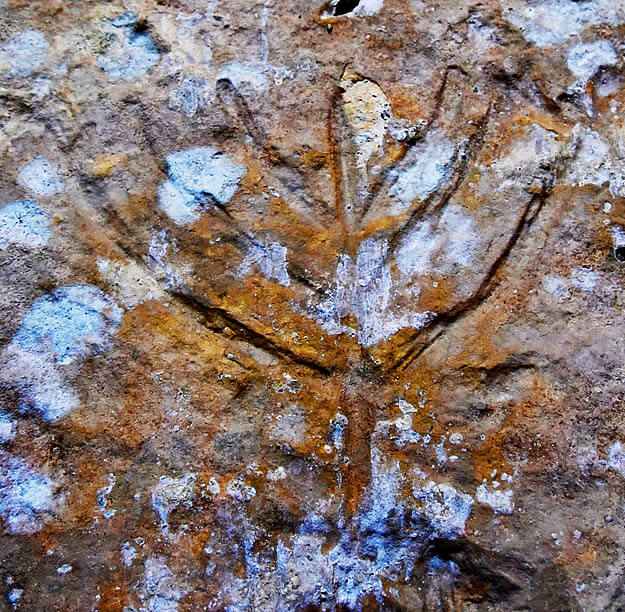 The catacombs remained in use right up until the 7th century and then again briefly in the 13th and today are a major part of telling the story of Saint Paul in Malta.

Completing our visit to Rabat we stopped for a quick visit to the Domus Romana which is a small museum built on top of the ruins of a Roman villa discovered in 1881. It has some very interesting floor mosaics which were a feature of all the best houses of the time. Even M.C. Escher would be impressed by the intricate geometric designs in this one. 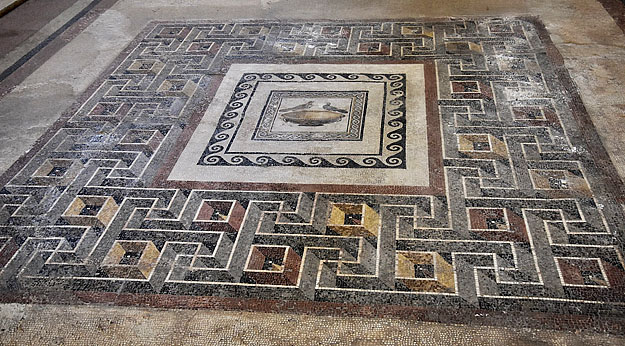 Well, that completes our search for Saint Paul in Malta, but not the end of our time in this immediate vicinity as we next walk to the sister city of Rabat, Mdina which was the Roman capital of Melite.

We thank Dale Dunlop, The Maritime Explorer, for once again joining us on tour and sharing his story of getting back on the road for an Adventures Abroad tour to Malta. Please stay tuned for more blog posts featuring Dale and his experiences with us on this Malta tour.