In his latest blog post, Dale Dunlop, The Maritime Explorer, visits Mdina – Exploring Malta's Ancient Citadel. If you are interested in dates and prices for this trip please check out our 6 DAY MALTA TOUR

In the last post, we concluded our search for St. Paul in Malta at the small city of Rabat. In this post, we'll walk on from Rabat into its sister city of Mdina to explore the cathedral, walk the narrow streets and enjoy the views of Malta from its high walls. Please join our Adventures Abroad group led by veteran tour leader Victor Romagnoli and local guide Chantelle Shaw on what promises to be an interesting couple of hours in this most interesting little country.

In a previous post on Hagar Qim we visited one of the most ancient places on earth where humankind took among its first steps to advance forward from the 2.5 million years Paleolithic era which still comprises well over 99% of the time that we have been a species. While Mdina is nowhere near as old as the megalithic temples of Malta, it is still very old, tracing its origins back to a foundation by the Phoenicians in about 800 B.C., although given its prominence as a defensible landmark it had been inhabited much earlier than that. The Phoenician city was called Maleth and lasted until the Romans took over around 200 B.C. and renamed it Melita, from whence the name Malta eventually derived. Ancient Maleth/Melita was actually a lot larger than present day Mdina and lasted until the fall of the western Roman Empire, but today, other than the Domus Romana which we visited in Rabat, there are very few traces of the city that lasted well over a millennia on the site we are about to visit.

Trying to get a precise history of Mdina post the Roman Empire is not that easy as sources differ, but here's what seems most likely. It was apparently the Byzantines who occupied the site up until 870 when it was attacked and almost completely destroyed by attacks from the Aghlabid Arabs who controlled much of North Africa, Sicily, Sardinia and parts of southern Italy. They massacred the inhabitants and generally laid waste to the city destroying the churches and the fortifications and the place sat largely abandoned for over a century before being rebuilt as an Arab community who renamed it Mdina. The name, which simply means 'town or city' stuck even after the Arabs were ousted in 1091 by Roger I of Sicily, one of the Norman warlords who played an important role in the history of southern Italy.

From this point on until the arrival of the Knights of St. John in 1530, Mdina was the capital of Malta and the seat of the Maltese nobility which accounted for another of the city's many monikers – Città Notabile (Noble or Notable City). There appears to have been a number of periods of construction on the fortifications of Mdina, eventually leading to its present day appearance as a truly fortified hilltop citadel as shown in this aerial photo taken by R. Muscat. 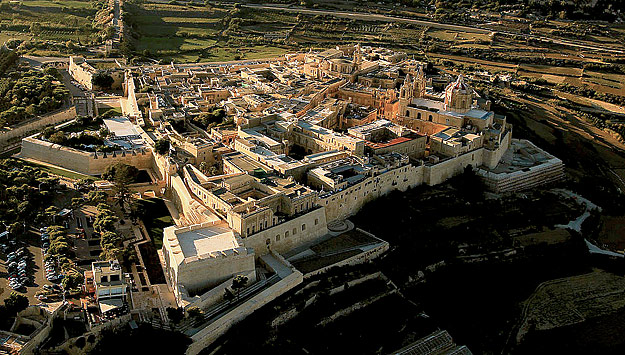 After the Knights of St. John built their new capital of Valletta, Mdina declined in importance and population to the point that today less than 300 people reside within its walls, while Rabat has grown to over 11,000. That accounts for yet another moniker for Mdina – the Silent City.

We first got a glance of Mdina earlier before our visit as we passed by on our way to Rabat.

There are only a couple of ways into Mdina and they all involve walking. There are a few cars inside the walls belonging to residents, but not many. This is the view of the moat gardens as you pass through a small park that leads from Rabat to the walls of Mdina. 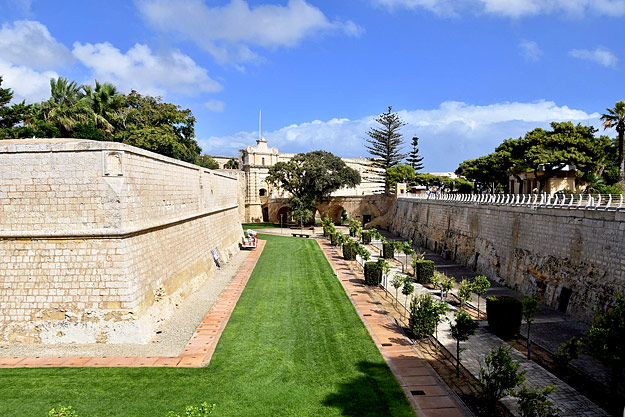 Chantelle explains the plan of the visit starting with crossing over the dry moat that surrounds the city walls in a number of places. 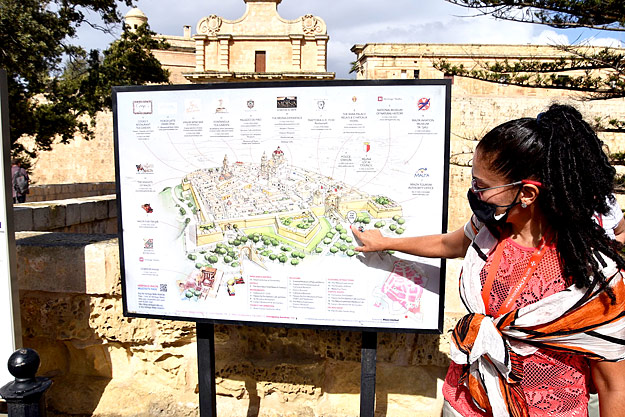 This is the view of the principal entryway into Mdina, the Vilhena gate, from the moat. It dates from 1724 and is actually one of the newest constructions in the entire place. It was featured as one of the city gates to King's Landing in one of the first season episodes of Game of Thrones. 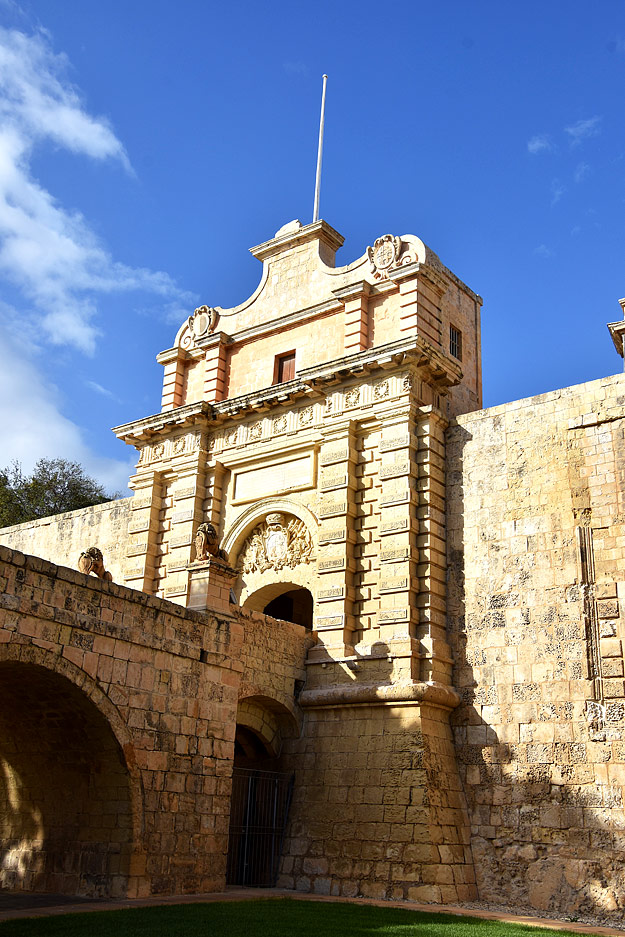 It is with a definite sense of anticipation that our group passes under the coat of arms of Grand Master António Manoel de Vilhena and enters one of the top tourist attractions in all of Malta. 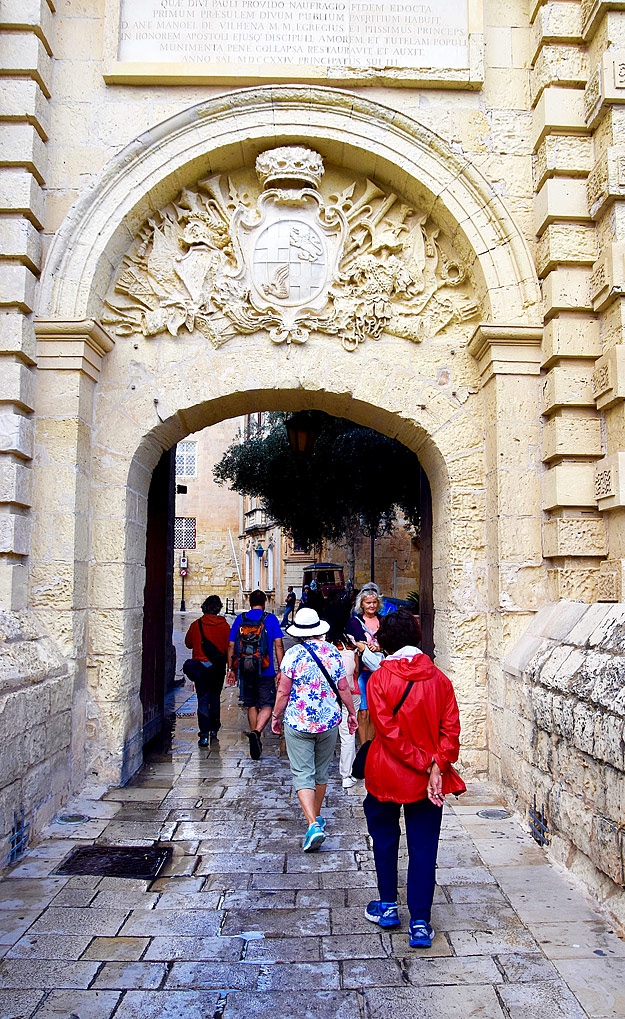 Entering Mdina through the Vilhena Gate

On the interior side of the gate are the figures of St. Publius, St.Paul, and St. Agatha, the three principal saints of Malta. Note that Paul still has that troublesome viper attached to his left hand.

Inside the Vilhena Gate is the Palazzo Vilhena which today houses the National Museum of Natural History from where in 2004 a rock gathered on the moon by the Apollo 17 mission and valued at over $5,000,000.00 was stolen and never recovered. Maybe it had something to do with using this guy as a museum guard.

One of the primary attractions in Mdina is St. Paul's Cathedral which dominates the skyline from above and below as shown in two of the photos above. It is built on the alleged spot where St. Paul first met Publius, the Roman official who welcomed him and later became the first bishop of Malta. Historically we do know that they did meet so this might actually really be the spot. 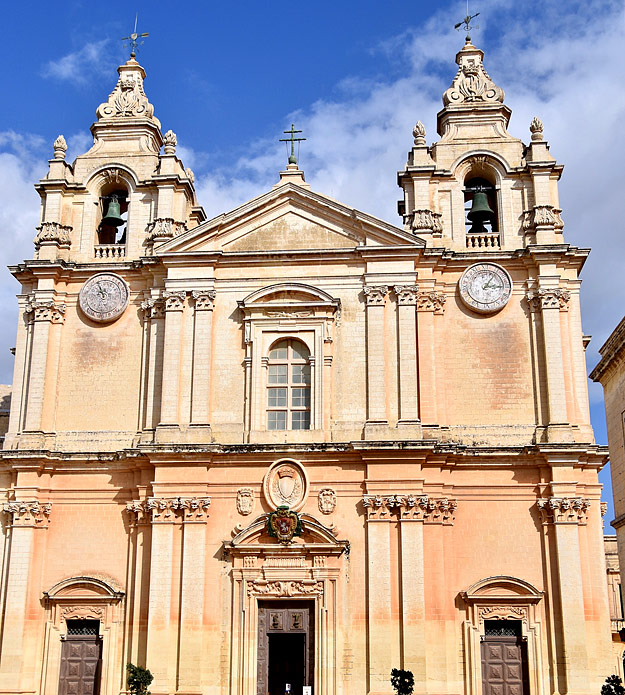 Although there is apparently a bell that dates back to 1370, the present structure was completed in 1703 after the older one was almost entirely destroyed by the great Sicilian earthquake of 1693. It shares the seat of the bishopric with St. John Co-Cathedral in Valletta which we visited earlier on this tour.

It has a number of features in common with the church in Valletta including the main floor being a wonderful collage of marble grave markers, every one different. 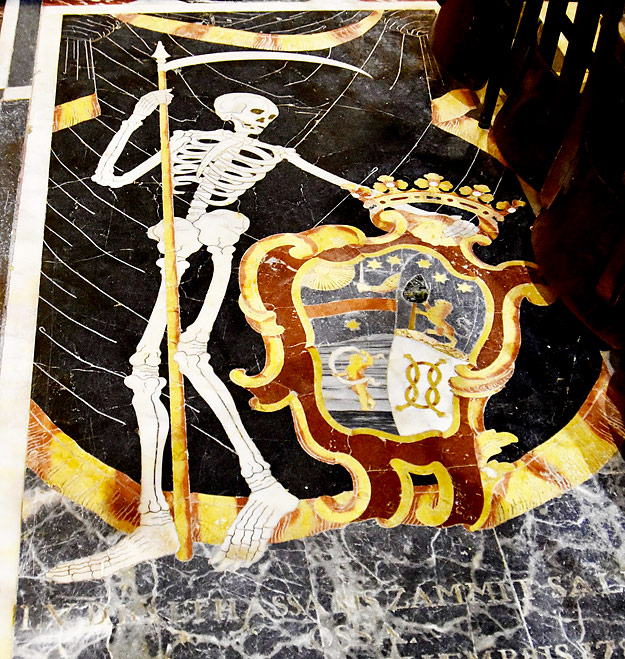 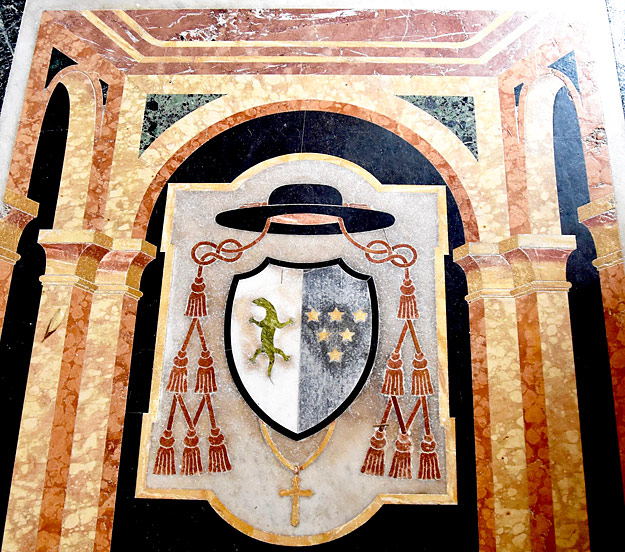 Coat of Arms of Malteses Family

However, St. John Co-Cathedral does not have a cupola which St. Paul's does. You would not likely guess that this version of the cupola painting dates only from 1955 after numerous earlier editions were either destroyed or simply faded away. 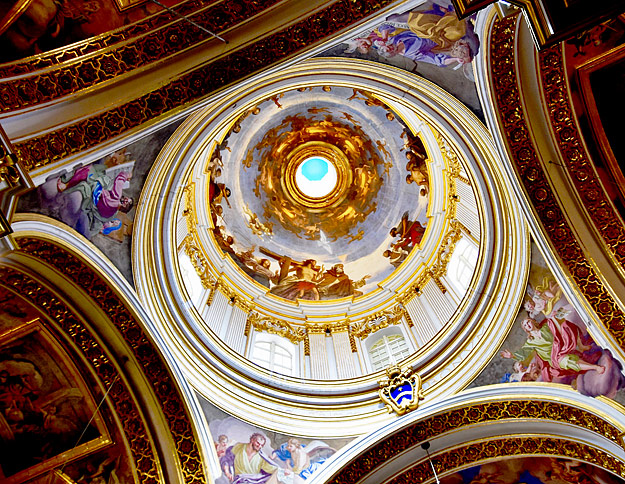 There's nothing I like more than wandering the narrow streets of an ancient city with no particular destination in mind and just waiting to see what one might come across. For defensive purposes, the streets never ran far without curving which prevented attackers from using arrows as an effective weapon. 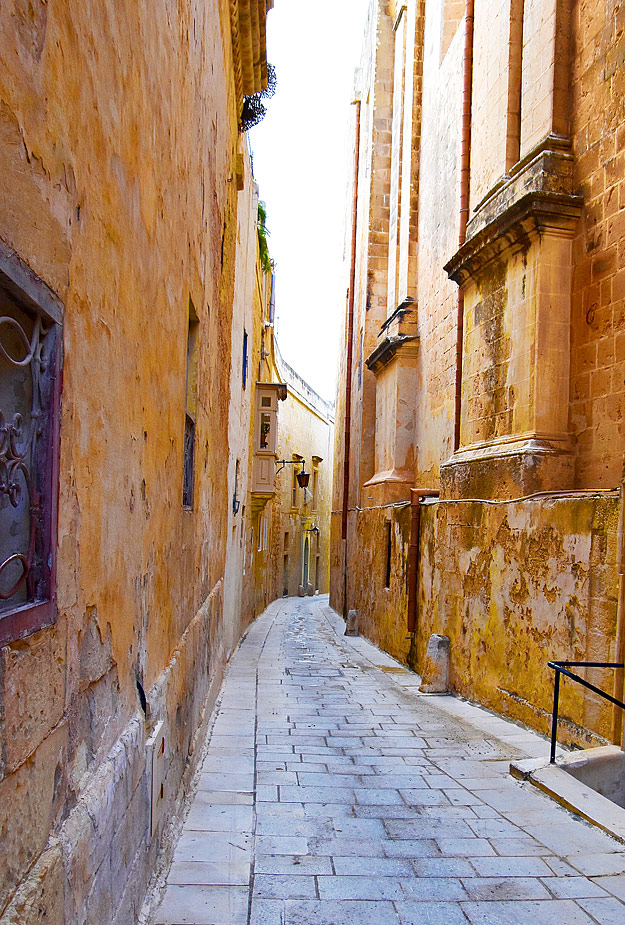 Door knockers are always an interesting study no matter where in the world you find them and Mdina had more than its share of interesting specimens. 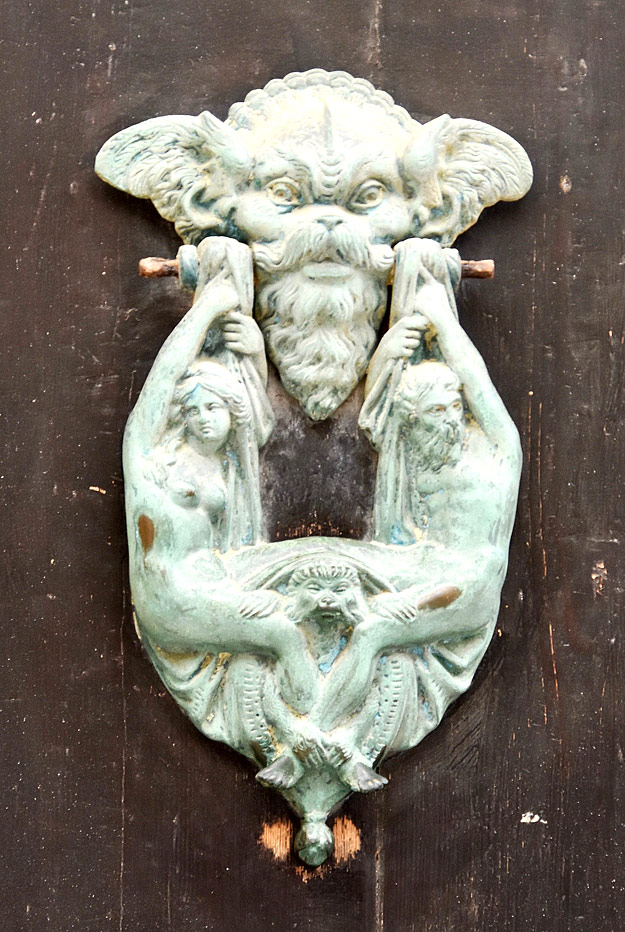 This one is clearly a coat of arms of one of the Maltese aristocratic families that once lived in Mdina. The Latin inscription translates as 'Not Without Hardship'. 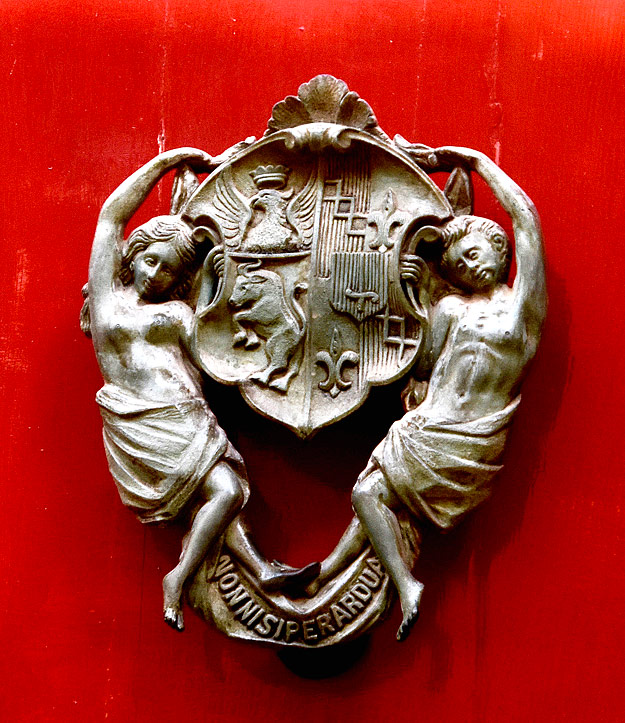 Non Nisi Per Ardua - Not Without Hardship

Also of interest as we walk the streets of the Silent City are a number of these projecting railings which Chantelle explained are referred to as 'pregnant' balconies due to their shape. 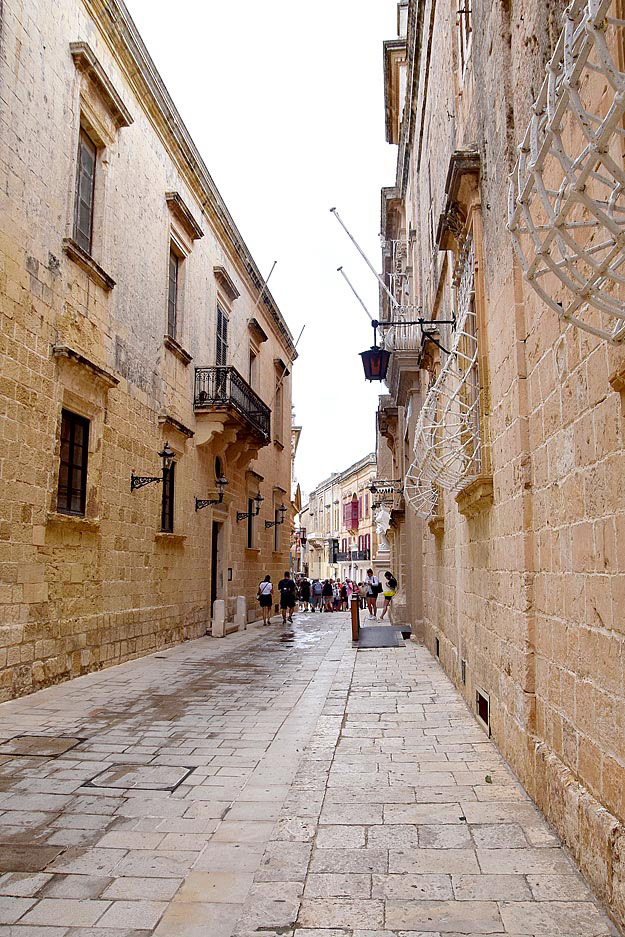 Finally, we made our way to the outer walls of Mdina from where we enjoyed some of the finest views on the island of Malta.

We could look down and get a much better idea of how the rubble wall system of agriculture actually worked.

Lastly, by zooming in I got this picture of the great dome of the church of Mosta which we will be visiting in the next post. 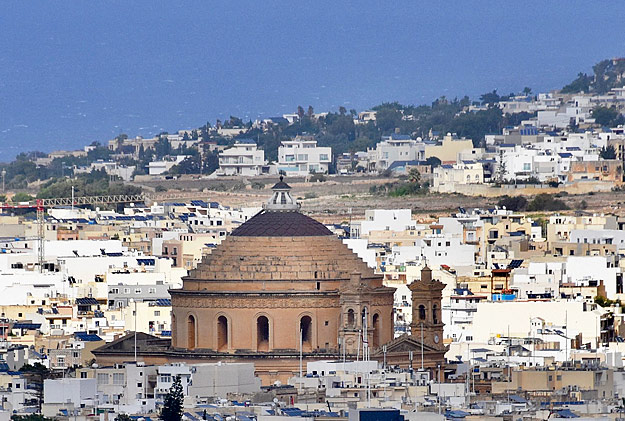 Once again Adventures Abroad had expanded our horizons during a wonderful afternoon exploring the citadel of Mdina.

We once again thank Dale Dunlop, the Maritime Explorer, for his fantastic insights into Malta. We look forward to the next blog entry where the secrets of Mosta and Marsaxlokk are uncovered!