Japan Group Tours – Modern But With Respect For The Past

Our Japan group tours reveal a country that is a complex mix of ancient traditions, and ultra modern, where glass-clad skyscrapers might have a room full of tatami mats, ready to host a tea ceremony, accessed by a wooden door. 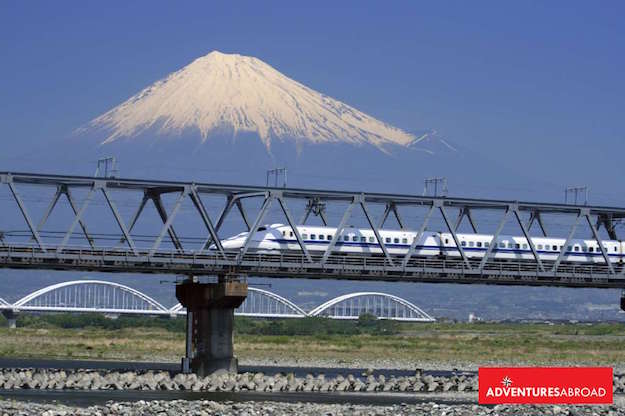 The bullet train is a great way to get around Japan quickly, as it reaches speeds of up to 320 kilometres per hour! In the background you see Mount Fuji, one of Japan’s Three Holy Mountains. This dormant volcano last erupted in 1708.

Inhabited for thousands of years, Japan’s early history is probably best known for the samurai culture which developed there. The rivalries in the noble classes were fought with samurai. For 265 years the Tokugawa Shogunate was housed inside the Edo-jo Castle, where many battles took place.

This massive, impregnable fortress’ outer walls were 10 miles long (16 kilometres), were ringed with moats and they were thick enough for six samurai to walk abreast atop them. Chiran is a small, ancient town on Satsuma Peninsula, and was known to house samurai. A well-preserved district there has gardens and houses with a history dating back 250+ years.

On our Japan group tours travellers learn about Japan’s traditions, where local guides take us through the intricate, precise culture, including the famous Geisha. As tradition has it, these women were entertainers, and were often hostesses close to local theatres.

Kyoto is a historic Japanese city, with a history exceeding 1,000 years, full of wise masters, geisha and incredibly skilled craftsmen. A visit to the Gion and Pontocho sections of Kyoto reveal the side streets, lit by lanterns, where the last geisha finishing schools will be found, in addition to the Noh and Kabuki theatres.

Japan is well-known for its Zen gardens, and Kyoto adds to this, with the Golden Pavilion, one of Japan’s iconic architectural works. The Ryoan-ji is Kyoto’s raked gravel Zen garden, and must not be missed.

An important date in Japanese history is August 6, 1945, when life changed for the entire country. It was this day, still during World War 2, that an atomic bomb was dropped on Hiroshima, where 200,000 people died in the atomic age’s first battle. Three days later, Nagasaki fell victim to a second atomic bomb, killing tens of thousands. In both cities, tens of thousands of buildings were flattened in the blasts. These solemn occasions are still remembered by the Japanese today.

What Japanese group tours would be complete without a visit to one of the world’s great cities, amongst its most populous as well with nearly 10 million inhabitants. Tokyo define the future, but its high speed trains quickly whisk travellers outside of the city to the picturesque countryside and its onsens, where tensions are drained away in their relaxing pools.

Check out our Japan group tours to explore this country full of contrasts.

Published on 12 October 2018
< Ecuador Tours – Experience the Galapagos Islands
India Tours – A Land Like No Other >
Recent Blog Posts
Phaselis - Romantic Forested Ruins by the Sea
Myra - Visiting the Home of St. Nicholas
Te Moana - A Great Introduction to Tahiti
The Turquoise Coast by Boat
Fethiye to Kas - Lycian Tombs and a Great Market
French Polynesia with Adventures Abroad
Can't find what you're looking for?