There’s no doubt the most popular part of our Ecuador tours are the Galapagos Islands, but they’re far from mainland Ecuador, at around 1,000 kilometres west of this South American country. 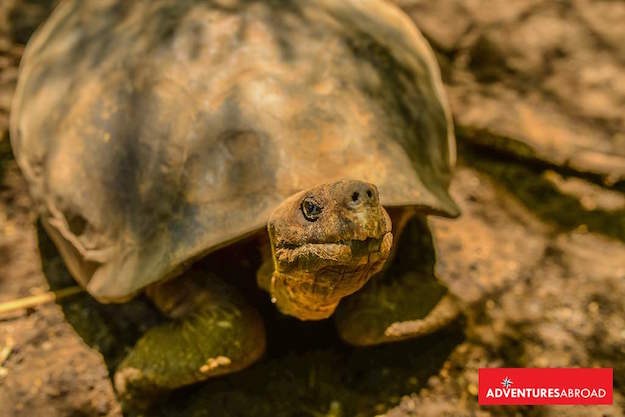 The tortoises living on the Galapagos Islands are the largest species on Earth, growing up to 900+ pounds and live 100+ years!

This natural marvel consists of an archipelago of hundreds of islands, with 12 of them being quite large, and the rest being fragmented volcanic islands. Charles Darwin’s visit of 1835 brought international attention to the island, which is an absolute must-see for anyone who loves wildlife. The Galapagos were the inspiration for his early theories of evolution and his book On the Origin of Species by Means of Natural Selection.

When visiting the Galapagos, you will see unique, plants and animals specially adapted to the difficult terrain. Some of the wildlife you’ll spot are cacti and unusual vegetation, tortoises, sea lions, unusual seagoing iguanas and thousands of land and seabirds. In fact, birders will especially enjoy these Ecuador tours, with fascinating species such as Hood Mockingbird, Espanola Mockingbird, Galapagos Hawks, Nazca Boobies, Galapagos Ground Doves, American Oystercatchers, Yellow Warblers and, by all accounts, the impressive Red-billed Tropicbird.

There is not a lot known about the history of the Galapagos Islands, and whether any pre-Columbian cultures had visited there, though some ceramic artifacts have been discovered. Being so far from the coast, it is thought that the Incan empire was not likely to have visited, not being seafarers of any note. Europeans discovered the islands by accident in the 16th century when a ship, headed to Peru, encountered foul weather and went far off course.

For more than 300 years after its European discovery, the Galapagos were home to pirates keen on enriching themselves at the expense of the Spanish, and later for whalers using the islands as a base. The islands were annexed by Ecuador in February of 1832.

As many South American countries have, Ecuador had to fight for independence, and won early on in the 19th century. With strong neighbours at the time, Ecuador remained small, but with the incredibly varied landscape and list of species calling it home, is one of the most bio-diverse countries on Earth.

At the beginning of the 20th century, some Europeans began to settle the islands, and an American military base was set up there. Fortunately, in 1959, Ecuador declared the majority of the Galapagos Island archipelago as a national park.

Check out our Ecuador tours to explore this fascinating country and its famous islands.

Published on 9 October 2018
< South Korea Tours – Dynamic & Traditional
Japan Group Tours – Modern But With Respect For The Past >
Recent Blog Posts
Phaselis - Romantic Forested Ruins by the Sea
Myra - Visiting the Home of St. Nicholas
Te Moana - A Great Introduction to Tahiti
The Turquoise Coast by Boat
Fethiye to Kas - Lycian Tombs and a Great Market
French Polynesia with Adventures Abroad
Can't find what you're looking for?