Our Adriatic tours are something every traveller should experience at some point: charming, old-world villages, mountains rising straight out of an intensely blue sea, blanketed by thick forests, romantic castles, a relaxed pace of life. This is the Adriatic. 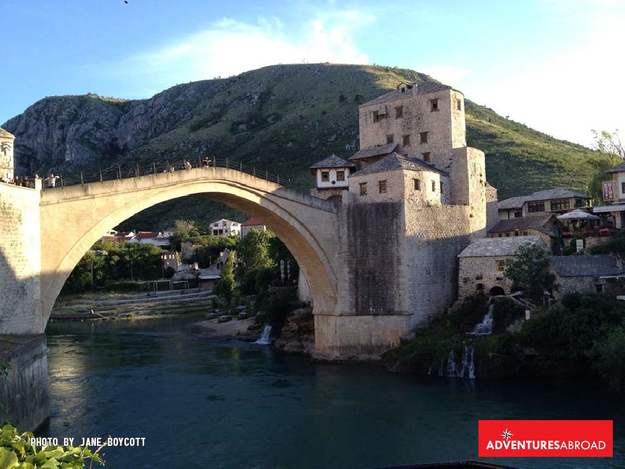 The beautiful Mostar bridge in Bosnia Herzegovina was destroyed in 1993 during the civil war, but has, thankfully, been rebuilt. This iconic bridge, also known as Stari Most, originally took 10 years to build, and was completed in 1567.

The area is known for its turbulent past, with the breakup of the former Yugoslavia leaving six smaller countries: Bosnia and Herzegovina, Croatia, Macedonia, Montenegro, Serbia and Slovenia. Today, the region is peaceful and thriving and is becoming a popular destination for travellers.

The area has become well-known for its diverse landscapes, mountains with thick coats of tall trees, pristine alpine lakes. Our Adriatic tours will appeal to a wide variety of travellers, from those who enjoy casual strolls in the countryside, to museum enthusiasts, foodies looking for indulgent, new conquests, deal hunters who love local markets and anyone with a taste for adventure.

Mixing East and West, our Adriatic tours reveal a region with sophisticated cities showing obvious mixed influences of older civilizations which once held sway here, more recently from the Ottomans, but stretching as far back as the Greeks and Romans.

Ancient history meets modern in Mostar, a small village in Bosnia-Herzegovina, where its iconic stone arch bridge, arcing high above the Neretva River, was destroyed in 1993 during the civil war. It has since been rebuilt, as has much of the town which was built in the 16th and 17th centuries, and returned to its original charm.

A quintessential experience comes on our Adriatic tours in tiny countries such as Montenegro, with its picturesque medieval towns hugging the rugged coastline of the Adriatic. A cultural crossroads for thousands of years, one can find mosques and their characteristic minarets, Catholic cathedrals and monasteries, hinting at the important role of religion in this region.

Croatia’s port city of Dubrovnik, with its ancient stone buildings, red-tiled roofs and streets of marble, is popular with travellers, particularly its towers and fortifications rising above the harbour. One can imagine past invading empires occupying the town, from the Ottomans, Austro-Hungarians, Napoleon and Venetians.

Exploring these Eastern European countries is like stepping back in time, with their rich histories and ruins of past empires littered across the countryside.

Whether it’s for the history, or the beautiful scenery, such as the amazing Plitvice Lakes, our Adriatic tours are travel experiences you will talk about for a long time to come.

Published on 24 September 2018
< Ten Questions for a Tour Leader: Jonathan Hodgson
Group Tours to Italy – A Gem on the Mediterranean >
Recent Blog Posts
Phaselis - Romantic Forested Ruins by the Sea
Myra - Visiting the Home of St. Nicholas
Te Moana - A Great Introduction to Tahiti
The Turquoise Coast by Boat
Fethiye to Kas - Lycian Tombs and a Great Market
French Polynesia with Adventures Abroad
Can't find what you're looking for?