The history of Borobudur as a Buddhist stupa and temple complex dates back to the 8th century. This UNESCO World Heritage site is located in central Java, Indonesia. 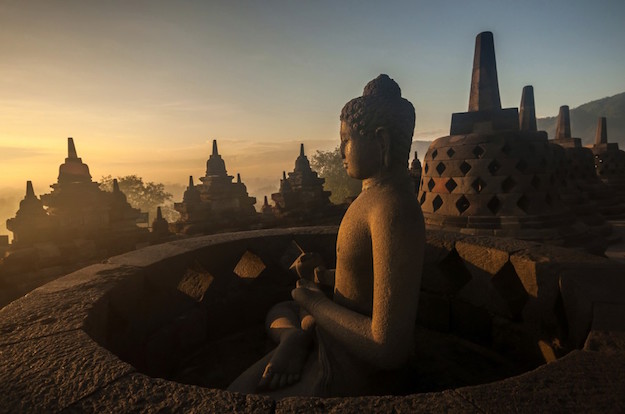 Considered by many to be an outstanding ancient site, it is actually the largest Buddhist structure on the planet. The scale and minute details of its construction almost never fail to leave visitors in awe.

It is a focal point in the lush Kedu Plain, overshadowed only by the active volcanoes that form its backdrop.

The origins of Borobudur are hazy, as there is no written record to substantiate who the builders were, or why they chose to build it, but theory is that it was chosen in the 8th century as a religious site. This would have been at the apex of the Sailendra dynasty located in central Java, Indonesia.

Construction of the sprawling religious complex is believed to have taken at least 75 years, with its completion date estimated to be 825 CE (AD).

At some point in the past Borobudur was abandoned, but no one is sure precisely why, and it was slowly reclaimed by the thick jungle around it, as well as volcanic ash from the nearby volcanoes. Some theories suggest that it was abandoned in the 15th century as the local population began converting to Islam.

Another theory holds that it was a sizable volcanic eruption which drove worshippers away from the site, swallowed up by successive layers of ash. Though abandoned, stories of this epic Buddhist monument continued, with it never being completely forgotten.

Borobudur’s rebirth began in 1956, when UNESCO started the process of assessing the Buddhist site with an eye to fully restoring it to its former glory. It took until 1968 for this work to start, when the restoration plan was fully formed, and the process was not complete until 1983.

This complete overhaul involved a variety of operations, including stabilizing the foundations of buildings, doing a detailed cleaning of everything on the monument’s site, as well as installation of a large, thorough drainage system.

Once the work was completed on the Buddhist site, UNESCO listed it as a World Heritage site in 1991.

Both of these tours visit Borobudur: