Experiencing Vietnam’s Culture to the Fullest

Vietnam is a country of contrasts. It is also a country that stimulates every single one of the senses. Fast-changing city skylines feel miles away from the breathtaking rural villages and timeless landscapes bursting with beauty. 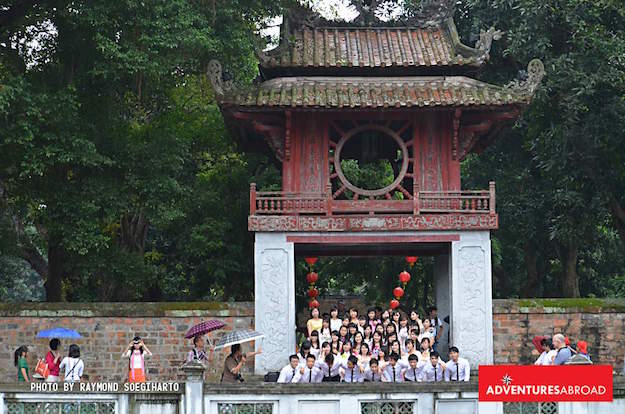 The Temple of Literature is one of Vietnam’s cultural treasures. It was built in 1070 and has been restored a number of times during its long history. You can find it at the Imperial Citadel of Thăng Long in Hanoi, Vietnam.

The country's pulse beats at a quick pace in the thriving metropolitan cities, complete with a never ending hum of moto­-taxis and lingering scent of spicy street food stalls open from dawn until well after dusk. Just the opposite: the countryside encompasses an eternal pause that could define the word zen.

Water­logged rice paddies stand still in the lines snaking through the valley floor between the karst mountains, as the sunset melts into a golden dream beyond the emerald green waters of Ha Long Bay.

Once a country so divided and overwhelming news stations with stories only of unimaginable horrors, the current Vietnam is a complete dream to travellers. Rich in both modern and ancient history, culinarily gifted, boasting surreal landscapes and a nation filled with determined people who are incredibly generous friendly and generous.

For a first timer, a trip to Vietnam can be sensory overload, so how can one experience Vietnam’s culture to the fullest? Here are three easy steps that will ensure you experience it all: Seek out the new and the old With a human history dating back 25,000 years, to say Vietnam has a varied culture is an understatement.

Throughout its years, Vietnam has been invaded or occupied by the Chinese, the Mongols, the Dutch, the French, the Americans, the Japanese, and the Chams, to name a view. While historically a nomadic people, the hill tribes of Vietnam vary greatly as well.

Even in the smallest of villages one can find several different tribes, each with its own customs. While traditional stilt houses remain intact and in use for some tribes, most of the cultures of these people are beginning to transition into a modern era in which they are more interactive with outsiders.

Perhaps the mix of historical influences is best discovered with architecture. Easily found are Japanese pagodas, Imperial “Forbidden City” characteristics fit for the Chinese emperors, Hindu temples, neo­classical lines of a French colonial opera houses or European style balconies and cafes to a distinctly Vietnamese mix of all.

Less ancient history takes one to tunnels where the Vietnamese escaped during the brutal war bombings. Everything took place beneath the soil: living, dying, weddings, and births. For the visits good for the soul, one can seek an abundance of religions. Roman Catholic churches brought by the French, delicate temples dedicated to Hinduism created by the Chams and 20th-century icons of the eye used in humanistic religions popularized by the mass following of dispossessed peasants.

With a small group tour, the sensory overload of new and old is easily broken down to understand and appreciate both the large and grand sites and the small unexpected ones. Eat everything.

Ask the most seasoned of Vietnam travellers what their favourite part of Vietnam is and the food experience will likely be at the top. From the fresh fruit and fish markets, the outdoor street vendors with plastic chairs and hot soup, to the upscale restaurants with million-dollar views to sip rice wine from or the small cafe serving French baguettes, ­ there are plenty of options to choose from.

Try to indulge in the pho (soup) and taste the difference between the Chinese-influenced variety in the North, the spicier take in the South, and the more complex soups with more herbal infusions in the coastal areas.

You’ll be hard pressed to escape without testing a seafood dish and the coffee lovers will relish a cup perfected after being brought over in the early 1800s during the French colonial era. With a tour, your taste buds will have a variety like never before and each meal planned to show you the best flavours to represent the country.

Learn from a local It’s no secret that those who live in a place know it better than any outsider can. With a small-guided group tour of Vietnam, you’ll be taken on a journey to explore both the old and the new.

Guided visits to museums, world heritage sites, cities, national parks, rural villages and more. This makes it one of our top destinations for seniors or those looking for a richer cultural experience. Meals will be in local establishments, not hotel buffets, and with a small group you’ll be able to move easily within the at times chaotic cities.

You’ll always be able to hear the guide, the pace will always be mindful of rest time that allows you to have some independent time to explore and soak up all the first-hand knowledge you’ll learn along the way. Take a tour of all the highlights of Vietnam to best experience its culture. Every one of your senses will thank you.

If you're keen to experience Vietnam's culture, check out one of our popular Vietnam tours.

Published on 22 January 2016
< Upcoming Tours
Why Greece is the Perfect Family Getaway >
Recent Blog Posts
Phaselis - Romantic Forested Ruins by the Sea
Myra - Visiting the Home of St. Nicholas
Te Moana - A Great Introduction to Tahiti
The Turquoise Coast by Boat
Fethiye to Kas - Lycian Tombs and a Great Market
French Polynesia with Adventures Abroad
Can't find what you're looking for?